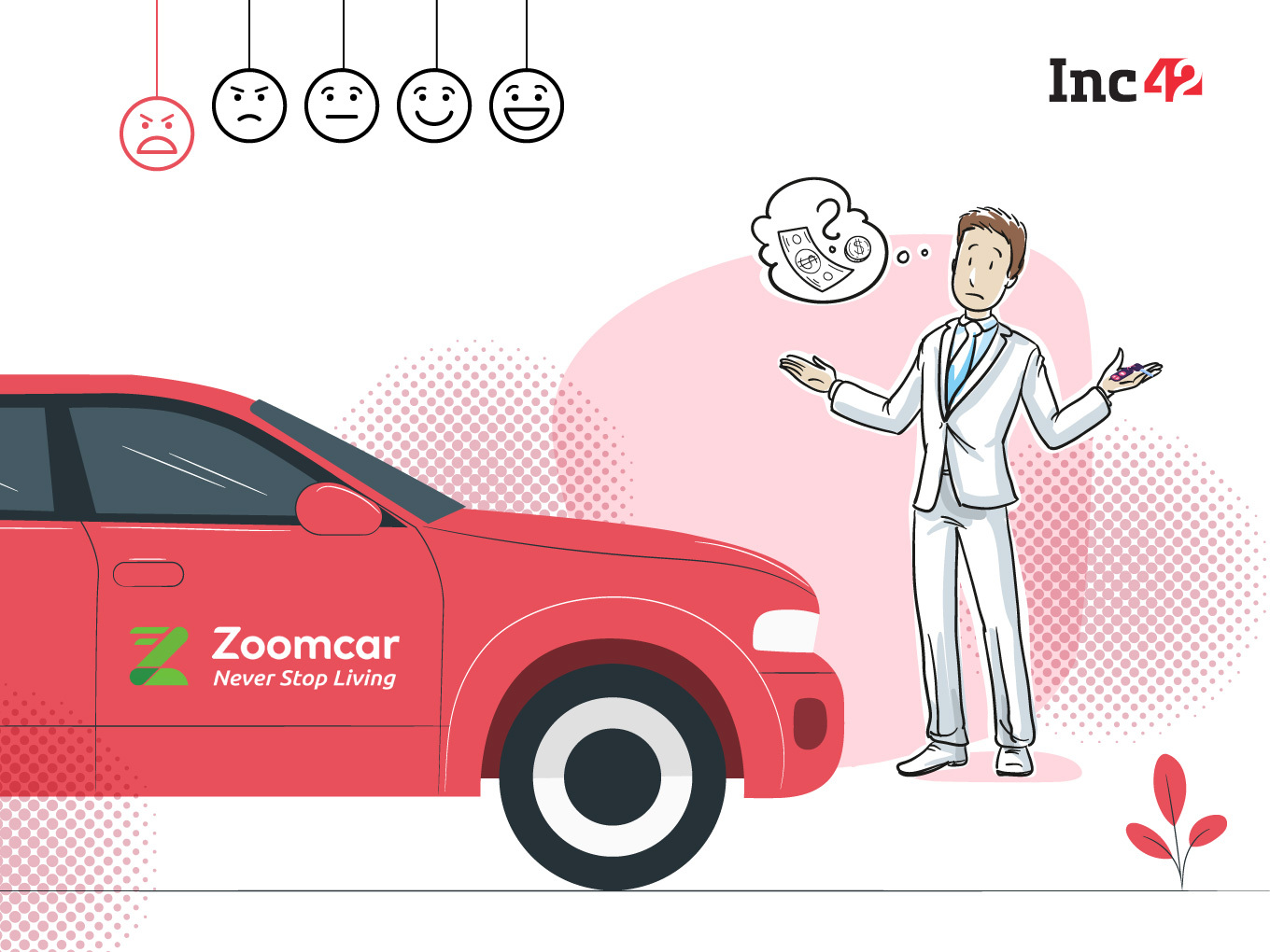 Since April, several customers have accused Zoomcar of not repaying refunds for cancelled bookings due to travel restrictions

Mobility has been one of the worst-hit sectors in the pandemic. From the shutdown of metros and local trains to air travel and even everyday cabs and autos — pretty much everything has been restricted or has come to a halt. However, the pandemic has also brought to light the dark side of some of the mobility services offered by startups.

While fintech startups have been caught trying to aggressively chase customers for repayments, mobility startup Zoomcar has been in the news because of multiple users making a clamour over refunds. Over the last few months, several customers have taken to social media platforms to raise their voice against the company’s delay in refunding their deposit amount after bookings were cancelled in the wake of the pandemic-induced lockdown restrictions.

However, Zoomcar cofounder and CEO Greg Moran told Inc42 he is not aware of any such issues, despite the vocal group of customers raising the issue on a near-daily basis. “Okay, yeah.. I am not really aware of any allegations…. It’s nothing I am aware of as such.”

Several customers wrote to us and have also tried to bring up the issue on Twitter, targeting  the Zoomcar India account to highlight the months of delay in refunds disbursal. Though such calls for refunds and complaints were also seen in the case of travel bookings, in Zoomcar’s case, the volume of such complaints is so high that it prompted us to take a deeper look. Some customers have even tried to file police complaints after turning to consumer forums for help.

During our research, we also came across an open spreadsheet maintained by Zoomcar users awaiting their refunds. As of June 3, 2020, the list had over 40 requests amounting up to INR 40K. Some of these users have been awaiting refunds since April. Several Zoomcar car owners have also noted that they have rarely faced such delays in the past.

The amounts pending through refunds range from INR 900 to INR 50K, but one particular case also goes up to INR 6.8 Lakh in pending refund. In response, the Zoomcar social media team has been constantly reassuring customers about the refunds coming in another two weeks, but it has been over two to three months since the customers had cancelled their subscriptions. 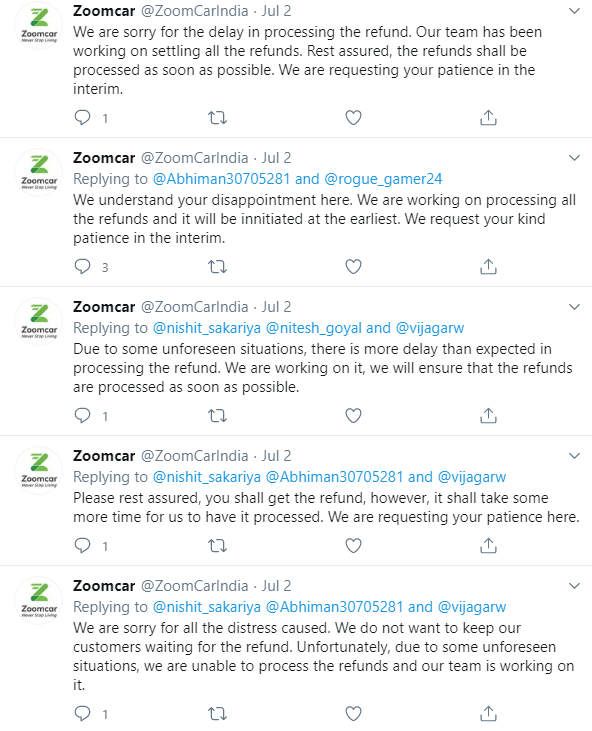 According to the Zoomcar’ refund policy, the process of refunds can range between one day to 10 days depending on the mode of payment. Usually, payments made through credit card, debit card and credit card can take between a week to 10 days.

But customers have been complaining of delayed refunds ever since the start of the Covid-19 lockdown in March. Inc42 also came across once such customer, Suvid Chaturvedi, who claimed to be a member of Supermiler’s Club, Zoomcar’s reward programme, but had not received the refund of INR 19,775 after cancelling his booking on March 25, the first day of Covid-19 lockdown. He also notes that one of his acquaintances, another Zoomcar user, had cancelled his book on the same day but received the amount immediately. “However, in my case, I have been provided with nothing but hollow promises,” the Zoomcar customer added. 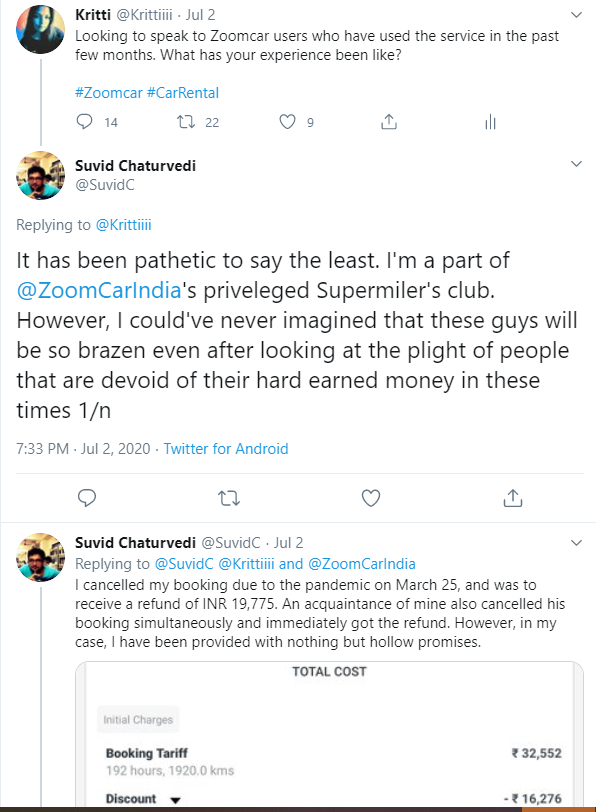 Another Zoomcar customer, Anoop Tiwari, had written to founder and CEO Greg Moran and Ketal Doshi of Mahindra Group on June 23, 2020, highlighting that he has not received INR 6.8 Lakh refunds after more than 70 days of cancelling four bookings. The same user had also reached out to Inc42 on June 26, upon receiving no response from the CEO Moran. However, Moran told us that he had not received any such email for such an amount.

Without commenting on any specific customer, Moran clarified that refunds process carried depending on the ticket size of refund as well. The process may be quicker in smaller cases than in larger ones. He noted that some of these cases require certain signatures, sign offs system procedures and protocols. Besides this, the condition of the car and other factors will also be taken into consideration while issuing the refunds.

However, talking about the INR 6.8 Lakh refund owed to Anoop Tiwari, Moran said, “I can definitely tell you that – assuming a typical average booking size is INR 3K. There is never really an instance where, you know, we’ve heard so much about that number,” adding that if the customers’ bill went up to that amount, it must be in some other “coin” or currency.

The bills from Zoomcar accessed by Inc42 confirm that the amount was INR 6.8 Lakh but that’s after the customer — Anoop Tiwari — had cancelled multiple transactions (ranging up to INR 1.67 Lakh) due to car preference.

We have also compiled a list of such tweets and complaints against Zoomcar for the readers’ references. You can go through them here.

However, before we could dive further into the details of the refunds, financial situation at Zoomcar and other factors that may be delaying the refund, Moran abruptly disconnected the call without responding to the questions.

As stated earlier, Moran also claimed to be unaware of the refunds being demanded by customers. While we agree that CEOs may not be privy to every customer and their transaction, the last two months have pretty much been only about cancellations, even amid Zoomcar’s efforts with supporting frontline workers. With cancellations at their peak, most mobility startups, as well as online travel agents, have only been dealing with refunds.

Soon after the abrupt end to our conversation with Moran, Zoomcar shared this statement with us: “We cannot comment on individual cases. While the Covid situation has presented us with logistical constraints we maintain our position of full customer transparency and work continuously to provide them best in class experience. Since our inception in 2013, we have earned and maintained the trust of lakhs of customers and continue to do so in 45+ cities with a fleet of over 10,000 cars. We are humbled to remain the most seamless, frictionless and user-friendly personal mobility experience for customers in the country.”

Is Financial Crunch The Cause Of This Stress?

Zoomcar was founded by David Back and Greg Moran in 2012, since then it has raised over $151.9 Mn across 15 funding rounds from marquee investors like Mahindra and Mahindra Ltd (M&M), Innovation Fund, InnoVen Capital, Trifecta Capital, Sequoia Capital, MGP Capital, Ford Smart Mobility and others.

According to Datalabs by Inc42+ estimates, Zoomcar has raised $43 Mn in debt from investors like Trifecta Capital, Sony Innovation Fund and it’s parent entity Zoomcar Inc registered in the US.

Though the company’s financial performance for the year 2020 has not been disclosed yet, but in the fiscal year 2019, it had noted a two-fold increase in its net losses at INR 202 Cr up from INR 116 Cr reported the previous year.

However, with the Covid-19 pandemic and the resultant lockdown, the shared mobility segment has been hit hard. Besides Zoomcar, the likes of Drivezy, Ola, Uber and others in the cab-hailing or subscription-based rental models had come to a standstill.

While announcing the mass layoffs in the company, Ola CEO and cofounder Bhavish Aggarwal had admitted that his company’s revenue had plummeted by 95% in the two months of lockdown. As India is slowly revising its economy, there has been some inflow of its revenue but it seems unlikely that there will be a full recovery at this point as people are still reluctant to step up.

Zoomcar has not specified any such reason, and in a second statement told Inc42 that “Unlike several companies laying off thousands of employees, we at Zoomcar have made no job cuts nor salary cuts for any employee of Zoomcar. COVID-19 has upended the dynamics of our economy in many ways and each industry needed to adapt itself to the new normal. Even through the lockdown, Zoomcar was ensuring that mobility-as-a-service was available for anyone who needed it. We resumed operations in the last few weeks of May and are excited to see a multi-fold increase in bookings & subscriptions month over month.”