[What The Financials] Nazara Banks On Online Learning, Freemium Games After INR 454 Cr Revenue In FY21

[What The Financials] Nazara Banks On Online Learning, Freemium Games After INR 454 Cr Revenue In FY21 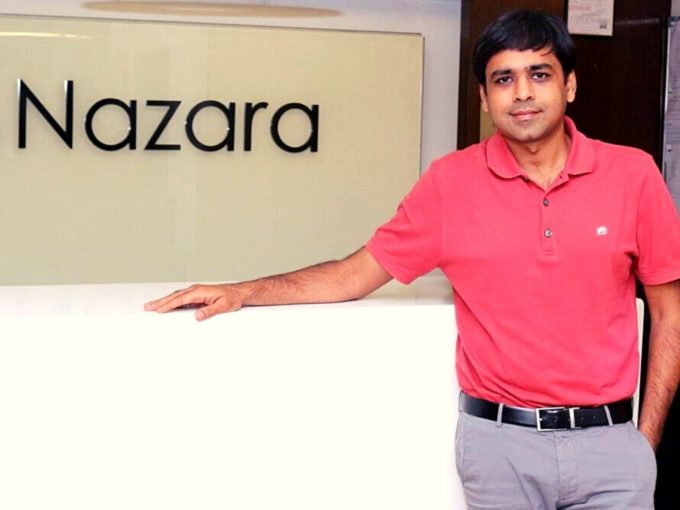 Mumbai-based online gaming company Nazara Technologies has clocked revenue of INR 454.2 Cr in the financial year 2021, ended March 31 this year. Compared to last year, the gaming company’s revenue has increased a good 84% or nearly doubled from INR 247.5 Cr revenue reported in FY20 last March. It is important to note that the figures shared by Nazara for FY21 are unaudited, so the final tally is likely to have adjustments after audit.

The company’s earnings before interest, taxes, depreciation, and amortization (EBITDA), including share of non-controlling interest for FY21, winessed 470% growth over FY20. This led to the company’s EBITDA margin expanding to 12% in FY21 from 4% in FY20. Nazara listed publicly after a successful IPO last month that saw the company’s shares being oversubscribed by 175 times.

Founded in 1999 by Nitish Mittersain, Nazara is a diversified gaming and sports media platform with a presence in India and global markets such as Middle East, Africa and North America. The company operated in diverse business segments, of which gamified learning and esports were the major sources of revenue for the company in FY21. 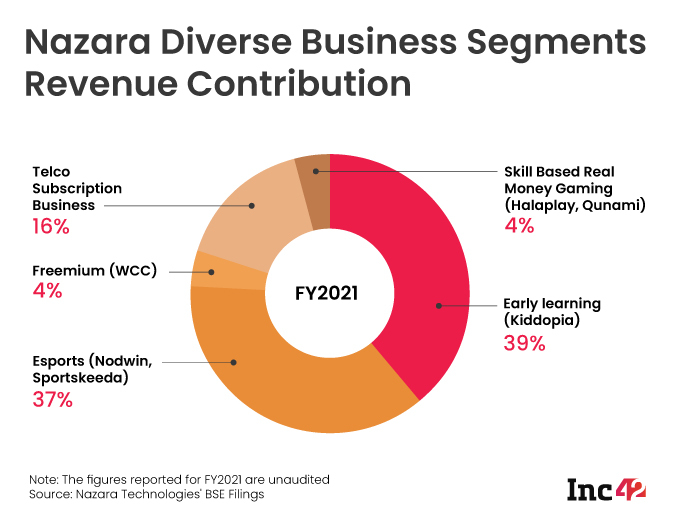 The recent regulatory filings of the company highlight that its early learning business segment through Kiddopia (Paper Boat Apps) ownership contributed about 39% of its total revenue in FY21. It was followed by esports offerings like Nodwin and sportskeeda contributing 37% of the total revenue. Telco subscriptions contributed another 16%, followed by freemium offerings like world cricket championship (WCC) and fantasy gaming through Halapay and Qunami contributing 4% each.

“Gamified learning and esports segments have not only demonstrated strong growth momentum in FY21 but have also laid foundation for predictable growth on account of proven user engagement and retention KPls in gamified learning and multiyear media licensing and game publisher agreements in case of esports,” the company has said in the Bombay Stock Exchange (BSE) filings.

The Secret Sauce Behind Nazara’s Revenue Spike In FY2021

While it is clear that the growth of gamified learning and esports contributed greatly to the 84% revenue spike in FY21, this means little unless compared to the company’s performance last year. 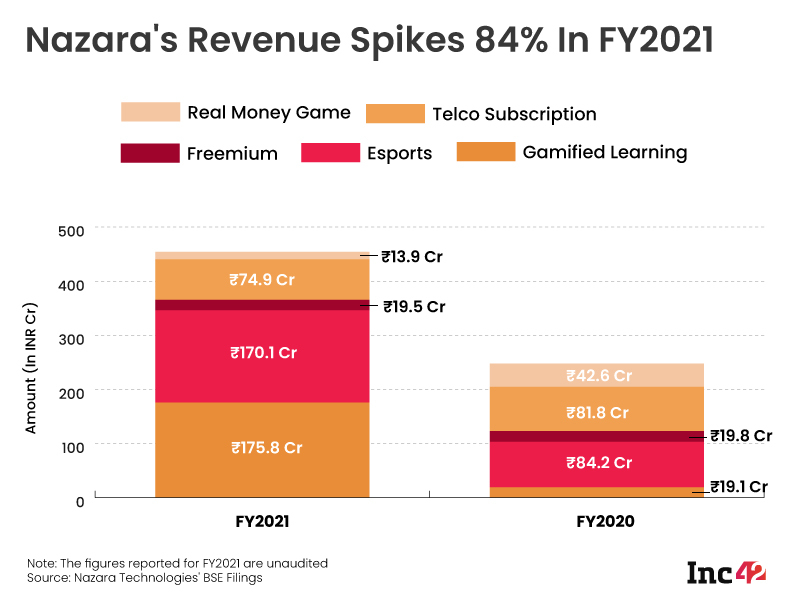 
Interestingly, Nazara’s gamified learning or early-stage learning offering has grown a massive 820% since last year, from recording a mere INR 19 Cr revenue in FY20 to INR 175.8 Cr in FY21. It had acquired Kiddopia creator Paper Boats Apps for INR 83.5 Cr in October 2019, almost halfway through the FY20. The INR 19 Cr revenue generated in the same year was essentially been accounted for from the date of acquisition in the consolidated financial statement for FY20. Separately, Paper Boat App’s overall revenue in FY20 would have been higher.

However, there is no denying that the Kiddopia business segment has grown after Nazara’s acquisition. For starters, the paying subscriber base for Nazara’s gamified learning business grew 172%, from 1.97 Lakh in FY20 to 3.40 Lakh in FY21. Meanwhile, the cost per trial (part of customer acquisition) has stayed between $22 to $26 in FY21 and activation ratio from free trial to subscription has also remained around 70%. Monthly average revenue per user for this offering has been around $6.3-$6.4 and monthly churn rate is 4%-6%.

Esports Continue To Be A Strong Pillar

SportsKeeda is a sports news and content platform, with articles, opinion pieces and forums for fans to interact with each other. The company witnessed a 487% growth in its monthly active users (MAU). During peak cricket season of October 2020, Sportskeeda recorded 68.44 Mn MAU up from 10.53 Mn MAU in April 2020.

PUBG creator Krafton-backed NODWIN, on the other hand, creates IPs, content and tournaments in partnership with global publishers and partners including ESL (formerly known as Electronics Sports League), Valve, Tencent, Riot and Blizzard. The company claims to have produced over 10,000 hours of gaming content, and organized more than 100 gaming and esports events with 100Mn viewers.

Nazara notes that NODWIN continued revenue growth momentum with 75% growth in FY21 over FY20, with media rights being the largest source of revenue for the company. The company also expanded to other parts of South Asia in the year.

World Cricket Championship or WCC is the world’s largest cricket simulation game franchise on mobile and is played for 46 minutes per day by over 15 Mn monthly active users, Nazara has claimed. The company claims that this game has a very strong franchise among the mid core gamers and gets over 1 Lakh downloads every day organically.

However, the revenue for WCC was flat in FY21 on account of drop in advertising rates in India due to Covid-induced pressure on business. The company expects slight growth to come from in-app purchases of virtual goods, so it  launched WCC3 last July. The latest version has been designed for enhancing in-app purchase conversion rates and has done so over the last year.

The company notes that the percentage conversion rate in WCC3 has increased to 0.08%-0.10% as compared to 0.01% in WCC2. It is expected to increase further in FY22 through new product updates. Once a positive customer lifetime value to customer acquisition cost (LTV:CAC) is achieved, the company will invest aggressively in user acquisition to scale up its user base on wee and drive profitable growth.


Online fantasy sports gaming was a big craze among users in India in 2020 (FY21), but it still faced legal and regulatory challenges as many people considered it as an online form of betting or gambling. To add to this, the segment also witnessed a disruption due to lack of live sports events  in FY21.

Nazara, which runs Halaplay, decided to take a strategically cautious approach in this vertical due to lack of stability in the regulatory framework and, therefore, pivoted its product driven growth strategy versus an aggressive customer acquisition spends led strategy. The company, in its latest filings, explained that the team focused on enhancing its existing as well as bringing new product features to differentiate itself in this segment. With this, the revenue from real money game fell about 67%, from INR 42.6 Cr in FY20 to INR 13.9 Cr.

Nazara’s telecom-operator driven subscription business declined by 8%, from INR 81.8 Cr in FY20 to INR 74.9 Cr in FY21, primarily due to decline in India revenues in the second half of FY21.

But there is still scope for recovery in FY22 as Nazara has acquired rights to distribute a library of premium Disney and Star Wars games based on iconic stories and characters including Star Wars, Frozen, Finding Dory, Toy Story and many others in 100 countries for three years. These premium games will be distributed through Nazara’s network of telecom operators to their customer base.

Under this agreement with Disney, Nazara is the only third-party distributor that Disney has granted the rights to create and operate Disney-themed storefronts for premium Disney and Star Wars games through telco channels.