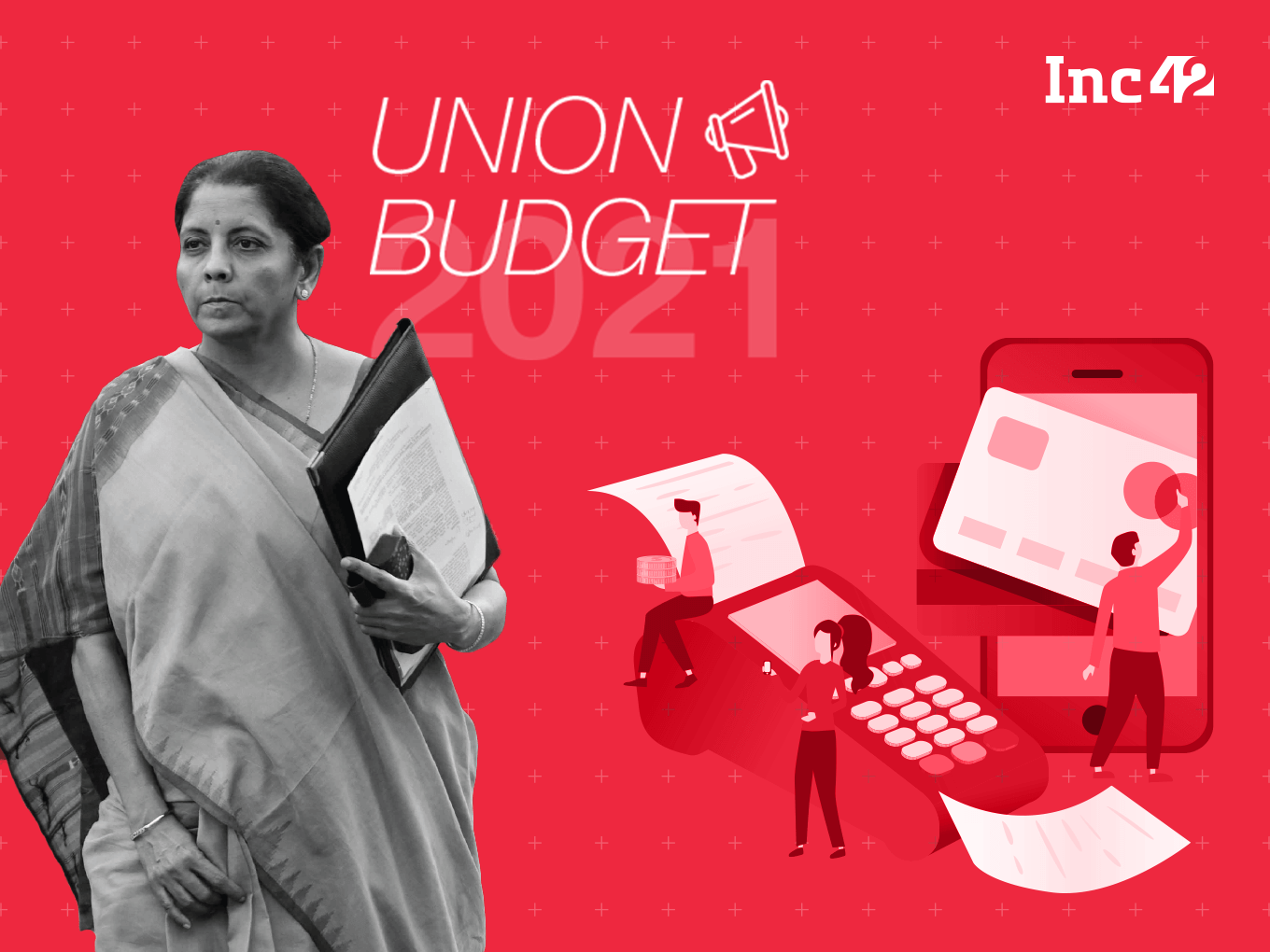 Besides a self-regulatory organisation, the government should form a Central Agency to investigate digital frauds to ensure data security and privacy

India’s fintech sector has been on a roll for sometime. In 2020, out of 900+ startup deals and $11.5 Bn total funding, fintech topped the chart with $2.1 Bn worth of funding across 131 deal counts, according to Inc42 Plus Annual Indian Tech Startup Report 2020.

Within the fintech space, payments remains the largest subsector in terms of the total number of startups.

With UPI payments leading from the front, the value of digital payments in India is expected to grow over three-folds to INR 7,092 Tn by 2025 from around INR 2,162 Tn in 2019-20, according to Bengaluru-based consultancy firm RedSeer.

However, there are a number of issues that the Indian payments industry has been facing.

Ahead of the Union Budget 2021, the industry expects the finance minister to address some of the pressing issues that halt the growth of India’s digital payments sector. Here’s a list of industry demands:

Subsidy On MDR And POS Payments

Commenting on the Union Budget 2021, Harshil Mathur, CEO & cofounder of payments startup Razorpay said, “I’m hoping that in the upcoming budget, the government will think of alternatives to the Zero MDR policy. One of the alternatives could be providing tax incentives for MSMEs towards accepting digital payments, as that will help promote e-payments and drive significant digital adoption amongst businesses. Initiatives like these will also lead to new innovations in the payments infrastructure, thereby creating solutions and tools that respond to both, shifting customer demands and need for customised solutions for MSMEs.”

The MDR (merchant discount rate) is the transaction cost paid by merchants to issuers, acquirers and merchant aggregators. In December 2019, the Indian government had introduced zero MDR for UPI and RuPay which stated that business establishments with an annual turnover of more than INR 50 Cr shall have to compulsorily offer low-cost digital modes of payment to their customers and that zero MDR shall be imposed.

While the MDR charges were nearly zero for below INR 2,000 UPI transactions since 2017, it was in December 2019, the government introduced zero MDR on UPI and RuPay transactions for businesses above INR 50 Cr of annual turnover.

But this policy has made UPI transactions a loss-making proposition for the industry.

While Ketan Doshi, MD, PayPoint India demanded that zero MDR practice must be repealed, Dilip Modi, founder of Spice Money said, “While encouraging initiatives such as PIDF by RBI have already been announced, we expect the government to announce a subsidy on MDR and POS devices in the upcoming budget. Waivers on MDR and POS are important to encourage the expansion of these services via the banking correspondents (BC) network. Accessibility of financial services is a major gap in financial inclusion, and POS terminals would be more sustainable than ATM infrastructure in semi-urban and rural areas.”

Elaborating the same, Mandar Agashe, founder, MD and vice-chairman of Sarvatra Technologies stated that the PoS terminal is financially, infrastructurally, and operationally far more affordable and far less demanding than an ATM. However, with just 4 Mn POS machines active in the country, the budget should consider giving tax incentives to banks and fintech companies on the purchase of these machines. Aghase also demanded tax breaks in GST for merchants providing digital payments and incentives for companies helping build a digital infrastructure for friction-free digital on boarding.

Remove GST On Transactions Made Through Banking Correspondents

While urban customers are reaping the benefits of UPI and mobile banking services, the Business Correspondents (BC) Industry-the last mile in branchless banking- is hoping that the upcoming budget will implement the recommendation of the RBI constituted High-Level Committee on Deepening of Digital Payments, headed by Nandan Nilekani. The Nilekani Committee had recommended making BC originated and terminated transactions of IMPS and AEPS exempt from GST. These transactions currently face GST at an effective rate of 27%.

Sunil Kulkarni, CEO and head of Business Correspondent Federation of India (BCFI) averred, “Considering the business correspondent’s fraternity serves the lower bracket of the income pyramid, the tax bracket is very high. Additionally, for better penetration of financial services to the masses, BC’s should be permitted to offer products and services of more than one or two banks. The industry has already witnessed the critical role of BC’s.”

Explaining the challenges of operating in smaller towns of India, Anand Kumar Bajaj of PayNearby said, “93% of our business correspondent network has been committed to working in tier 2 and tier 3 towns, serving as the sole point of cash disbursal in locations with limited financial infrastructure. However, the commission rates for BC services are very low to make it a profitable business. Additionally, BCs, by default, come under the 27% GST and 5% TDS on cash withdrawal even after the Taxation and Other Laws (Relaxations and Amendments of certain Provisions) Act 2020 having enabling provisions. This makes it difficult for them to stay afloat.”

The founders and CEOs of several other payments companies like Spice Money, BharatPe, RapiPay and PayNearby have also demanded some form of tax relief for the sector.

Time To Create A Regulatory Body

Since the Finance Act, 2017 proposed an independent Regulatory Board (PRB) by amending the Payments and Settlements Act, the RBI and the government have not been on the same page. Three years later, the RBI proposed to set up a self-regulatory organisation (SRO) by April 2020 to improve security, customer protection and pricing in India’s digital payment system.

The RBI, in its report, noted, “With substantial growth in digital payments and maturity gained by entities in the payment ecosystem, it is desirable to have a Self-Regulatory Organisation (SRO) for orderly operations of the entities in the payment system. The RBI will put in place a framework for establishing an SRO for the digital payment system by April 2020 with a view to fostering best practices on security, customer protection and pricing, among others. The SRO will serve as a two-way communication channel between the players and the regulator/supervisor.”

While multiple startups have welcomed this move of creating an SRO, they demand a fast implementation of the recommendation. BharatPe’s Grover thinks that the establishment of a regulatory body that can report and manage the malpractices existing in the segment is the need of the hour. “I think that the government should explore the option of forming a Central Bureau for investigating digital fraud, develop a centralised system for reporting fraudulent practices and ensure data security and privacy for the industry and consumers.”

Rajeev Agarwal founder and CEO of Innoviti Payment solutions averred that since most fintechs are creating value by adding services on top of rails built by banks, the government should explore setting up a central, aggregated certification agency, that can certify fintech applications across all banks, providing them with the flexibility to choose the rail, while minimizing the expense they need to incur in carrying out multiple certifications. “This will also allow for a superior quality-of-service (QoS) norm in financial services from banks in the long run, as players can easily switch between the banks based on QoS.  This in turn will lead to better pricing, increased competition, and lower cost of service for end consumers,” he said.

Besides the Digital India campaign, the Modi government has taken a slew of initiatives such as demonetisation, GST, DBT (Direct benefit transfer) and Fastag, which have helped push digital payments in a big way.

Agreeing to the exponential growth of digital payments, Narayan ‘Naru’ Ramamoorthy, chief revenue officer at Global PayEX, however, thinks that there is a lot that still needs to be done to promote adoption of AI.

AI can digitize B2B processes at scale – speed, costs, and productivity. Companies doing business in India have a tremendous opportunity to leverage AI across the B2B process flows, right from purchase order (PO) to payments and reconciliation. While e-invoicing is a great first step by the Government of India which will enable AI-led digitisation of invoice acceptance and reconciliation processes for buyers, the next step is to enable tracking payments.

“If payment data becomes available, AI can help track key metrics, such as Days Payments Outstanding (DPO) and Days Sales Outstanding (DSO) across receivables and payables and start providing actionable insights for companies and the economy as a whole. This will also help address the key issue for MSMEs– getting paid on time, besides enabling digital lending through cash flow, payment, and invoice data,” said Ramamoorthy.

Under the Payments and Settlement Systems Act, an RBI-regulated electronic platform called Trade Receivables Discounting System (TReDS) has been introduced for facilitating the financing / discounting of trade receivables of Micro, Small and Medium Enterprises (MSMEs) through multiple financiers. While MSMEs can participate as sellers, corporates, government bodies, PSUs and any other entity can participate as buyers on TReDS. The platform not only helps bring in the buyers and sellers together but also digitises the entire payments structure for MSMEs, ensuring easy access to the working capital loans for them.

However, MSMEs need a further push to adopt the TReDS platform for e-invoicing purposes, feels Ketan Gaikwad, the CEO and MD of RXIL. According to Gaikwad, “We expect the amendments to Factoring Act to be passed and NBFCs other than NBFC-Factors to be allowed as financiers on TReDS. This would open up TReDS for a vast number of MSMEs on whose lower-rated buyers, the legacy financiers were not comfortable placing bids. Another important change we are counting on is the time-bound integration of e-invoicing & GST.”

Sarvatra’s Agashe on the other hand, demands the creation of a dedicated fund to strengthen the digital infrastructure of co-operative banks across the country. This fund will offer a big boost to a more inclusive financial system. “Budgetary concessions such as a GST waiver for digital transactions along with incentivisation, especially in semi-urban and rural India will further augment cashless payments, adds Agashe.