BYJU’S is now the second-most valued Indian startups, after its recent Series F round

Overall, $653 Mn was invested in Indian startups across 18 deals this week 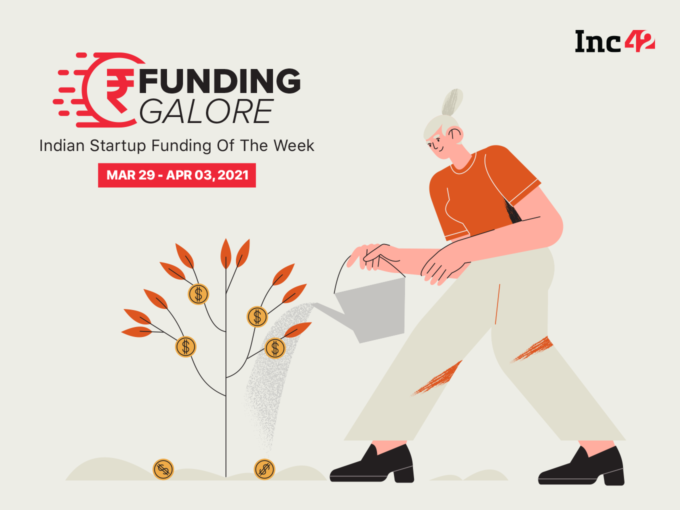 This combination of downward trend in the funding amount and an upward trend in the deal count can be attributed to the lower number of mega funding rounds ($100 Mn and above) recorded in Q1 2021. There were only eight mega rounds in this quarter, which is 20% lower than previous quarter’s (Q4 2020) 10 and 27% lower than Q1 2020 that recorded 11 deals.

This week, gaming company Nazara Technologies made a strong debut on the stock exchange on March 30 as its shares jumped to INR 1,918 on the National Stock Exchange (NSE) versus the issue price of INR 1,101, representing a 80.74% premium. On the Bombay Stock Exchange (BSE), the company got listed at INR 1,971, translating into a 79.02% premium.

With this, Nazara Technologies has become the first gaming startup to be publicly listed in India and the sixth largest stock bet in terms of valuation. The company, founded by Vikash Mittersain and Nitish Mittersain in 2000, counts Indian investor and trader Rakesh Jhunjhunwala as an early backer. Jhunjhunwala had invested INR 180 Cr in Nazara back in 2008 and owns about 10.82% stake in it. His stake is now valued at INR 656 Cr.

The company’s initial public offer (IPO) had opened on March 17 to March 19. Across the three days, Nazara Shares were subscribed over 175 times. The portion reserved for qualified institutional buffers (QIB) was subscribed 104X and that for retail investors was subscribed 75X.

Edtech giant BYJU’S has now become the second highest-valued Indian startup, after raising $460 Mn as a part of its ongoing Series F round at a valuation of $13 Bn. The round was led by MC Global Edtech Investment Holdings with participation from Facebook cofounder Eduardo Saverin’s B Capital and others. Tiga Investments, TCDS India LP, Arison Holdings, XN Exponent Holdings, Baron Emerging Market Fund and Baron Global Advantage Fund also participated in the round, together picking up 1.21% stake in the company.

BYJU’S doubled its valuation last year, from $6 Bn to $12 Bn in less than 12 months, which included multiple acquisitions. The latest round represents a 2.1X or 116% increase in the company’s valuation from $6 Bn at the end of 2019 to around $13 Bn now. In case, the company manages to hit a $15 Bn valuation, it would represent a 150% increase.

Overall, about $653 Mn was invested in the Indian startup ecosystem across 18 deals.

American ecommerce giant Amazon has acquired Bengaluru-based retail tech startup Perpule for about $14.5 Mn (INR 107.6 Cr) in an attempt to step up its game in the Kirana-tech space.

The overall deal is pegged at about $20 Mn (INR 150 Cr) as Amazon is expected to pay additional remuneration to Perpule’s employees as per two individuals aware of the discussions. Besides this, the acquisition is expected to provide Perpule’s investors —  Prime Venture Partners, Kalaari Capital, Venture Highway and TaxiForSure— an exit with a 4X to 5X return.

Fintech platform for gold loans Ruptok has acquired Mumbai-based Vinrak Technologies, which owns the brand GoldUno, in an all-stock deal. The acquisition will help GoldUno expand its presence in umabi and offer logistics and technology solutions for gold loans at competitive prices to financial institutions.