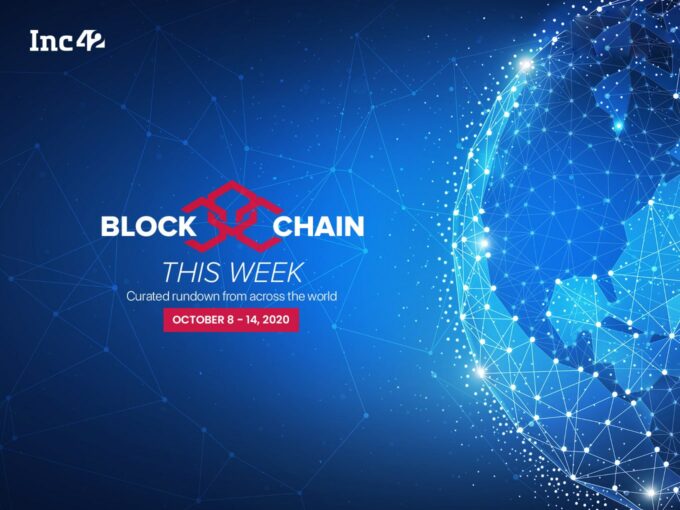 According to auditing and consulting firm (PwC) PricewaterhouseCoopers’ ‘Time For Trust’ report, the blockchain technology is said to boost the global economy by $1.76 Tn, contributing about 1.4% of global GDP and creating 40 Mn jobs by 2030. Further, the report stated that blockchain will make the biggest impact on Asia’s economy with China, India and Japan driving adoption in the region.

While China stands to gain the highest potential net benefit at $440.4 Bn, followed by the US at $407.2 Bn, India is estimated to benefit by more than $62.2 Bn in the same period, the report added.

In addition to this, the report also highlighted the potential areas of blockchain generating economic value, including product tracking and tracing ($962 Bn), financial services and payments ($433 Bn), identity security and credentials ($224 Bn), contracts and dispute resolution ($73 Bn), customer engagement and reward programmes ($54 Bn). Plus, sectors like public administration, healthcare and education are expected to benefit the most ($574 Bn increase in the next ten years).

In addition to this, Jio also said that it is rolling out high speed, low latency, optic fibre network to more than 50 Mn homes and premises across 2000 towns and cities in India, alongside plans to roll out 5G services across India.

At ‘The Product Summit 2020,’ hosted by Inc42 and The Product Folks, Manish Gupta, Sr. Director & GM – DCCS, talking about the emerging technologies in the Indian tech landscape during the ‘Creating a Digital World – Role Of Emerging Technologies’ session, noted that blockchain technology peaked 21% interest, while cybersecurity, IoT, multi-cloud and AI garnered 58%, 48%, 44% and 40% interest among the enterprises looking to adopt to digital solutions.

According to PwC latest global blockchain report, India is expected to touch $62.2 Bn by 2030, growing at a compound annual growth rate (CAGR) of 0.8%, compared to China, where the total blockchain impact is expected to reach $440.4 Bn in the next ten years. It has to be noted that China is going to touch $66.6 Bn by 2024, while India is going to take ten years to achieve the same impact. 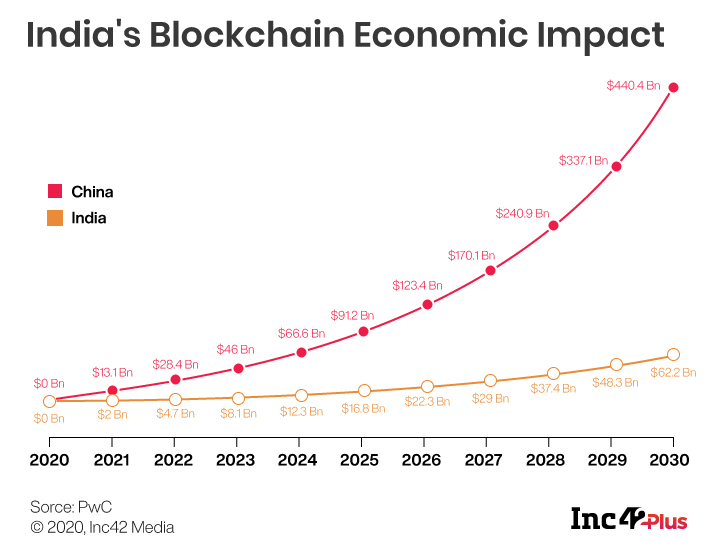 In a bid to fuel e-governance in the country, several state governments, including Karnataka, Maharashtra, Telangana and Tamil Nadu are developing ‘global-standard e-governance projects’ in line with citizen service delivery (CSD) by leveraging emerging technologies such as blockchain, AI and others.

According to an ET report, some of the state governments government-to-citizen (G2C) projects include Karnataka’s blockchain-based e-attestation; Maharashtra’s multiple pilots using big data and blockchain; Telangana’s real-time digital authentication of identity (RTDAI) powered by AI, ML and deep learning; and Tamil Nadu’s use cases based on IoT, AI and chatbot.

In other words, the health ID system developed on Hedra Hashgraph enables home Covid-19 testing on a mobile phone, where the digital health IDs can be used to authenticate and securely log real-time Covid-19 diagnostic test results and vaccination records, while preserving end-user privacy. The company claimed that major employers have already signed up to roll out the SAFE HealthCheck app to their workforce, so they can receive real-time, verifiable results via their SAFE ID.

Sharat Chandra, blockchain evangelist and Hashgraph ambassador told Inc42 that the next generation DLT Hashgraph with privacy by design and scalable ordering services is well-positioned to address public health challenges at scale. Further, he said that the Consensus Service by Hedra enables the validity and order of test results in a secure and timely fashion.

“The health status verification system for ticketing and access control systems to validate vaccination and test records in real-time would be helpful in resumption of economic activity as the new unlock guidelines permit opening of cinema theatres and physical events,” suggested Chandra.

Advisory giant KPMG last week announced the launch of its new patent-pending blockchain-based Climate Accounting Infrastructure (CAI), which aims to help organisations accurately measure, track and report their greenhouse gas emissions in real-time. The CAI is said to be integrated with the organisation’s existing systems, including IoT sensors, with external data sources to establish a verifiable trail of emissions and offsets recorded on the blockchain.

Arun Ghosh, blockchain leader at KPMG US, in a press statement, said that as investors widen their focus beyond financial factors to include environmental, social and corporate governance (ESG) practices, organisations are increasing efforts to reduce carbon footprints, alongside transparent disclosure of progress. Further, he said that CAI will provide trusted and transparent reporting capabilities which will be critical to meet stakeholder expectations and to comply with emerging regulations.