VCs Vs Founders: Passing Around The Corporate Governance Buck

VCs Vs Founders: Passing Around The Corporate Governance Buck

Sequoia’s thoughts on corporate governance has not only pulled the spotlight to this topic, but also given it a stage and an audience

Over the past few months, we have been tracking due diligence and corporate governance, well before these two became a fashionable discussion point in the past week. Sequoia India’s blog post on the errant and untruthful behaviour of some founders in its portfolio has not only pulled the spotlight to corporate governance but also given it a stage and an audience.

Now the VC has spoken publicly about the problem, however, at the same time, there’s also a feeling among other investors that there’s a lot more to be said about corporate governance.

As usual, we’ll jump into the story after a brief pitstop at the other top stories this week:

BharatPe, Trell, Zilingo, Infra.Market — some of the biggest startups from India are facing the heat when it comes to either corporate governance issues, or mismanaging funds, or tax and other regulatory issues. So it was no surprise that Sequoia India released a blog post outlining how it looks at the matter. After all, BharatPe, Zilingo and Trell are some of the biggest Sequoia portfolio companies.

After reports of issues at multiple Sequoia-backed startups, the VC firm clarified in its blog that these issues are not because of a lack of due diligence, but that investors even at the late stage can be surprised by ‘wilful fraud and intent’.

“We will continue to respond strongly when we encounter willful misconduct or fraud,” Sequoia added, but more than one investor we spoke to felt that the VC giant was just washing its hands off the issue.

Sequoia’s Legacy And Its Stance

The post saw a slew of reactions and sharp takes on social media with everyone from Info Edge chairman Sanjeev Bikhchandani to many Sequoia portfolio founders, with a range of opinions about how founders should approach corporate governance. 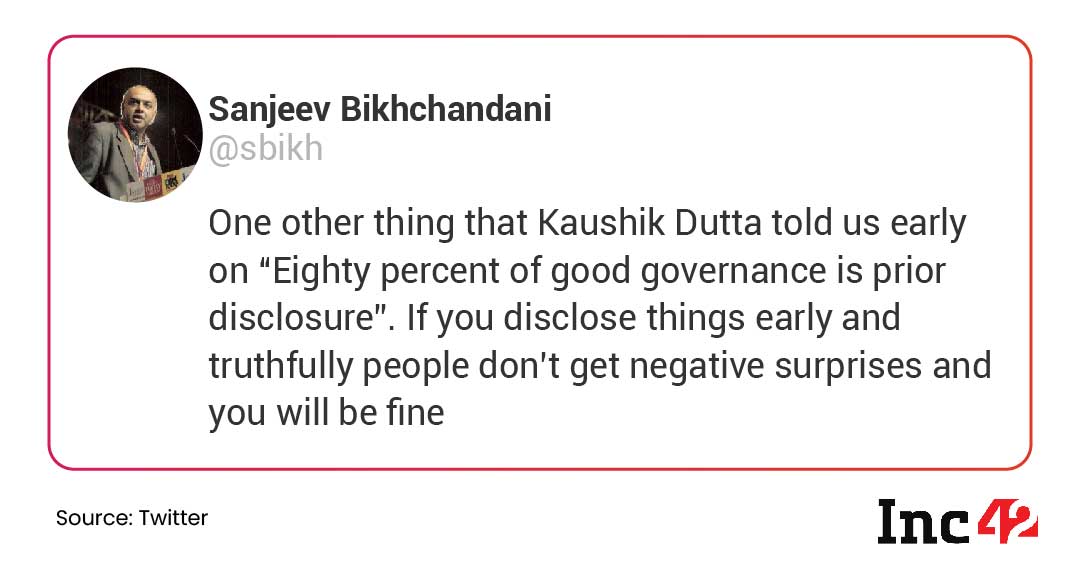 While many did not speak out in public, in private, investors said that the responsibility of the board cannot be ignored at the same time.

A founding partner of a Mumbai-based early stage VC fund said, “We can understand when the portfolio is small or very select. But this is Sequoia with hundreds of companies in its portfolio. It has a huge presence even in early-stage investing. How can it claim that founders are at fault this late in the game?”

It’s not one or two companies where Sequoia is fighting fires, and it has invested in later rounds in some of the companies currently under the scanner. Even though it claims that at an early stage there’s not much of a business to diligence, that cannot be claimed for Series C and Series D and beyond, when hundreds of millions are typically invested. 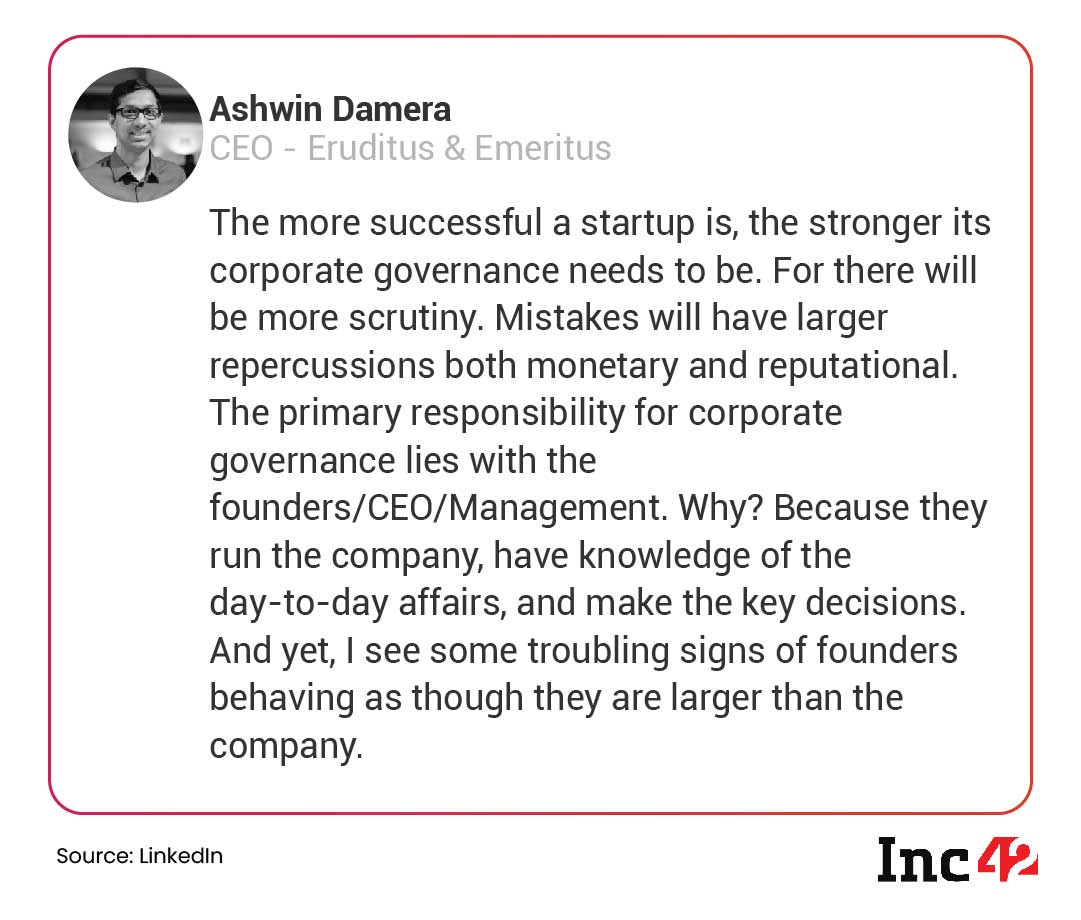 “It’s understandable that one founder may have an issue, but this points to a problem with processes,” a partner at a Delhi NCR-based VC fund told us.

Corporate governance is not simply an ideal to strive for, it’s actually part of building trust with the market. In the case of large public corporations, the corporate governance measures are taken seriously, because it can have a direct impact on shareholder value, but in private startups, the valuation game often blinds investors.

Plus, there’s the factor of the investor pool expanding in India over the past couple of years. Even creators and influencers are now investors — does that mean they are turning a blind eye to some of the unsavoury practices?

Another Mumbai-based investor believes that smaller, early-stage investors have never really had much say anyway. It’s the large VCs that have always asked startups and founders to set up the right and transparent processes. But in the mad rush for capital, a lot of the checks and balances are being ignored.

The investor, who is a partner at a VC firm, added that FOMO is a rather influential factor — no one wants to miss out on the upside due to the Power Law in VC investing, which means only a few bets will pay off.

What About Backing Founders?

This FOMO was only heightened in the past couple of years. The intense race to grow and expand and capitalise on the pandemic’s impact on consumers and businesses has led to perhaps less intense scrutiny.

Of course, the other side of the equation in this case are founders. While Sequoia has had its say, the founders of its portfolio startups such as BharatPe, Zilingo, Trell and others have also taken some steps. In the case of both BharatPe’s Ashneer Grover and Zilingo’s Ankiti Bose, the founders have challenged the legality of internal reviews, while Trell’s Pulkit Agrawal had also questioned investors in a letter.

A justifiable demand is that transparency be extended to the actual reasons behind many of the investigations, if indeed investors are serious about being stringent in due diligence and corporate governance areas.

The Best Of The Makers Summit 2022

As promised, TMS 2022 brought the brightest and most successful product leaders and startups together for India’s largest conference. Here are the highlights from Day 1:

🏗️ Zoho’s Product Secrets: CEO and Cofounder Sridhar Vembu reveals Zoho’s secrets to building great products, why privacy matters and why the company has chosen to stay away from public markets

⚗️ Dunzo’s ESG Formula: Instant deliveries and dark stores are the basic ingredients for quick commerce, but for Dunzo and cofounder Kabeer Biswas it’s not just about customer convenience, but also a responsibility to its delivery fleet and the planet.

Plus, sessions on how India will embrace NFTs in gaming — featuring WinZO’s Paavan Nanda and Nazara’s Nitish Mittersain — and the potential for the metaverse to change ecommerce, as per Meesho’s Sanjeev Barnwal.

Missed any The Makers Summit 2022 sessions? Head to the Makers Academy to rewatch them. 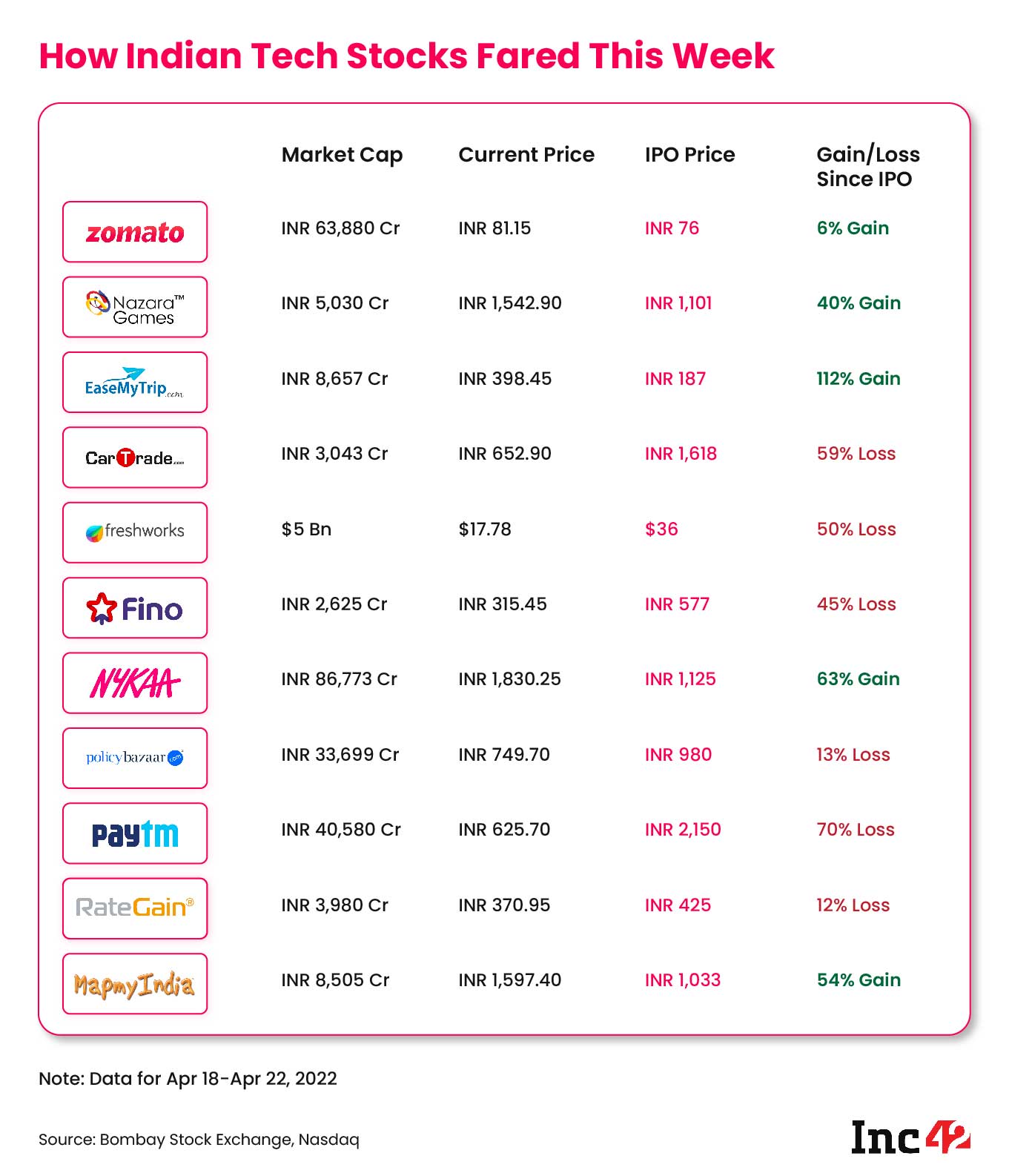 Funding for Indian startups continues to decline on a week-on-week basis in April. In the third week of the first month of the new fiscal year 2022-23, Indian startups raised $532 Mn, which is the same amount that was raised in the previous week. The number of deals also stagnated to just 30 this week, with 10 M&As recorded.