Is IPO Frenzy In The Indian Startup Ecosystem Hitting For A Reality Check?

Is IPO Frenzy In The Indian Startup Ecosystem Hitting For A Reality Check?

As of December 2021, around 15+ startups announced their plans to float IPOs, yet the noise is missing on the stock exchange floors

High market volatility, global economic crash downs, persistent fear of the next wave of COVID are among the factors pushing companies to keep their IPO plans on hold

Some of the most expected IPOs of the year are MobiKwik, ixigo, PharmEasy, Delhivery and Pine Labs among others

These startups together raised over $7.36 Bn through the public markets. In fact, according to Inc42, the median amount for IPO fundraise in 2021 stood at $409 Mn, with an average of $669 Mn raised through stock market listings.

With issues sizes of millions of dollars and mixed reactions from the market, these listings set the tone for the ongoing financial year 2022-23. As of December 2021, around 15+ companies/unicorns announced their plans to float IPOs or offer for sale (OFS) by 2022-2023.

However, a quarter of the year has gone by, and still, there has been no noise on the stock exchange floors. On the contrary, we have been hearing about the change in power dynamics, founders dealing with nuances of the other side of going public as well as some facing the bitter truths in an attempt to prove their worth and explaining the red marks on the business and investor front.

While the tech stocks have been an attractive investment in 2021, the downward whirlwind caused by newly listed internet startups stocks such as Zomato, Paytm, PolicyBazaar, Nykaa among others has made investors opt for a cautious approach. 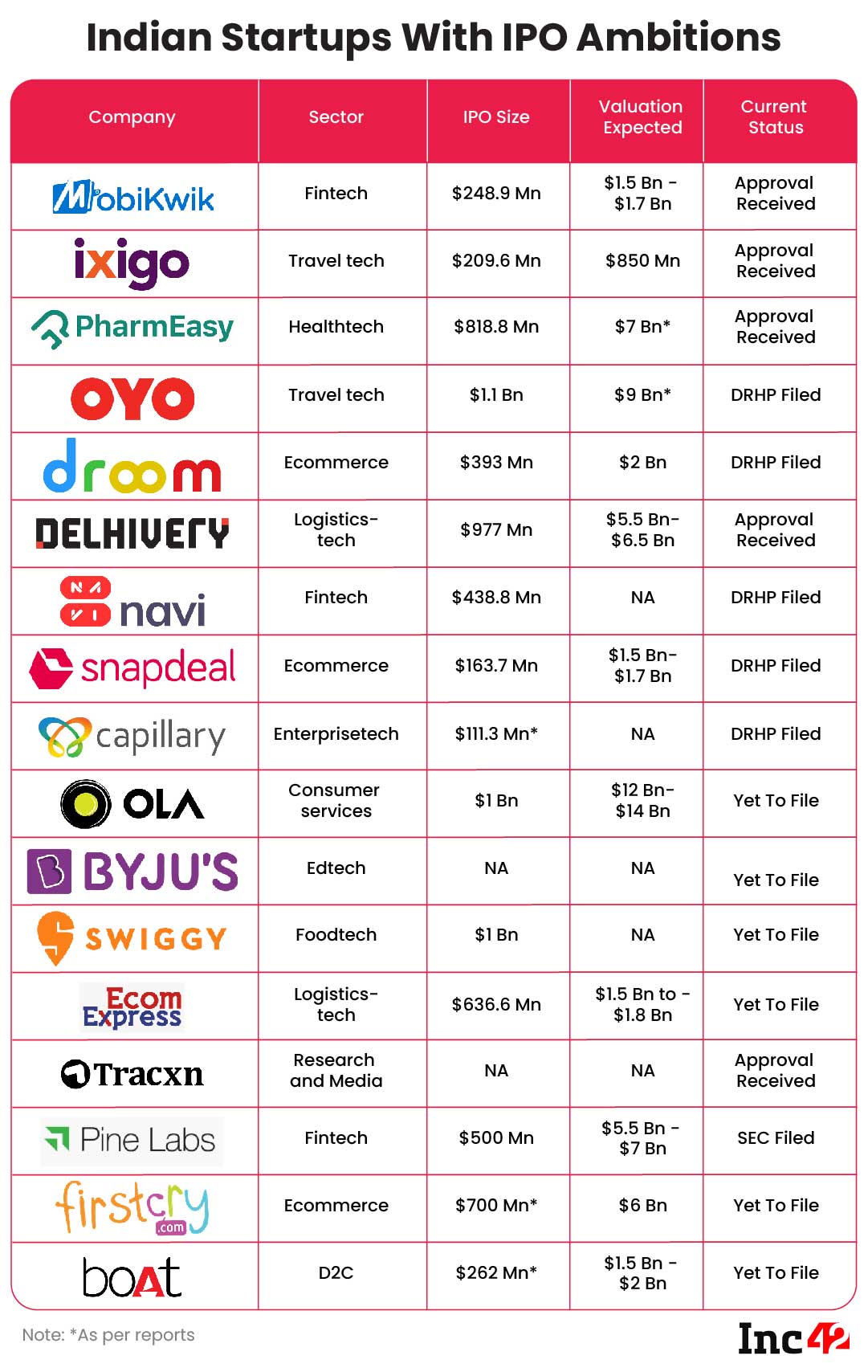 Here’s a quick update on what’s the current status of these companies’ IPO plans and what the current market and industry sentiments are.

“The company’s initial public offer (IPO) is a monumental opportunity for the company and (it) will not like to hit the market when it is behaving erratically but wait for the market condition to stabilise,” Mobikwik chairperson and chief operating officer Upasana Taku said in a media interview.

The first quarter of 2022 saw major global events impacting the Indian economy and markets. The fall in US markets amid the Russia-Ukraine war; a decline of $11.17 Bn in India’s forex reserves to $606.475 Bn as of April 1, 2022, the steepest fall ever; shifting of RBI’s focus towards inflation, among others, have led to even big IPOs, including that of LIC, being pushed back.

Besides, Mobikwik may also be wary of the sharp judgments of fintech industry analysts as well as investors after the not-so-great listing of Paytm.

Founded in 2009 by Bipin Preet Singh and Upasana Taku, the Gurugram-based MobiKwik was last valued at $700 Mn after it raised $20 Mn (INR 150 Cr) in June this year from Abu Dhabi Investment Authority (ADIA). The company is expecting a 100% revenue growth in the current financial year with a continued focus on its Buy Now Pay Later (BNPL) business arm.

Since then, its board has been working silently behind the walls with no update on the launch date for the IPO.

Following its acquisition of Confirmtkt in February 2021, the company also acquired Abhibus, a Hyderabad-based bus ticketing and aggregation platform, in August last year.

PharmEasy filed its DRHP in November 2021 with market regulator SEBI, aiming to raise up to $818.8 Mn (INR 6,250 Cr) through a fresh issue of shares. It was last valued at $5.6 Bn and was eyeing an IPO valuation of around $7 Bn to $8 Bn. It closed a $350 Mn pre-IPO funding round in October last year, taking its total fundraising in 2021 to nearly $1 Bn. Earlier in February this year, the company received SEBI approval as well.

However, the health of the company seems to have dipped thereafter. In February 2022, the company’s shares tanked to as low as INR 65 from INR 135-140 in the unlisted market. This might force the company to rework its IPO valuations, float issue on discount and even reconsider its IPO timeline.

“They (PharmEasy) continue to be in talks with marquee investors for anchor slots. Now, at what price it happens remains to be seen but there is of course a correction in tech stock,” mentioned a media report.

Overall, the analysts are optimistic about the stock. In FY20, PharmEasy doubled its revenue to $83.45 Mn (INR 637 Cr). Founded in 2015 by Dharmil Sheth and Dr Dhaval Shah, PharmEasy merged with its investor entity, Ascent Health, to form API Holdings in 2019. This brought in three new cofounders – Siddharth Shah, Hardik Dedhia, and Harsh Parekh.

In January 2022, OYO received in principle approval for listing on NSE & BSE. The company is now in the process of sharing the revised DRHP with SEBI and getting the final nod of approval.

However, not all is as rosy as it sounds. According to reports, the company is under scrutiny for its ownership structure and heavy losses and is now facing regulatory questions too. There have been questions around the failed Oyo-Zostel merger in 2016 as well.

Not only is the company looking at shelving the $1 billion IPO to half, but has also been making major leadership changes. Last month, Rohit Kapoor, the then CEO – India & Southeast Asia,  became the company’s global marketing head. Global Chief Business Officer Ankit Tandon took on the additional responsibility of Southeast Asia, with a specific focus on Indonesia and the Middle East region as its CEO. Ankit Gupta, the then CEO of Hotels and Homes – India, took on the role of CEO – India.

The hospitality unicorn may also decide to suspend its IPO plans, according to other media reports.

Founded in 2013 by Ritesh Agarwal, the hospitality giant counts Masayoshi Son’s SoftBank, NASDAQ-listed Airbnb, Lightspeed Venture Partners, Innoven Capital as investors. However, hit by the Covid-19 pandemic, the company has been struggling to stabilise its finances. In the financial year 2020-21, it reported a 54% year-on-year decline in revenue to $11.66 Mn (INR 89 Cr). It reported a net loss of $31.57 Mn (INR 241 Cr) during the fiscal, lower than $42.7 Mn (INR 326 Cr) in FY20.

The company became the first unicorn to receive a final nod from SEBI in the year 2022. The IPO was expected to hit the markets in the first week of March this year. However, the company has continued to delay its launch amid market uncertainty and the fear of colliding with other big IPOs.

Snapdeal filed for a $163.77 Mn (INR 1250 Cr) IPO in December 2021 at a $1.5 Bn valuation. There is also a secondary share sale offer by Softbank, however, the founders and other major investors such as Temasek or Blackrock will not sell their stakes.

The ecommerce startup is yet to receive the final nod from SEBI. However, the company has been under the radar of analysts for its merger fiasco with Flipkart and the pivot later in 2017.

Once a leading ecommerce marketplace with a $6.5 Bn valuation, the company is today operating as a pure play value ecommerce platform at a valuation of $1 Bn. Its SaaS subsidiary Unicommerce eSolutions Pvt. is one of the key revenue contributors to its operations.

Despite building an active user base of approximately 4 crore users, 20 crore app installs, 1.48 crore annual transacting customers and 86.93% share of sales from outside metro cities, the company is still struggling financially.

In its DRHP, the company highlighted that it may continue to see a drop in revenue and net merchandise value. It reported negative cash flows for the six months ended September 30, 2021, and FY21, FY20 and FY19.

The roadmap is still not clear for the other startups planning IPO in 2022-23. High market volatility, global economic crash downs, and persistent fear of the next wave of COVID are among the factors pushing companies to keep their IPO plans on hold.

Notably, close to 48% of the mega-round capital went to the enterprise tech sector, amounting to $2.8 Bn. Ecommerce startups received $1.9 Bn, While fintech emerged as the third biggest avenue for funding, receiving $1.8 Bn in total investment inflows in the first quarter of 2022.

At the same time, the startups are again getting back to the drawing board, with SEBI proposing new rules on the pricing of IPOs in the backdrop of the continuous fall in the share prices of listed internet startups such as Paytm, Zomato, among others, on the stock exchanges.

The regulator wants new-age tech firms to explain in detail the pricing of shares for initial public offerings (IPO), compare it to pre-IPO share sales and publish all pre-IPO investor presentations to help investors make informed decisions. This would make it difficult for loss-making startups to get a high valuation listing on the stock exchanges.

The bigger question here is: Will all these factors put together bring a pause to the IPO frenzy in the Indian startup ecosystem? Or will SEBI provide the startups with a way to list and prove their worth, and offer exit to their early investors without compromising on the interest of retail investors?