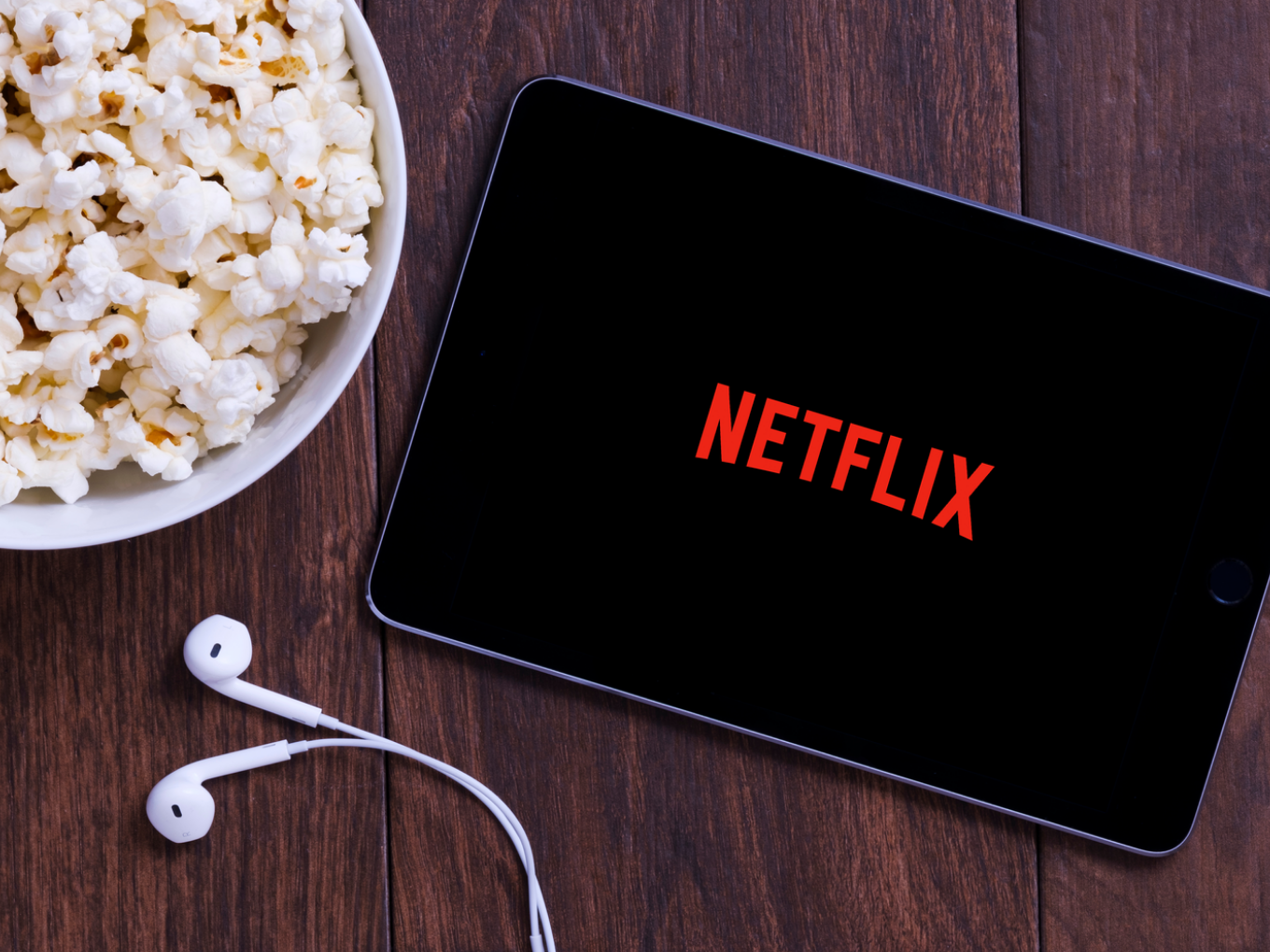 Netflix has lost 200,000 subscribers globally in Q1 but added 1.09 Mn subscribers in the APAC region

“Our revenue growth has slowed considerably,” the streaming service said in its letter to shareholders

For more than a decade now, Netflix has been perceived as the undisputed leader in streaming. Mostly, its quarter ends have reflected stories of subscriber growth, product innovation, and ambitious content strategy. In a turn of events, the streaming giant has ended its first quarter with 200,000 fewer subscribers, reporting a loss of subscribers for the first time in a decade.

Although Netflix has witnessed disappointments over its growth not very often, Netflix has not been able to steal the show in India. At a time when the Indian media and entertainment industry was just warming up to the idea of over-the-top (OTT) platforms, Netflix entered into the market in 2016.

From hiring local talents to introducing mobile-only plans, tying up with popular B Town faces, the platform has taken many initiatives for its better adoption. The streaming colossal has faced intense competition from international OTT platforms including Amazon Prime Video, Disney+Hotstar, local OTT players such as ZEE5, Voot, MX Player.

The CXOs of the video streaming company acknowledged last year that they are still figuring things out in India even as it continues to invest. “The thing that frustrates us is why haven’t we been as successful in India. But we are definitely leaning in there,” Netflix co-CEO and cofounder Reed Hastings said in the earnings call of the last quarter of 2021.

Well that was Q4 2021, the new year seems to be bringing hopes for the OTT giant. During the Q1 call, Ted Sarandos, co-CEO, chief content officer of Netflix, said that the company has seen a “nice uptick in engagement in India”.

We will delve into it later, but before that let’s take a look at Netflix’s Q1 numbers.

How Do The Q1 Numbers Look For Netflix?

“Our revenue growth has slowed considerably,” the streaming service acknowledged at the very beginning of its letter to shareholders. From $7.71 Bn in Q4 2021, Netflix’s revenue has grown marginally to $7.87 Bn in Q1 2022. The headwind in revenue growth has been attributed to intense competition and password sharing. In addition, the company has also cited macroeconomic issues such as sluggish economic growth, increasing inflation, geopolitical events in Ukraine for the slow down in its growth. “The big COVID boost to streaming obscured the picture until recently. While we work to reaccelerate our revenue growth – through improvements to our service and more effective monetisation of multi-household sharing – we’ll be holding our operating margin at around 20%,” the company said in the letter.

On the subscription side, Netflix lost 200,000 subscribers as compared to its guidance forecast of 2.5 Mn subscriber addition. As shared by the company, the suspension of its service in Russia and winding-down of all Russian paid memberships resulted in 700,000 subscriber losses. However, the company added that the main challenge for membership growth is continued soft acquisition across all regions. 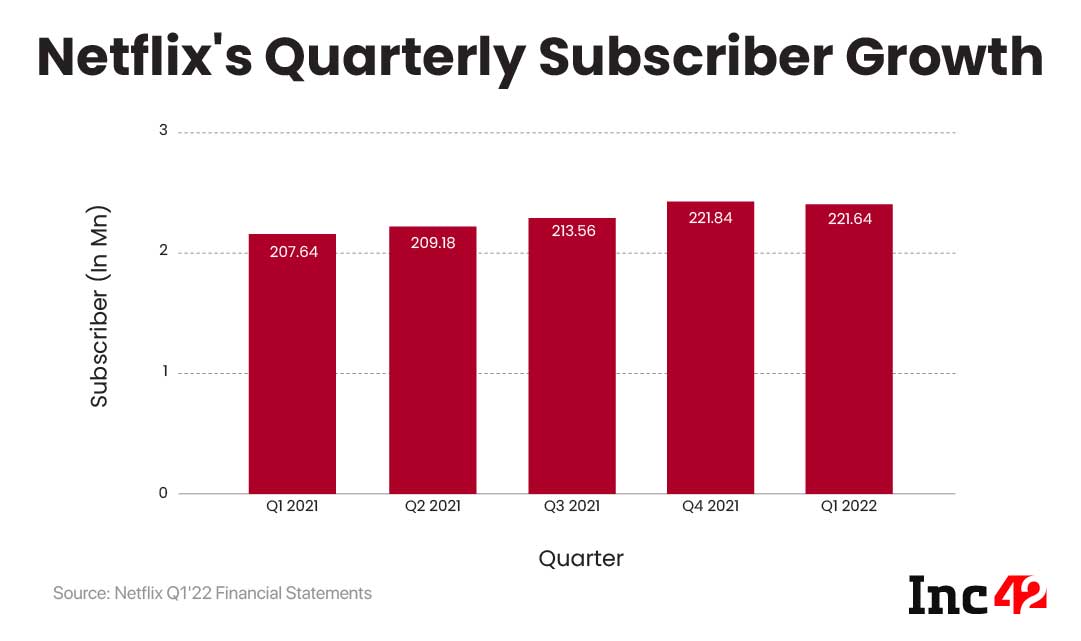 With a number of deep-pocketed players including Disney+, the streaming giant’s growth is nearing saturation in its domestic market. The company has reaffirmed that it expects its long-term growth to come from outside the US. “We’re making good progress in APAC where we are seeing nice growth in a variety of markets including Japan, India, Philippines, Thailand, and Taiwan,” the company said.

In terms of revenue and overall subscriber base, the APAC market which includes India, still accounts for a very small share. Netflix has reported $917 Mn revenue for the quarter in the APAC region. It is to be noted that the region added 1.09 Mn subscribers in the quarter, whereas all other regions witnessed a loss in subscriber base.

Back in December, Netflix India reduced prices across all its subscription plans. According to Greg Peters, COO and chief product officer of Netflix, the incremental subscribers that Netflix has attracted due to price revision, are showing similar behaviour as compared to the other subscribers added over the last 12 months. “This was a bet in terms of long-term revenue maximisation,” Peters said in a post-earnings webcast.

Despite the price cut, the quantum of subscriber growth may not be very high in India in the near future, as stated by Karan Taurani, senior vice president, Elara Capital. Taurani is of the view that the larger impact was seen during FY21 with a 60% growth in subscriber base in India when the company first introduced its mobile-only plan priced at INR 199. However, as the company has plans to introduce an ad-supported model in the next one-two year, the move may augur well for Netflix India business.

In the Q1 earnings call, Reed Hastings, co-CEO and cofounder of Netflix said that the company is exploring lower-priced ad-supported subscription plans, after years of fighting it. “Those who have followed Netflix know that I’ve been against the complexity of advertising and a big fan of the simplicity of subscriptions,” he said.

“But as much as I am a fan of that, I’m a bigger fan of consumer choice. And allowing consumers who would like to have a lower price and are advertising-tolerant get what they want makes a lot of sense,” Hastings added.

Due to the penetration opportunity, Netflix subscriber growth is heavily dependent on emerging nations. As these markets are price sensitive, the advertising-based model can boost Netflix’s adoption in the markets significantly, Taurani opined.

And Its Gaming Push To Open Up Other Revenue Streams Globally

While the announcement of an ad-supported model has come as a shocker for the industry, Netflix CXOs unsurprisingly talked a lot about gaming during the earrings call. According to Netflix’s top boss Hastings, the company has built a big capacity to offer interactive and gaming experiences.

“We think about games and delivering value to members and reflecting that back into the business through both acquisitions. So we are aiming to have titles that land, that create conversation and enthusiasm and buzz, that drive more people to sign up for the service and then obviously in retention as well,” Peters said.

The company’s foray into video games was first noticed when it hired Mike Verdu, a former Facebook and Electronic Arts executive in July 2021. Later in the year, Netflix rolled out five games marking its official entry into the gaming segment. Besides adding more titles, Netflix has recently announced that it will launch a mobile game and TV series from the same franchise, building on the popular Exploding Kittens card game.

As Netflix is a pure-play entertainment OTT platform till now, it may look like it makes no sense for them to promote into the gaming industry, as per Abhishek Aggarwal, cofounder and CEO of Trinity Gaming. But gaming adds a good market value in terms of the streaming platform’s outreach, making it a win-win situation for them, Aggarwal noted.

“Till now, Netflix has mostly not been able to attract Indian gamers as most of them have not even experimented with existing games on the app. Moreover, the games are single-player games, similar kinds of games can be downloaded from the apple store or play store. The audience is not able to connect to the gaming service they have introduced so far,” Anurag Khurana, founder and CEO of Penta Esports, said.

For the Indian market, the gaming strategy is not going to have a major impact in the short-term, according to Khurana. In the Indian context, adding more local entertainment content is currently viable for them for user retention and engagement, he said.