The Past, Present And Future Of Edtech Startups

The Past, Present And Future Of Edtech Startups 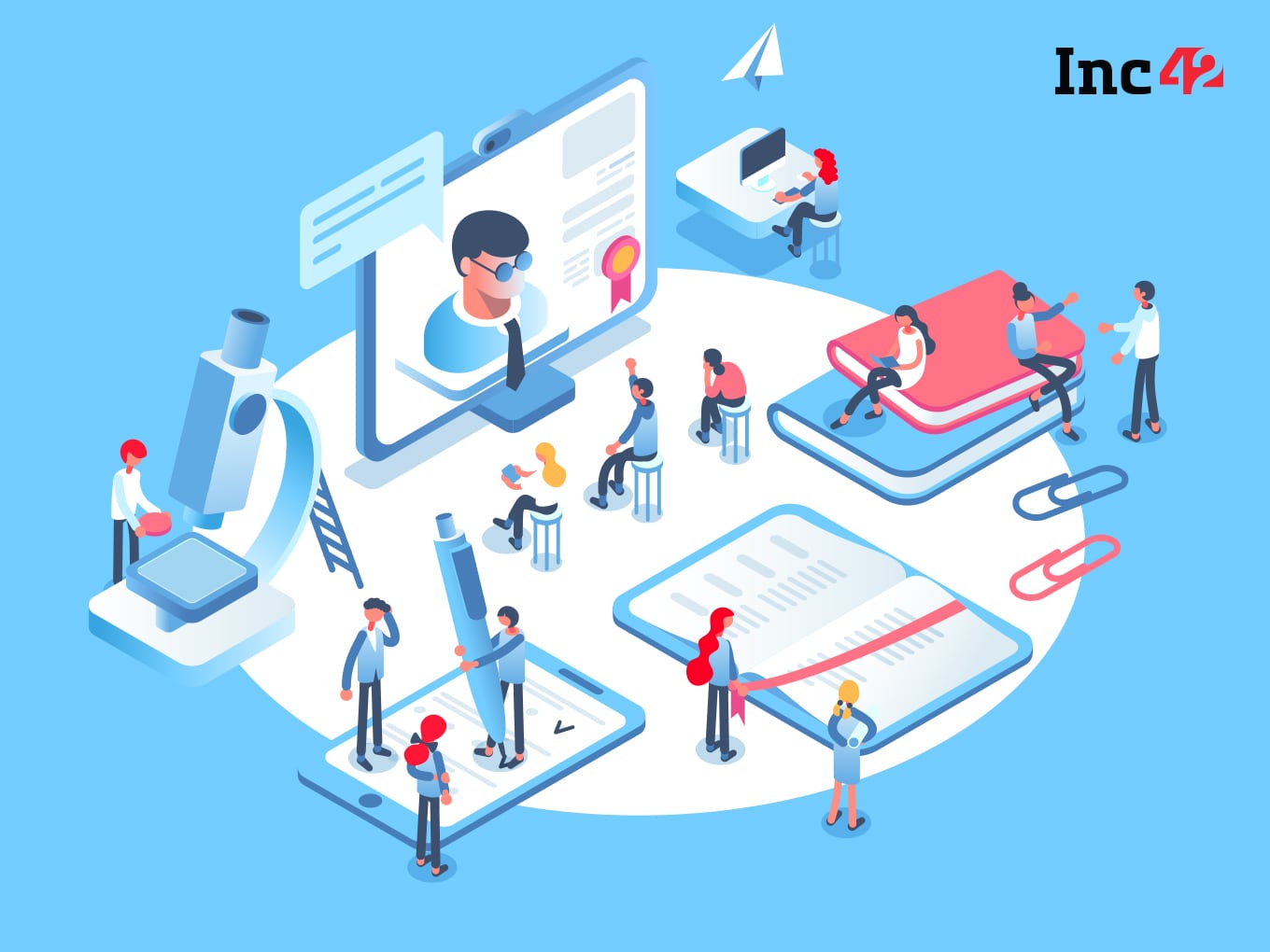 Between January 2014 and September 2019, more than 4,450 edtech startups have been launched in India

An analysis of China’s current state of startup ecosystem will have very few but clear winners, one of which is the edtech sector. In India too, with the nationwide lockdown, there is a sudden surge in demand for edtech startups even as others are struggling to find a way out. Ecommerce and edtech are two sectors that may survive this rock phase, say experts.

However, as of now, it will not be wrong to say that edtech is yet to gain mass traction. Despite the launch of 4,450 edtech startups in the country, India has only one unicorn in the sector, BYJU’s, with a $5.7 Bn valuation. In fact, as we have mentioned in our earlier reports, BYJU’s also had to spend a good ten years to reach the valuation. The startup worked in stealth mode from 2011 to 2015 and the app was launched only in 2015.

For new entrepreneurs in the space, staying afloat has been all the more difficult. There is still a lack of warm reception for tech in India and many other countries. What a classroom can offer in terms of interpersonal skills, is something tech may not be able to replace, say educational experts.

“In our view, the failure rate for edtech startups is comparable with any other sector. Given that education is a high-involvement category and a career-affecting service, tech adoption is usually lower compared to other services and products. Hence, edtech startups can take more time to scale up than in some of the other categories,” Pranjal Kumar, CFO and head of education fund at Bertelsmann, told us earlier.

Funding And M&As In Edtech

To a great extent venture capitalists (VC) are playing an important role in helping the startup ecosystem, including edtech, largely considered futuristic. “VC investments have often been likened to rocket fuel or running on a treadmill. When we come in and invest we want to see you grow 5x over the next 15-18 months and keep that momentum going after each round of financing,” said Sajith Pai, Director, Blume Ventures.

The VCs who have been supporting BYJU’S, Vedantu, Toppr and others in the Indian edtech industry to scale-up businesses would be as below:

Other than the above, Helion Venture Partners, Indian Angel Network (IAN) and India Educational Investment Fund are some of the prominent funds in the sector.

The edtech ecosystem also saw Initial Public Offering (IPO), and mergers and acquisitions, the two of the most common exit strategies in any startup ecosystem. As per DataLabs’ The Future Of India’s $2 Bn Edtech Opportunity Report 2020 between 2014 and 2019, a total of 35 edtech startups underwent merger or acquisition. The report also states that the Indian edtech startup ecosystem has seen the participation of 28 active acquirers, 54% of which hail from the education technology sector itself.

“M&As in the edtech space is generally focussed on either acquiring startups with good intellectual property in the form of content, pedagogy, integrated hardware, and software or by acquiring startups having a proven business model, market penetration and good reach,” Rajeev Tiwari, founder and director of STEMROBO Technologies that offers STEAM learning programme for K-12 segment told Inc42 in an earlier interview.

From Smartboards To Augmented Reality

The right to free education up to the age of 14 is enshrined as a fundamental right in Article 21A of the Indian constitution. However, what changed the game was the introduction of Right To Education (RTE) through the 86th constitutional amendment in 2002. Since then, the adult literacy rate in the country has jumped up by 13% from 61% in 2001 to 74% in 2018.

The gap in quality of education delivered in private school and the public institutions is increasing every year, as per the Annual Status of Education Report (ASER). According to the report, among fifth-grade students only 23% could solve a simple division problem in government schools, while this number was 40% in more expensive private schools. The introduction of RTE has helped at least a small segment of the population seek private education.

Even within private schools, till a decade ago digital education was restricted to smartboards in classrooms till the SaaS or B2B segment came up. After 2010-11, startups such as BYJU’S, Toppr, Meritnation, Simplilearn among others in India have changed the way education was perceived in the country. Education is no longer just limited to classrooms. Edtech startups offer free and open access to knowledge and the transparency is also higher.

The adoption of vernacular languages by edtech startups is another reason for the rising popularity of edtech startups. “Only 10% of India’s population can speak English. To build large businesses that can capture greater value, incorporating vernacular learning is key,” said Sajith Pai, Director Blume Ventures.

With marks and certification still being the primary focus in educational institutions and chasing the great American dream mindset in the market, the investor interest for test prep and online certification startups is also expected to increase. The edtech industry today caters to five core sub-sectors including test preparation, online certification, skill development, online discovery, and STEAM kit and enterprise solutions.

Lido Learning, for instance, enables students from class 5 to class 9 to connect online with live teachers who offer maths and science tutorials. Parents pay a subscription fee for their kids to attend small group classes through real-time interactions with teachers. The platform also provides students access to offline content to practise classroom lessons. Besides maths and science, Lido is looking to launch English tutorials in the first quarter of 2020.

“Students in smaller towns were thrilled to be getting the same product and the same quality of teachers that students in the bigger cities were getting. That is when Lido’s vision changed — it was not just about making tuition classes convenient anymore, it was about democratising education for all,” Sahil Sheth, founder, Lido Learning told Inc42.

The Indian education system is focussed on marks and teaching for test grades. However, unlike education systems in other countries, this style of education does not prepare students for real life. This is the pain point most edtech startups are trying to solve.

Zishaan Hayath, CEO and cofounder of Toppr, a popular online learning app, told Inc42  in an earlier interview, “The problem with the traditional Indian education system is its ‘one-size-fits-all’ approach that fails to take into account the varied abilities of the students they’re trying to educate. This, combined with the questionable quality of education in schools, leaves students in the lurch after they graduate, as they simply don’t have the skills to get good jobs.”

More than 15 Mn students in India prepare for competitive exams and thus there is a huge market for online test preparation startups backed by the reach of the internet in Tier 2 and Tier 3 towns.

This gives startups like institution management platforms such as ClassPlus a big market. A majority of the coaching classes have an offline infrastructure, highlighting scale-up challenges as well as an inability to ensure a seamless post-classroom engagement with their students and parents. This is making them look forward to technology in assisting them to run their daily tasks and administration.

Startups such as Gurugram-based edtech company Pesto is also trying to bridge the skill gap between engineers and multinational companies. The startup offers two different programmes – Pesto PRO and Pesto Remote – designed for experienced engineers who want to “superskill” themselves to go from good to great and become proficient to break into international high tech careers.

Educators are also betting high on AR/VR as the next big success in the space. As Ankur Aggarwal, founder of VR-based edtech startup Veative told us the enduring objective of edtech is to improve the yearning to learn and AR/VR helps implement it in a spectacular manner.

Beginning Of A New Era Of Learning?

As per DataLabs analysis, test prep and K-12 edtech startups combined are estimated to be worth $1.3 Bn by 2021, which means that the Indian edtech market will not be seeing any major changes in terms of the hottest sectors. More such predictions can be found in the latest report released by DataLabs — The Future Of India’s $2 Bn Edtech Opportunity Report 2020.

“It would be safe to say that the traits of the Chinese economy which helped its edtech industry boom find their parallels in India which indicates a very bright future for Indian edtech and may justify the high valuations that companies in this sector command,” said Akhil Shahani, Managing Director of The Shahani Group.

The education sector is also forecast to spend more than $6 Bn annually on augmented and virtual reality technologies by 2023. “Funding for the technologies remains a major hurdle to adoption, but price points for equipment are dropping rapidly, according to a new market forecast from ABI Research,” said Simulanis founder Raman Talwar earlier. According to another report, “Augmented and Virtual Reality in Education,” the market for augmented reality in education will hit $5.3 Bn in 2023, with the market for virtual reality head-mounted displays trailing at $640 Mn.

Additionally, among the other edtech subsectors, favourable market conditions combined with the growing demand makes the skill development sub-sector a lucrative opportunity for high-value returns for Indian startup investors

For 2020, Inc42 had also curated a list of some edtech startups that are expected to make the biggest impact on the market. The list includes WhiteHat Jr, Playshifu, Lido Learning, Pesto, Kings Learning, Cuemath, Classplus. Well, with schools and other educational institutions shut due to coronavirus, more edtech startups are expected to find takers, as is seen in China.