Startup Watchlist: Indian Edtech Startups To Look Out For In 2020

Startup Watchlist: Indian Edtech Startups To Look Out For In 2020 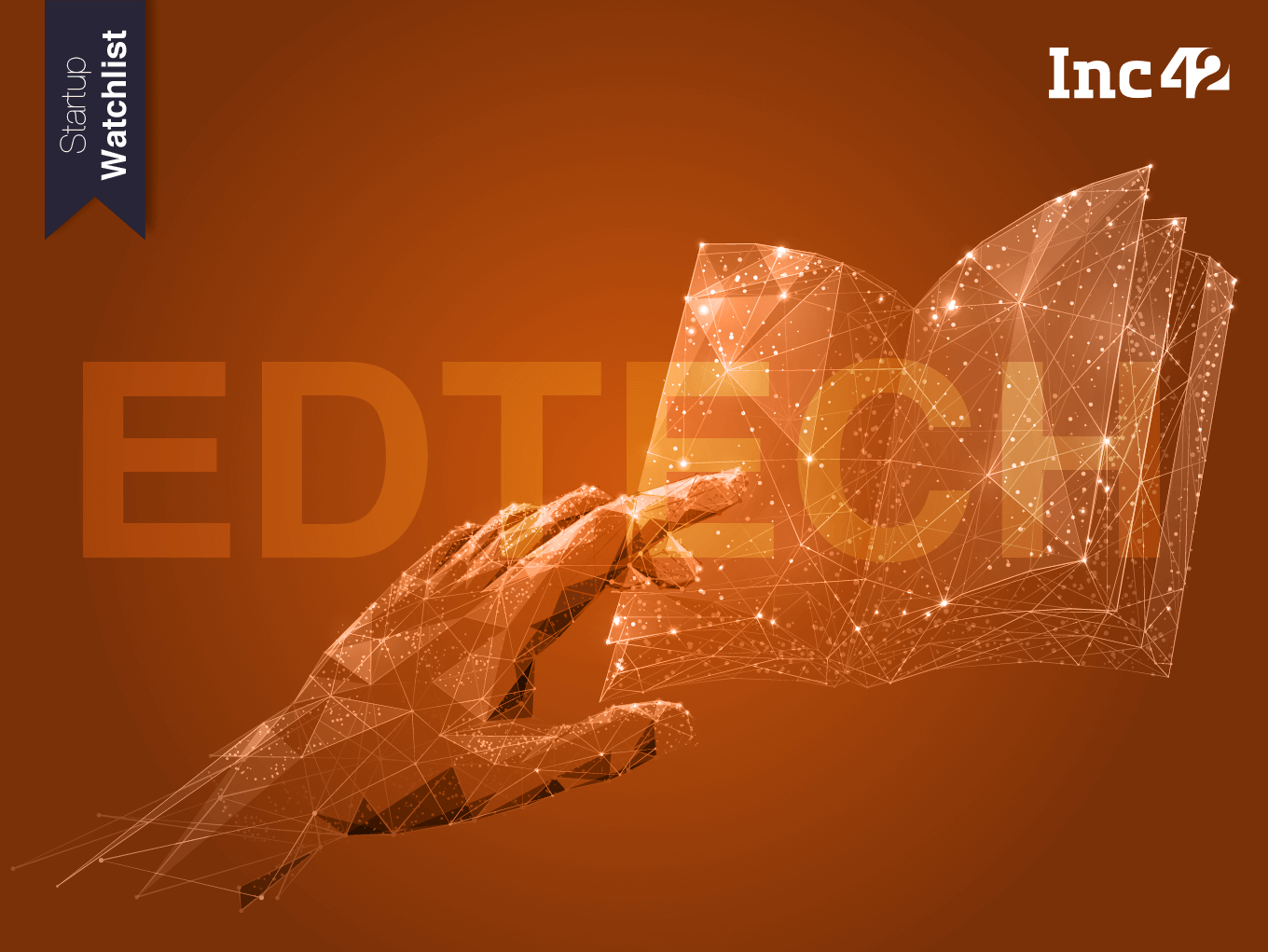 Edtech models such as language learning, B2B offerings, and specialised learning are expected to come to the fore this year

Which edtech startups have made it to our Startup Watchlist 2020?

The Inc42’s annual series, Startup Watchlist brings together the list of top growth stage startups to watch out for in 2020 across industries including  — agritech, deeptech, logistics, healthtech, edtech and more.

This article is part of Inc42’s Startup Watchlist, an annual series in which we list the top startups to watch out for in 2020 from industries such as agritech, deeptech, logistics, healthtech, edtech and more. Explore all the stories from the ‘Startup Watchlist’ 2020 series here.

The edtech startups are selected for the Watchlist based on editorial criteria as well as the recent funding, stage, growth or scale achieved in the preceding year and how it has differentiated itself or its model in a competitive market.

Despite boasting the largest higher education network in the world, the Indian education system has been in bad need of repairs for decades. For while higher education is more or less great and venerated around the world, primary or high school education remains a massive problem area in the context of public education. For private schools, the fees are prohibitive and often exclude communities. This leads to a lack of adequate skill training at the primary school level, leaving students ill-equipped for the challenges in the job environment.

As India prepares for a $1 Tn tech economy, it will rely on the world’s largest population under the age of 25 and the second-largest graduate talent pipeline. Just like in other sectors of the economy, the education sector in India offers serious potential for technology and disruption. But this disruption will only be possible if edtech startups go beyond K12 education and test prep and focus on building the right skills among India’s young learners and young workers.

While literacy is growing steadily with the advent of digital life — the Census 2011 show India has a literacy rate of 74.04% as opposed to 64.80% in 2001 — the need of the hour is to help build skills in children, college-goers as well as working professionals for the tech economy.

The success of startups such as Byju’s, Vedantu and Toppr offers a mere glimpse of the potential in the sector. While these have focussed on school-level education and test prep, other models are yet to be explored fully. The long turn-around time for education technology to take off in India as compared to other tech sectors can be attributed to the bias of parents towards traditional means of education. However, numbers reflect that the trend seems to be changing.

Between 2014 and 2019, a total of $1.802 Bn was raised by edtech startups across 303 deals as per data recorded by DataLabs by Inc42. In the context of total funding, Byju’s, Unacademy, Vedantu, Toppr and Eruditus emerged as the top-funded startups in India. Their combined funding contributed a whopping 80% ($1.38 Bn) to the total value of funding poured into edtech startups.

KPMG projects a $1.96 Bn online education market opportunity in India by 2021 with key driving factors such as deeper penetration of the internet and smartphones, rising disposable incomes and the ever-growing demand for specialised learning (STEM) and reskilling. Startups are also tapping into the growing demand from educational institutions and coaching institutes, while also looking at language skills.

For 2020, Inc42 has curated a list of some edtech startups that are expected to make the biggest impact on the market, and have the potential to shine in the new year. Here are our picks:

Editor’s Note: The list is in alphabetical order and does not represent a ranking of any kind.

While many edtech startups are focussed on the end learners, some are looking to cater to businesses as well. Founded in 2018, Classplus lets coaching institutes, tuition centres and private tutors to take their traditionally offline class management setups online with a mobile-first product.

Classplus takes a subscription fee from the coaching institutes for its software suite, which handles class communication, payments, assessments, online learning programmes and attendance. The product also doubles up as their online content repository and content distribution platform. It also enables tutors to set up ecommerce channels to make online learning programmes available to students outside their traditional network.

Classplus claims to have partnered with more than 1500 coaching institutes, spanning across more than 50 different cities. On the strategy for 2020, cofounder Mukul Rustagi told Inc42, “We aim to grow the product vertically deeper this year. Our mission is to integrate a tutor’s entire ecosystem on a single mobile platform and enable him to seamlessly take his business online. We aim to establish a strong presence in more than 100 Indian cities this year.”

While science, emerging tech and engineering are the hot topics for learners these days, all of these involve proficiency in mathematics. School children are often daunted by maths and that’s where Cuemath comes in. Cuemath enables a network of math teachers to run offline/online math classes for students. The company generates revenue through fee payments by students which it shares with the teachers in a 40:60 ratio. A student typically pays about INR 2K per month for 12 classes.

Cuemath claims to have a network of 5K+ teachers today, running both offline and online classes and over 40K students daily.

Founder Manan Khurma told Inc42 that deep specialisation rather than one place that teaches all subjects will be needed shortly. “Stuff you needed to know at a basic level is available for free on Khan Academy or some such place. This “basics for free” will force a higher bar for truly quality education. In the future, a portal or a college that teaches all subjects will not teach all of them at a world-class level. Will digital access erasing physical boundaries, if education is not world-class then the rewards in terms of valuable jobs will be much lower than expected,” he said.

For 2020, Cuemath is looking to launch new programmes for math learners and grow their network to 10K teachers and 100K students.

The company behind Enguru, a spoken English learning app launched in 2015, Kings Learning’s app is available in 28 languages and teaches English to those familiar with regional languages from the basics up to more complex industry-specific functional English communication skills.

For 2020, Kings Learning will focus on the live classes which were launched in September 2019. Cofounder Arshan Vakil told Inc42 that for the self-learning modules, the company plans on improving the AI-enabled simulated conversations.

With over 5 Mn downloads to date, Enguru is observing a 29% monthly growth on the website visits, according to Kings Learning. “The biggest challenge will be the retention of learners and focus on learning outcomes. As companies scale up and start chasing metrics and revenue the learning outcomes have to be kept at the core of all innovations in edtech. Keeping the learner engaged while ensuring he/she is learning effectively,” Vakil told Inc42.

AI and ML algorithms are changing the world in other sectors. The newest edtech kid on the block and founded in 2019 is Lido Learning, which enables students to attend live online tutorials remotely while enabling superior learning outcomes by leveraging tech, data analytics, and digital content to deliver better learning experience.

Currently, Lido offers up to two subjects (maths and science) with different course duration options and plans to launch courses in English in January 2020. At present, the platform has on-boarded 1,400 trial customers since its sales operations commenced in June 2019.

Lido has its presence in Mumbai, Bangalore, Delhi NCR as well as Tier 2 cities of Uttar Pradesh and Punjab. Over the next three months, the company has plans to start operations in Madhya Pradesh, Rajasthan, Gujarat, Telangana and Tamil Nadu.

Founder and CEO Sahil Sheth told Inc42, “We see a huge value-add in improving language skills and are therefore launching a state of the art English learning programme. Lido will also be doubling down on expanding our customer base across ICSE and CBSE for math and science as we expand to 10+ states in India and expand to the younger grades (3rd and 4th standards).”

It’s not just school children that need a helping hand from technology to learn new skills. India’s massive base of engineers also needs to update their tech skills and know-how. Founded in 2018 and headquartered in Gurgaon, Pesto provides training to experienced and fresh engineers to upgrade their knowledge, get certified and get the best paying job.

Pesto fellows a zero tuition fee model and only charges learners when they land an offer and are hired. Once hired, Pesto takes 17% of the student’s salary for the next 3 years.

“The current academic curriculum in school and colleges covers the theoretical aspect and can only be considered a starting point. Currently, there are over half a million open software engineering jobs in the US alone. That number is predicted to be over 1.4 million by 2020. There are 5 million software engineers in India,” a Pesto spokesperson told Inc42.

AR and VR technology will play a powerful role in transforming edtech. Playshifu uses the power of AR to build a foundation of learning for kids through experiences that hit on 15 key skills. The startup founded is 2016 by Vivek Goyal has two flagship AR gaming experiences — the Shifu Orboot, an AR-based interactive globe and Shifu Plugo, an AR-powered gaming system which helps inculcate STEM skills in kids through story-based games.

Playshifu claims to have a user base of over 300K kids worldwide. The company boasts of a 30-day retention rate of 46%, which is supposedly five times higher than competitors. Playshifu claims to have reached double the number of Indian homes in 2019 than 2018 with a 60% increase in Tier 2 and 3 cities as well. The company further states that more than 600 schools in India and the US, UK, and Canada are interacting with PlayShifu products daily and weekly.

Founders Vivek Goyal and Dinesh Advani believe that the global toy industry is a $90 Bn industry, being disrupted by technology-enabled toys (robotics, AR, voice). “As AR/VR hardware and experiences hit the sub-$300 price point in the next five years, we anticipate a wave of mass adoption. In the coming months, we will be creating new toy lines that dig deeper into a well-rounded ‘phygital’ learning experience and cover the entire spectrum of foundational skills that children need to develop early on,” a Playshifu spokesperson said.

Programming and coding skills are fast becoming as indispensable as language and comprehension. Touting itself as the first structured artificial intelligence and space technology curriculum for kids in the world, WhiteHat Jr provides one-on-one online interactive coding lessons to children between the ages of six and 14 years.

Relying on a subscription model, the average ticket size for WhiteHat Jr courses is INR 35K currently. Established in 2018, Whitehat Jr claims to have over 500K registrations with more than 5K live online classes being conducted daily.

Speaking to Inc42, founder Karan Bajaj said that WhiteHat Jr and other edtech startups are enabling the democratisation of education and making it accessible to students across the country.

“Using technology as an enabler, we can accelerate learning for a whole new generation beyond what was previously possible for any other generation. creativity. For example, a six-year-old kid has created a sign language app for the hearing impaired children; an eight-year-old kid has created a 24×7 school communication channel like Slack. This is unheard of anywhere else in the world.”

With a focus on strengthening the technology platform and expanding the course curriculum to cover more programming languages and students at grades 10-12, WhiteHat Jr is also planning to expand in certain key markets outside India in 2020.