From K-12 Education To Test Prep: The Edtech Startups Setting The Pace In India

As per DataLabs By Inc42 analysis, India is home to over 4,450 edtech startups

The likes of BYJU’S, Toppr, Vedantu and Unacademy have been quite popular in India

And he has certainly hit the nail on the head in this regard. Although the age-old education system of India has come a long way, Indian edtech startups are still struggling to create a steady revenue stream without burning too much cash. The startups spending significant time and amount in strengthening their market share are doing so on the back of massive funding and climbing up the popularity ladder fast.

According to Datalabs by Inc42, there are around 4450 edtech startups in India. According to DataLabs’ The Future Of India’s $2 Bn Edtech Opportunity Report 2020, capital inflows into the test preparation and online certification segments are comparatively higher. Together, these two make up for 88% of the total funding in edtech startups. 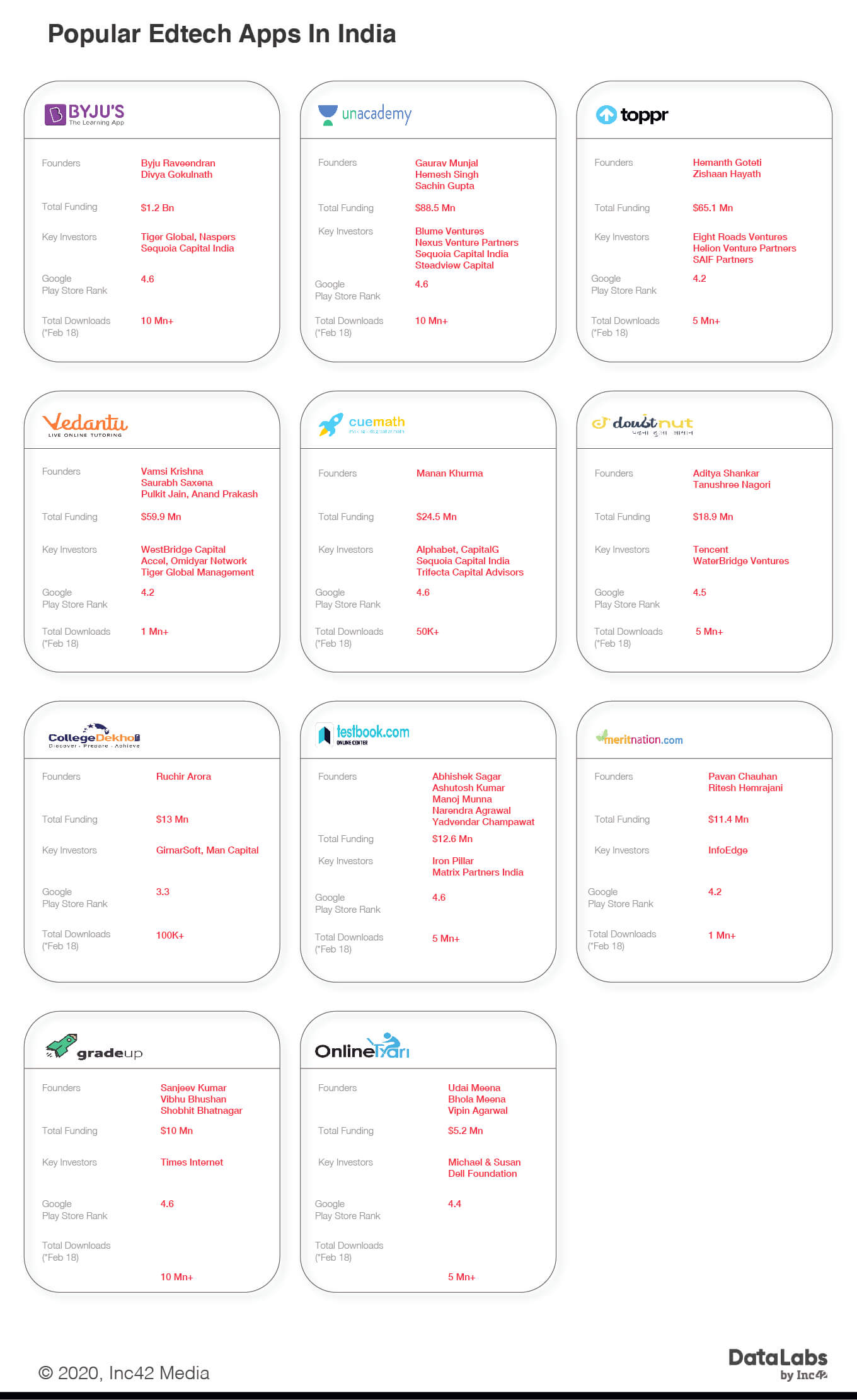 This group of leading edtech startups in India has been shortlisted based on factors such as the funding raised so far, the investor portfolio, Their Google Play Store ranking, total number of downloads and the founding team. The seven most popular startups (listed alphabetically) founded by Indian entrepreneurs, scaling high on all these parameters are:

India’s first edtech unicorn, BYJU’S offers a learning app, which was launched in 2015 and has learning programmes for students in classes IV-XII along with courses to help students prepare for competitive exams like JEE, NEET, CAT, IAS, GRE, and GMAT. Recently it has also collaborated with Disney to launch a learning app for classes I to III. The company reported its revenues for the financial year 2017-18 at $69.4 Mn (INR 490 Cr), a 97 % jump since the last financial year. It is looking to achieve a revenue target of (INR 1400 Cr) this financial year.

Students simply snap a photo of a problem and the Doubtnut app serves up a video of the solution within 10 seconds, while simultaneously suggesting other concept videos to help students learn the topic better. The app can read questions in 11 Indian languages, as well as English. The company has over 13 Mn monthly active users across several platforms (web, app, YouTube and WhatsApp).

It is extremely popular in low-income groups where demand for low-cost educational services is high. Doubtnut has witnessed a 30x growth in its daily active users since March 2019, as claimed by the company in an official media release

Gradeup plans to make a deeper presence in K12 space by introducing one year and two-year programs for class XI and XII students preparing for JEE and NEET. Data analytics and tracking of the kind of engagement is key to the success of Gradeup, and the company intends to further enhance its capabilities applying data science to further help students improve their performance.

Gradeup told us it’s investing a lot in research and product development to build the platform and services which can help aspiring students deliver outcomes for its users. Further, Gradeup will be investing in building a superior product with a higher level of engagement and success for its students, scaling up the categories that are working and reaching out to a larger audience. As claimed by the founders, enrolments have been doubling up every quarter and revenue has been increasing by about 30% to 40% per month.

Testbook is an online preparatory platform for all kinds of competitive government examinations. Last few years they have got more than 35000 selections who are placed in different government jobs. The 200+ strong Testbook.com team headquartered in Kharghar, Navi Mumbai has successfully raised four rounds of investments. Recently the company raised INR 60 Cr as a part of its Series B round of funding led by Iron Pillar.

Testbook claims to have turned profitable in April 2019, and clocked an annual revenue of INR 31 Cr in the last financial year, with an INR 45 Lakh EBITDA (earnings before depreciation, interest, taxes and amortisation).

Toppr caters to the individual learning styles of candidates and provides the widest K12 syllabus coverage with 1.5 million course combinations. It currently has over 10 million students on its platform and helps them prepare for various school, board, and competitive exams. It uses natural language processing to solve student doubts instantly. It also uses artificial intelligence, machine learning, and big data to study student behaviour and create adaptive learning paths with infinite combinations.

As per DataLabs analysis, test prep and K-12 edtech startups combined are estimated to be worth $1.3 Bn by 2021. Toppr is just one of the many startups looking to tap this burgeoning opportunity in the Indian market.

This Bengaluru-based startup began as a YouTube channel in 2010 by Gaurav Munjal. In 2015, it was officially registered as an educational technology platform when co-founders Roman Saini and Hemesh Singh came on board. To date, it has raised $88.5 Mn.

The company claims to have more than 10K registered educators and over 13 Mn learners. It also says it gets 100 Mn monthly views across its various platforms such as Unacademy, Unacademy Plus, Wifistudy, Chamomile Tea with Toppers, Unacademy Studios and The Solutionists.

It is a live online tutoring platform that enables personalised learning. Vedantu uses technology to bring together teachers and students on a single platform to enable live learning between them. Although Vedantu’s Android app is less popular compared to its peers, the startup is an apple of investors eyes. It has raised $59.9 Mn since its inception in 2011 and is backed by investors like Tiger Global Management, WestBridge Capital, Accel, Omidyar Network among others.

It claims to have 500+ teachers on its platform with students accessing the platform across 1000+ cities and 30+ countries. Vedantu’s W.A.V.E platform has been granted an IP Patent for ‘Measuring the Effectiveness of An Interactive Online Learning System’ that helps teachers in identifying a student’s attention level, increases student-teacher interaction, doubt-solving, participation in gamified quizzes, and customization of teaching patterns owing to constant feedback. Owing to these capabilities Vedantu has achieved LIVE classes of 1 million hours till date.

Apart from these, there are a few other online education startups which due to their global brand name or existing investor portfolio, have been making a mark for themselves in the industry. 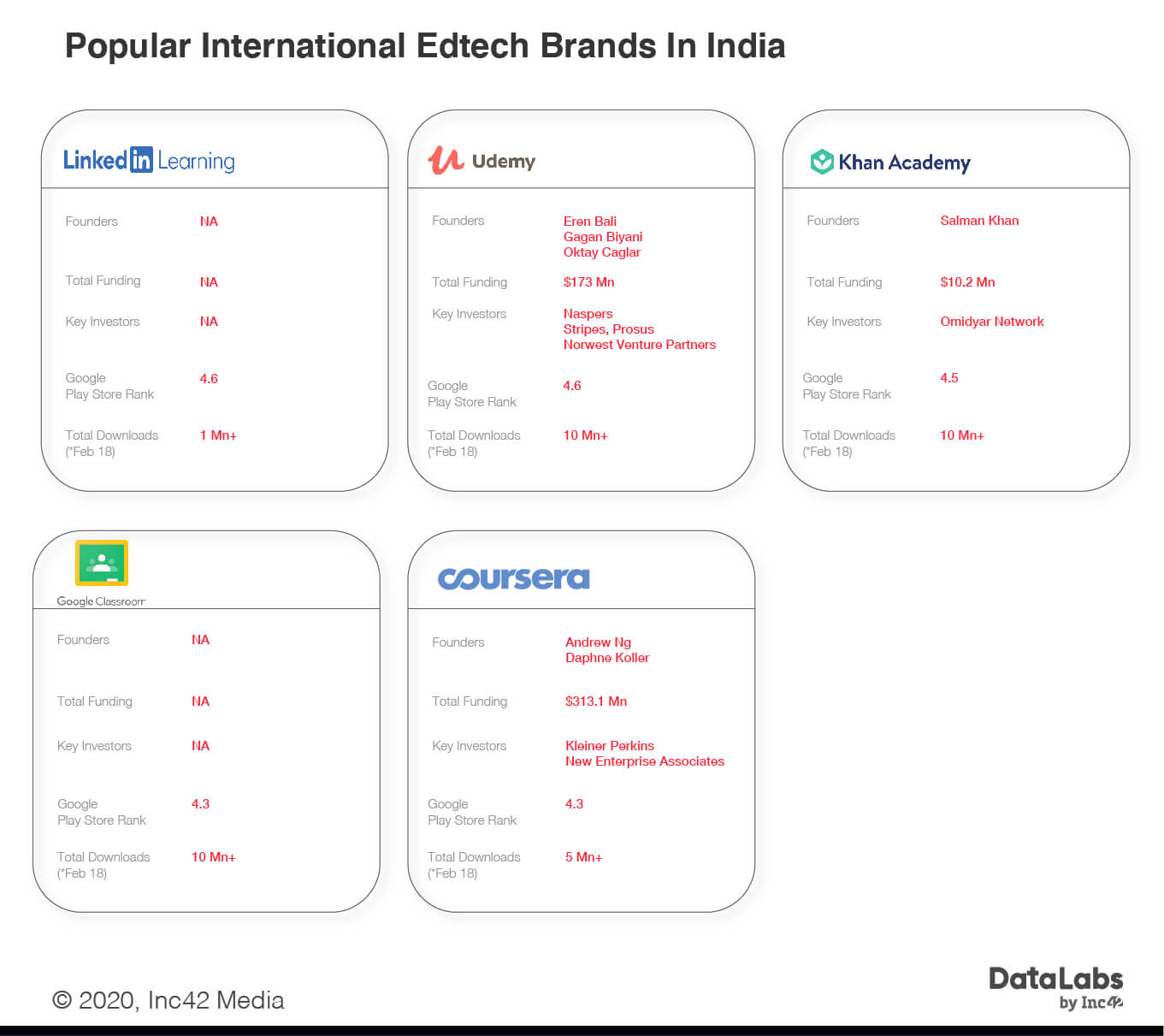 The Popularity Conundrum For Edtech Startups

“I see the awareness cost or the cost of discovery for edtech products is still very high, making it a major challenge for many to overcome. Coming to the second phase of ‘Usage’, we live in an age of ever-increasing distractions. I think very few edtech products are able to stoke the desire to learn by guiding users through a personalised learning experience that is engaging. Most edtech startups fail to stay relevant in the users’ mind which leads to product failure,” Kulkarni told us.

Coming to the impact that startups are having, he added that most find it difficult to quantify their impact in terms of improving the learning outcomes of the end-users. Collaborative work is important for achieving scale. “I have seen very few startup founders aware of the work done by corporates or other startups in the education sector and rarely reach out to them for partnerships,” he added.

In conclusion, to gain popularity amid the Generation Z as an edtech startup, one needs to constantly compete for the attention of the end customer. Learning insights through user behaviour analytics is the key to understanding users better. Also, only in-depth knowledge about the content and curriculum is not enough for appealing to Gen Z.

“You have to deliver the content through a human-centric design process so that it will result in intended actions by the user, motivating her to learn and engage more with the content,” said Gray Matter’s Kulkarni.