The Outline By Inc42+: Edtech’s Fascination With Coding

The Outline By Inc42+: Edtech’s Fascination With Coding 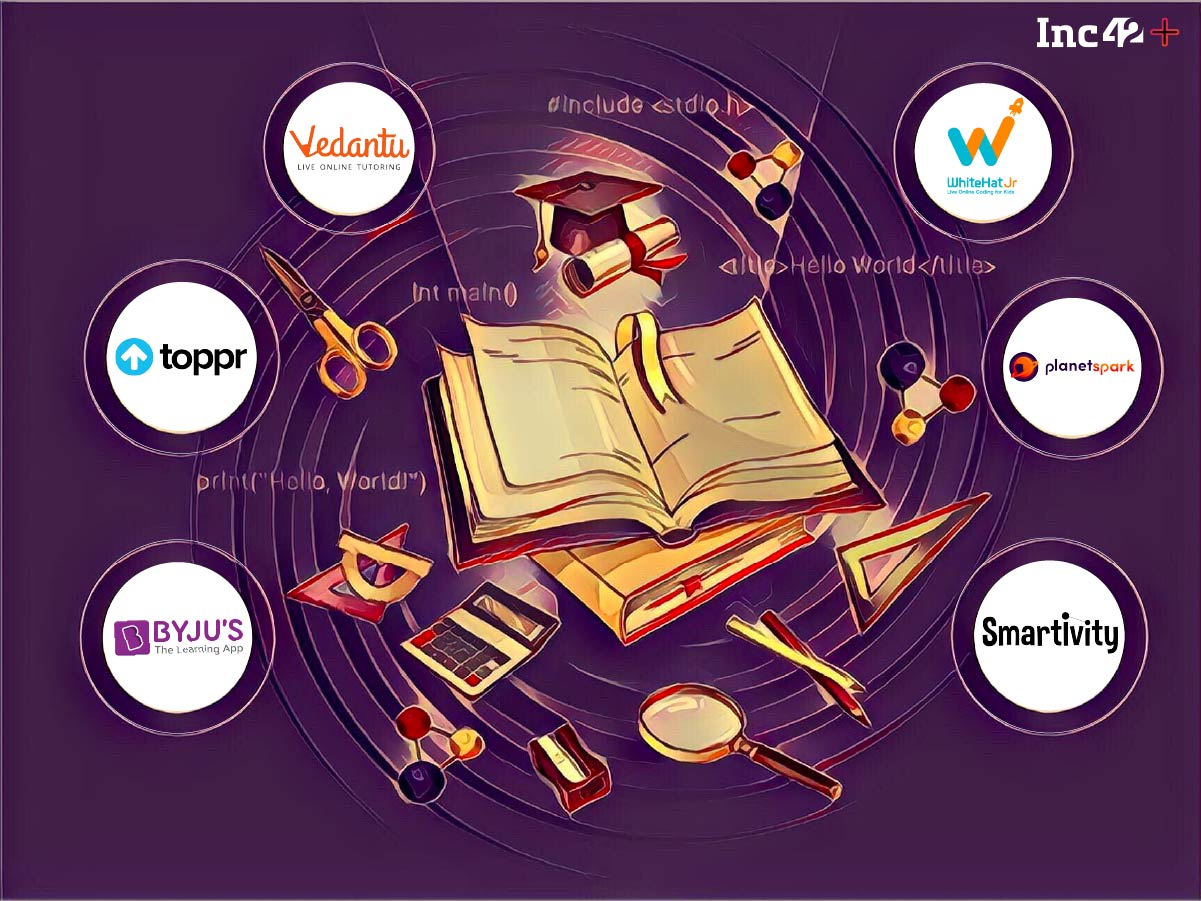 Is the hype around coding built by the BYJU’S-WhiteHat Jr deal and the NEP 2020 vision justified?

Last week, Indian education policy finally caught up with the times and the mission statement of the thousands of edtech startups in the country. With an eye on holistic education and 360-degree learning, the National Education Policy 2020 (NEP 2020) has introduced some radical changes like doing away with formative assessment, harmful hierarchies in primary education and silos between different areas of learning. At the same time, it is also looking to reduce the burden on parents from the point of view of coaching classes and eliminate the pressure on students when it comes to the ‘high stakes’ aspect of certain exams.

The NEP 2020 envisions Indian schools and colleges for the next phase in the 21st century. From the earlier 10+2 system, the primary and secondary school structure has been modified to 5+3+3+4 model. Programming and coding is a major focus in the NEP as a subject in school curriculum from Class 6 and higher. The policy also brings greater focus on the ability of students to read, write and perform basic operations with numbers, rather than rote learning.

Many of the reforms mentioned in the draft are things that edtech companies have been working on for years now — from teaching coding to school kids and inspiring critical thinking, to early childhood education and tech-integrated multidisciplinary learning. But, of course, their user base was limited to a certain class of students whose families could afford after-school courses or premium schools. With government reform coming into picture, the hope is that quality education and online learning can be experienced by students across classes.

But, as with any policy, implementation will be key in eventually deciding the fate of this major shift in education. Until then, the best bet for quality online education is through the plethora of products and services offered by edtech startups.

Coding The Future Of Edtech

BYJU’S, which has become almost synonymous with edtech and online learning in India, continued its juggernaut. This week, the edtech unicorn acquired an 18-month-old startup WhiteHat Jr in a $300 Mn deal. In a short span, WhiteHat Jr had created a name for itself as a programming or coding platform for school kids over the age of 6.

Coding and STEM education through virtual platforms is a growing trend in India. Specialist startups such as Camp K12 and Codevidhya made some inroads into the market. But recently, other edtech players such as Toppr, Vedantu, Coding Ninjas have also added kids-focussed coding solutions to their portfolio. Now, BYJU’S has also joined the pack and with 700K registered users on WhiteHat Jr, it already has a sizable base. 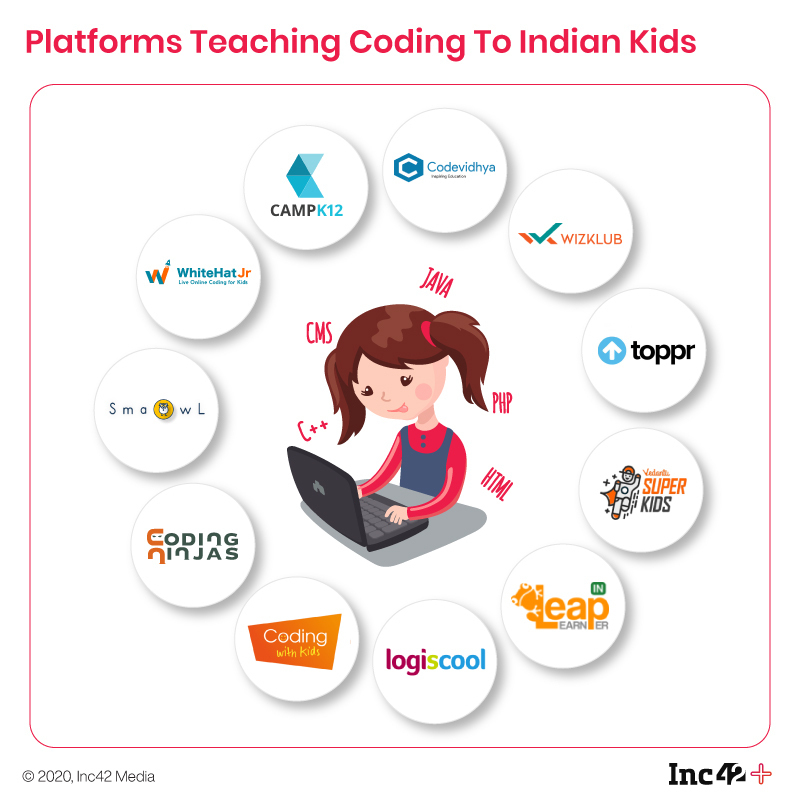 Talking about the acquisition, Karan Bajaj, CEO WhiteHat Jr told Inc42, “Our vision was to create thousands of teacher jobs in India and take the platform to multiple countries in the world. Either we could do it alone or partner with someone like BYJU’S, who share a similar boundaryless vision of the world like us. Also, BYJU’S has much more expertise in education than us. Now, if I want to add a maths category, I do not need to reinvent the wheel again.”

But can the acceptance of coding alone be seen as the win for multidisciplinary education?

Coding at its core is actually just an extension of India’s age-old engineering dream. A way to turn kids into the next Bill Gates or Mark Zuckerberg. The focus on programming languages and coding education has always been a big part of college education in India. The policy simply brings this to the school level to future-proof the digital economy.

As per the World Economic Forum (WEF), India could take some inspiration from the example of China and how the country updated its school system with its changing tech-reliant economy. China realised early on that if it was to win the artificial intelligence and technology race in the long run, kids need to become habituated to coding early on. The WEF said Chinese children are exposed to coding even before they enter pre-school. Can the NEP do this in India?

Bringing Life Skills To The Fore

According to DataLabs by Inc42, India is home to over 4,450 edtech startups (including those that have shut operations) and the most-funded edtech startups continue to enjoy larger market share in the Indian market, including BYJU’S, Unacademy, Vedantu, Toppr and others.

Today, the edtech industry is primarily catering to five core subsectors including test preparation, online certification, skill development, online discovery and STEAM education, in addition to B2B solutions such as learning management systems and coaching class management apps. While skill development might be considered the future and need of the hour, in the current market, test preparation and online certification startups have the higher adoption and also have earned more of the funding.

According to The Future Of India’s $2 Bn Edtech Opportunity Report 2020, capital inflows into test preparation, K-12 and online certification segments are relatively higher than other segments. Together, the two segments make up for 88% of the total funding in edtech startups in 2019.

So in terms of funding, skill development, higher order thinking skills and soft skills training, which are part of holistic learning have taken a backseat. For the NEP 2020’s vision to be realised, a lot of the market has to change. Not only do investors need to see value in what the NEP is trying to sell, but they also need startups that can achieve this. 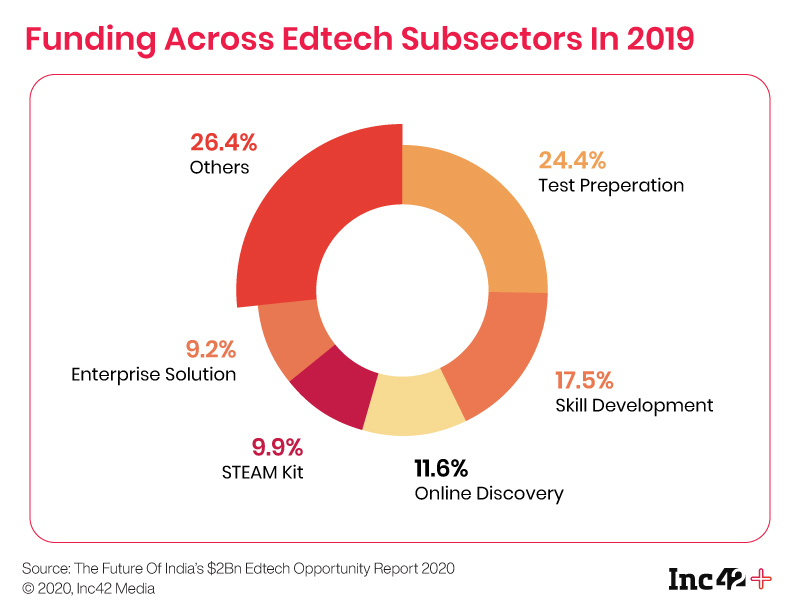 Will Investment Maths Add Up?

“Any capital that has gone to the new-age skill development companies is because the likes of Unacademy have already gained huge capital making it really tough for life skill-focused companies to compete with them. So, every investor tends to invest in one or the other skill development startup but the cheques sizes are usually limited,” believes Blume Ventures’ Sajith Pai.

Blume has invested in Unacademy, which offers online courses for test prep and certification for upskilling along with ClassPlus, which is primarily a coaching institute-focussed app but also offers student-facing courses and learning materials. Besides these, the VC has invested in home tutoring startup FlipClass and higher education-focussed service provider LeverageEdu.

The slower growth for skill development startups can be attributed to the fact that the market for such products is very small in India. At the end of the day, Indian parents are fixated on engineering or medical degrees for their children. And the test prep is a crucial part of the entrance exams rigmarole that students go through each year. So naturally most Indian parents and students choose to spend on courses in these subjects.

“The biggest barrier to introducing multidisciplinary learning is not schools, it is usually parents who are laser focussed on just academic achievement. This means all extracurricular activities become optional instead of being a part of the curriculum except in premium segment schools,” said Ram Subramaniam, cofounder of Clever Harvey, which has set up a specialised junior MBA programme for 13-16-year-olds.

Unless entrance examinations for higher education institutes value extracurricular skills, and lateral thinking, the odds of Indian parents and students changing their focus to these areas are very slim. The Indian students who apply for liberal art courses or Ivy league institutions aboard definitely need to showcase skills like creative writing and competency in extracurriculars, but such students are edge-cases.

Despite its heart being in the right place, the NEP’s focus on holistic learning with no learning outcomes (exams) linked to it makes it seem a tad shallow. While the government has once again looked to boost innovation through policy, there are quite a few unanswered questions about policy implementation as far as the National Education Policy is concerned. It could very well change the face of Indian education, but it needs to first address how it will change the aspirations of students and parents in India.

After confirming talks to acquire TikTok’s US, Canada, Australia, New Zealand businesses, Microsoft is now also eyeing the India and Europe operations of the ByteDance-owned short video platform. This could come as a harsh blow for the TikTok-clones in India, whose user bases have burgeoned considerably and in no time after the TikTok ban in the country.

While there’s no clarity on whether Microsoft’s acquisition will help TikTok in returning to the Indian market, Microsoft is reportedly also planning another entry into the short-video market of India, through a $100 Mn investment in ShareChat (which also has a TikTok-like app Moj).

Beyond BYJU’S WhiteHat Jr, acquisitions are on the rise across Indian startup ecosystem. Gurugram-based online used car platform Spinny acquired rival Truebil. The acquisition comes at a time when the used car market is gaining momentum with even auto giants moving to build capacity.

And continuing the trend of acquisitions, Mumbai-based direct-to-consumer (D2C) brand MyGlamm has acquired digital media startup POPxo, which also ran an ecommerce platform. With this acquisition, POPxo CEO and founder Priyanka Gill will be joining MyGlamm as a cofounder. Connecting with consumers is a key success factor in D2C plays and that’s something MyGlamm is looking to leverage with the POPxo deal.

And when there’s talk of acquisitions, Reliance and Jio cannot be left out of the discussion for too long. On its way to achieve vertical integration in yet another industry, Reliance is close to acquiring Netmeds for medicine deliveries. The Mukesh Ambani-led company has entered into nearly 49 mergers and acquisitions in the past with plenty of other strategic investments in pretty much every tech sector. It’s Reliance’s way of cornering the market. But just like Google, Facebook and other tech giants, who have to balance being partners and competition for Jio, startups also have to answer the big question — fight, collaborate or die? As seen with the much-hyped launch for JioGlass and in the growth achieved by Haptik, working with Jio can have its upsides and it can definitely help startups overcome the doubts that creep in when funding becomes scarce.

Beyond funding, Jio offers startups a pedestal for their products, but at the same time, there’s always the fear that despite its self-proclaimed startup status, Jio is ultimately just a tech giant and a conglomerate, which immediately makes some startups pause and think twice.

And how will Reliance tap the edtech opportunity? With its acquisition of Embibe, Reliance had taken a step into edtech territory, but with the nature of entrance examinations changing and the need to look beyond scores, will Embibe shift focus from test prep? Or will NEP 2020 take a step back and address the aspirational dissymmetry between the policy and the aspirations of India’s parents and students?

An earlier version of the article erroneously attributed a quote to Sajith Pai, which has now been taken down.
facebooktwitterwhatsapp