In the aftermath of Covid-19, all educational institutions have started adopting online classes

Students are protesting against the discriminatory nature of online education

Edtech has always been pegged as a great equaliser which could deliver access to good education in remote areas. However, as the coronavirus lockdown pushes all educational institutions to adopt digital education, equity in education remains far-fetched.

As students moved back to their native towns and started studying from the confines of their homes, the country’s digital divide became much more apparent. The disparity in access to the internet, electricity, and devices like computers or smartphones has emerged as the major reasons for students unable to access online classes.

As is the case of Muskan, who is a twelfth standard student of a government school in Kalyan Puri, Delhi. Her family has only one smartphone and her father, who is a bus driver, takes it with him during the day when her school conducts online classes.

According to the 2017-18 National Sample Survey report on education, only 8% of all Indian households with members between five to 24 years of age, have access to both computer and internet.  While it is possible to access online classes on smartphones, only 24% of Indians own smartphones. And there too, the usage of the devices is not always with the student.

In cases where parents are able to arrange smartphone/laptop access for their children to attend online classes. This usually interferes with their office schedules and for others the cost of 4G data packs is turning out to be an expensive affair.

A mother of a second standard student from Ghaziabad told Inc42, “My husband and I are working from home, so we both are using laptops. My child has to attend online classes for five hours. We are not able to provide a laptop for so many hours. We bought an iPad for her, but that is under repair now. So, she is using my phone for the same and that makes it difficult for me to take calls. On top of it, our internet connection doesn’t support so many gadgets.”

Muskan’s classmate, Anchal who is able to access her daily two-hour online classes through a smartphone, said that recharging internet data packs is turning out to be costly for her in comparison to the usual small top-ups that her family is used to.

In addition to the cost of internet packs and access to gadgets, the other big infrastructure needed for online education is reliable power supply. In a Youtube video put out by a Delhi students’ organization, Collective, a postgraduate student at JNU, Teeju noted that inconsistent power supply in her region does not allow her to keep the phone charged at all times.

A countrywide survey of villages conducted by the Ministry of Rural Development in 2017-18, also showed that 16% of India’s households received one to eight hours of electricity daily, 33% received 9 to 12 hours, and only 47% received electricity for more than 12 hours a day.

Further, according to the All India Survey on Higher Education (AISHE) 2018-2019, India has around 993 universities, 39,931 colleges, and 10,922 standalone institutions listed on its web portal, of which 60.53% colleges are located in rural areas. Overall, there are over 37.4 Mn students enrolled in these colleges.

Even in regions where students have electricity and gadgets to access the online classes, the strength of data connections again put certain students at a disadvantage. For instance, take the case of Taskeen, a postgraduate student at Jamia Millia Islamia (JMI). She noted that internet shutdowns are common in the Kashmir valley where she is currently holed up due to the pandemic. And after the abrogation of Article 370 in August 2019, Srinagar and parts of Kashmir have only subsisted on a lean diet of 2G internet and whitelisted sites. 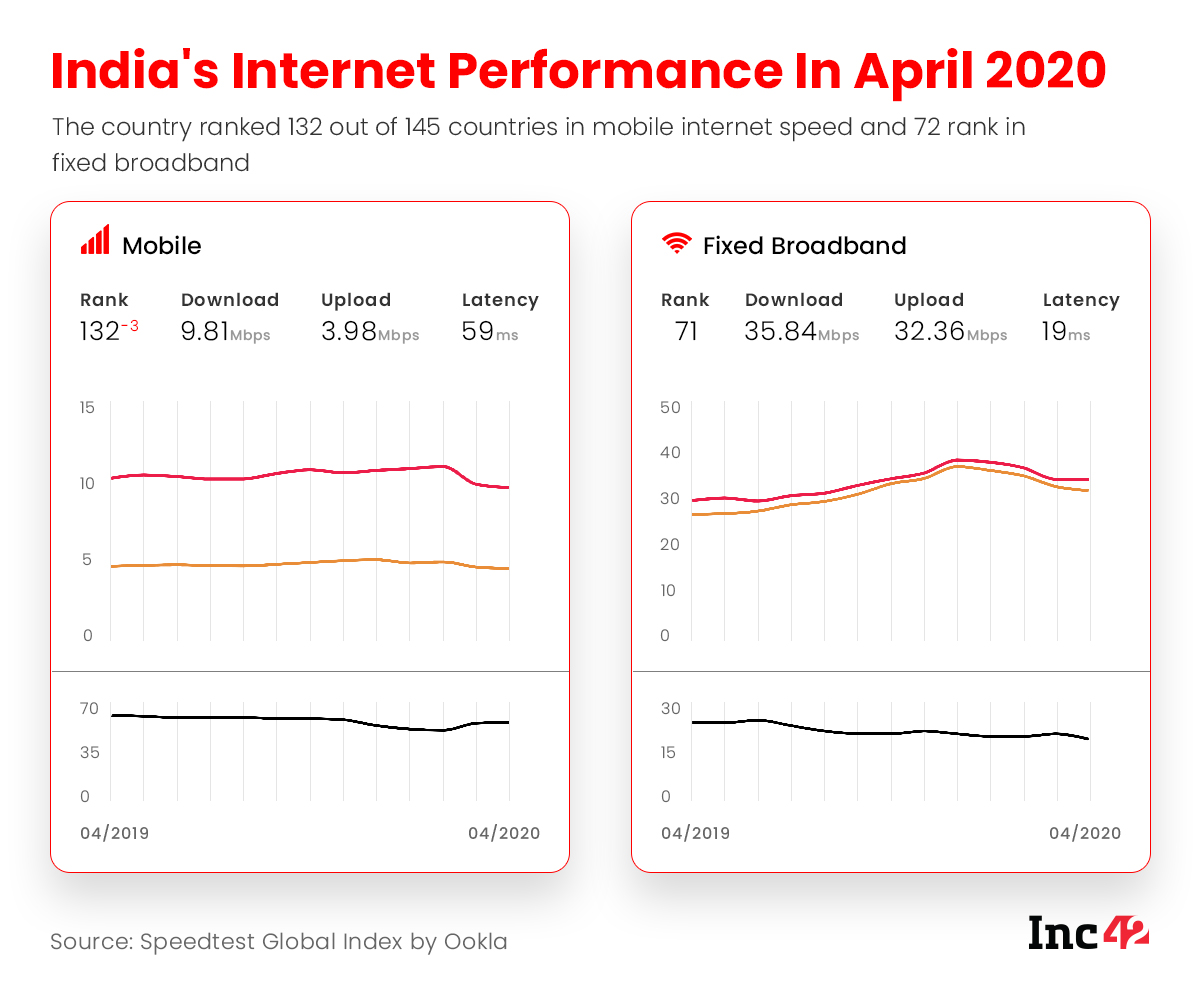 According to an IAMAI and Nielsen report based on IRS data, India has over 504 Mn active internet users as of November 2019 and growing. Even despite the proliferation of 4G internet thanks to Jio and the rising digital penetration in rural areas, not everyone is able to get steady connectivity through the day — either due to latency or network overload.

Besides the disparity in students’ access to basic internet infrastructure, at home students also have to battle many social-political differences. Factors such as access to a room of one’s own, control over using phones or computers, burden of sharing household work also add to the existing barriers in the penetration of online education in India.

Education Is A Right, Not A Privilege 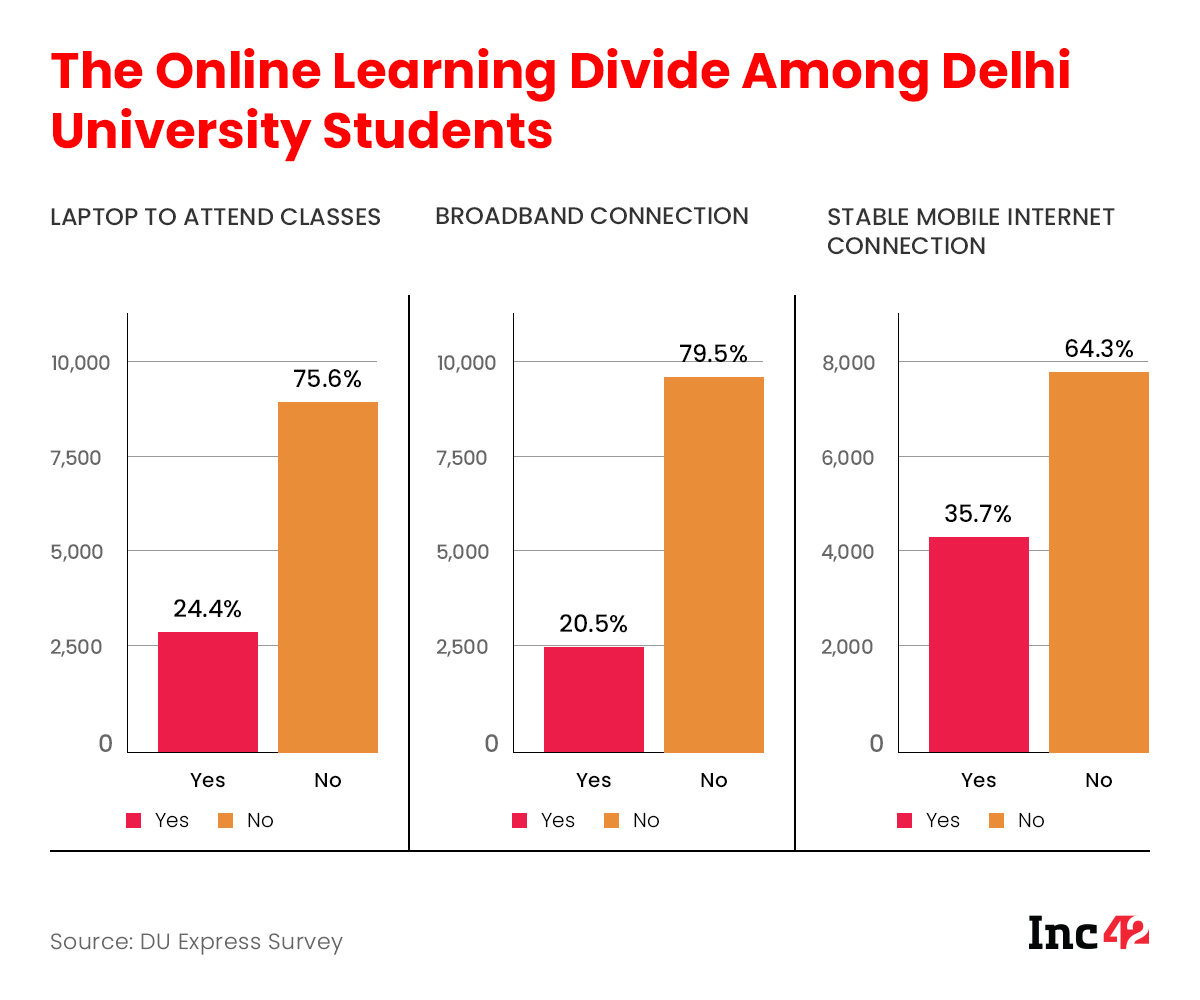 Other public-funded universities such as TISS and IIT are also conducting similar surveys to map the student’s device access, technology and learning experience. IITs’ online survey includes questions about the location, the internet download/upload speed, frequency of power cuts, the internet service provider, and more.

Some universities like DU had announced online examination plans, which were met by protests by various student organisations such as Akhil Bharatiya Vidyarthi Parishad (ABVP), National Student Union of India (NSUI), All India Student Association (AISA) and others. The students have called online examinations’ discriminatory, as all students don’t have equal access to digital education.

An NGO Justice For All has also filed a PIL in the Delhi High Court contending the school’s decision to conduct online classes. It noted that free laptops or android mobile phone with high-speed internet should be provided students belonging to the economically weaker section. Following which, the high court issued a notice to the Delhi government, CBSE, municipal corporations and 10 unaided private schools to respond to the plea.

Indian Institute of Technology (IIT) in Bhubaneswar has also developed a technology tool equipped with features like virtual proctors and invigilators, for conducting all types of institute exams online. Meanwhile, IIM Kashipur held its trimester exams for first-year students digitally this quarter but witnessed only 60% student turnout.

Last week, India’s finance minister announced the PM eVidya scheme to ensure students have multi-mode access to online education. Under this scheme, the government has announced the launch of 12 new DTH channels, one channel for each class (standard 1 to 12). The scheme also plans to make use of radio, community radio and podcasts as a way to enable distance learning for all students.

Such multi-modal access to education might be satisfactory for primary education, but at college and university levels, students require access to much more resources than a couple of course books and a one-way lecture by the professor. Which is not accessible to all students with the current state of India’s internet infrastructure.

In countries like India with a vast digital and economic divide, online education only seems to be widening the chasm between the have and the have-nots. The privileged get the opportunity to access better resources at better rates, while the marginalised continue to lag behind.