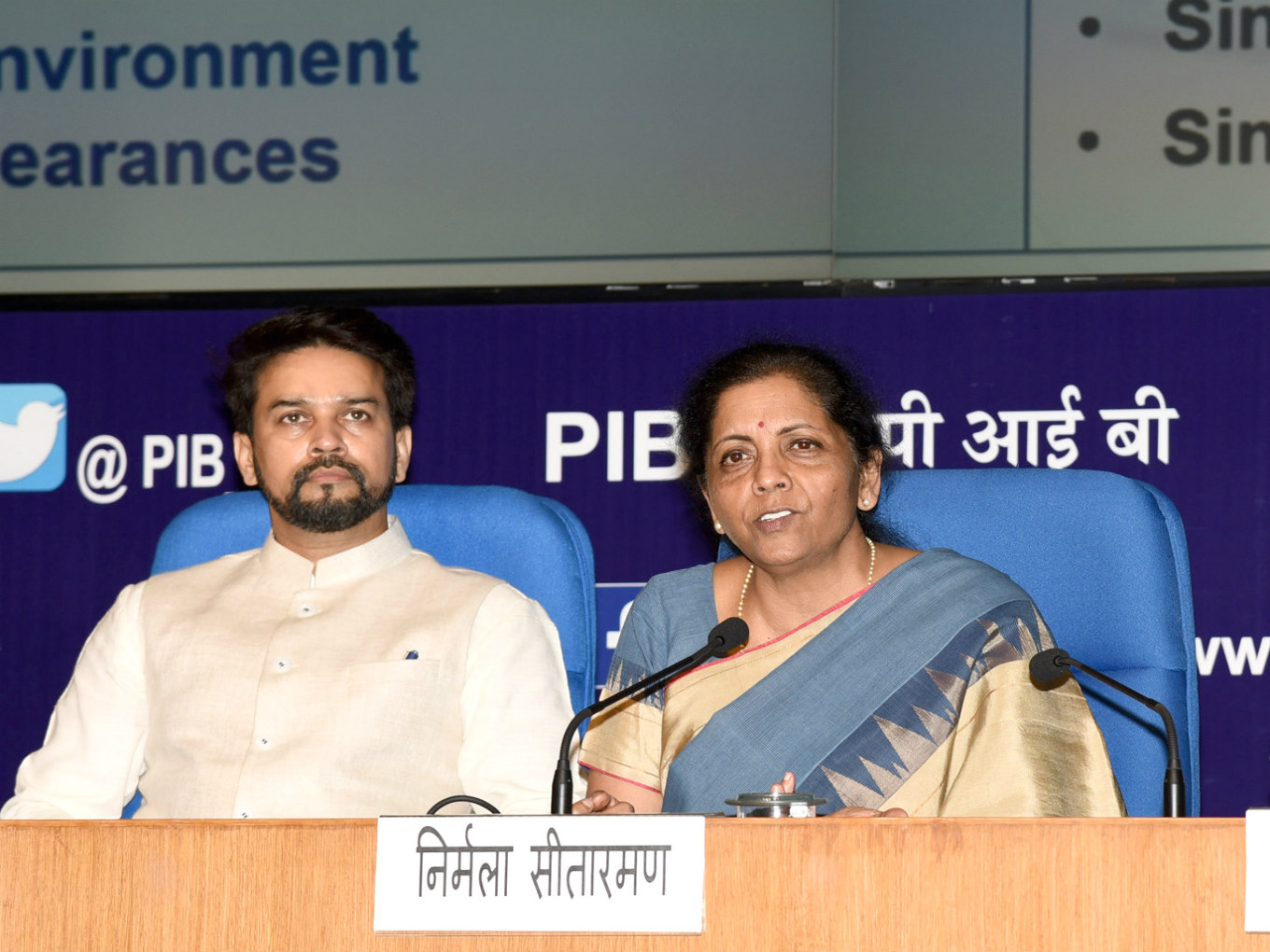 No tax harassment will take place and no independent inquires, assured the FM

Filing GST to be simplified and GST refunds will be automated, the government said

Even commerce minister Piyush Goyal reiterated BJP’s commitment to creating 50K startups by 2024, there are a plethora of issues and roadblocks on the way that needed government’s immediate attention. The chief among these is the economic slowdown, which has hit several sectors badly and impacted growth and jobs. And to compound problems for the industry, there’s a great lack of clarity among startups and companies over tax issues, which brought up the ghost of tax terrorism.

Unlike the 2007-2008 global crisis, the latest financial stress has badly hit India with thousands of jobs being scrapped in pretty much every industry, and companies shutting down, not to mention the direct and indirect impact on investments in startups as well.

But angel investor and former CFO, Infosys Mohandas Pai asserted that the lack of clarity on taxation did not arise at the 2019 Union budget, but in the annual union budgets of the recent past,  which ignored the widely-practised tax terrorism and the lack of transparency in handling tax issues.

In contrast to the natural act of responding to media queries over financial stress issues such as the rupee plunging to a nine-month low and other ‘policy issues such as the so-called tax terrorism, Sitharaman imposed severe restrictions over journalists entering North Block of the parliament. PM Narendra Modi is already unpopular for not addressing a single press conference in the last five years of his tenure as PM.

Speaking on financial stress, Apollo Hospitals EVP Shobana Kamineni told NDTV. “Every country goes through its stresses and our country has a few more going on. It is global stresses, it’s environment stresses, it is job stress, it is the tensions that are coming from all over. So I would say that we are in a state of high blood pressure.”

This only led to the question — Is the government listening? Is the Modi government responsive?

On August 23, while PM Modi was in France addressing the Indian diaspora and emphasising the government’s focus on ease of doing business as well as ease of living in India, at home the finance minister addressed the Indian media undoing the damage done during the Union Budget.

Having addressed already in the past in bits and pieces, the finance minister reiterated a slew of transforms pertaining to MSMEs, tax harassments, GST return simplification, angel tax, enhanced surcharge from long term and short term capital gain and more.  Sitharaman said, “I want to assure that we are responsive and the reform process will continue. There is no intention to prosecute.”

The announcements have come at a time when the International Monetary Fund (IMF) has raised doubts over tax revenue collection estimates for 2019-20 and the GST efficacy.

‘I Am Listening’, Says FM

Sitharaman, responding to the very question of ‘responsiveness’, said, “I want to ensure… we are responsive.”

By transferring the Department of Economic Affairs Secretary Subhash Chandra Garg who played a key role in drafting the recent budgets immediately after the Union Budget 2019, Sitharaman had probably already conveyed the message to the industry.

On August 23, the conference was to initiate a slew of reforms to tranquilise the industry and affirm the notion that the government is hearing the criticism and is doing something about it.

Filing GST forms and getting refunds have been tedious since the goods and services tax (GST) was announced on July 1, 2017. Despite hundreds of reforms carried out over the last two years, GST continues to haunt MSMEs and startups.

Besides GST, startups have also had to deal with the angel tax terror, which resulted in a steep decline in seed stage funding in the Indian startup ecosystem. DataLabs by Inc42 data shows that the total capital inflow into Indian startups between 2014 till the first half of 2019 was more than $51 Bn across 4,554 deals which are growing YoY.

Responding to these concerns, Sitharaman said, “The number of forms is really being worked upon. I surely assure you that sooner the GST will come up with even more simplified with less number of forms. The refund process I must underline has almost become automatic. The refund should be going through a process of free flow. Even this Sunday, I am holding a meeting with GSTN people to make sure to identify where the glitches are, in terms of the flow of refunds. So that, it does not affect people.”

Welcoming the move, Archit Gupta, founder & CEO ClearTax said that the measures to improve liquidity and improve payments crunch for MSMEs was much required. This is also a push for MSMEs to be GST compliant, uploading GST invoices will be essential to become eligible for bill discounting via TReDs. “This will prepare MSMEs for the GST simplified returns which are being launched soon. We are expecting more measures to remove complexities in GSTR-9 and GSTR-9C,” he said

“Removal of surcharge specifically for equities (both STCG and LTCG) has been done to boost the equity market, however, impact may only be temporary for markets. Markets are suffering due to the general economic slowdown, some measures have been introduced but may not be enough for immediate revival,” Gupta added.

While the late Arun Jaitley who was the former finance minister showed little interest towards tax complaints, it took a long time to the former commerce minister Suresh Prabhu to minimise the tax harassments of startups under Section 56(2)(viib) of the I-T Act, Sitharaman in her short span as finance minister has rather responded quickly with what was called for.

Reiterating what she said in her 2019 Budget speech, Sitharaman said, “To mitigate the genuine difficulty of startups and their investors. It has been decided that Section 56(ii)(viib) shall not be applicable to DIPP registered startup.”

Directly taking on the claims of tax terrorism, she said, “It has also been decided to constitute a dedicated cell under a member of CBDT for addressing the problems of startups. A startup having any I-T related issue can approach the cell for quick resolution of the problem.”

The Central Board of Direct Taxes has exempted 702 startups (till June 21) under Section 56 (2) (vii) of the Income Tax Act, 1961. The minister of commerce and industry Piyush Goyal had earlier informed the parliament.

Applauding FM for removing angel tax for startups, Gaurav Jalan, founder & CEO, mPokket said, “The Angel Tax on start-ups and their investors has been an issue for the sectors. Withdrawal of this tax and set up of a special cell led by a member of CBDT for addressing problems of startups will play a catalytic role, as existing and potential investors will be encouraged to continue to play their part in enabling the entrepreneurial machinery. These measures will further the cause that startups come to be associated with – drivers of innovation, economic growth and job creation in the country.”

Seconding Jalan, Abhishek Gandhi cofounder of RupeeCircle said, “For startups like us who are looking to raise funds, this is a sigh of relief as it opens up opportunities for both startups looking to raise funds and potential investors. All startups had been asking the government to reconsider this since a long time and it is good that the government has finally addressed this.”

“All notices will be disposed of within three months from the date of reply. No assessee will have do anything after three months once he has given the reply.” – Nirmala Sitharaman

Despite all the hullabaloo made by startups and investors, the Modi government in its first term had failed to address this. Nirmala Sitharaman however assured that there will be no room for any such harassments by I-T officers.

She said, “Issue of I-T orders, notices, summons, letters etc shall now be issued through a centralised computer system which will contain computer-generated unique documentation identification number. Thus, if there is any notice being issued and some amount is being claimed on an assessee which without a central approval can’t happen. And also, the amount stated there will either be resolved or resolved in favour of authority and therefore the tax will be paid but the amount shall be what was claimed and not more or less. This will be available for the assessee to see it so that he knows what he is being asked. He can even complain. This is one way through which the harassment angle can be addressed.”

The FM added that if the notice or order does not have the DIN (Document Identification Number) It need not be taken seriously by startups. The government also assured that all the notices, orders issued so far will be cleared by October 1, 2019. “And, if some of them remain, they will have to be uploaded again to be a valid order. So, the assessee can be very clear that it is very transparent, does not depend upon I-T assessing officers. And no one can pursue independently at their own.”

One Government, Many Voices

At a time when various industry associations such as the North Indian Textile Mills Association and Tea Industry and Federation of Jharkhand Chamber of Commerce & Industries (FJCCI) are publishing advertisements and putting hoardings in front of government offices to tell the tale of their industry suffering, the chief economic advisor (CEA) Krishnamurthy Subramanian has asked the private sector to come out of this Papa Bachao (Father, save us) mindset.

India Inc can’t expect the Centre to pitch in every time some of its sectors go through a slowdown, he said.

“This 30- year-old man and must start to stand on his own feet. This adult cannot keep asking his father for help and live with the idea of personalizing profit and socializing losses.” – Krishnamurthy Subramanian

Subramanian’s statement was starkly different from Niti Aayog vice-chairman Rajiv Kumar’s view who too spoke of the financial crisis and termed the economic crisis “unprecedented in the last 70 years” only to retract the statement later.

“This is an unprecedented situation for the government. In the last 70 years, we have not faced this sort of liquidity situation where the entire financial sector is in a churn, and nobody is trusting anybody else.” – Niti Aayog vice-chairman Rajiv Kumar

Kumar called for extraordinary steps to tackle the economic slowdown.

Followed by Kumar, came Sitharaman’s long conference which seems to have brought the government’s responsiveness back on track.

However, leading voices in the government speaking differently on the matter will only confuse and complicate the matter further.

Further, startups believe the real relief will come only after all the announcements get properly implemented, as Aditya Kumar, founder & CEO Qbera stated: “On the rate reductions, our sincere hope is that banks do truly pass on the entire benefit to the customers, failing to which we would not see the desired impact on growth and the economy.”