Startup Watchlist: Top Media & Entertainment Startups To Look Out For In 2019

Startup Watchlist: Top Media & Entertainment Startups To Look Out For In 2019 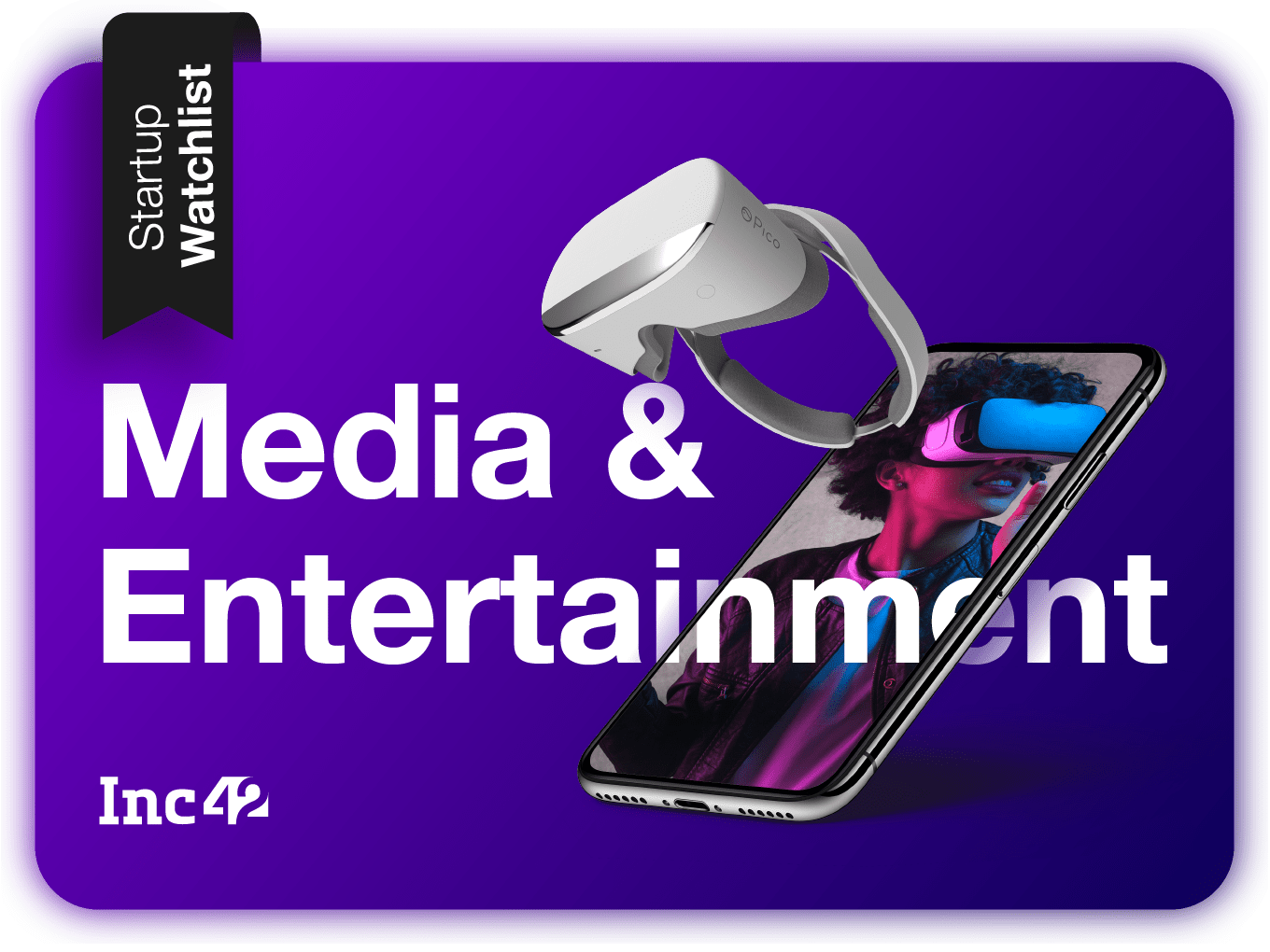 This article is part of Inc42’s Startup Watchlist, an annual series in which we list the top startups to watch out for in 2019 from industries such as agritech, AI, logistics, healthtech, and more. Explore all the stories from the ‘Startup Watchlist’ series here.

If you’re a Xennial or Millennial who grew up in the 80s and early 90s, you probably remember switching on the TV and waiting with bated breath through the hissing black-and-white screen for “transmission” to start. Entire families and neighbourhoods would gather around the idiot box to watch iconic shows such as Hum Log, Mahabharat, Malgudi Days, Chitrahaar, etc on Doordarshan. The government-owned broadcast station was the only source of entertainment in the pre-cable era. Even when cable TV came to India in the mid-nineties with its glitzy Zee, Sony, and Star Plus, it was still a luxury for many.

Fast forward to the 2010s and you’re are spoilt for choice with entertainment options — from mobile games to DTH sets giving access to hundreds of channels to OTT players such as Netflix, Amazon Prime, and Hotstar competing for the digital audience. If anything, there is a problem of plenty, with new shows and movies being added everyday in English as well as vernacular languages, and you probably have enough on “My List” to keep you through the next year.

Powered by trends such as lower internet costs, cheaper devices, and increasing access high-speed, affordable internet, Indians are shifting en masse towards digital consumption. The Indian digital media segment is expected to be valued at $2.8 Bn by 2020 with digital ad spend expected to grow at 23%-28%, according to an EY report.

India will be the 10th-largest market for OTT in terms of revenue in 2022, with mobile internet subscribers set to double from 406 Mn in 2017 to 805 Mn in 2022, according to PricewaterhouseCoopers.

To help you keep track of what is happening in this booming, noisy, and increasingly crowded segment, Inc42 has curated a list of some of the top media and entertainment startups in India that one needs to watch out for. Without further ado, here they are: With a user base of 39 Mn users, New Delhi-based POPxo, which is a women focussed digital media startup in the entertainment space, raised $5.5 Mn (INR 37 Cr) in April, which was yet another endorsement of the digital media platform that produces content exclusively for women.

“POPxo has always envisioned itself as a space that provides content that speaks to women and girls, instead of talking down to them,” said Priyanka Gill, the founder and CEO of POPxo, in an earlier conversation with Inc42. 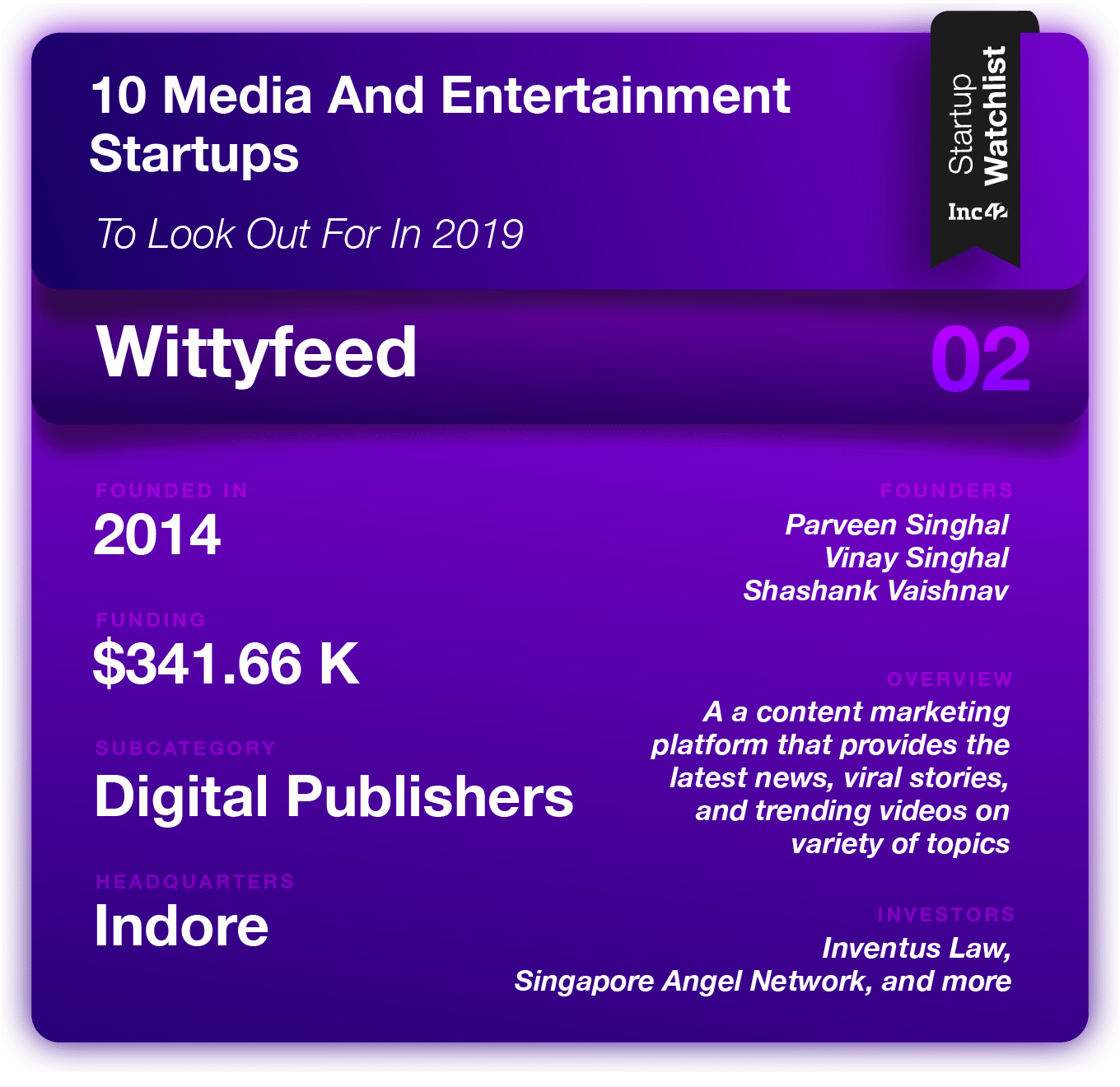 Indore-headquartered WittyFeed, a content marketing platform, has reached 250 Mn pageviews per month in the short span of three years (in 2017). It claims to have an audience reach of more than 1 Bn and gets 80 Mn unique readers and 160 Mn video views every month.

Vatsana Technologies (the parent company of WittyFeed), extended its operations six-fold last year by creating and simultaneously adding half a dozen new and varied brands to cater to unique audience demands. Each of these products is customised to the likes of individual users through an advance AI which does the content clustering for them.

The WittyFeed content is available in Spain, the US, the UK, and India. 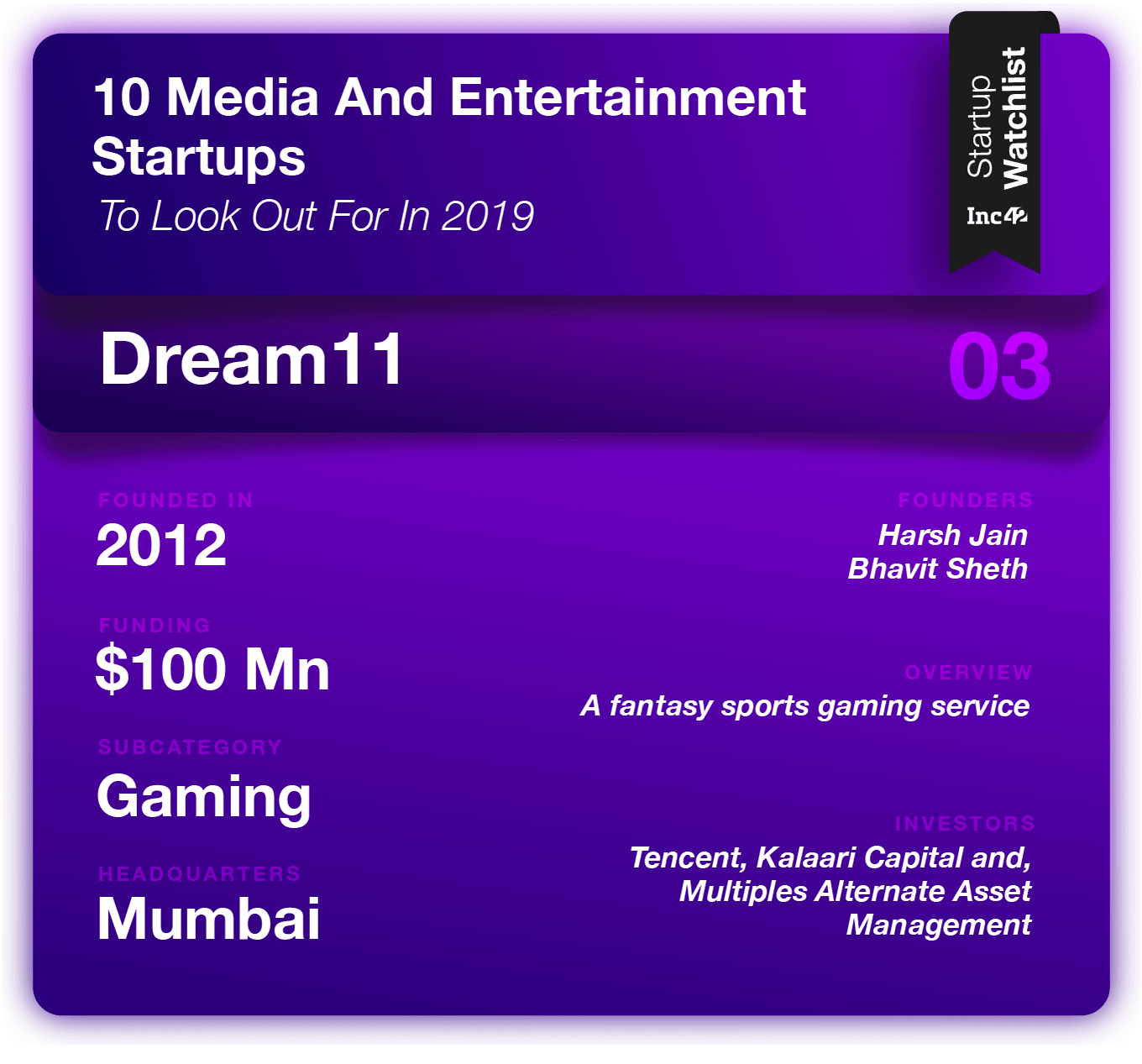 In September 2018, Dream11, a fantasy sports gaming service, raised $100 Mn in a Series D funding round led by Chinese internet conglomerate Tencent, reportedly valuing it at around $500 Mn.

The Mumbai-based company was named among the Top 10 biggest and most popular trends of 2018 in India, according to a report by Google, which saw gaming app PUBG Mobile take the No. 1 spot.

Dream11 claims to have more than 4 Cr users playing fantasy cricket, football, kabaddi, and NBA and has set itself a target to grow to 10 Cr users by 2019 so it can become India’s biggest sports gaming platform. 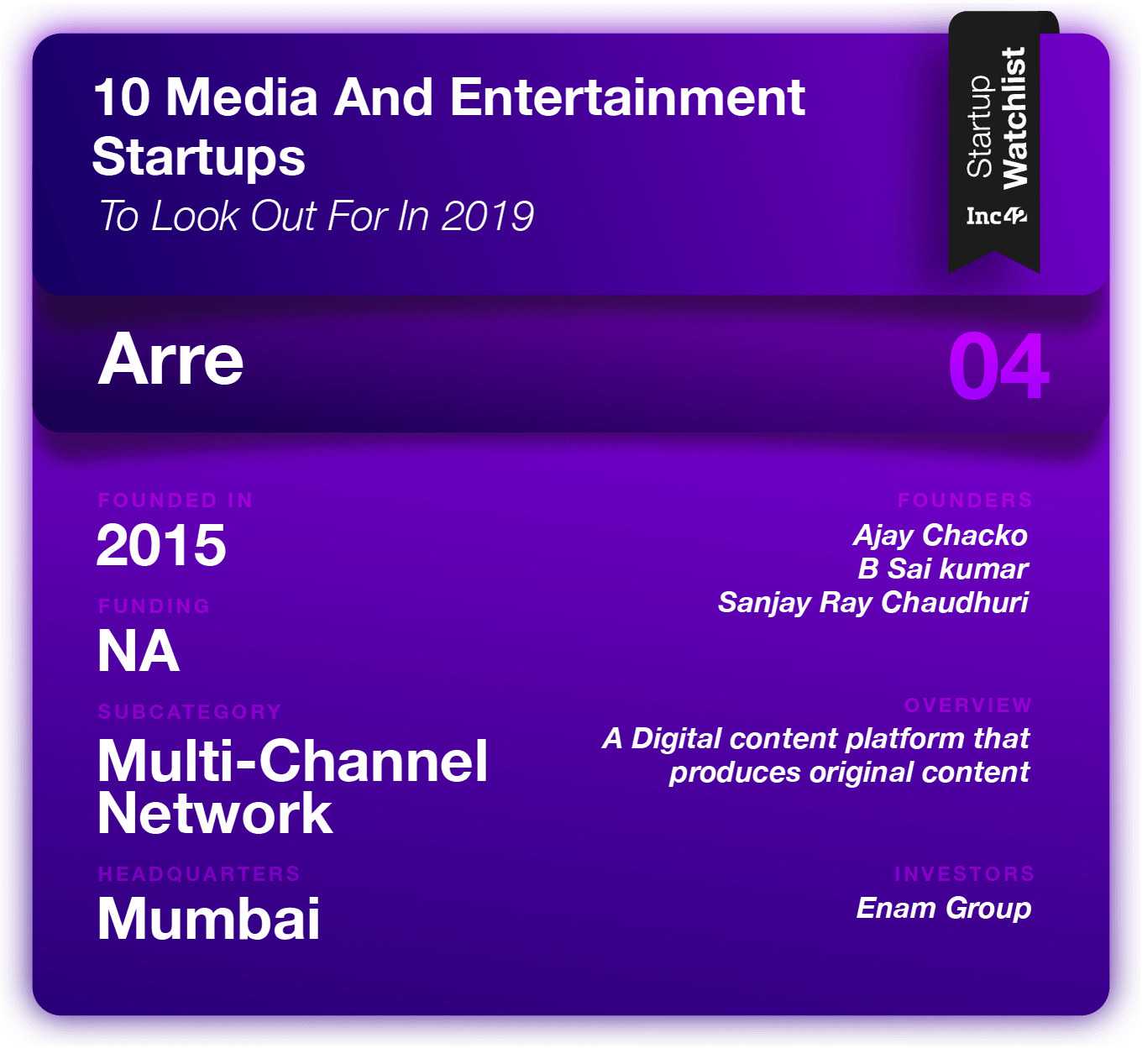 Launched in October 2015, Arre is a open OTT platform that creates fully original content for its own platform (arre.co.in & Arre apps & social channels) as also for  distributing across more than 20 platforms that the company says reaches more than 200 Mn people. It offers content across formats such as video, audio, text, and doodles, across various genres such as fiction, factual entertainment, documentaries, social experiments, and more.

In 2016, Arre raised an undisclosed funding from investment firm Enam Holdings for a minority stake in the company. With the deal, one of the co-founders,Ronnie Screwvala exited the company, while the other two founders, Sai kumar and Ajay Chacko, along with the Enam group acquired the remaining stake held by Unilazer Ventures and Screwvala. 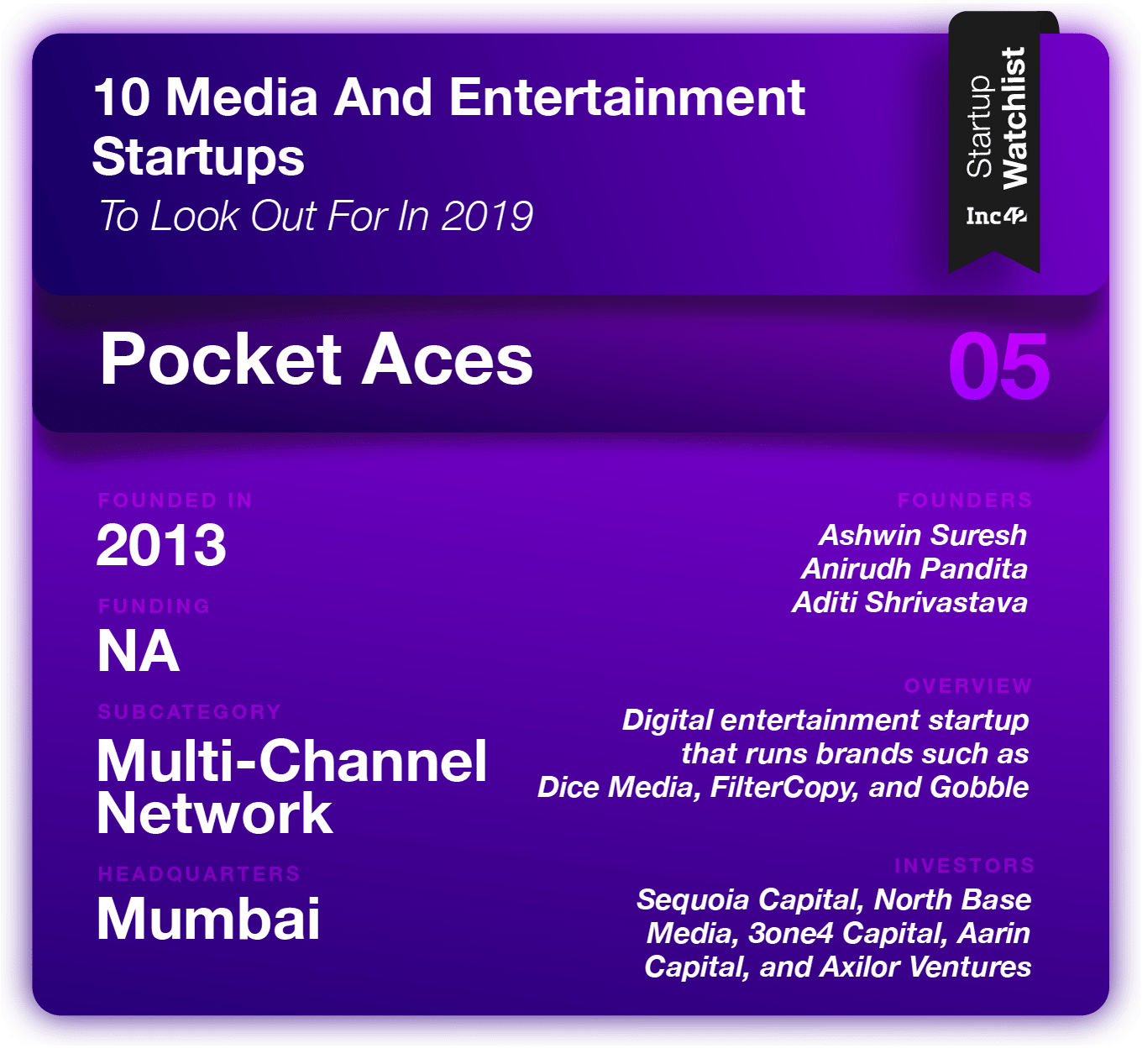 Mumbai-based Pocket Aces creates and distributes original content for the millennial audience. Pocket Aces has reached 50 million unique views each month and claims to have 300 Mn views a month overall.

“As more and more people get access to the internet via their phones, their taste is evolving. Right now, there are so many creators who are doing sexist, disability content…its old school, cheap humour. Many Tier 2 audiences have come to our platform and shows like Adulting (a story about two young women trying to handle the responsibilities of being an adult in a urban city) have seen good viewership numbers  from Tier 2 cities,” said Anirudh Panita, cofounder of Pocket Aces, in an earlier conversation with Inc42. Vokal is a peer-to-peer knowledge and opinion-sharing platform for India’s non-English Internet users. The Bengaluru-based company currently provides content in Hindi and plans to launch in multiple languages.

Vokal also has a live video streaming feature and claims to have more than 300K questions on its platform. It gets over 1,000 questions every day on unique topics.

The platform, which raised $5 Mn in a Series A funding round led by Chinese investor Shunwei Capital and 500 Startups in July, has over 0.5 Mn monthly average users (as of September). 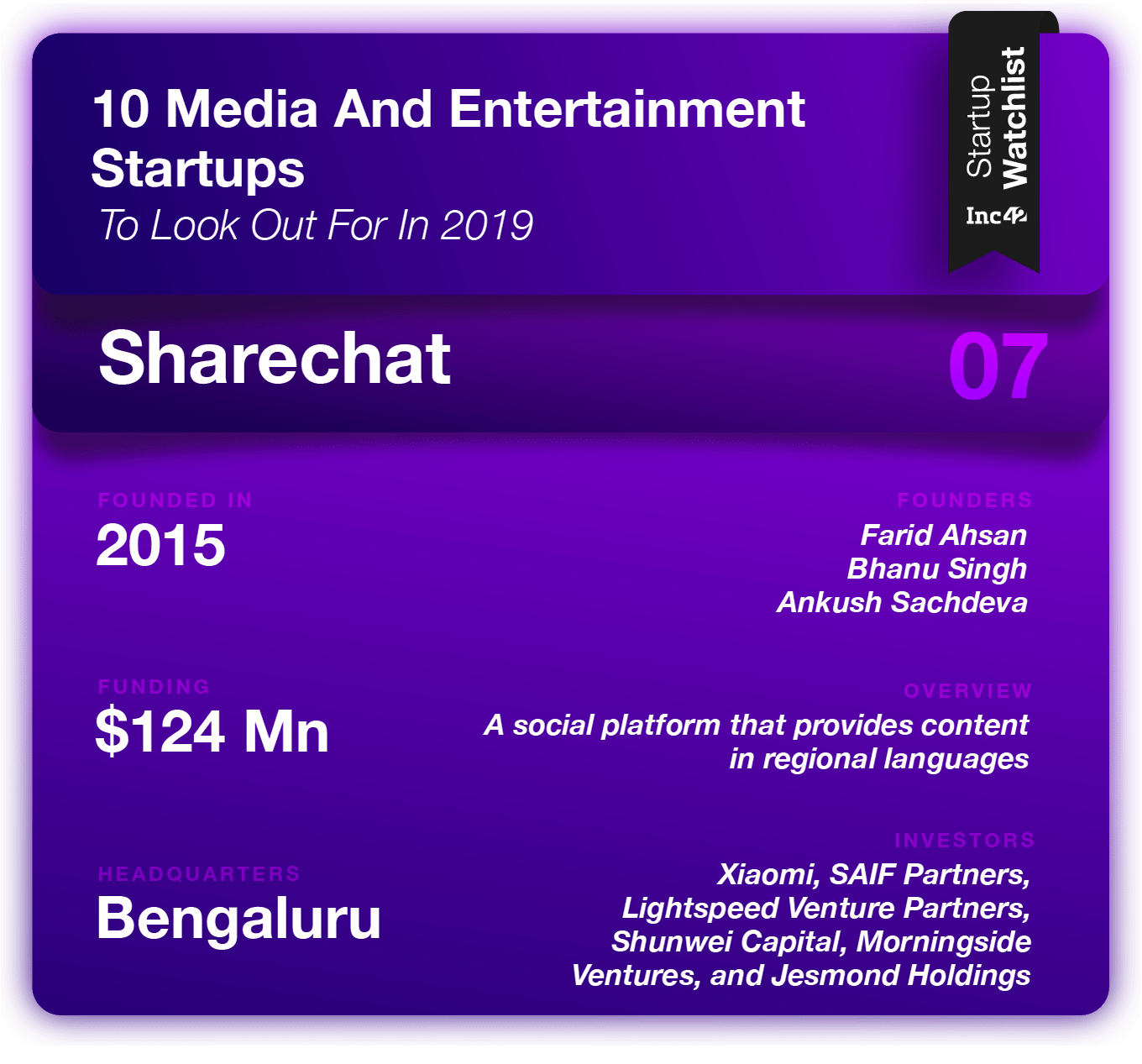 Last year (2018), Sharechat, a regional language social platform, saw its valuation shoot up seven times when it raised $100 Mn (INR 720 Cr) in a funding round.

The Bengaluru-based company has seen daily active users increase from 5 Mn in April-May to over 8 Mn in September.

Sharechat is reportedly looking to go deeper into micro-markets, including northeast India, before it begins working on monetising its service next year through advertising, influencer marketing, and in-app purchases. 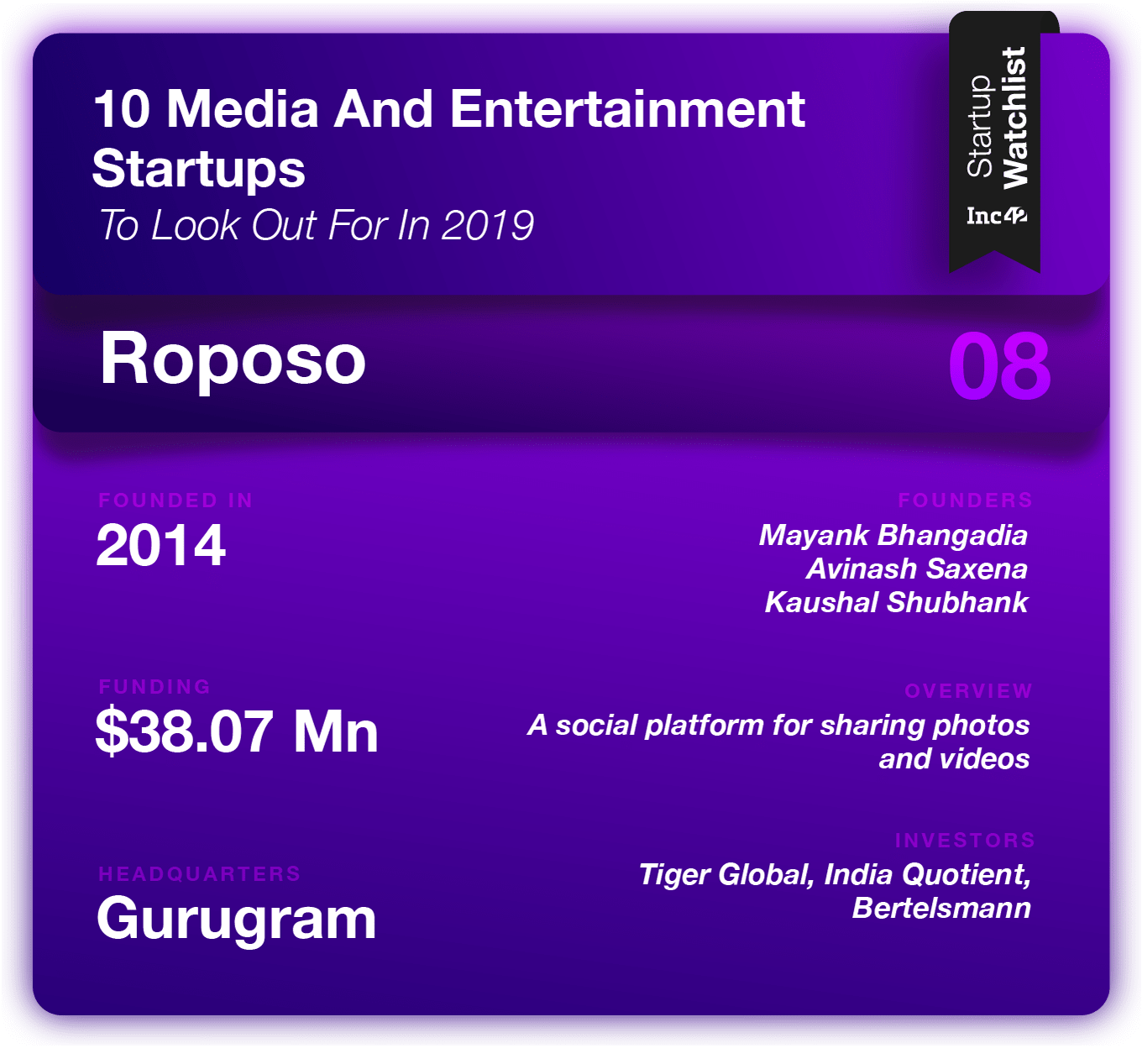 Video entertainment app Roposo started out as a fashion discovery platform that pivoted its business model in 2017 to a short-video application.

Roposo rebooted as ‘TV By The People’ and continued to grow marginally. It claims to have recorded 75X growth in its daily active user base since then (December).

Towards the end of 2018, Roposo raised $10 Mn (INR 72 Cr) in a fresh funding round from existing investors Tiger Global and Bertelsmann India Investments. 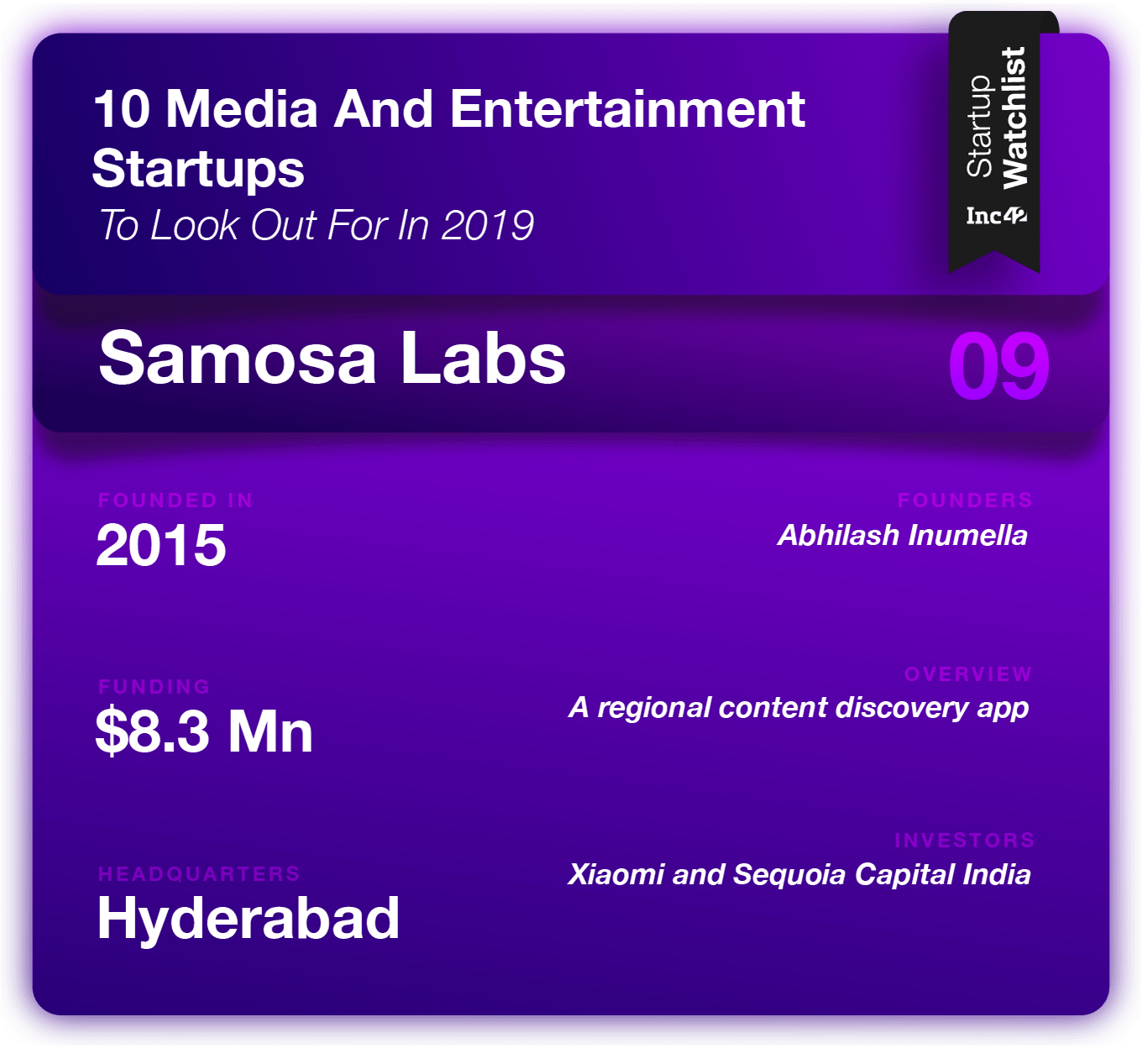 Vernacular social media and chat entertainment app Samosa Labs is another example of a promising digital content startup expected to do well riding the wave of vernacular content.

Samosa Labs enables user-generated audio and gifs to be shared across social media platforms and in February of last year, the company started offering video-based content as well.

2018 was a really good year for the startup wherein it got investors such as Chinese mobile manufacturer Xiaomi and venture capital fund Sequoia Capital in a round where it raised $7 Mn. Mobile gaming platform PlaySimple will be looking to make most of 2019, a few years after it raised $3.8 Mn (INR 27 Cr)  from top venture capital firms, SAIF Partners and Chiratae Ventures (formerly known as IDG Ventures India).

The Bengaluru-based startup was founded by Siddharth Jain along with his Zynga( an American social game developer) colleagues Suraj Nalin and Preeti Reddy and software engineer Siddhanth Jain.

Estimates suggest that India’s mobile games market will be worth $1.1 billion by 2020, and number of users projected to become 628 Mn by then and this is something that PlaySimple will be looking to ride.

While these are the Indian media & entertainment startups to watch out for in 2019, stay tuned for the next edition of Inc42’s Startup Watchlist, in which we will be featuring Indian Healthtech startups that will make it big in 2019. Click here for more stories!