No Time To Pause: The Dark Side Of The Attention Economy

No Time To Pause: The Dark Side Of The Attention Economy 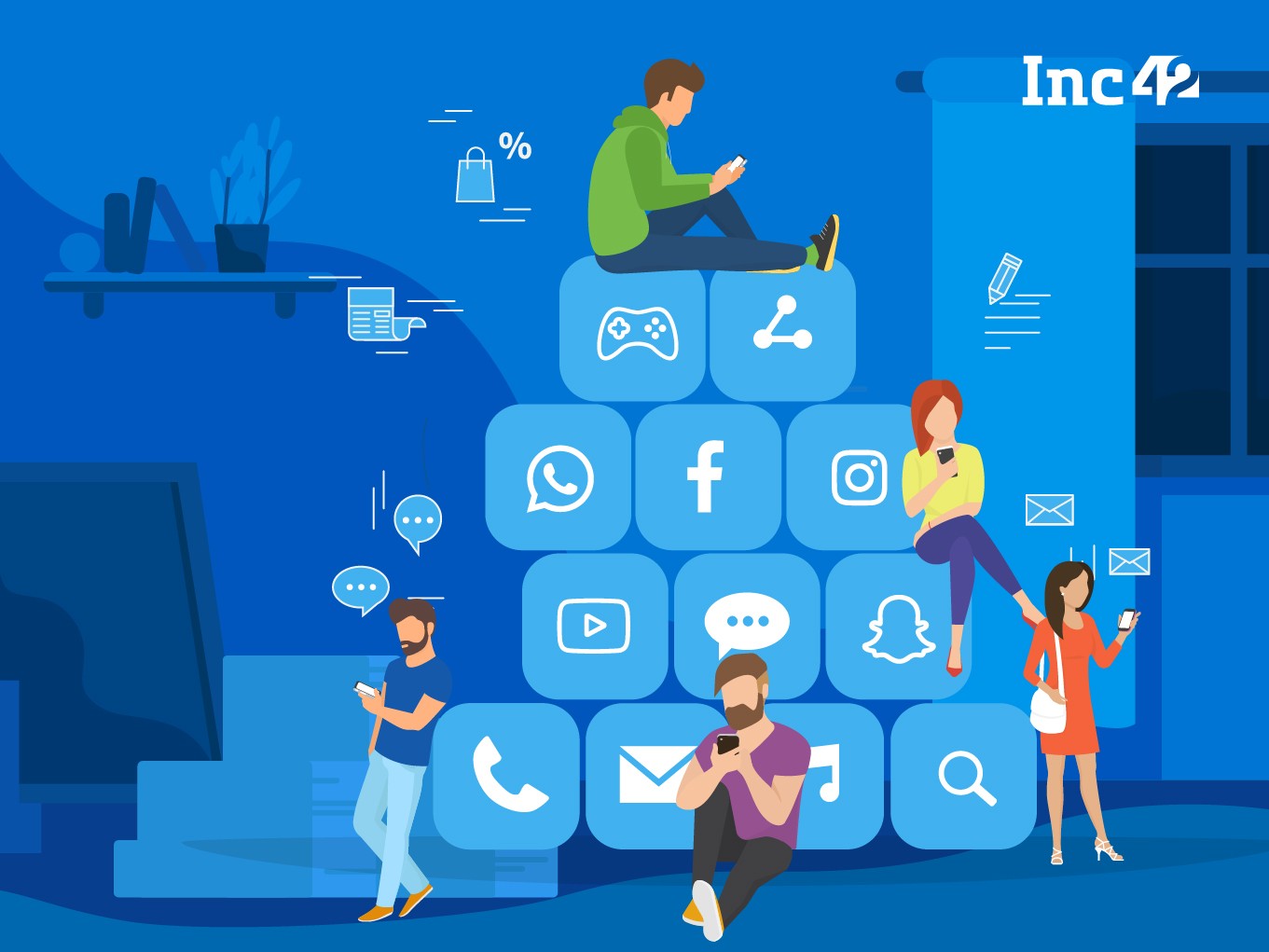 The digital economy has turned into the attention economy — an umbrella of social media, online news, video, music and gaming

What happens when the overconsumption of digital media in a quarantine leads to digital fatigue?

We’ll assume we have your full attention. It’s not like you have anywhere to go these days. And no, walking out to your terrace or balcony does not count. Now that all our interactions have gone digital, the attention economy is thriving.

This digital world has not only been the biggest enabler for people in the pandemic, but it’s also the only way to step out from home and be part of a community —  from chat groups finding ways to fight Covid-19 to friends playing games while on a video call to charity campaigns and business webinars, virtual music concerts.

The digital economy has turned into the attention economy — an umbrella of social media apps, news websites, video streaming, audio streaming and online gaming, which has experienced an unprecedented boom in the past month. Before the coronavirus, playing games at home or binge-watching shows was a choice, while today it’s a coping mechanism.

Many have compared the quarantined world today to the times after the World Wars or the Great Depression of 1929 or the global economic meltdown of 2008-09. The economic impact, the shift in consumer behaviour and loss of stock market value mirror those crises of the past, but the survival strategies in this pandemic cannot be farther apart from how people overcame those past catastrophes.

For one, while war inspired social resilience through the power of community, populistic revolutions and mutual support, the pandemic has forced us to live in silos, physically distant from neighbours, friends and colleagues. It has also forced more and more people into a life where pretty much every interaction is digital. A life where every waking minute is spent engrossed in the virtual world — our collective attention grabbed by the digital world. 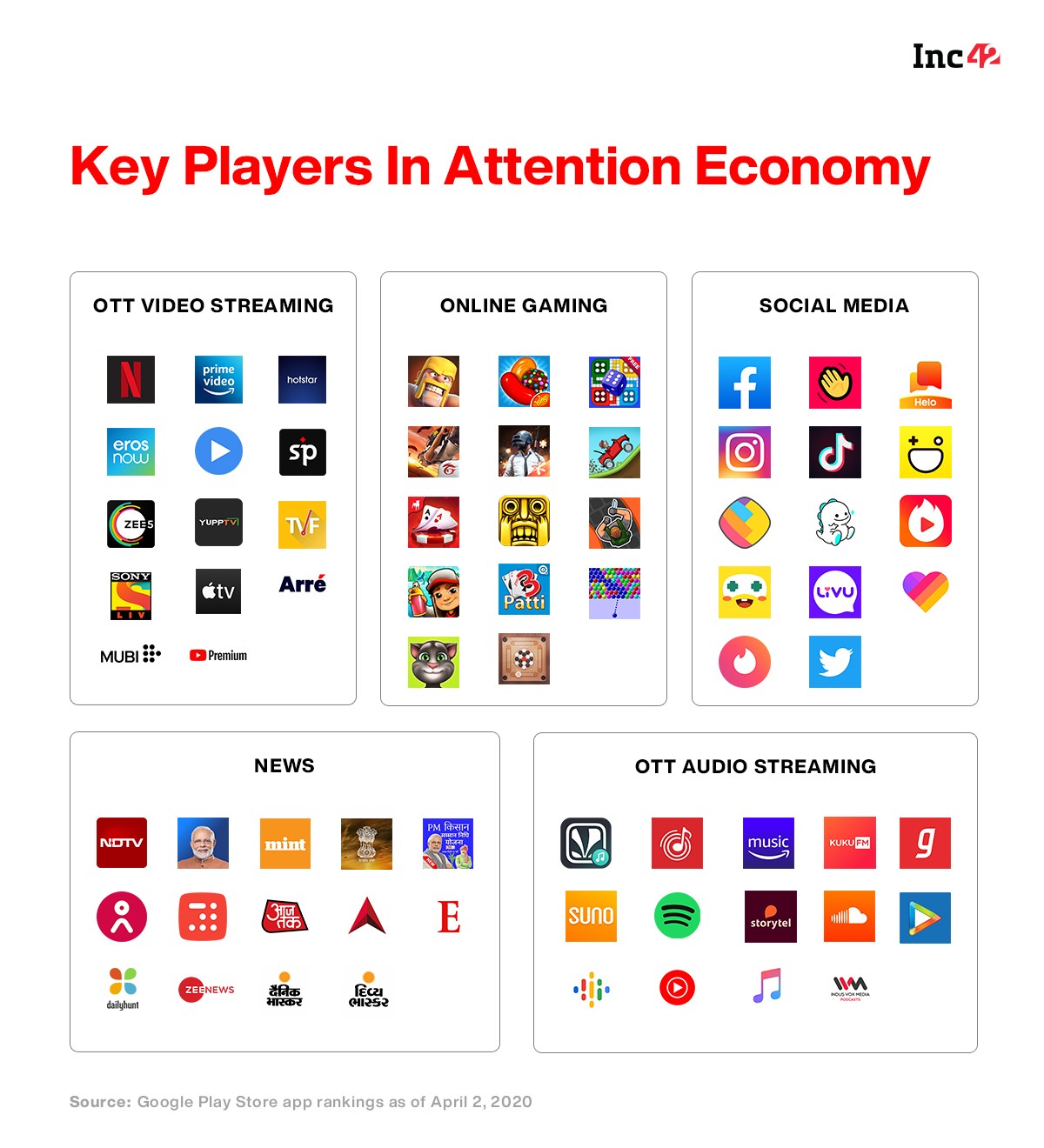 According to an AppsFlyer report, India has been experiencing a gradual increase in app installs and sessions since March 7, when the number of reported Coronavirus cases in the country started to climb. In fact, sessions have since increased by 65%, and organic installs by 50%.

The attention economy thrives on a captive audience and with people being cut off from the outside world, everyone is glued to screens to cope up with the sudden change, with no other alternative in sight. 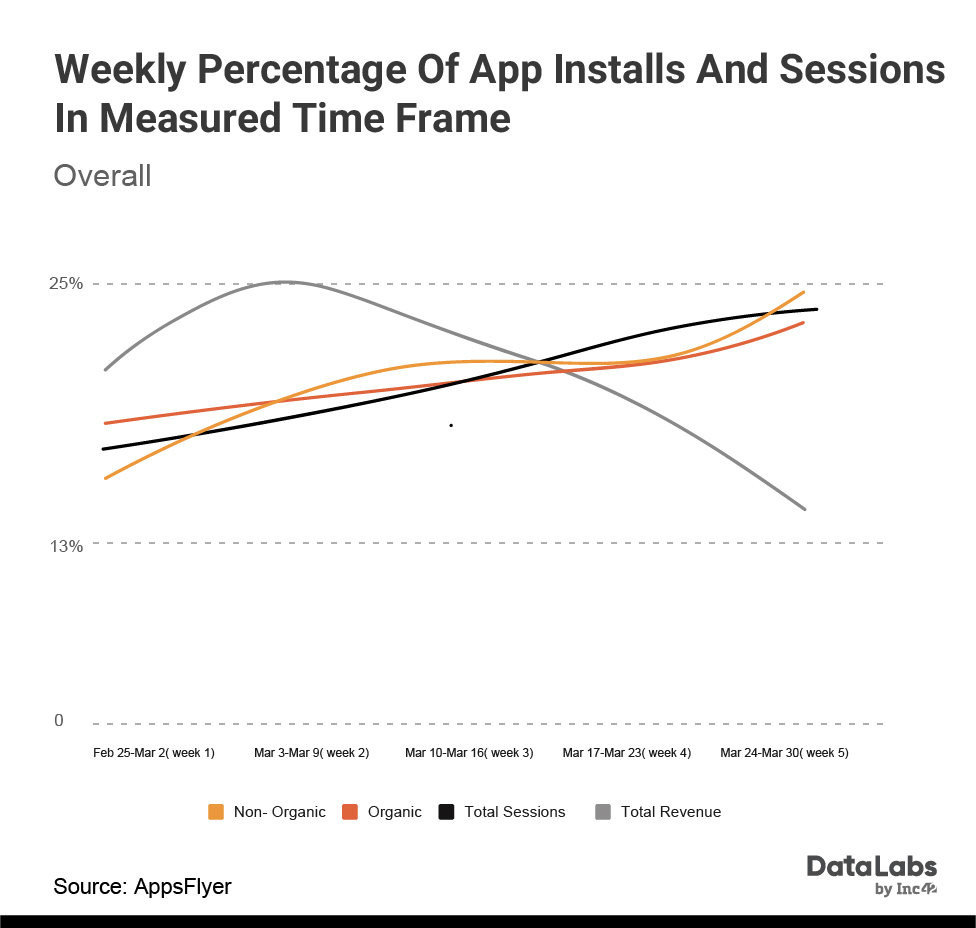 Bhopal-based psychologist and academician Dr Geeta Narhari also emphasises on digital entertainment and consumption becoming a crutch for locked-down individuals. “People are increasingly looking at digital entertainment as a coping mechanism. When you’re playing online or using social media you feel like there’s a virtual partner, and so the lack of socialisation, the lack of entertainment elsewhere all are being solved by these virtual interactions,” she told Inc42.

For instance, in the OTT space, Netflix claimed to have achieved its yearly viewership targets in the first three months of the year itself. Zee5 noticed a 15% spike in daily active users in March along with an increase in binge-watching and double-digit growth in long-form content consumption.

In terms of casual gaming apps too, India’s organic installs have jumped 75% since a total lockdown was imposed on March 21. There was also a dramatic rise in non-organic activity in more serious games —  a staggering 205% increase since March 13.

Beyond binge-watching, Indians have also embraced online games by the droves. The excitement of a multiplayer game is down to the teasing and banter among players, as well as the transposition of personal dynamics into game strategies. As quarantine makes it impossible to experience that togetherness in a physical space, people have devised newer ways to imitate this behaviour in the digital realm. 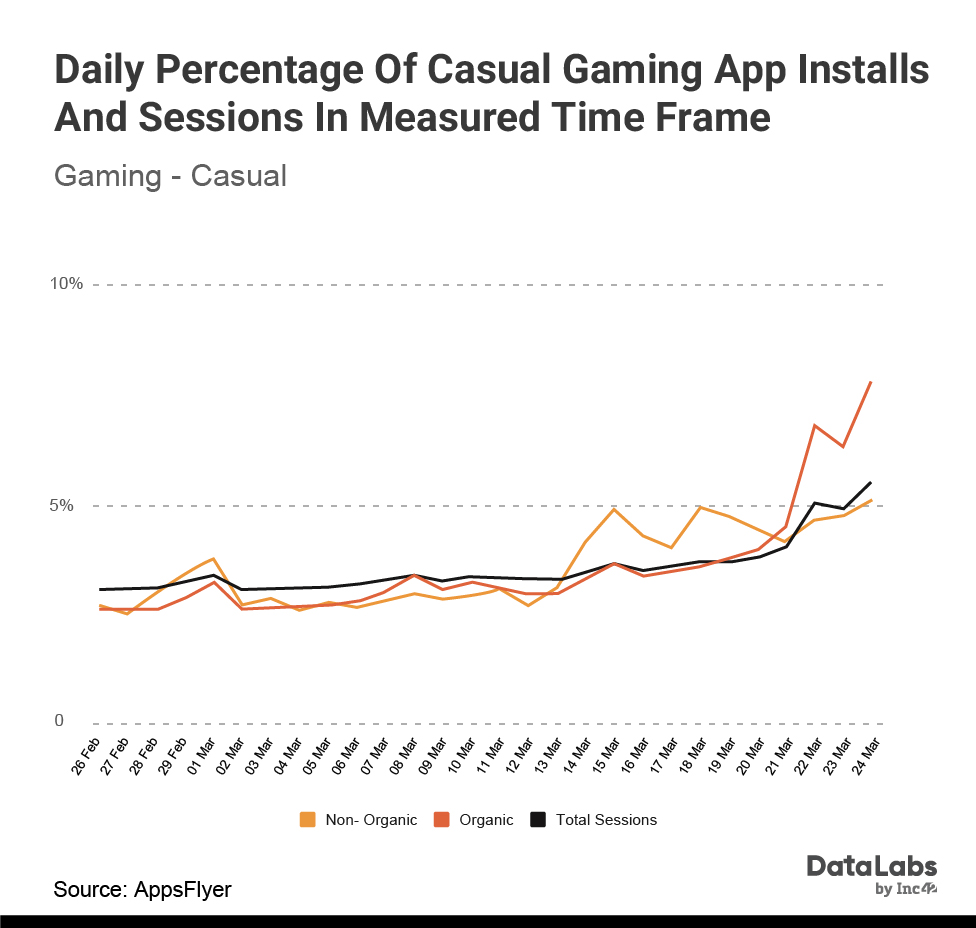 Apps like Houseparty, Plato, Bunch and Hago have enabled people to look and talk to each other while they play games or co-browse the internet. Owned by Fortnite developer Epic Games, Houseparty managed to add 2 Mn users within the week of March 20, becoming one of the most downloaded apps in the world.

For Ayush Jaiswal, cofounder and CEO of Pesto Technologies, such games have proven beneficial in terms of dealing with mental health challenges posed by the lockdown as well. Jaiswal added that there is a lot of real-time collaboration happening on Houseparty and other apps, besides just games.

The flipside of such skyrocketing popularity for new products is that often people get tripped by flaws and vulnerabilities. Like how several Houseparty users took to Twitter highlighting that their PayPal, Netflix, Spotify, and online-banking accounts were compromised after they downloaded the app. Or how Zoom has decided to prioritise security and stability over new features in light of this dramatic rise in adoption, which has brought attention from hackers and cyber criminals.

With so much time on hand and inadequate accountability, people have increasingly sought user-generated content. As we all would agree, Netflix shows and Amazon Prime movies lack the virality and human touch that a TikTok, YouTube or Instagram Live offers. That might be the reason why these applications have seen a surge in usage over the past few weeks as well.

In Italy, Instagram Live and Facebook Live views doubled within the week of March 21, amid national lockdown. Also, home workout posts in America increased five times in the same week as compared to a few days earlier.

In fact, social media has pretty much become a necessity in these past few weeks — Facebook reported a major surge in usage particularly in countries that are hit hardest by the virus. Total messaging in these regions has increased by more than 50% over the last month. Voice and video calls on Messenger and WhatsApp too have more than doubled in this time.

Zoom and Google Duo rose to the top of the free apps list on both Google Play Store and Apple App Store. Interestingly, the top 10 grossing apps (social category) on Google Play Store are all apps that let users have video chats with strangers. Now that’s one way to cope with the lack of human connection in the current world.

Whether it is PUBG, family Ludo games, or video-calling apps like Houseparty, these coping mechanisms are not really all that sustainable over extended periods of isolation. If anything, it might make one more anxious.

When The Internet Is Not Enough

It’s not just entertainment. The pandemic has caused a surge in the usage of mental self-help or counselling apps too. According to the Indian Psychiatry Society, mental illness cases in India have increased by 20% in the past few weeks.

According to the analysis of mental health chatbot Wysa, a common theme in recent user conversations on the Wysa platform include grief, loss of routine or a disconnect from the outside world and the inability to do things that give people joy because of quarantine measures.

Wysa also reported a surge in usage since the coronavirus outbreak. The nature of conversations on Wysa has also changed in these times. Earlier discussion topics such as exhaustion, depression, relationship issues, and sleep have now been replaced by health anxiety, the feelings of isolation, and both financial and social worries.

“It is clear that people are struggling with not only health but also a financial crisis without access to their normal routines, social support, and coping mechanisms,” said Jo Aggarwal, cofounder of Wysa, in a blog post.

Wysa’s lead psychologist Smriti Joshi told Inc42, “I’ve seen a feeling of escapism in a lot of my clients and also otherwise in volunteer counselling sessions. People don’t want to think about the pandemic anymore, the minute they get up in the morning they want to be so distracted.”

In the short term, these distractions work well. But what happens when we overuse these options? Anything practised in excess tends to lose its charm after a while. Where will people run to then?

Even with an ocean of options available for entertainment, psychologists claim that people have started feeling anxious from just looking at their screens. Those who fall under the sub-clinical category or ones who have been diagnosed with clinical anxiety or other issues have already started experiencing digital fatigue in this new normal.

Wysa’s Dr Joshi noted instances where patients have said that they feel fatigued from constantly trying to move to something stimulating online and not being able to have the same joy for things as before. High levels of stress in people is driving them to look for help online and they are attempting to connect with other humans online rather than just staying engaged with social media or watching movies or playing games.

“People are now looking for something more meaningful than digital entertainment. They want to look at other ways of using this time productively, they want to find better ways of managing the stress. And sadly the only help available now is online with clinics shutting down across the country.”

When Saviour Becomes The Devil

So how can individuals cope with this unprecedented stress on their mental health? According to a Russell Sage Foundation study, societies are most resilient in the times of crisis when they have high levels of faith in institutions, high social trust, high levels of patriotism, optimism, and social and racial integration. Given India’s recent countrywide citizen protests, cases of distrust and episodes of communal violence, we would score extremely low on all these factors. That’s detrimental to the overall mental wellbeing of society.

Psychologists anticipate the long-term impact on the human psyche if isolations continue and people continue to rely on the digital world in order to make sense of it all. According to Dr Narhari, once digital fatigue sets in, people will see a drop in their awareness levels. They will be just physically looking at the screen, without being able to analyse the displayed information. In other words, our ability to perceive signals online might diminish.

Extended seclusion could even result in loss of communication skills. People will lose the ability to respond emotionally and their response to even deepest grief will get limited to curt responses like one is used to seeing online.

‘Oh, Okay, Alright,’ Narhari said as an example, adding, “Because the person would have spent so much time with technology, they will start replicating mechanical responses. So we will also have very pre-programmed responses. Losing the innovative, creative, personal touches in our communication, which will make us very robotic in our outlook.”

The loss of communication skills will further isolate people from other humans and perpetuate the cycle of humans receding into their shells and blocking themselves from the world.

“You don’t know how to ask for help, because nobody has been around for a long time. And even when somebody approaches, you don’t know how to communicate your negative feelings. This could result in the rise of increase in substance abuse, mental health issues and also compromise with the person’s normal duties as a daughter, employee, or son,” said Dr Narhari.

These feelings of isolation and loneliness are only expected to grow in magnitude as the pandemic intensifies, possibly resulting in extended lockdowns. Isolation, fear, and stress have been scientifically proven to have a direct impact on the human immune system. From that perspective, social-distancing measures that are a central pillar to avoiding the spread of Covid-19 is also making us more susceptible to it, if it comes for us.