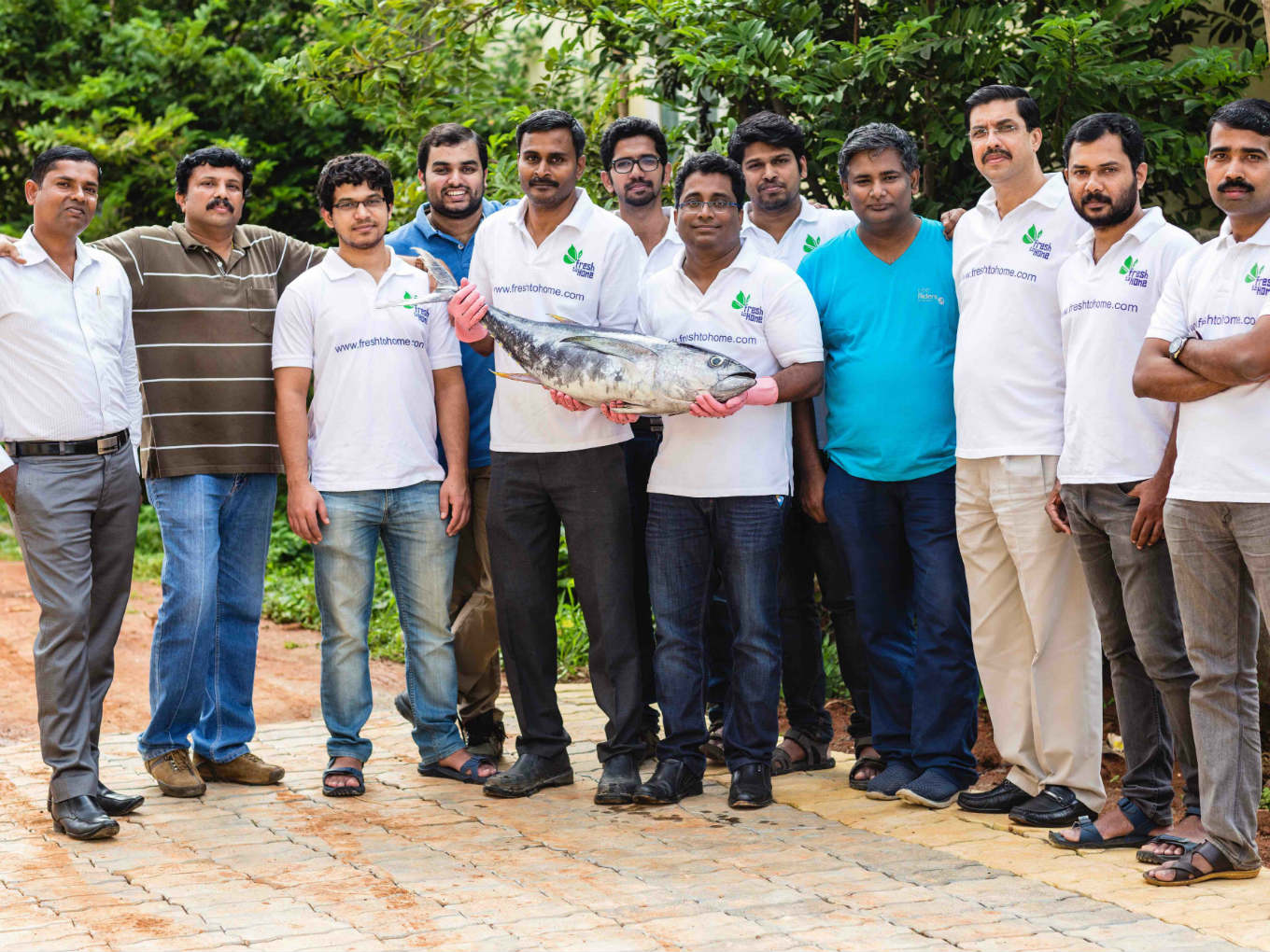 The Series A round was led by CE Ventures

FreshToHome manages the entire cold chain of fish delivery, with a majority of the trucks coming in from the southern coast of the country

India is currently the world’s largest producer of milk, the second-largest producer of fruits and vegetables and has a substantial production of marine agriculture, meat and poultry products. Overall, the cold chain market for perishable products logistics is projected to reach INR 2,618 Bn by 2024, growing at a CAGR of 14.8% during 2019-2024 in the country.

Yet, the traditional supply chain is contaminated with chemical-based storage and logistics processes. At the same time, in the huge perishable goods network, only 30% of the industry operates under an organised platform while the rest is run by unstructured small and medium scale private players. Thus, the lack of transparency between the supply chain and the demand source as well as inefficient logistics leads to more than 40% wastage in this space.

Shan Kadavil, CEO of FreshToHome, a Bengaluru-based online marketplace for perishable goods like fish, poultry, mutton, steaks, and fillet, is looking to change this. A serial entrepreneur and ex-Zynga CEO, Kadavil aims to bring artificial intelligence (AI) and internet of things (IoT) into the cold chain, food safety and sourcing processes. The idea is to make last mile delivery of perishables safe, and storage chemical-free at an affordable cost.

Founded in 2015 by Kadavil and Mathew Joseph along with a team of key people from Zynga, the company is backed by angel investors such as Rajan Anandan, Mark Pincus, David Krane, among others.

Currently operational in Bengaluru, Delhi/ NCR, Kerala, Chennai and Dubai, it now plans to expand its operations in all Tier 1 cities of India including Mumbai, Hyderabad and Pune. FreshToHome.com is also using the funding to further strengthen the sourcing supply chain by extending its patent-pending sourcing technology to fisherman and farmers across India.

Tushar Singhvi, Director, CE Ventures says, “FreshToHome is not only trying to streamline the industry, they’re also using technology to revolutionize the way the industry functions. It is a very robust model and a sustainable mission, and we are extremely proud to back Shan and his team on this journey.”

It Began With The Love For Fish

A true-blue Malayali Kadavil’s penchant for fresh fish led him to Sea To Home, a Kerala-based ecommerce platform, which would deliver fish to Bengaluru where he was working at the time. But in 2013, Sea To Home wound down operations.

Unable to find anything that could compare, Kadavil decided to track down Mathew Joseph, the founder of Sea To Home. “When I met him, I came to know the operational inefficiencies the platform was facing. In a short span, the platform has reached 4000 customers. So, I decided to angel fund him,” he recalled.

This was a turning point for Kadavil. The $50 Bn opportunity in the fragmented Indian fish market and the $30 Bn market size in poultry pushed him to build his core team and launch FreshToHome in 2015. “As we were also targeting poultry, we renamed the company,” he added.

At present, fish is the major source of revenue for the company and it has access to more than 1500 fishermen located in 125 coastal towns and cities. With a team of 1000, it operates on the hub-and-spoke model. With four factories in Kerala, Bengaluru, Noida and Chennai, it has around 20+ processing facilities and hubs in each city, where 10 tonnes of meat is delivered on a daily basis.

Fish is sourced daily from independent fishermen and is cleaned, processed and cut at the factory in keeping with industry standards. It is also tested for any traces of impurities or disease and is then delivered to the consumer’s doorstep.

Currently, it is delivering 400 tonnes of fish and meat per month and is growing at INR 12 Cr GMV per month. With 7K orders per day, it is reaching 400K customers across India.

From The Sea To The Plate

Kadavil explained that a typical supply cycle in the fish segment goes like this: fisherman→ coast agent→ auction point→ dealer→ wholesaler → city retail points. Most fish available in the market are caught by large mechanised trawlers that are in the sea anywhere ranging from three days to three months.

“There are around 5000 coasts in India and on every 10kms, you can find a fishing village who rely on the traditional fishing methods. Due to lack of predictability around how much and of what type fish a fisherman can catch on a particular day, the price is quite arbitrary. While demand is constant from the harbour, the supply is quite erratic, leading to wastage of the product,” he added.

Further, to ensure that the produce remains fresh, the standard practice is to apply chemicals such as ammonia, chlorine or formalin on the fish. Thus, by the time the produce reaches the consumer, not only is it at least 5-6 days old, but it also becomes ‘chem-fish’ in the process, which carries the risk of food poisoning, triggering allergies or other serious ailments.

“The same story is repeated in multiple different supply chains. It’s about changing the way food chain is maintained in the Indian supply ecosystem. Our focus is on creating an AI-driven perishables supply chain with the use of latest technologies,” he added.

To fill in the existing gaps, FreshToHome started working on a predictive analytics-based platform which features the company’s patent-pending commodity exchange technology.

Commodity exchange technology allows the company to eliminate numerous middlemen involved in the fish supply chain. In a simpler sense, it offered fishermen a smartphone app to select the produce they want to sell and bid to get selected. The system then selects the seller based on demand for the fish, location and other factors and places a purchase order, thus working as a virtual trading commodities exchange.

“In our initial research, we found that though most fishermen are illiterate, they knew how to use smartphones well, and they all use WhatsApp and know how to use the internet,” he added. This helped them decide on the app-based approach. The app has gamification elements to keep users engaged.

Although, they initially faced challenges from the middlemen groups, the company managed to convince them to work together to build a better supply chain. Today, FreshToHome manages the entire cold chain, with a majority of the trucks coming in from the southern coast of the country.

At every 100 Kms, FreshToHome has its own trucks, which collect the fish and take it to the nearest collection point. It is then shipped by air to the respective consumers, who have placed the order on Fresh2Home’s consumer-facing app. “On an average, each order is of minimum INR 200. A night order is usually delivered by next morning and a morning order by noon.”

FreshToHome uses a high volume reverse osmosis system to make ice which is further used to avoid the seafood from getting rotten in the process. It has also deployed a cloud-based IoT system to regulate and monitor the temperature. “This reduced the time gap between supply and delivery to 3 hours and also improved incomes of a fisherman by 20%,” Kadavil  said.

To bring in transparency between supply and demand, the company strengthened its backend with AI-focused algorithms. “We receive more than 1000 price points on a daily basis which tell us which is the cheapest best quality fish to purchase. Thus we can now purchase fish popular in Gujarat at a smaller price point in Kolkata. Also, based on number of daily orders, we can predict demand,” he added.

This also helped them reduce wastage. In traditional seafood supply chain wastage margin is about 15%, while FreshToHome claims to operate with a wastage margin of 1.8%. Kadavil said the company can predict demand and supply and know when to keep the supply chain on standby.

The Next Step: Retail, Fish Farming And Organic Vegetables

When asked about competition from the likes of  Licious, ZapperFresh and, BigBasket, Kadavil counted FreshToHome’s capital efficiency as an advantage. He added that it is is a revenue oriented company. Going forward, it is planning to convert its hubs in different cities to retail outlets to cater to those who have not yet made the switch to online shopping for groceries, meat and seafood.

Besides its retail plans, FreshToHome aims to  build a food park where it can build high-tech Farms. Started last year, the company is already farming 60 tonnes of seafood at such farms..

It’s going with two types of farms. The first one is a terra farm which  uses a cage aquaculture technique, which is said to be a low-impact practice with high returns popular in European nations. It involves breeding fishes in existing water resources in a net cage which allows free flow of water. This farming technique can produce up to 500 tonnes of fish while consuming very low energy and with minimal environmental impact.

The second farming technique being used by FreshtoHome is called nano farming, which is another version of the caged aquaculture but instead of natural water bodies, the fish are bred in large water tanks or pools. This helps the farmers reduce cost for scale and build a more powerful supply chain. But this kind of methodology has its concerns as well. Though the cage-industry has made numerous technological advances in cage construction in recent years, the risk of damage and escape due to storms is always a concern.

“In the next three years, we intend to build 10K nano farms. We started this initiative a year back and are currently farming 60 tonnes of fish per month. Also, we have identified clusters of farmable land near Bengaluru. Fish farming using aquaculture technique will be the primary activity here,” he added.

Going ahead, the company is also planning to produce chemical-free crops by utilising natural manure produced through fish farming activities and doing soil-less farming in a controlled environment.

FreshToHome’s next target for disruption is organic vegetables, which are extremely expensive in India. The company is working to make them more affordable in the months to come. Produce from its soil-less farms is already available in Bengaluru under a pilot phase, but just like in large-scale farming, scaling up operations to reach more cities depends on FreshToHome’s commitment to the vegetable sector and its ability to be patient in a tight market.