Fake News, Websites And Companies: Inside The Dark World Of Crypto Ponzi Schemes

Fake News, Websites And Companies: Inside The Dark World Of Crypto Ponzi Schemes 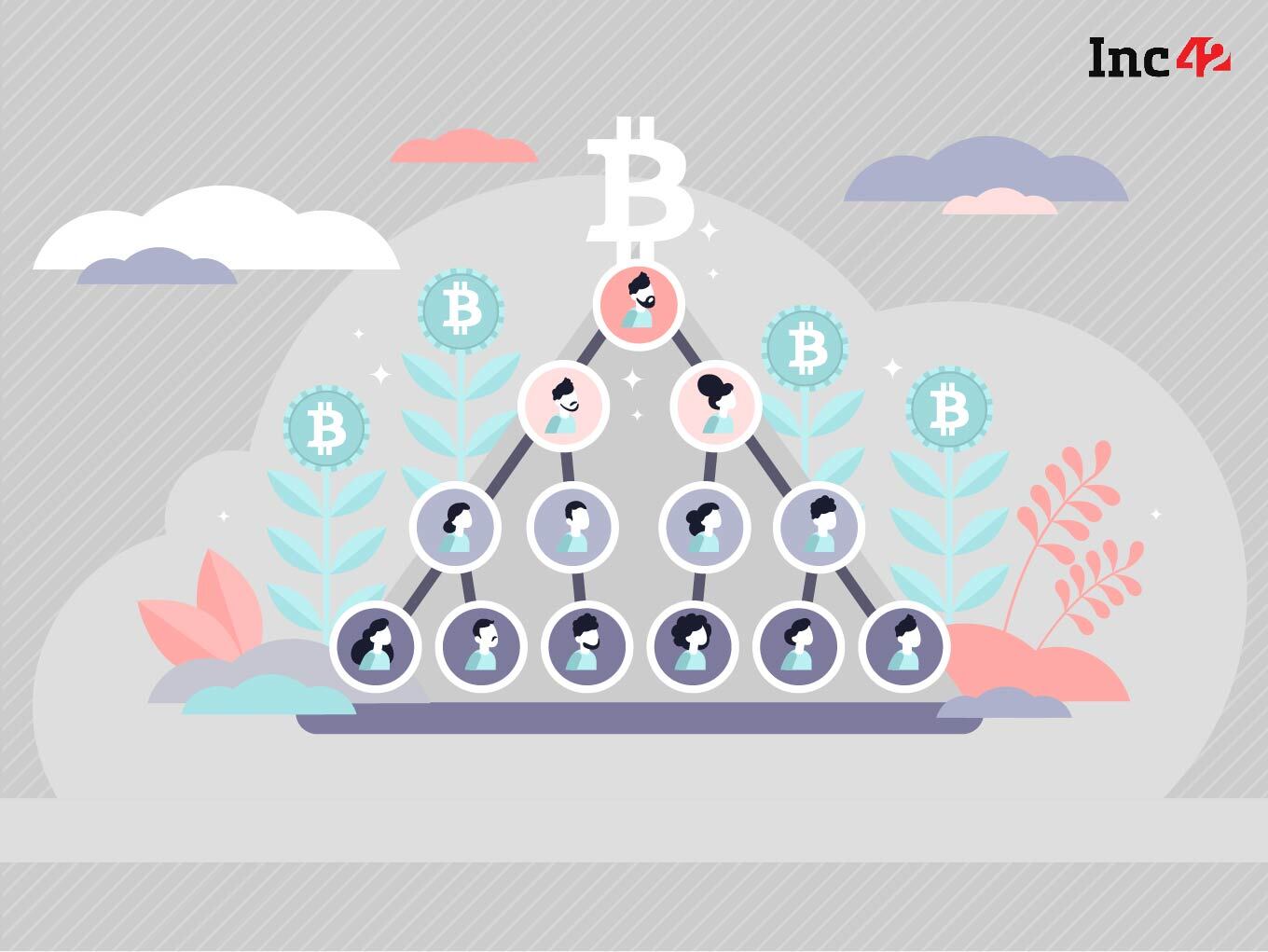 We have our own detection mechanisms to identify and offboard suspicious accounts and collaborate with law enforcement to build cases and take down criminal groups, says Binance

“Bitcoin Loophole is the single biggest opportunity I’ve seen in my entire lifetime to build a small fortune fast,” — Amitabh Bachchan (In a fake interview)

A few days ago, I was scrolling through Twitter when a tweet popped up, telling all and sundry how Bollywood icon Amitabh Bachchan recently made a fortune out of his bitcoin investments.

The feed must have surprised many. Earlier, he seemed quite keen to walk out of an ad campaign signed with India’s first crypto unicorn CoinDCX. Bachchan cited the lack of regulatory clarity regarding crypto, and the cryptocurrency exchange put on hold all promotional activities although the veteran actor was roped in as the company’s brand ambassador in September 2021.

As I clicked on the link, it featured Big B as saying, “What’s made me successful is jumping into new opportunities quickly — without any hesitation. And right now, my number one money-maker is a new cryptocurrency auto-trading program called Bitcoin Loophole. It’s the single biggest opportunity I’ve seen in my entire lifetime to build a small fortune fast. I urge everyone to check this out before the banks shut it down.”

A quick search later, I found that the same quote was earlier attributed to Bill Gates and Wipro’s Azim Premji.

Is this related to what we have uncovered in the past? We started digging it further.

In November 2021, we unearthed a crypto scam that defrauded hundreds of people across the country in the name of bitcoin or other crypto contract trading schemes.

For the uninitiated, here is a quick look at the modus operandi:

Then comes the bummer. An investor either loses the entire amount in ‘trade’ and is asked to invest more to recover the initial funds. Else, his account gets locked, and he can no longer access his money.

The outcome is predictable, and people have lost big money, ranging from $1,000 to more than $20,000. In one of the previous articles of this series, we have covered how Manish Gupta, a Delhi-based investor, lost more than $6,000 in this Ponzi scheme.

Check out the articles of this series here:

After Inc42 started investigating the matter, it has been able to establish a few points.

A Deep Global Network Runs The Racket: The racket runs localised groups, and during our probe, we were part of the groups that targeted Indian users. However, similar groups are being operated globally. So far, we have been able to trace groups targeting the locals from African nations and residents of other Asian countries, including people from Indonesia, the Maldives, the Philippines, Sri Lanka, Bangladesh and Pakistan.

Fake Companies And Their Websites Feature Fake Interviews: Most of the companies seemingly in operation have faked big names. A new user often falls into the trap by believing their credentials in the first place. And the more wary ones find it difficult to validate the entities from easily available sources. As these companies are fake, none of them provides locations or addresses.

The rapid rise of the fake culture has not raised too many eyebrows, though. In fact, the ‘unknown’ operators are frequently impersonating reputed news portals and featuring fake interviews of top-notch celebrities like Amitabh Bachchan, Bill Gates, Aziz Premji and many more.

Pretending to be reputed newspaper digital print Indian Express, some of these urls are https://www.newseport.to, https://www.primenews.to etc.

When people click this content, they land up on fishy platforms luring them to invest. Although fake sites have been busted multiple times, the content regularly pops up under different URLs. 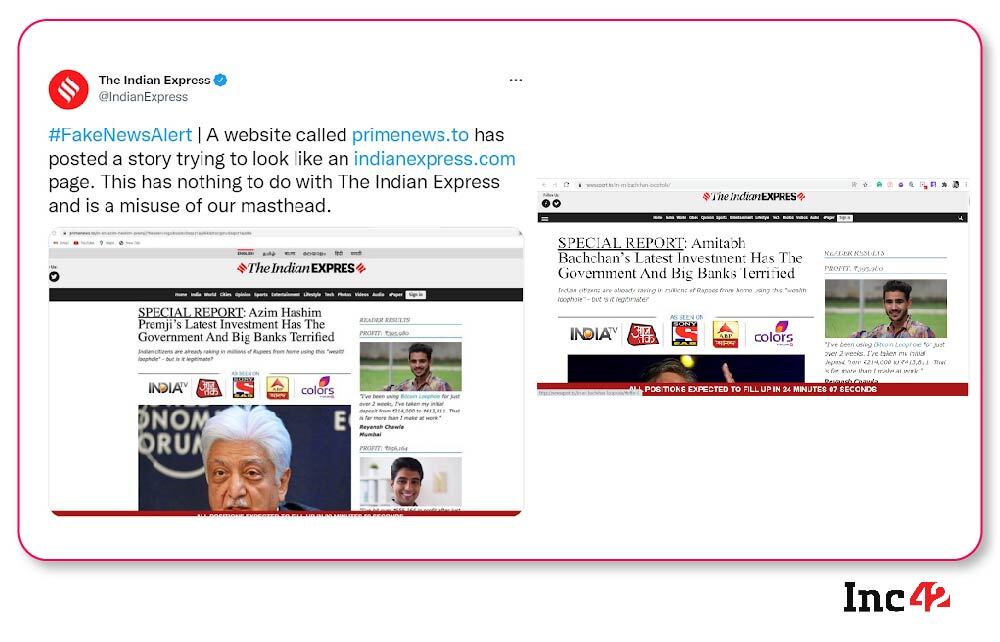 The right side of the web page features quotes of Reyansh Chawla from Mumbai, Muhammad Apte from Delhi and Bhagya Deol from Bengaluru, alleged beneficiaries of Bitcoin Loophole platform. The excerpts tell us how these users made huge profits from an AI software programme called Bitcoin Loophole.

However, a little search shows that all is not well. The IMF’s chief economist Gita Gopinath’s picture has been used as Bhagya Deol’s. Reyansh Chawla’s image is that of late Poshik Sharma’s, who was found dead in Australia in 2019. And the third one is a stock image.

Interestingly, Bitcoin Loophole has been featured by some mainstream media houses as an advertorial that details why the AI software programme is not a scam.

Why These Ponzi Schemes Often Refer To Use Binance Wallet?

“Do you have a Binance wallet?” The assistant asked a user Mukesh Kumar.

“No,” he replied. “I have a CoinDCX wallet. Will that work?”

Of course, it will. But the commissions charged on other wallets are 2x of what we charge on Binance. If you pay $10 as commission for every transaction done through Binance, you will have to pay $20 for other platforms,” the assistant said.

Another user Manish Gupta too had similar chat with his assistant Coco. 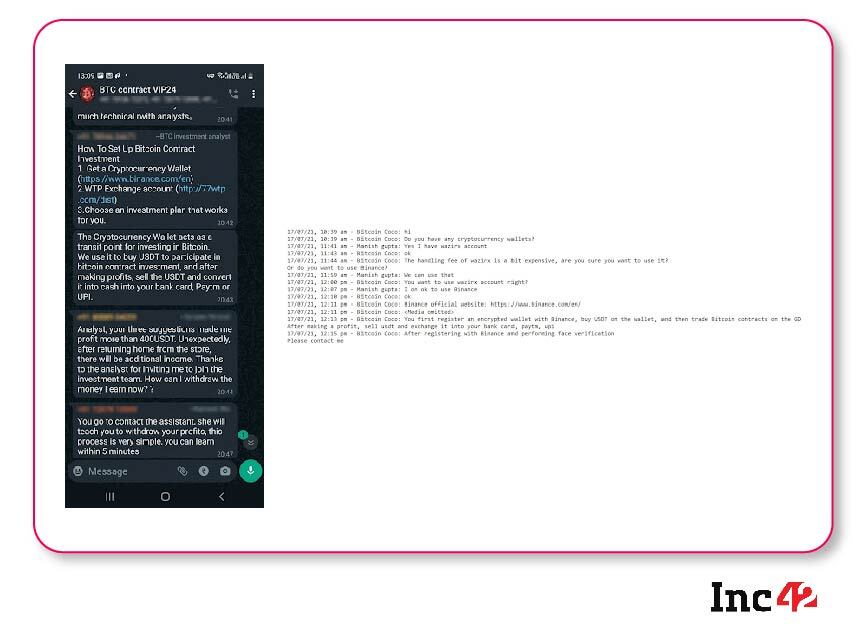 In simple terms, Binance has been a preferred choice for these Ponzi schemes operators. We have gone through more than 50 networks/groups, and everywhere, operators insisted that users should open Binance accounts. This is the platform where investors initially buy USDT or other tokens. These tokens are then transferred from Binance to other shady platforms fully controlled by the operators.

We asked Binance if it had ever investigated these unusually large transactions regularly taking place on the platform or taken steps to prevent it.

According to a Binance spokesperson, the company is dedicated to building a secure and healthy financial ecosystem. “We follow certain systems when we detect or track illicit activities. We are also trying to combat criminals with the help of an in-house system.”

This is essential as most nested exchanges are low on verification/security. Plus, their multisource trading practices and cash transaction options (in some cases) often turn them into a haven for laundering money and stolen coins. According to the spokesperson, Binance has expanded its in-house AML detection and analytics capabilities over the past year. Its compliance staff also gets in touch with customers to ensure a smooth exposure to a nested exchange.

According to the spokesperson, the company regularly audits one’s personal and business accounts, including risk scoring and fund flow analysis. “We have also implemented TRM Labs Chain Analyzer, an industry-leading security tool that identifies nested services living inside a macro exchange. As for nested services involved in illegal activities, Binance takes appropriate action such as offboarding the nested service and notifying the law enforcement,” the official added.

Asked about countrywise countermeasures, the company added, “We do not discriminate by country, but we are focussed on the regions exhibiting a high rate of abuse and historically responsible for cyberattacks, basically the Eastern Europe/Russia.”

“Binance takes necessary steps to prevent illicit trading activities. We implement our own detection mechanisms to identify and offboard suspicious accounts and collaborate with law enforcement to build cases and take down criminal groups.” — Binance Spokesperson

Will Crypto Scams Continue To Rise?

Unlike traditional Ponzi schemes, most crypto scams — Bitconnect, OneCoin and GainBitcoin, to name a few — are linked to high-end technology and global masterminds. As a result, Indian probe agencies are compelled to play catch-up instead of working proactively and reaching a quick resolution.

The outcome has been disappointing. Few have been brought to book in crypto-based Ponzi schemes, and investors are yet to recover their money. Be it Amit Bhardwaj of GainBitcoin, Akash Sancheti and others in the GainBitcoin case or Divyesh Darji of Bitconnect, everyone has managed to walk off on bail.

Will the latest case follow suit, meander through a prolonged investigation, and the long, expensive road to justice will remain elusive? As the authorities are yet to take ‘necessary action’, we will explore the crypto scam victims’ legal options in our next story.