Crypto Scam: How A Ponzi Scheme On WhatsApp Led Up To A Ransom Rage

Crypto Scam: How A Ponzi Scheme On WhatsApp Led Up To A Ransom Rage What we covered in the first article was the tip of the iceberg; the transaction size for one order could go as high as $24K, say victims

Every time a user loses, s/he has to invest double the lost amount: We have unearthed what happens deep inside these crypto Ponzi schemes

Despite repeated follow-ups by victims, the Delhi Police have not yet taken any step

“For the first month and a half, I genuinely believed in them… Until I lost $6,000,” said Delhi-based Manish Gupta.

Gupta is one of the many investors who was duped in a recent crypto scam that made inroads via innocuous-looking WhatsApp groups.

Last week, we wrote about one of the firsts of its kind, a crypto Ponzi scheme running on WhatsApp. Since then, we have spoken to multiple victims who lost thousands of dollars in the scam.

In the second article of this series, we will pick things up from where we left off and deep-dive into the modus operandi of these shady operators. And this time, we will reveal how a straightforward investment plan suddenly culminated in an alleged demand for ransom as analysts on those crypto investment groups asked for $10-30K, 5-10x the initial investments, to unfreeze the users’ existing investments.

Gupta was first added to a WhatsApp group in July this year, where several (so-called) users hailed the analyst for 100% accuracy on investment advice. After observing the group’s activities for a few weeks, Gupta decided to give it a try with a small investment.

To begin with, he was asked to open a Binance wallet first. Although he had a WazirX wallet, the analyst asked him to use Binance.

Without thinking much, Gupta opened a Binance wallet and bought 250 USDT. He was then asked to transfer the entire amount to the GD platform (https://giwifi.net/dist), which he did.

Whenever he lost his money, he was advised to invest double the previous sum. “Suppose I invested $20 and lost, I had to pay $40 for the next investment. If I lose that too, I will be asked to make it $80 and so on.”

The transactions were usually made for 60 sec, 180 sec, 300 sec and 500 sec countdowns, post which the analyst declared wins and losses.

It was July 20, 2021, when Gupta made his first bet. Within a few days, he started making profits barring a few losses. He was enjoying the whole thing.

But he soon landed in losses and realised that he had lost the entire $200 he had invested. And the assistant knew by then that he was ready to go deep.

On August 5, 2021, Gupta told the assistant that he had lost more than what he had gained so far. This time, the assistant advised him to upgrade his investment plans. Coco said he was a junior analyst, and Gupta needed a senior analyst’s help for accuracy in his profit plans.

“Mr Mark (a senior/mid-senior analyst, according to Coco) will recruit five partners with funds of up to 50,000 USDT to set up a special training class. It will be one-to-one guidance on BTC contract transactions for two weeks, with a promised income of more than three times and the partner’s promise to pay 30% of the co-operation commission out of the profit. The quota is limited,” the assistant said.

The investment talks with Mark were one-to-one, outside group chats, said Gupta. Later on, after lengthy discussions with the assistant Coco, both settled for an initial investment of $5,000. In spite of incurring losses amounting to more than $2,000, Gupta invested more and maintained a balance of 5,000 USDT to be able to seek advice from Mark.

With Mark in the picture, Gupta was able to make some initial profits. He then decided to withdraw $1,500 from the GD platform while maintaining a balance of $5,000. Unlike many other users who were not able to withdraw their investments, Gupta succeeded.

However, the withdrawal riled both Mark and the assistant called Coco. They temporarily froze his account and asked Gupta to submit the commission immediately. The commission charged was 30% of the profit.

Gupta transferred the commission worth $500 and had to assure them that no future withdrawal would be made without their permission. After long discussions, his account was back to normal.

This time, Mark asked to invest 30,000 USDT in order to retrieve the lost amount. 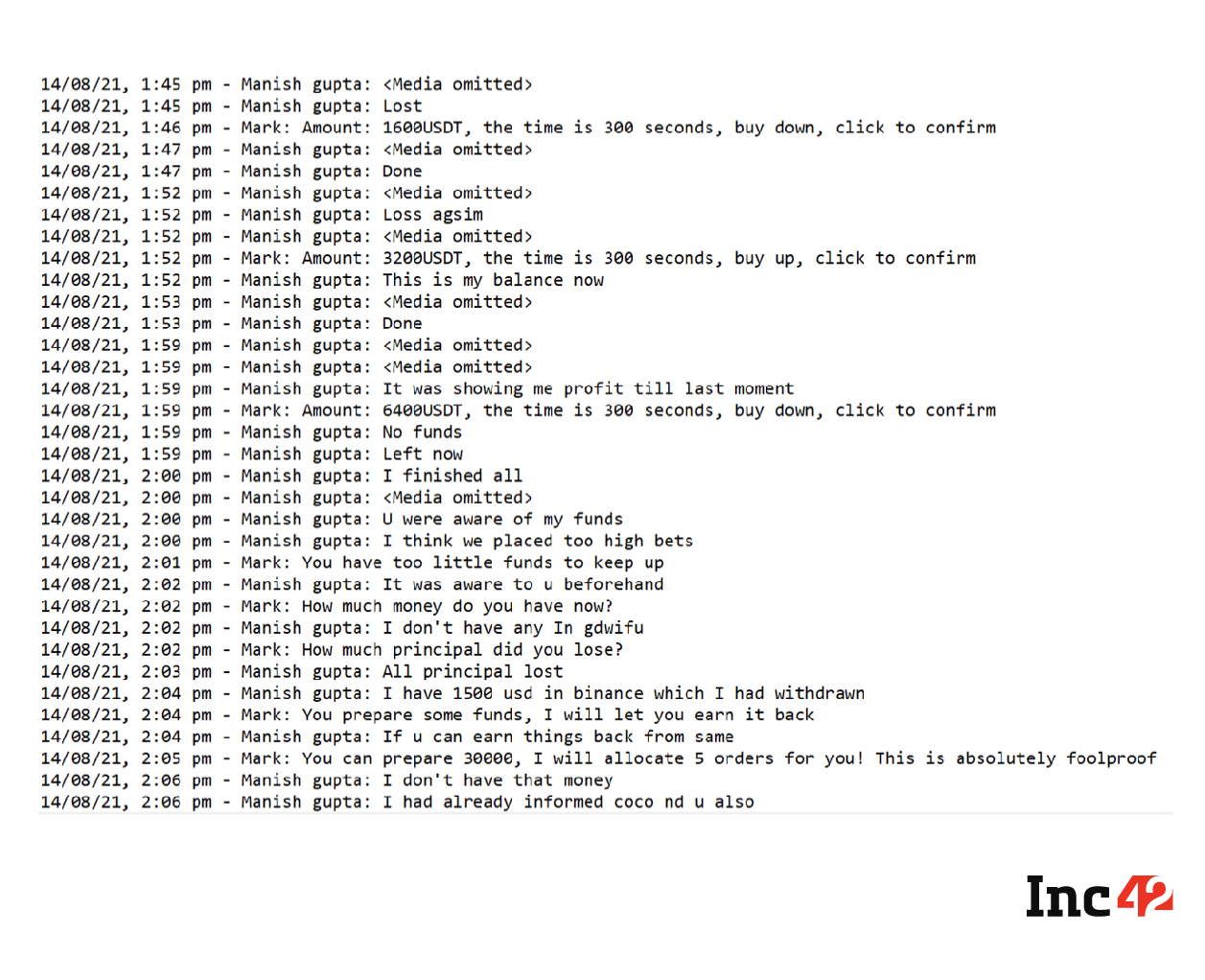 Keen to get his money back, Gupta transferred 1,330 USDT from his Binance wallet to the GD platform. But this time, the account was freezed. He was no longer able to invest or withdraw the money.

“In this way, I cannot help you earn it back. If the funds are too small, it will waste a lot of my time! If you add more funds, contact me again, and I will make a profit for you in two days,” said Mark, asking Gupta to invest more in the GD platform.

But Gupta was blocked by Mark on WhatsApp, and very soon, he was removed from all other groups.

By then, Gupta felt it was a Ponzi scheme.

The order size could go as high as $24K, said another victim still trying to recover his investments.

The GD Platform: Manipulative With No User Control

“I thought the GD account was fully safe and was controlled by me and me only. But it was not. I had to seek their permission for any withdrawal,” said Gupta.

“They could freeze my account any time,” was a lesson that Gupta learnt much later.

He also alleged that the countdown timer used by the GD platform and the likes is manipulative. “The counter showed I was winning until the end. But in the end, it showed that I had lost,” he said. 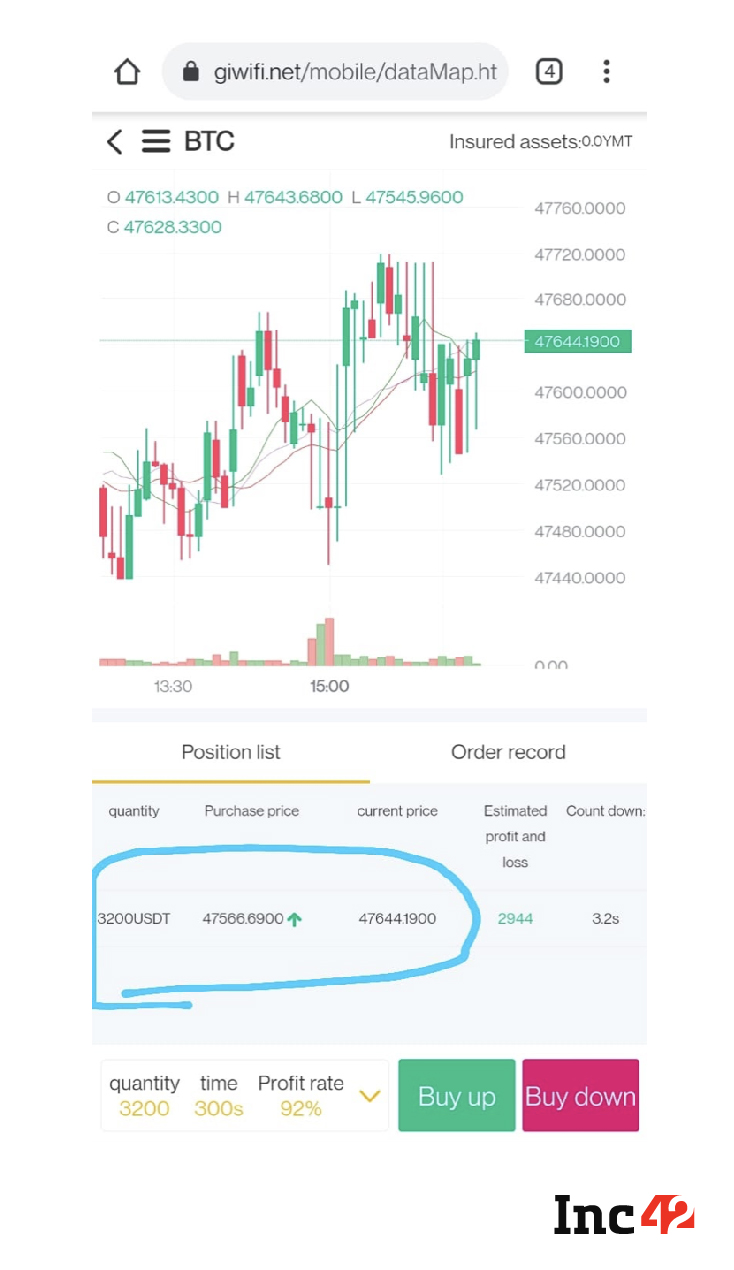 Legal Course Correction In The Doldrums

Unlike many others who could not take legal action against those people due to a lack of clarity, Gupta decided to do it.

After a failed online complaint on the cybercrime portal of the Delhi Police, he filed a complaint at his local police station at Madhu Vihar. However, the police never lodged an FIR based on his complaint, and it started bothering Gupta. In the past two months, he made several visits to the ACP office, the DCP office and the local police station. Besides, he had repeatedly sent emails to these officials.

Showing the emails to us, Gupta pointed out that nothing has been done so far. 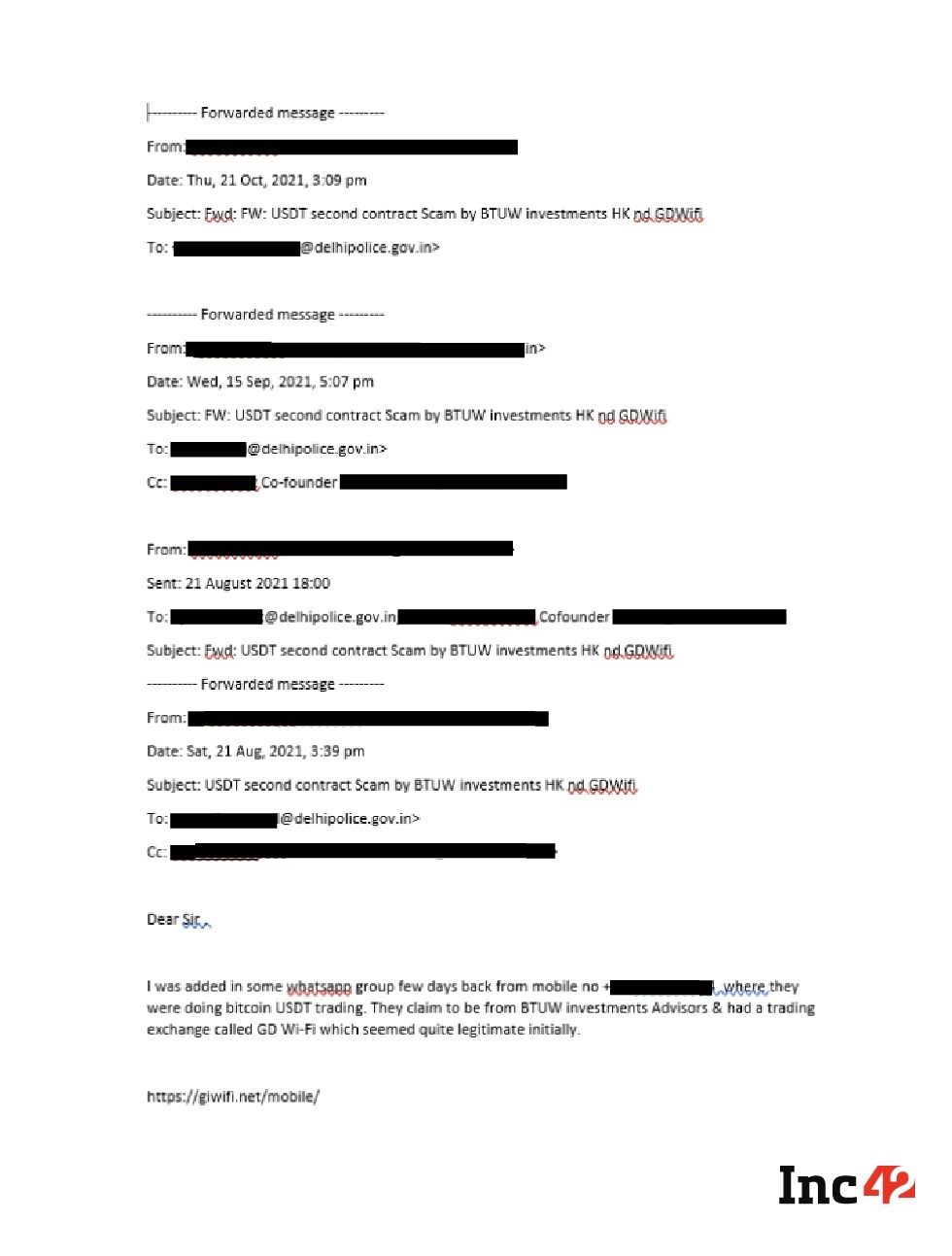 He also emailed the Hong Kong Police, but the outcome was different. “Surprisingly, they did respond and asked for all the details, unlike the Delhi Police.”

Inc42 has also reached out to multiple police officials in this regard. We will update as and when they revert.

So far, we have spoken to as many as six victims who collectively lost around $20,000. But unlike Gupta, many are not willing to go on record and recount their experience. In fact, they are still trying to recover their money from those ‘fraudsters’ as their accounts have also been frozen.

All of them have been told to increase their existing investments by 2x-10x if they want to recover their money. And they fear speaking out as they may lose their money locked in the GD or other similar platforms.

It is a classic case of a Ponzi scheme with a hacker-style demand for ransom to enable fund recovery.

This also gives rise to multiple questions. Of course, the lack of regulatory clarity is the primary concern in these cases. But the lack of awareness among users and the slow response from police departments are other key reasons these Ponzi schemes thrive in India.

“When I went to complain to the Delhi Police, one of their officers kept telling me that it’s my fault and that there is no scam,” one of the victims told Inc42.

The onus is also on WhatsApp that has not been able to curb or control such activities. Interestingly, these scams are not limited to WhatsApp. A user told us there are similar groups on Telegram as well. However, Indians are still not too active on Telegram, and hence, most of these Telegram groups are still focusing on other countries like Indonesia and the Philippines.

The Indian government has decided to introduce the Crypto Bill during the ongoing Winter Session of Parliament. But the big question is: How will the government and investigating agencies provide justice to the crypto victims?