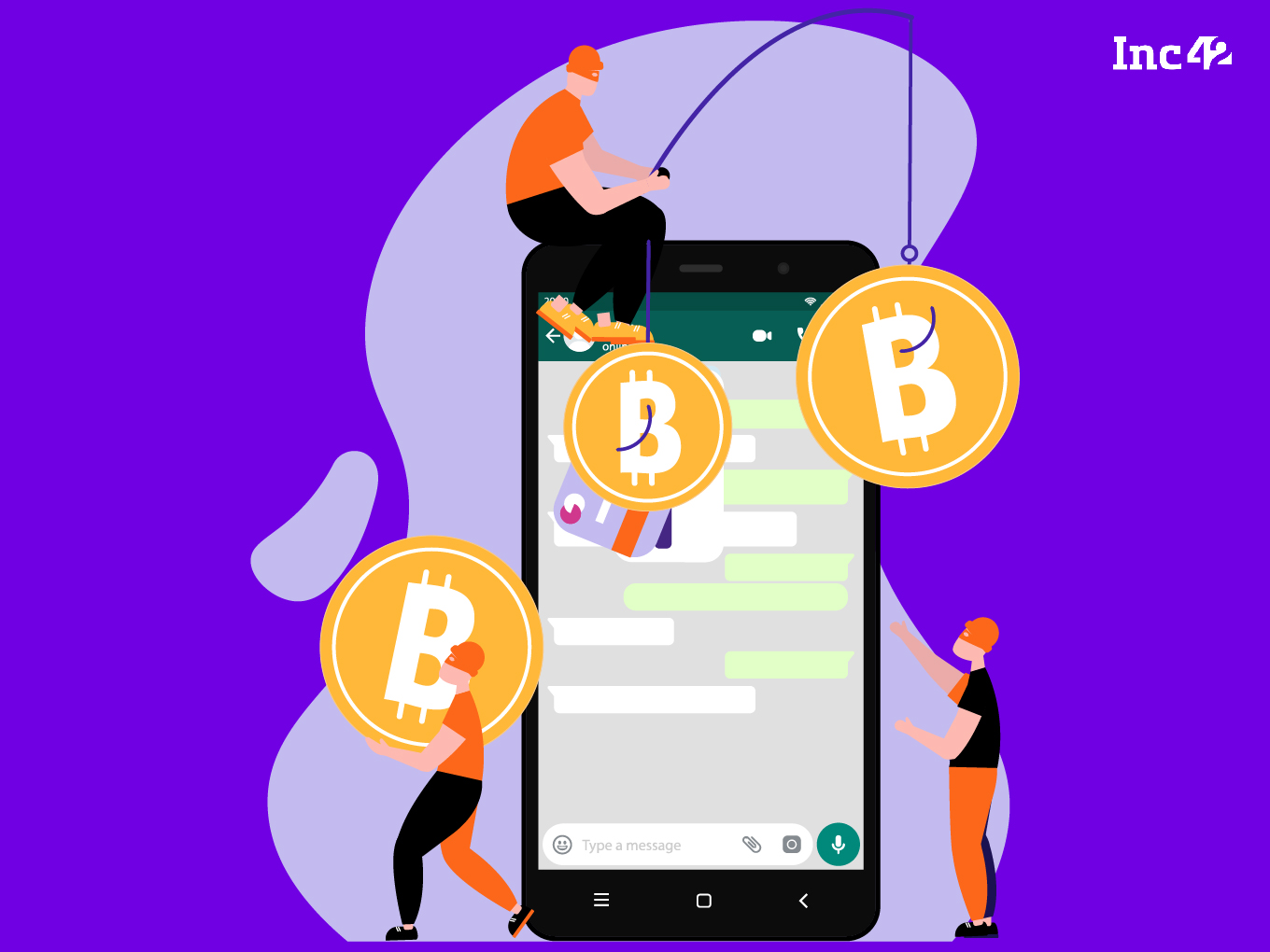 In the past four months, unidentified people have set up hundreds of WhatsApp groups and promised big returns on each crypto-investment

All these groups, with names like BTC Fortune VIP, BTC Get Rich VIP, BTC Contract VIP and so on, have the same modus operandi and conduct their business with scanty company details and zero legal contracts

In some of these groups tracked by Inc42, crypto investments worth $400-$500 happen every day

Terabytes have been written about the modus operandi of major crypto scams involving Bitconnect, GainBitcoin, OneCoin and others. And the latest in this space seems to be the WhatsApp scams with zero checks and balances. India has literally become a hotbed of crypto frauds thriving on the messenger app, given the spurt in the number of users which the country has added in the past 18 months and their questionable activities.

In China, a similar modus operandi was popular in 2018 and 2019 when many ‘crypto’ entities migrated to WeChat to escape probe agencies. In India, starting from August 2021 (it’s the earliest WhatsApp group with suspicious activities that Inc42 can trace), hundreds of WhatsApp groups have been set up by pseudonyms who act like BTC (Bitcoin) investment analysts and lure people by guaranteeing 95-100% returns.

As various members of Inc42 have been added to at least 30+ such groups, we think it is high time to dive deep and find out what these WhatsApp groups are up to.

Inside The Dark World That Promises Gold

It all started in August this year. I was added to three WhatsApp groups called BTC Fortune VIP16_001, BTC Get Rich VIP10_001 and BTC Get Rich VIP10. Quite a few of my colleagues were also added to similar groups, but the end numbers varied. There was no initial conversation as to why I was added to a group of unknown people or who were running those groups. No permission was sought, either. 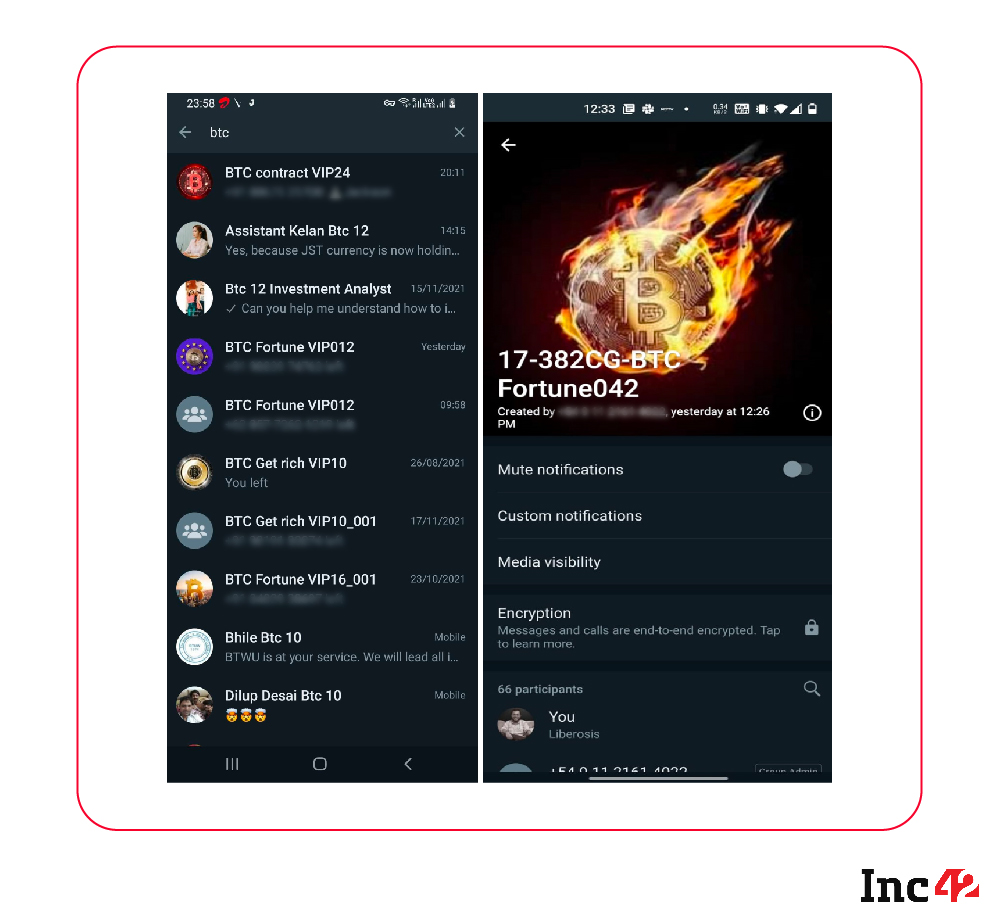 After speaking to my networks and colleagues, I realised that nearly 60% of them were part of such groups, and a few were added to more than three groups, each with a minimum of 100 members.

All these groups have similar names like BTC Get Rich VIPXX, BTC Fortune VIPXX, BTC Contract VIP and so on, XX being the number that changed every time. And most of these groups are uncannily similar.

“The trading of bitcoin contracts is the fastest growing product for wealth. From rags to riches, join us and you will make it happen” — the rant went on and on. 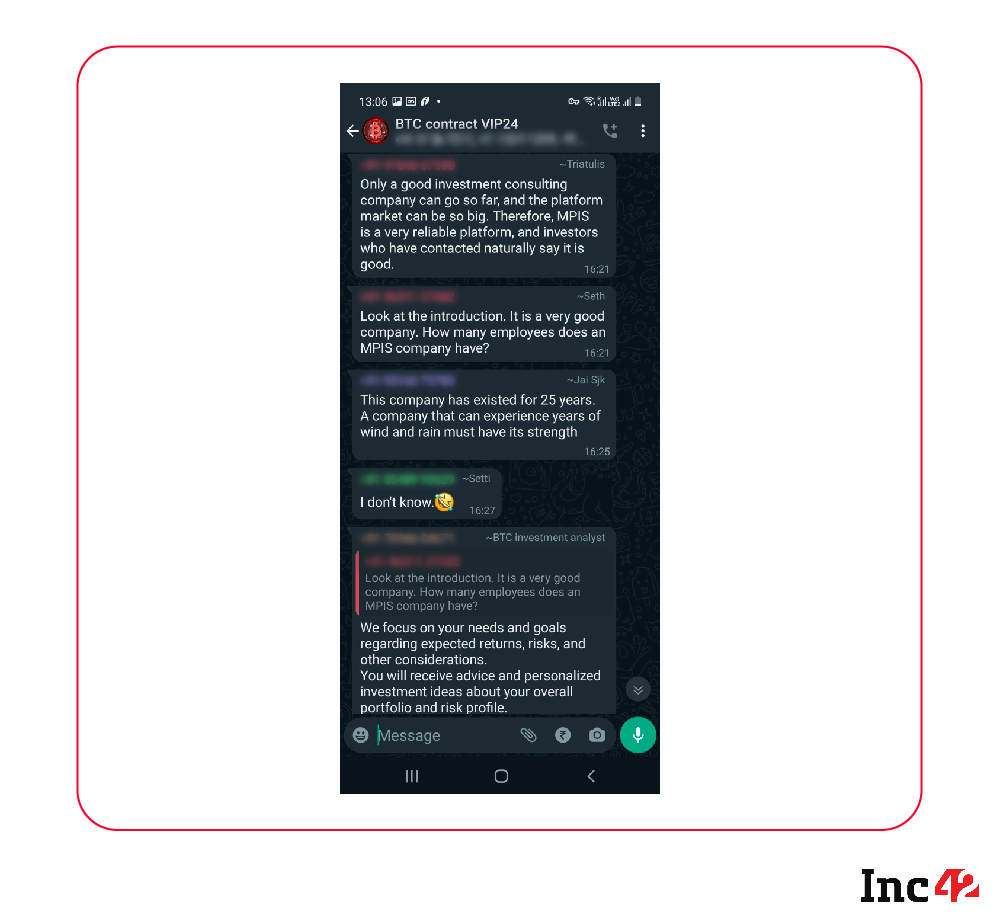 Although 95% of the cell numbers displayed on these WhatsApp groups are from India, some of them, including a few numbers belonging to group admins, are from Hong Kong, Indonesia, the UK and African countries. (Does Africa ring a bell?) Interestingly, almost all the help numbers listed by the so-called BTC investment analysts are Hong Kong numbers only.

The Anatomy Of A Crypto Scam Designed To Outsmart You

On the face of it, it is as simple as ABC. After creating a group and adding hundreds of numbers, a person acting as a BTC investment analyst starts with a welcome note and then cuts to the chase.

“Here, I will guide you on how to get more money. Here is the bitcoin trading group of BTUW Investment Consultants Ltd. In the next two days, I will share with you how to increase your wealth through bitcoin, let your wealth grow rapidly, and realize your wealth career. Whether you are a novice or a veteran, you can carefully observe the group information. Because this can really bring you profits.”

Soon after, a small group of four-five people will start discussing BTC 101 (basic information like what it is and how to make money) and within a few minutes, start acting like cheerleaders.

After a short span, the ‘analyst’ comes to the point and details how to set up bitcoin contract investment.

Here is a quick look at the step-by-step procedure:

In most of these scammer groups, the links of the exchanges shared with members include GD-Global, aka BTUW, WTP and Coin Global for bitcoin contract investments.

Interestingly, all these groups on WhatsApp ask people to create or promote Binance wallets only. After most of the investment suggestions by an ‘analyst’, the cheerleaders come forward to confirm 100% benefits. 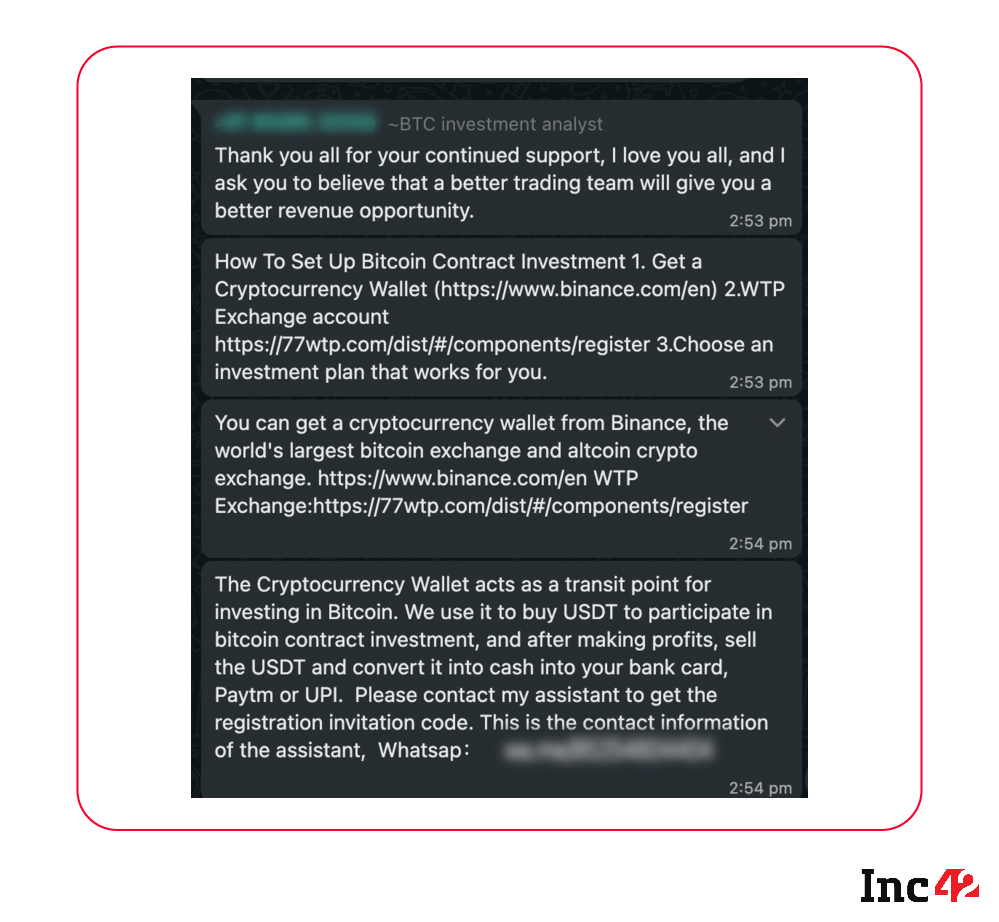 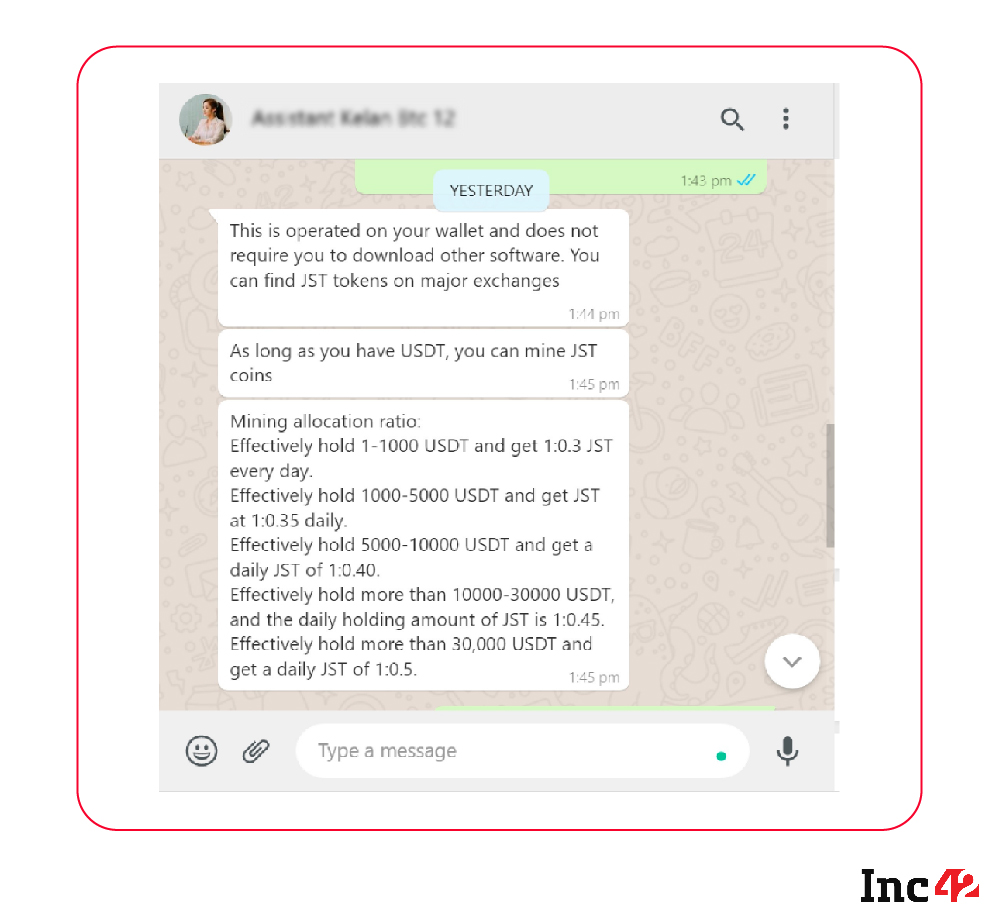 Kelan, the group’s assistant, later told the user to download a token pocket wallet and deposit up to 30K USDT (a stablecoin equivalent to $1) to gain mining rewards.

On a daily basis, most of these groups see $400-800 worth of transactions from three-four orders. 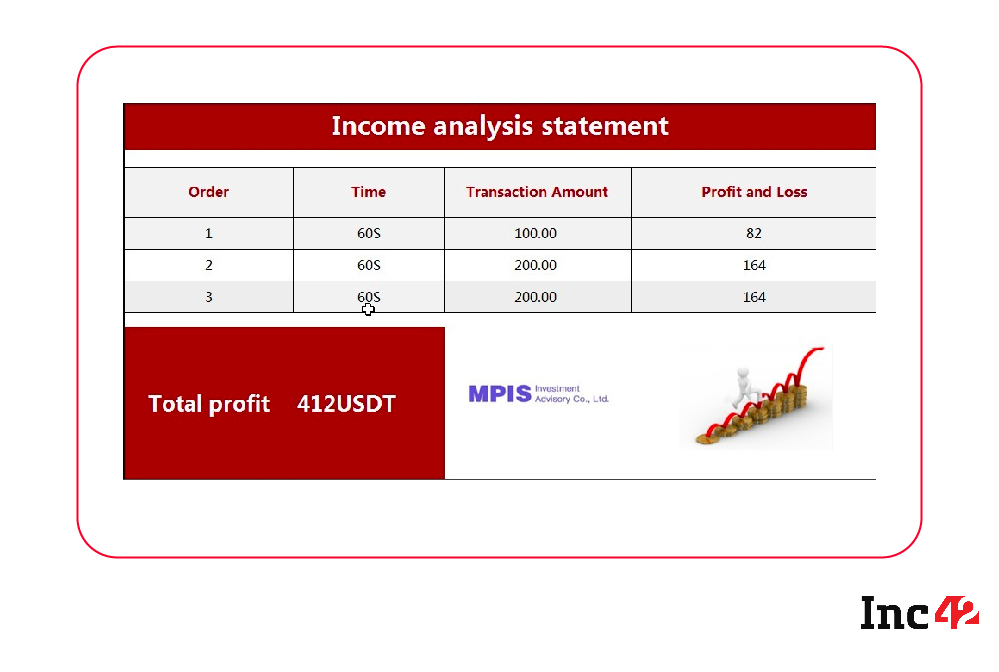 To understand the big picture, let us assume that at least 100 such groups have been active for the last four months, average daily transactions amount to $500. This means a monthly total of $500x30x100, or $15 Mn, raised by all active groups. However, the amount could be much bigger as we have kept the daily transaction value at $500.

Also, these transactions rarely come under the income tax or the ED scanner.

What’s So Worrying About These Crypto Investment Schemes

People don’t use their names or other details: Almost all these groups use similar language and group members carefully mask their names and other details so that no one can google them. And acting investment analysts are always careful not to respond to calls to avoid direct communications with legit investors.

Company details are missing: The company names mentioned in these groups have scanty or no details, and no one can verify them independently. For instance, in the groups called BTC Contract VIP 24 and BTC Contract 73, the analysts claim that they are from the UK, Singapore, South Korea and Hong Kong and work for MPIS Investment Co. Ltd. But once again, they are careful not to provide website details and verifications are not possible. They do not even share the social media pages of their respective companies.

The curious case of missing compliance: Interestingly, there is no provision for KYC/eKYC and no legal/legally valid contracts are signed between the concerned parties prior to investments so that Indian agencies may scrutinise the same as and when it is required. This grossly violates the law of the land and raises questions about operational procedures. In all these groups, analysts seem to represent foreign companies such as the UK- or Hong Kong-based companies and ask people to invest on platforms that are not India-based or have no presence here.

Consent is missing: Most importantly, many users told Inc42 that they had been added to these groups without their consent. The big question here is how unrelated people/groups can access others’ mobile numbers on such a massive scale.

One of the users who raised several questions during group interactions said on a social question and answer platform Quora that he was barred by the group admin from posting comments. The person was later removed from the group. In other cases, entire groups are slowly killed/deactivated. Then these analysts open yet another WhatsApp group but are careful not to select the users who post too many troubling questions. 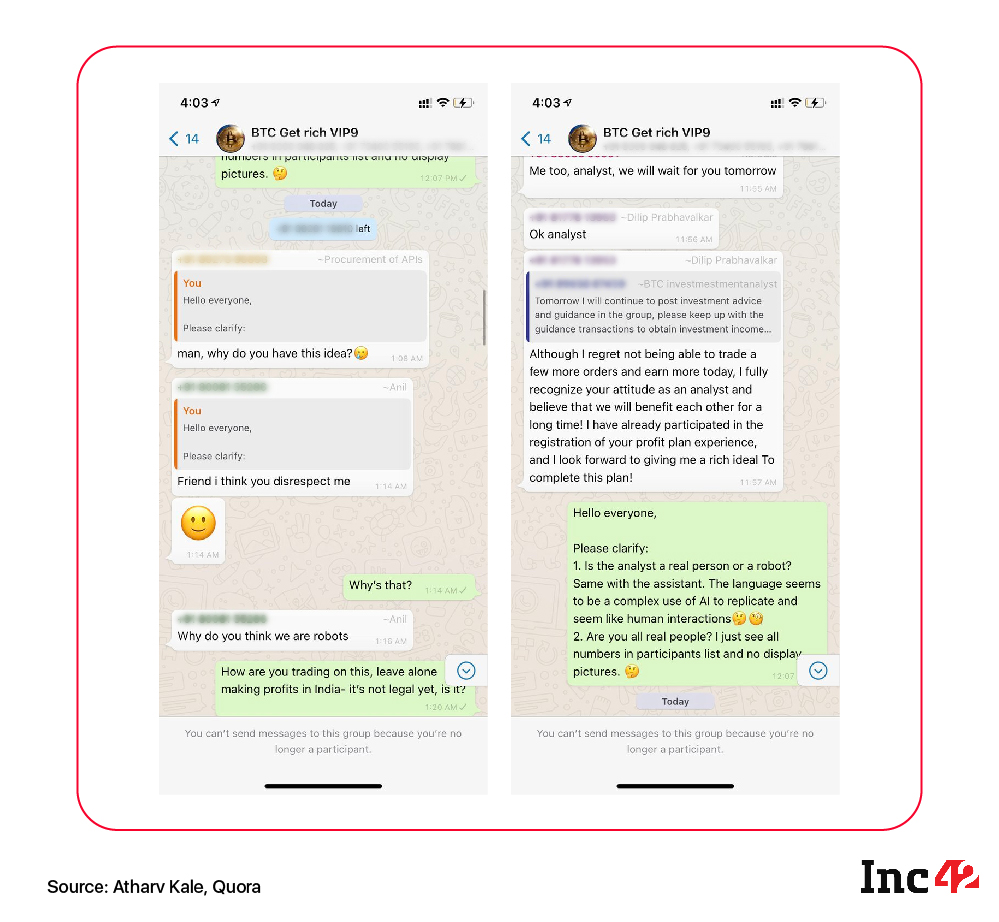 Are we interacting with bots: Identical language and response patterns across these groups make people wonder whether these are mostly bots controlled by a few humans. Most of the groups’ assistants are females (going by their names). But I was also part of a group called BTC Contracts VIP 24, where the assistant was a male. For some reason, the analyst kept referring to the assistant as ‘she’ and ‘her’, raising doubts whether they were both bots or the only humans running multiple WhatsApp groups.

Will These Crypto Scams Impact The Currency’s Future In India?

Fast-flourishing crypto scams are one of the key reasons the Indian government and the Reserve Bank of India keep issuing numerous notifications regarding crypto investments. It also delayed the draft crypto regulatory Bill.

“Take cryptocurrency or bitcoin, for example. It is important that all democratic nations work together on this and ensure it does not end up in the wrong hands, which can spoil our youths,” he said.

While the government has yet to set clear rules on cryptocurrencies, the overall lack of knowledge regarding crypto markets and investments has been dicey for retail investors who have embraced this new asset class solely for high returns in record time. So, it is essential to ensure that all safeguards are in place to keep one’s money safe. People need to check whether these platforms have their offices in India, abide by the country’s rules and regulations and maintain transparency.

Of course, just like any other asset class, investing in crypto involves market risks, but getting scammed primarily happens due to lack of knowledge and caution.

Think of the GainBitcoin scam that thrived unbridled during 2015-2018 and managed to lure more than 8,000 people as it promised fast money. After the racket was busted, people from all over India and even from the US started filing complaints against the platform’s founder Amit Bhardwaj and his associates/agents. Bhardwaj was arrested in 2018 (currently out on bail), but investors have not been able to recover their money yet.

Divyesh Darji, the main accused of the Bitconnect racket, also took advantage of this awareness gap, and many people invested there without taking a good hard look at the platform. The size of these scams is said to vary between $8.5 Bn and $20 Bn.

Even when bitcoin was priced at $5K in 2018, down from $20K in November 2017, these alleged fraudsters could cheat more than 10K people. Now that bitcoin has hit a record high above $69K, the number of Indian investors has exceeded 15 Mn and investments through major cryptocurrency exchanges hover around INR 6 Lakh Cr, scammers will be working overtime to dupe people.

Even in the absence of crypto regulation in India, the country’s probe agencies should note what’s happening in certain WhatsApp groups. Until then, caution must be the watchword if you want to leverage these digital assets.