Ecommerce has produced the most of India’s 100 unicorns with 23, followed by fintech with 21 unicorns and enterprisetech with 19 unicorns

India recently crossed the milestone of minting 100 unicorns, becoming only the third country in the world to do so after the US and China.

India’s journey to 100 unicorns started in 2011 with the first unicorn, InMobi.

Come 2021, and the funding amount reached $42 Bn, startup launches crossed 1,500 and most importantly, unicorns minted in a calendar year hit an unprecedented 44.

While 2022 has seen a slowdown in startup funding, 14 Indian startups have already crossed unicorn valuation this year, taking the number to 100 in a decade.

Days ago, we looked at how India’s unicorns measure up against the world. This time around, we are looking at what Indian unicorns do, which sectors are dominant among the unicorns ecosystem and what are the undercurrents within the larger ecosystem.

Sectors With The Most Unicorns

In all, there are 23 ecommerce unicorns, the most from any segment. These include the likes of Flipkart and Nykaa.

D2C or the direct-to-consumer model has emerged as a major ecommerce subsegment and it has been gaining momentum across the country. The D2C market is estimated to reach $200 Bn by 2026, which represents around 60% of the total ecommerce opportunity.

Therefore, it seems natural that ecommerce has minted the most unicorns, out of the more than 4,658 startups that play in the segment. 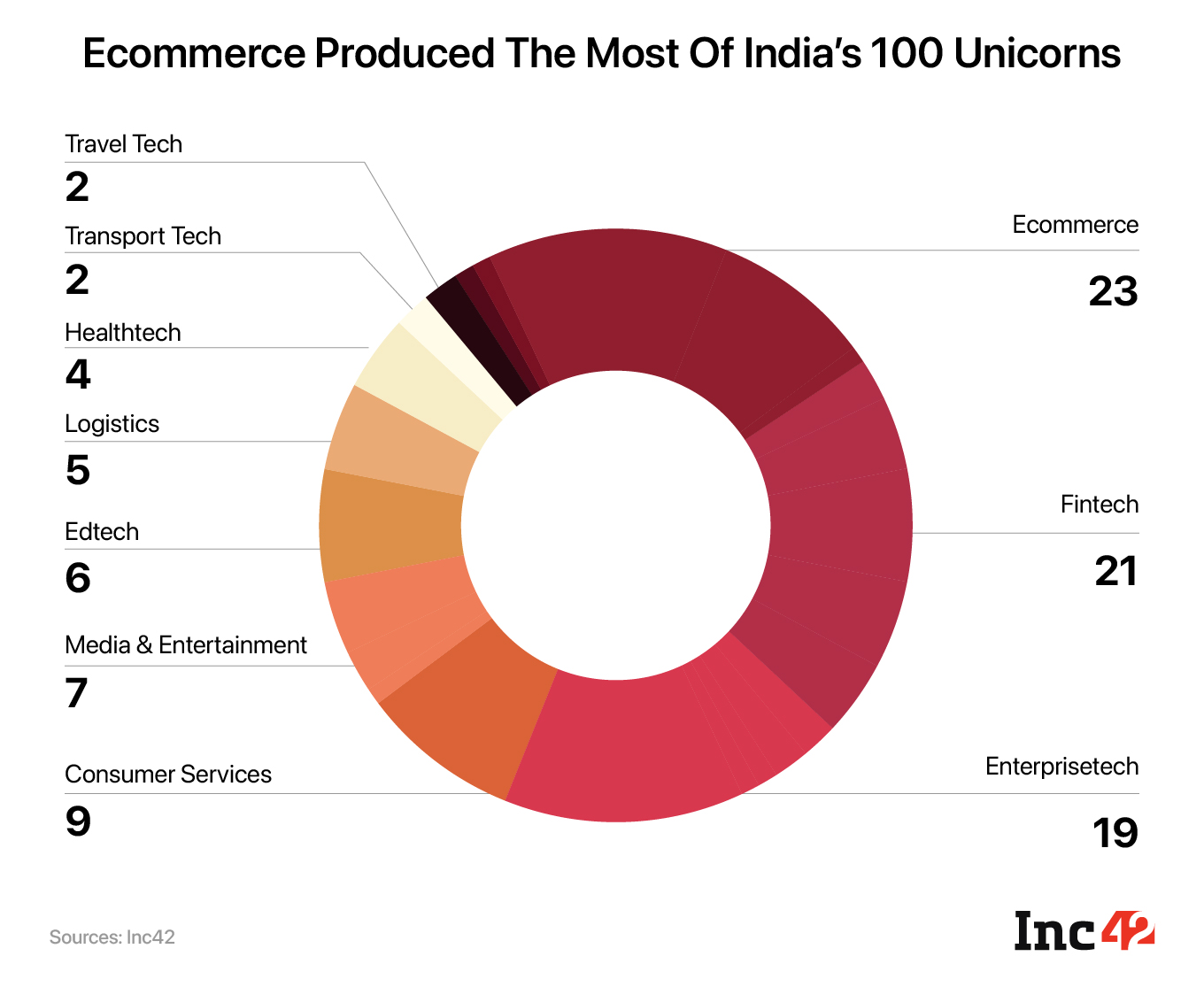 Fintech follows ecommerce closely, with 21 of India’s unicorns solving problems in fintech SaaS, payments, investments, lending and cryptocurrency, among others. Some of the fintech unicorns in India include the likes of Paytm, BharatPe and PhonePe, among others.

Enterprisetech, which includes subsectors such as SaaS, HR Tech and enterprise solutions, among others, has produced 19 unicorns so far. These include two of India’s earliest unicorns, InMobi and Mu Sigma, along with listed unicorns such as Freshworks and MapmyIndia.

The Most Valuable Sectors

Ecommerce unicorns are the most valuable among India’s unicorns, with a total valuation of around $85 Bn across 23 unicorns, giving the sector an average unicorn valuation of $3.69 Bn. 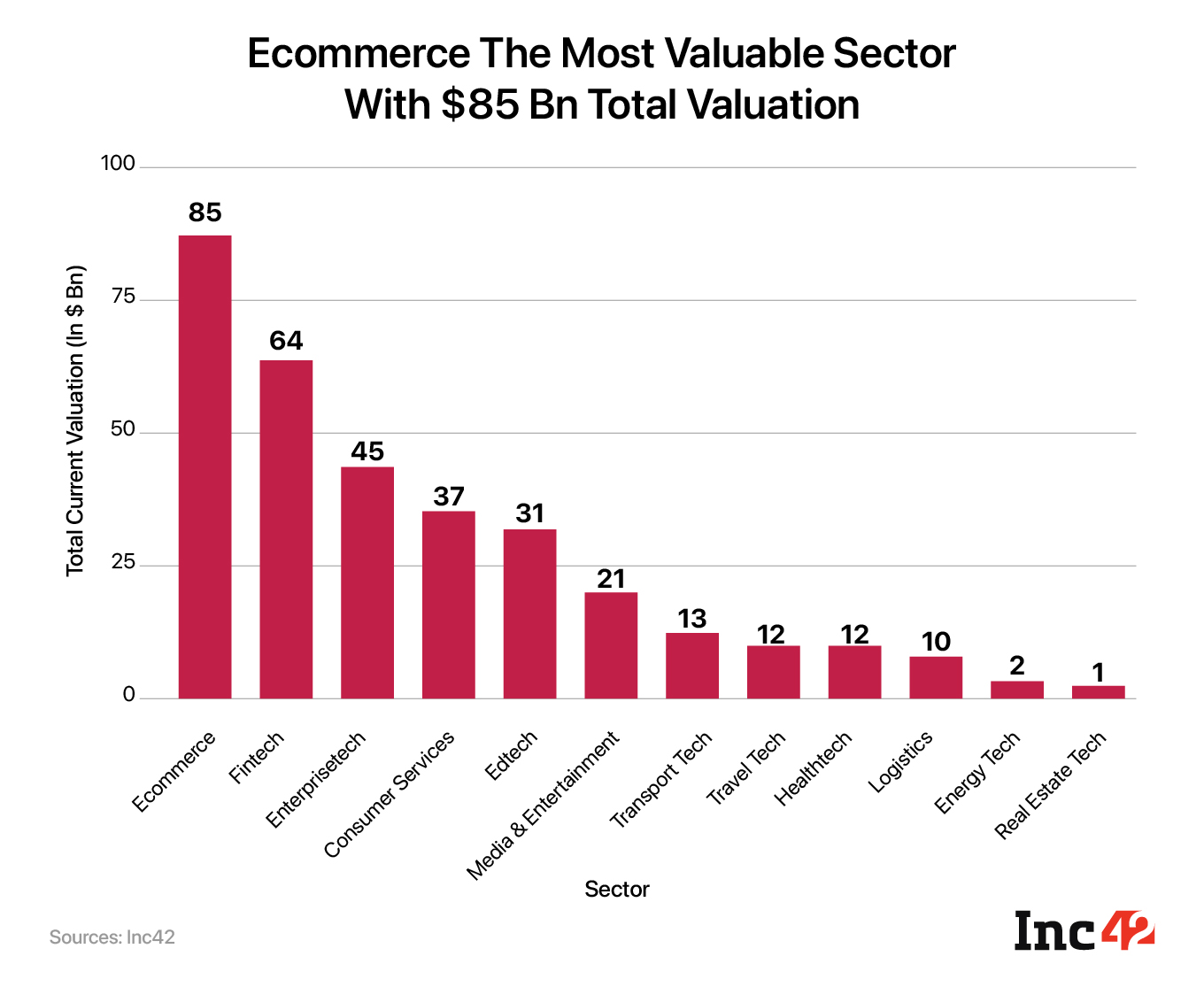 Incidentally, Flipkart alone accounts for almost half of the total valuation of the segment with a $37.6 Bn valuation. Nykaa comes in second, with its current market cap at around $8.9 Bn, way off its peak valuation of $14 Bn.

Fintech is the second on the list, with a valuation of $63.95 Bn among its 21 unicorns. Among the fintech unicorns, Paytm used to be the highest valued startup; it hit its peak valuation of $16 Bn during its IPO. However, that did not last long and its present market cap is at $4.73 Bn, according to Google Finance.

Currently, the most valued fintech unicorn is the payments gateway provider Razorpay, with its valuation at $7.5 Bn.

Enterprisetech unicorns complete the top three with a total valuation of $45 Bn across 19 unicorns. The most valued enterprisetech Indian unicorn used to be the NASDAQ-listed HRTech startup Freshworks, with its peak valuation of $12 Bn shortly before its IPO.

In a similar case as Paytm, Freshworks took one to the jaw and is now trading at a market cap of $4.49 Bn, according to Google Finance. Currently, the highest valued unicorn in the segment is the SaaS API development startup Postman with $5.6 Bn in valuation.

Ecommerce makes it a three in three with total funding raised as unicorns in the segment have raised $26 Bn in funding to date. 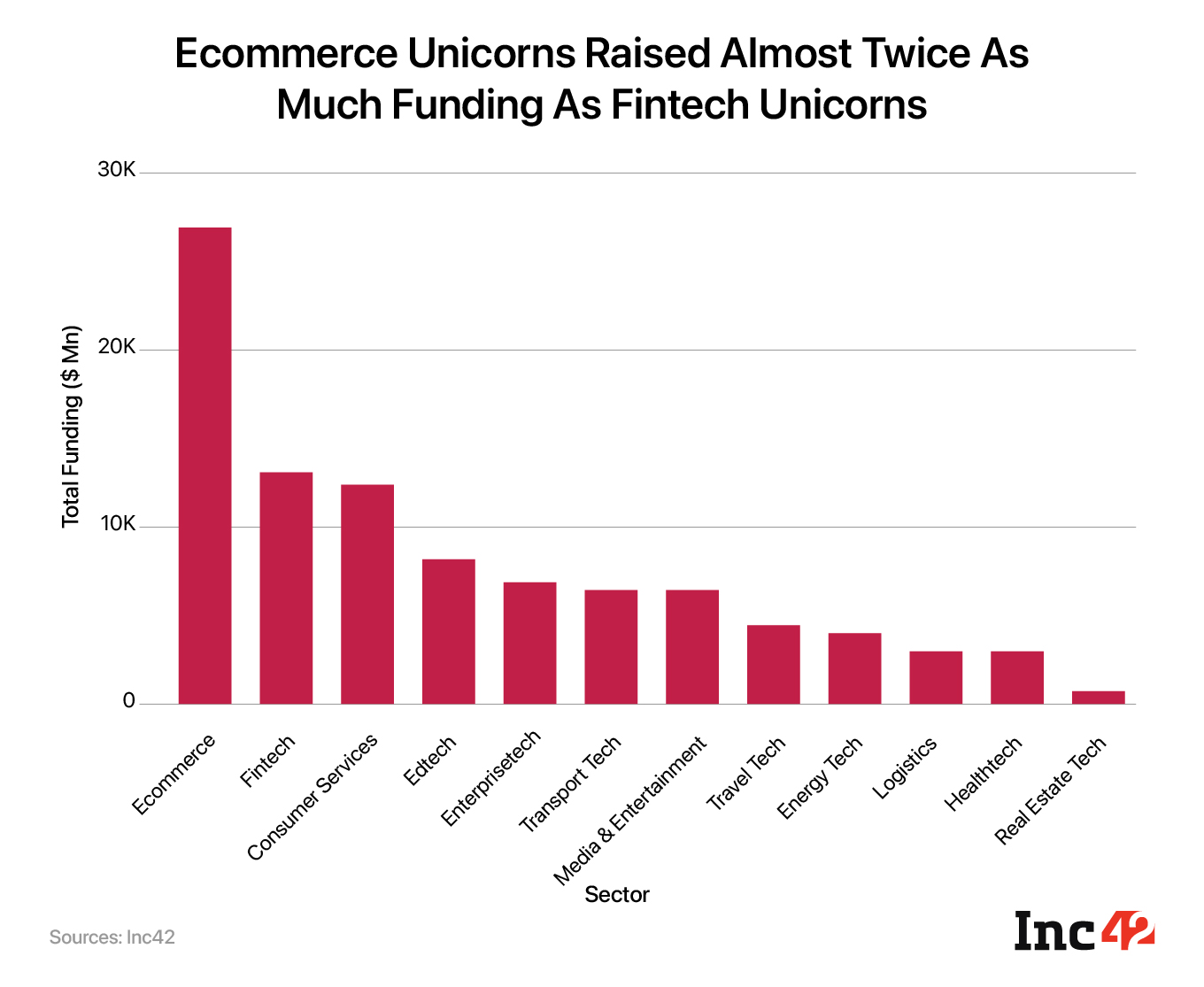 Flipkart has raised the most funds to date among ecommerce unicorns, raising an eye-watering $12.6 Bn in funding. To put that in perspective, the number is greater than the funding raised by all 21 unicorns in the fintech segment ($12.4 Bn).

The ecommerce giant has had the backing of marquee investors such as Accel, SoftBank and Tiger Global and international conglomerates such as Tencent and Walmart, who acquired it in 2018.

Fintech unicorns, on the other hand, have raised $12.4 Bn. The disparity among fintech unicorns is not as wide as it was in ecommerce, yet, the top four unicorns (Paytm, PhonePe, Pine Labs and Policybazaar) have raised more funding ($6.3 Bn) than the rest 17 ($6.1 Bn).

Where Are The Fastest Unicorns?

In the simplest of terms, transport tech unicorns took, on average, the least amount of time to get to unicorn valuation after incorporation. 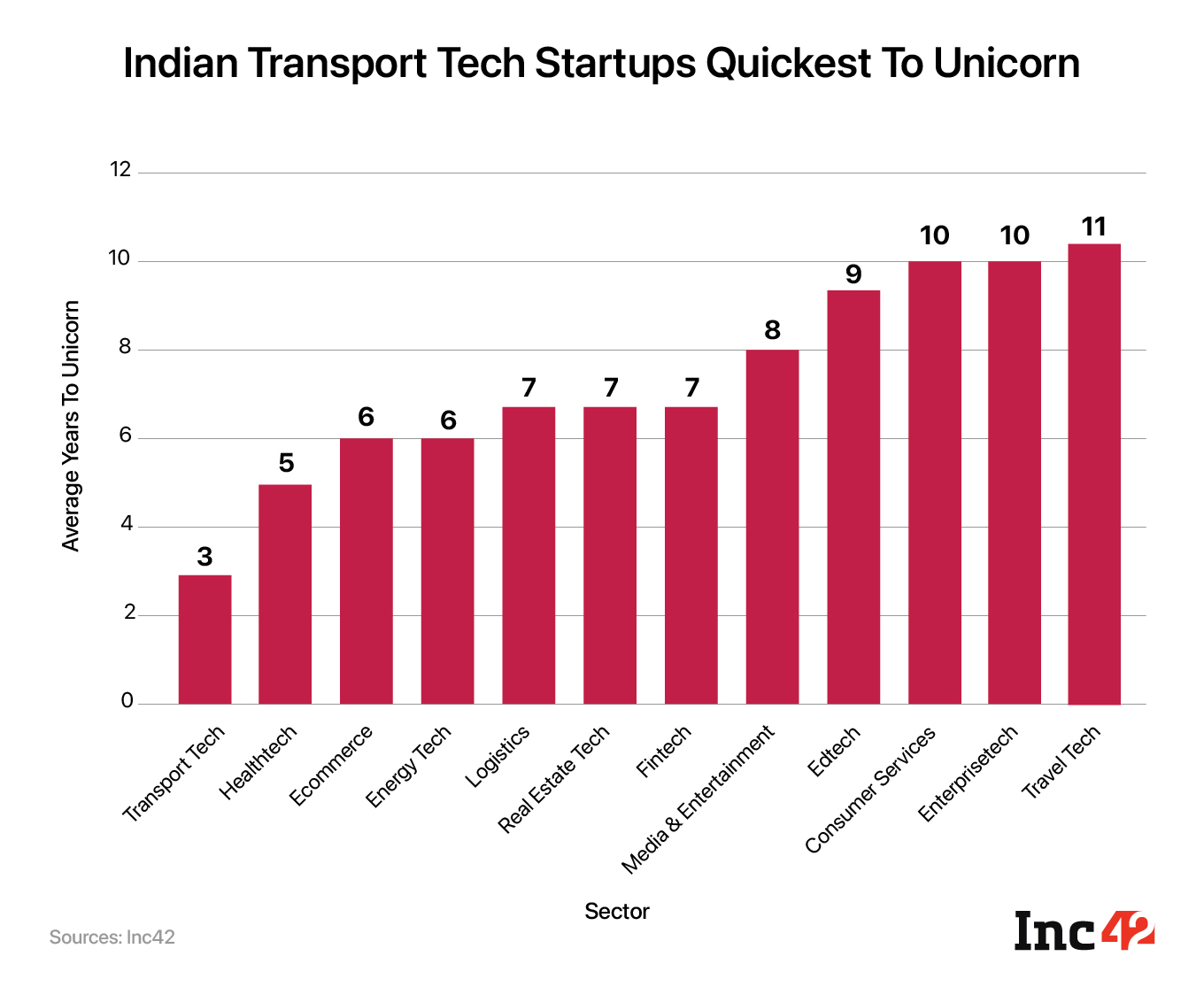 The sector has produced two of the Bhavish Agrawal-led unicorns, Ola and Ola Electric, which took 4 and 2 years respectively to become unicorns, which gives the sector an average of 3 years.

However, out of the top 10 fastest unicorns, 4 are from ecommerce and 2 are from fintech. India’s fastest unicorn, Mensa Brands, is a Thrasio-style startup, and this new business model has also produced India’s second-fastest unicorn in GlobalBees. Both of these startups took less than three quarters to reach unicorn valuations.

Among the healthtech unicorns, healthcare startup Pristyn Care became the fastest to hit unicorn valuation within its industry by reaching the milestone in 3 years.

The list of unicorns is all set to increase as India’s 100 soonicorns lay waiting for the next funding round.

Among the soonicorns, 31 of them are fintech startups, while only 16 are ecommerce startups. There are new sectors that will create their first-ever unicorns, such as agritech and deeptech, with three soonicorns each.

The government and industry stakeholders alike have pegged the Indian unicorn ecosystem to hit heights that are still hard to picture. However, getting 100 unicorns was also a pipe dream back in 2011, when India got its first unicorn.

India’s unicorns present some interesting trends, which give an idea of what the future might look like for the ecosystem as a whole. Almost all of India’s unicorns are based in large cities; the government, however, is shoring up its efforts to help the startup ecosystem proliferate to the grassroots of the country.

That is the next step – with Indians creating unicorns based in tier 2 and 3 cities.