No new unicorns were produced in April. In comparison, eight startups joined the unicorn club in April 2021

Bengaluru continued to remain the undisputed startup capital of India, bagging maximum funding and most deals

After the correction in the public market, it seems India’s private market is also witnessing the same trend, as investors who have invested millions of dollars are becoming more growth-focused. The decrease in funding, rise in acquisitions and layoffs are all pointing towards the correction and will be a litmus test for the thriving startup ecosystem of the country.

A look at the number of startups entering the coveted unicorn club also points at the correction or the slowdown in the market. While India produced a record eight unicorns in April last year, no startup was able to touch the $1 Bn valuation mark in April 2022.

Amidst all this, it should be no surprise that the funding raised by the Indian startups fell to its lowest in the first four months of 2022 in April. The Indian startup ecosystem received $2.6 Bn in funding during the month, a drop of almost 23.5% as compared to March 2022, when the ecosystem mopped up $3.4 Bn in funding. 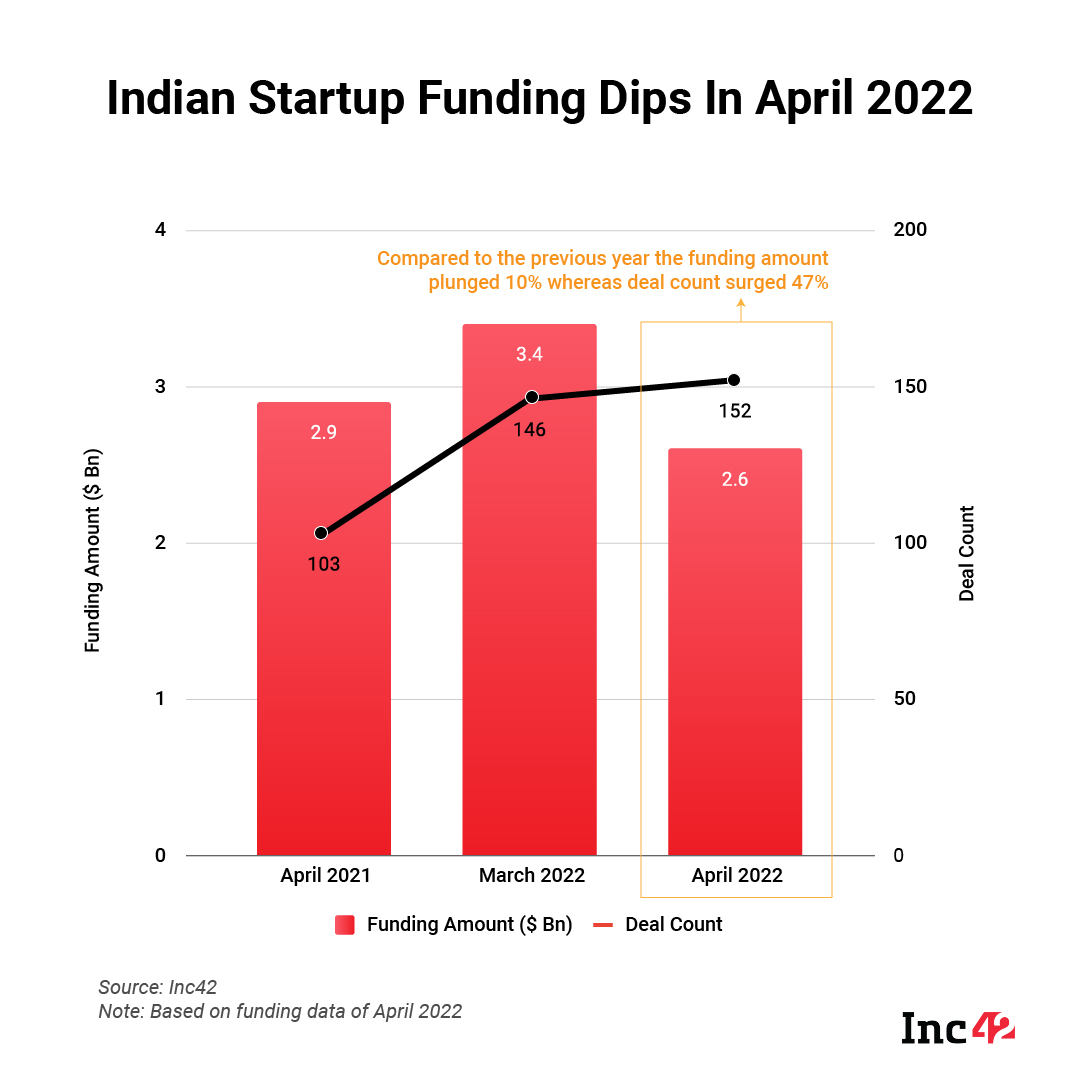 The month saw six mega deals, where the funding amount was $100 Mn or more. Here’s a list of the highest funding rounds in April 2022. 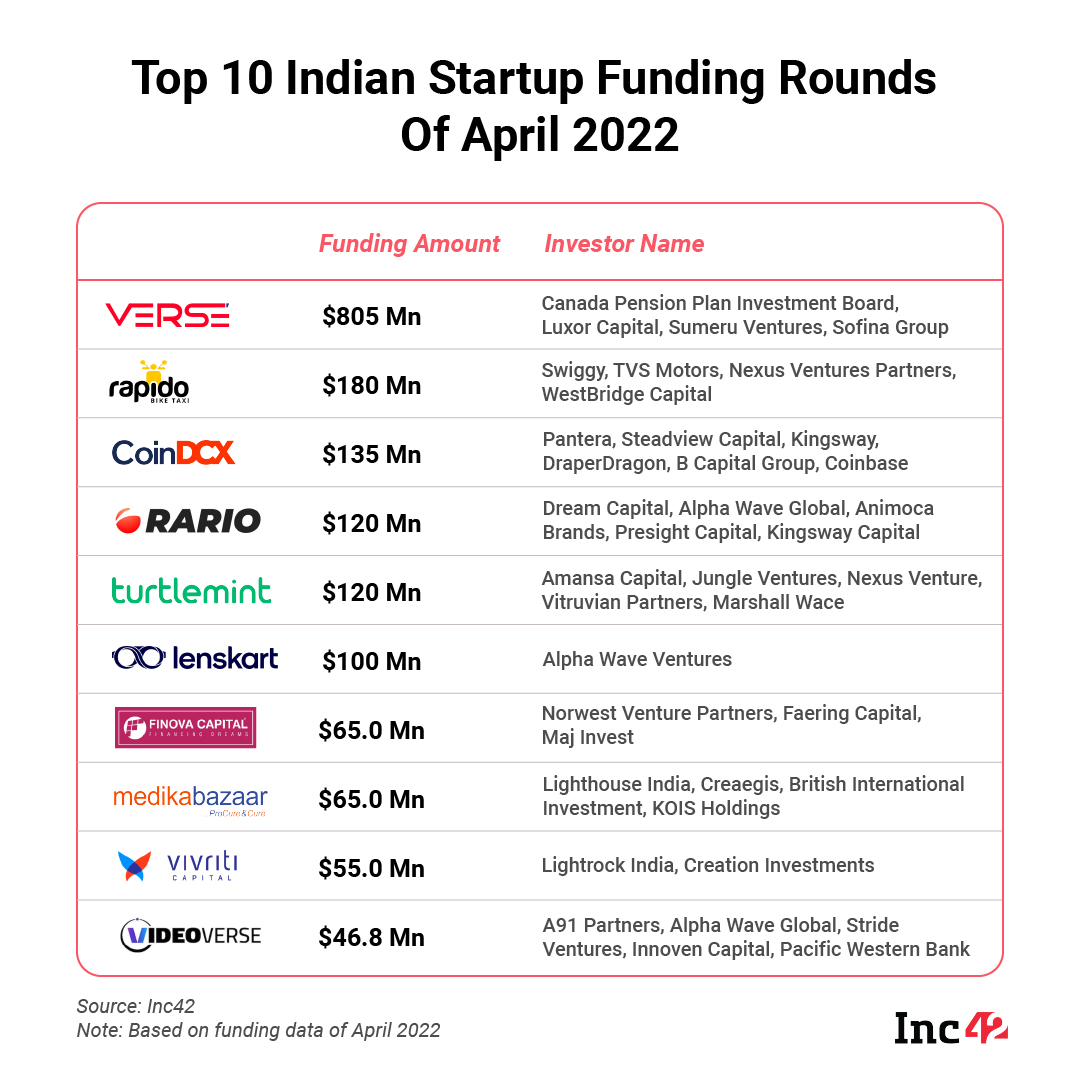 Peek Into The Funding Trends

While the overall funding declined in April, the total number of deals went up, meaning smaller deals increased during the month. A total of 152 deals were recorded during the month, a significant jump from 103 deals in April 2021. 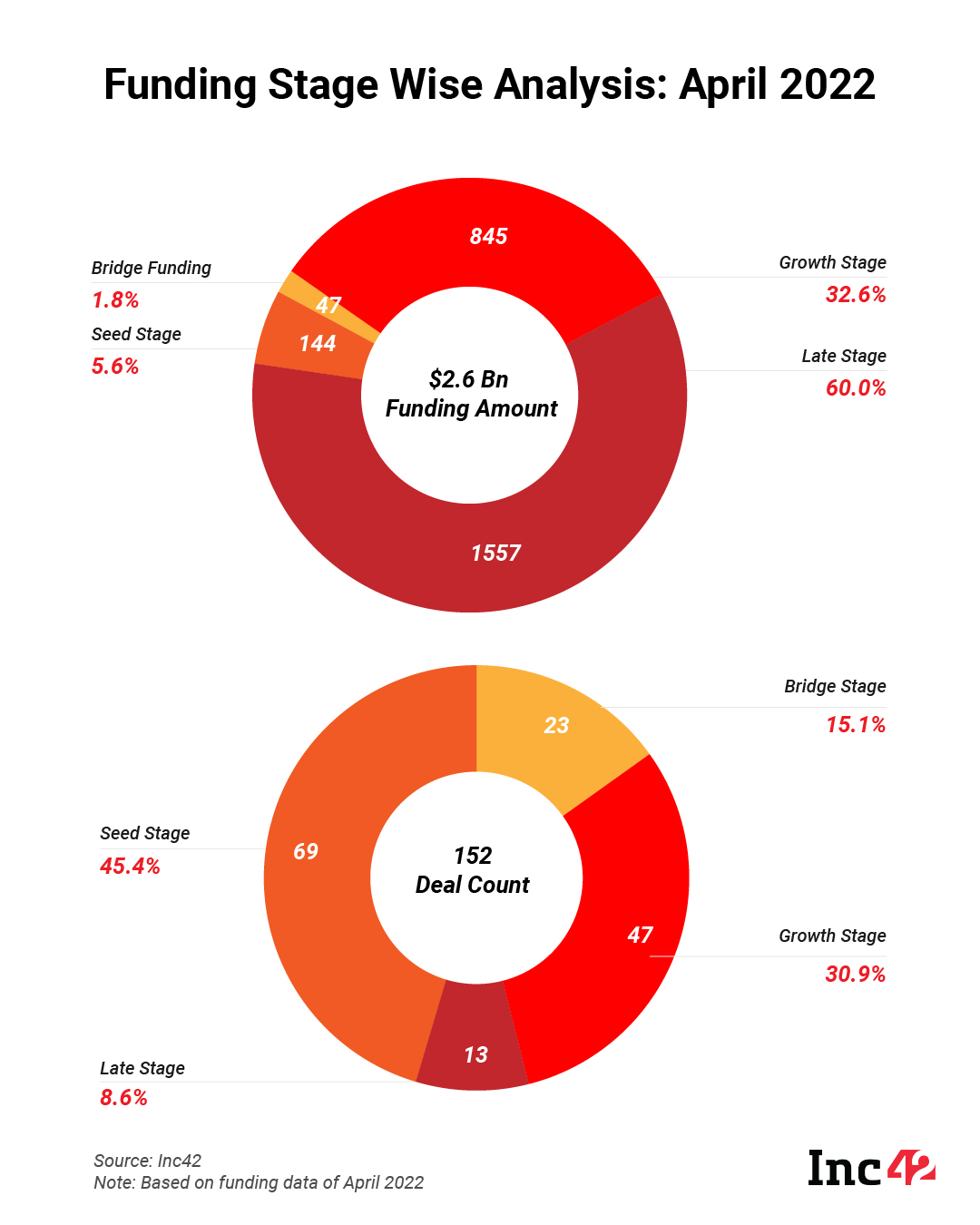 Led by a record $805 Mn fundraise by Verse Innovation, the parent company of Dailyhunt and Josh, the media and entertainment sector bagged 32.3% of the total funding during April 2022. 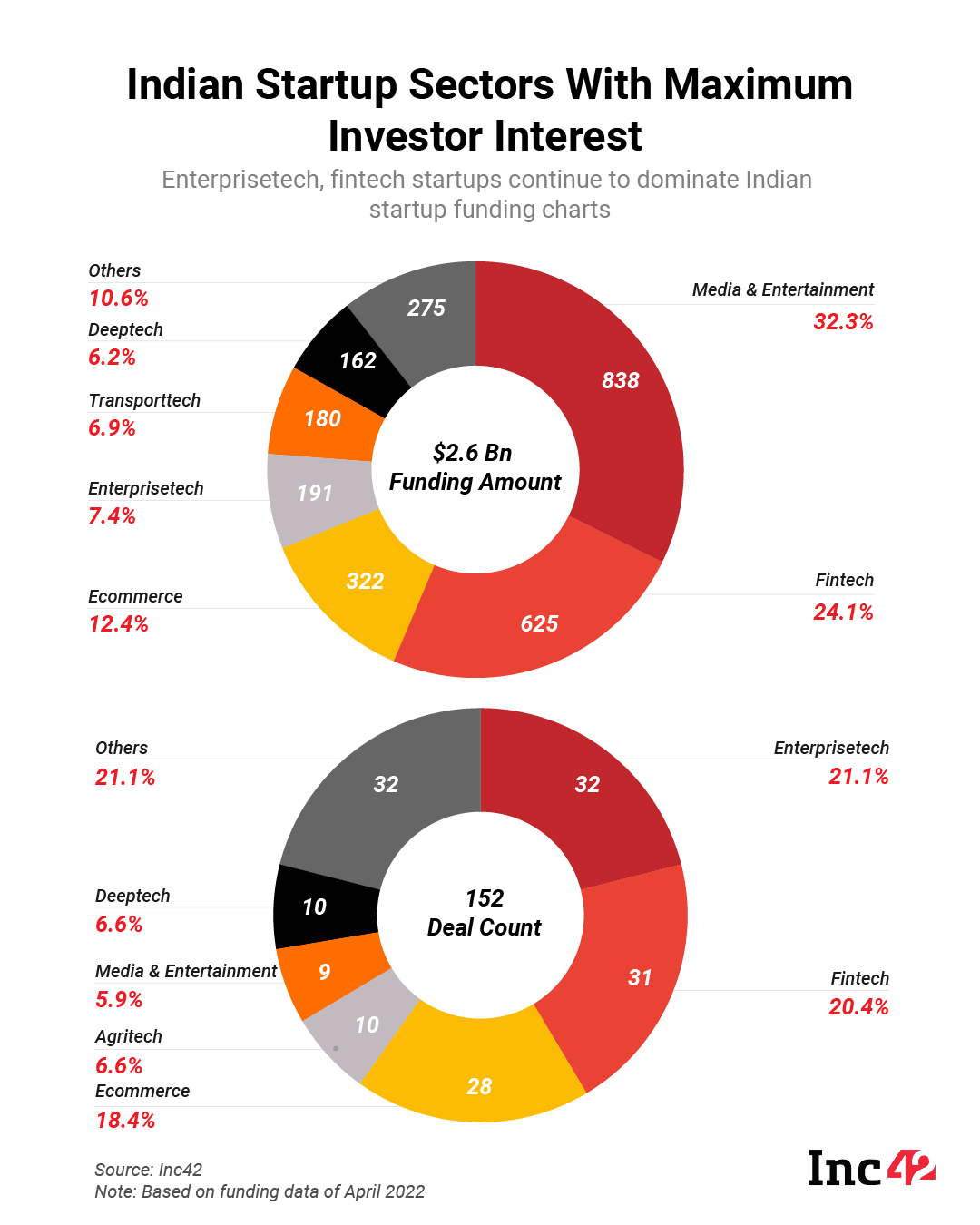 The fintech space sector took the second spot, securing 24.1% of the total funding. The enterprisetech sector reported the highest number of deals with 32 investments, followed by the booming fintech space which reported 31 deals. 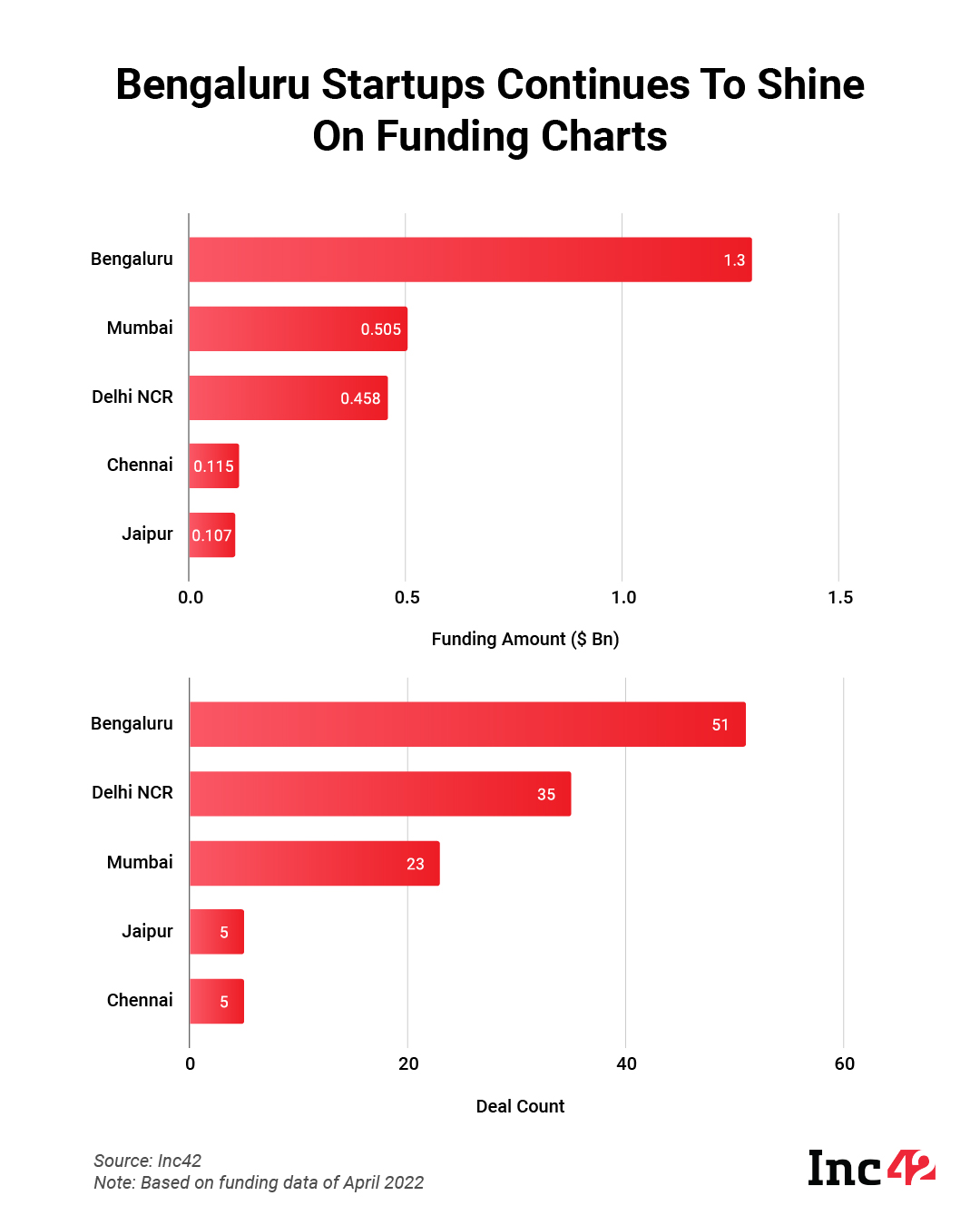 Bengaluru continued to strengthen its position as the startup capital of India, leading in terms of the funding raised and also the deal count. While Bengaluru-based startups raised $1.3 Bn during April, the deal count for the startups in the city stood at 51.