India’s Unicorn Boom: Where Does India Stand In The Global Arena?

India minted its 100th unicorn early in May, however, China and the US have created far more unicorns at 217 and 806, respectively

While India leads the world in terms of average funding raised by the unicorns, it lags far behind in the time taken to become a unicorn and the total valuation of these unicorns

The beginning of 2022 could not have been any better for India’s startup ecosystem. Having raised $11.7 Bn in the first quarter of the year in venture capital funding, the country has already minted 14 unicorns this year, including its 100th unicorn.

From getting its first unicorn in 2011 to completing a century of startups valued at a billion-dollar or more in almost a decade is no mean feat. This gives an average of 10 unicorns a year, however, the real push came in the last 16 months or so. Since the start of 2021, India has minted more than half of its 100 unicorns – 58 to be precise.

The pace of producing unicorns in the last year or so has led to people in high places setting big targets – from a very doable 250 unicorns by 2025, as noted by Mohandas Pai, ex-CTO of Infosys, to an ambitious 1,000 unicorns in the next couple of years, as said by the Union Minister of State for Entrepreneurship, Skill Development, Electronics & Technology Rajeev Chandrasekhar.

Whether India will achieve these targets or not is a matter of debate and will become clear in the due course of time, but it is a good opportunity to look at how other countries are doing and how India stands against them.

For every unicorn that India produced in 2021, the United States produced almost 8. According to Traxcn data, the US produced 321 unicorns in 2021 as against 44 produced by India.

China, on the other hand, produced only 21 unicorns in 2021, data from Traxcn shows, half of what India managed. However, it can boast of having twice the number of unicorns as India, at 217.

Meanwhile, Israel also saw 42 of its startups entering the unicorn club in 2021, according to Tech Aviv. The Middle Eastern country is fast becoming a startup hub to be reckoned with, and has 92 unicorns, as per data from Tech Aviv.

As India celebrates hitting a century of unicorns, the question is if the country has the potential to be the startup capital of the world. Here are six charts that present the big picture, using the data from DataLabs, CB Insights, Traxcn and Tech Aviv.

India – The Third-Largest Unicorn Hub, But Has To Watch Its Back

With a total of 100 unicorns, India has the third-highest number of startups valued at a billion dollars or more.

However, it lags behind eternal rival China, and the world’s current unicorn hub, the US, by quite some distance. In fact, the US has more than 8 times the number of unicorns as India. 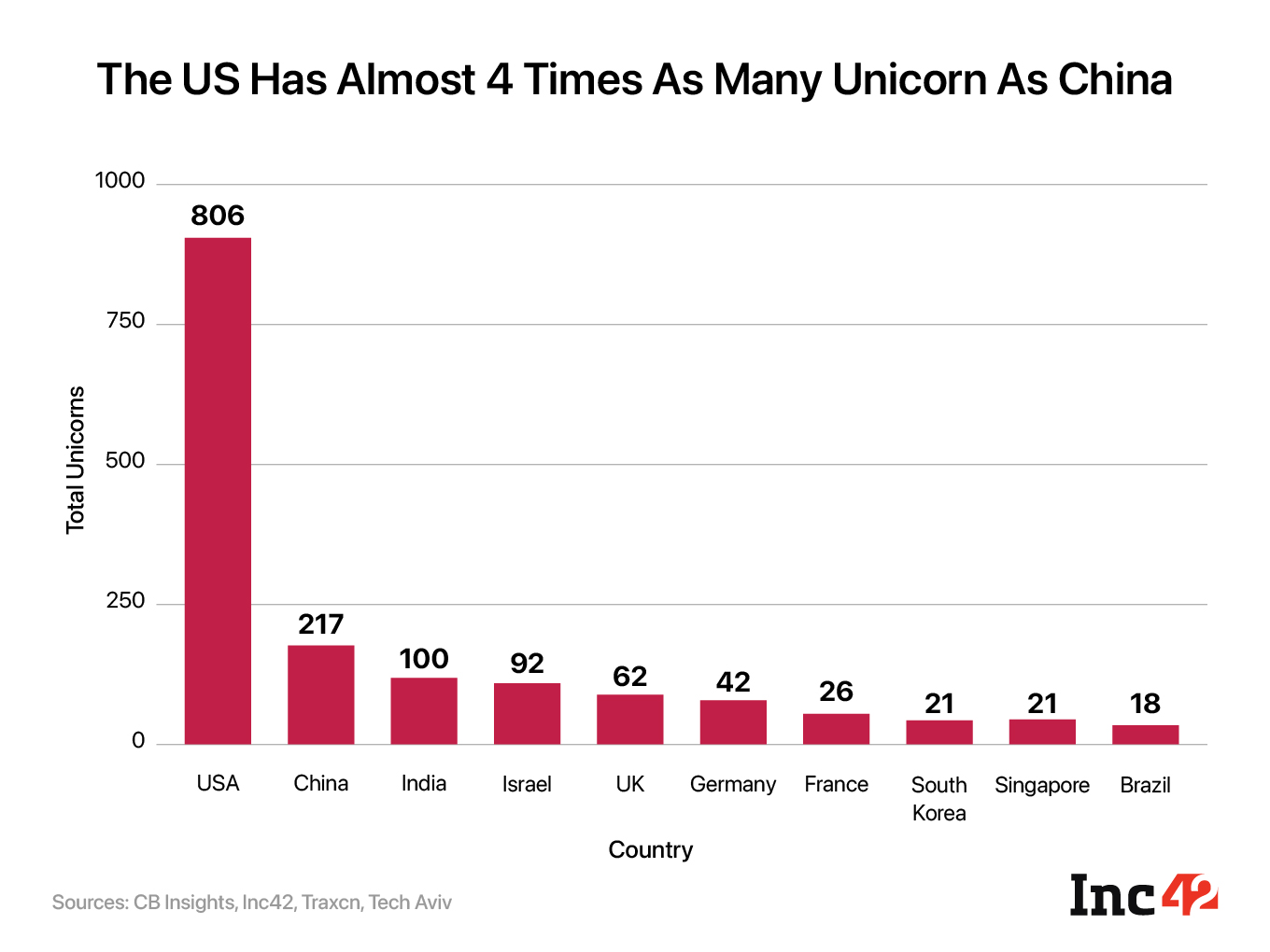 Israel is in the fourth position with 92 unicorns, while the United Kingdom, Germany and France together have 130 unicorns.

Brazil surprisingly features as the 10th largest unicorn hub, with 18 unicorns calling the country their home.

It is clear from this that while India has placed itself as a world leader in the startup space, it is not alone at the top. In fact, Israel has the potential to catch up and even overtake India’s unicorn count in the next few years if India becomes complacent. 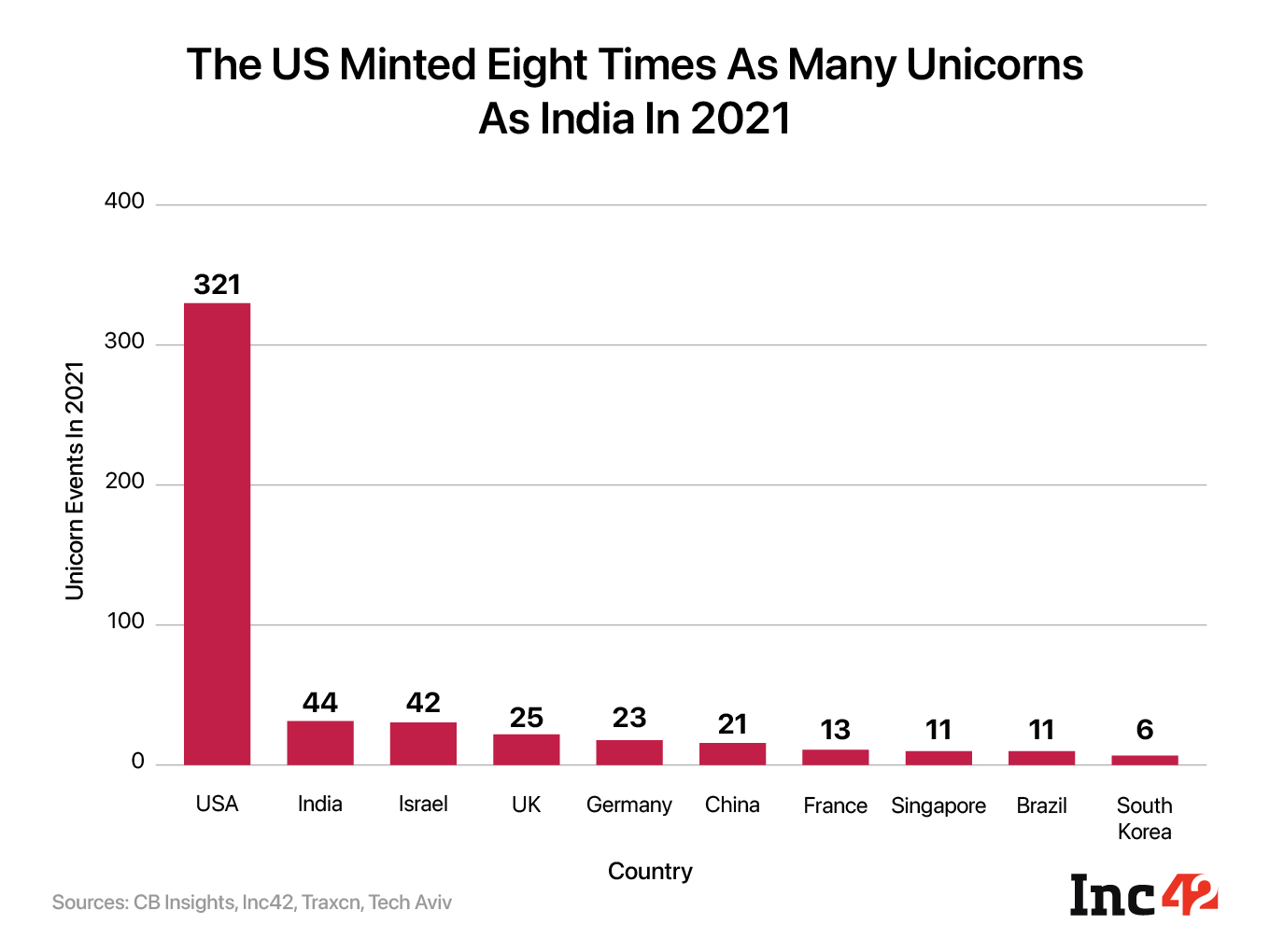 The US got a whopping 321 unicorns in 2021, more than the number of unicorns together produced by the next nine countries, including India, on the list.

This means that almost one-third of the 806 unicorns that the US has were produced in 2021 itself. Meanwhile, Israel managed to almost match India’s performance, minting 42 unicorns during the year.

The Indian unicorns have raised a total of more than $89 Bn in funding to date, with an average funding amount of about $906 Mn. 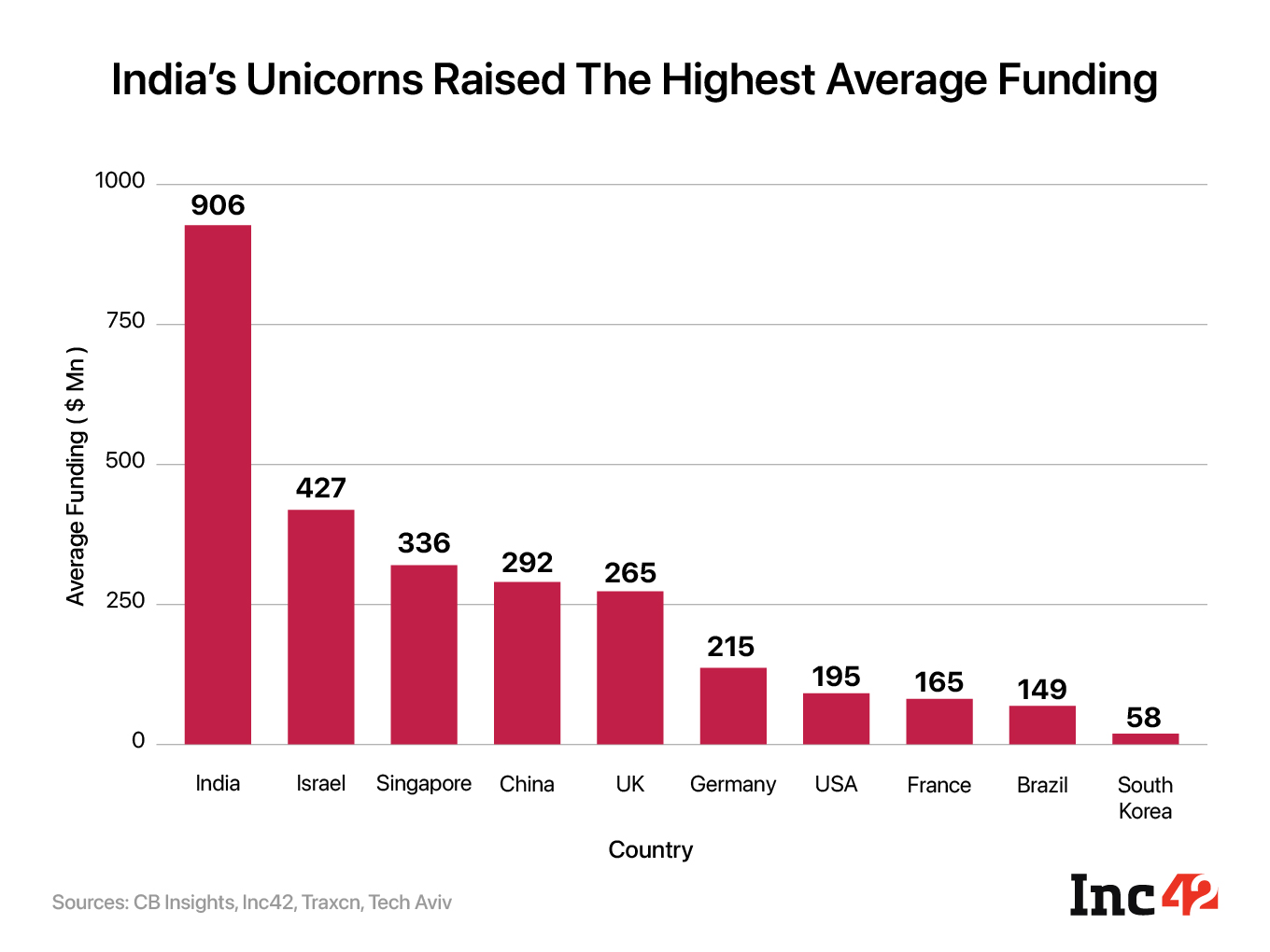 Israel is second on the list with the average funding raised by the unicorns at less than half of India’s unicorns.

Surprisingly, the US finishes seventh on the list, while China is at the fourth spot.

The Need For Speed

While some startups take years to reach the coveted $1 Bn valuation mark, some can blitzkrieg their way to becoming a unicorn. A case in point is Mensa Brands, which took only 6 months to become a unicorn, the fastest Indian startup to do so.

However, Indian startups’ time taken to unicorn status is way more compared to other major countries in terms of the number of years taken by a startup to turn into a unicorn. 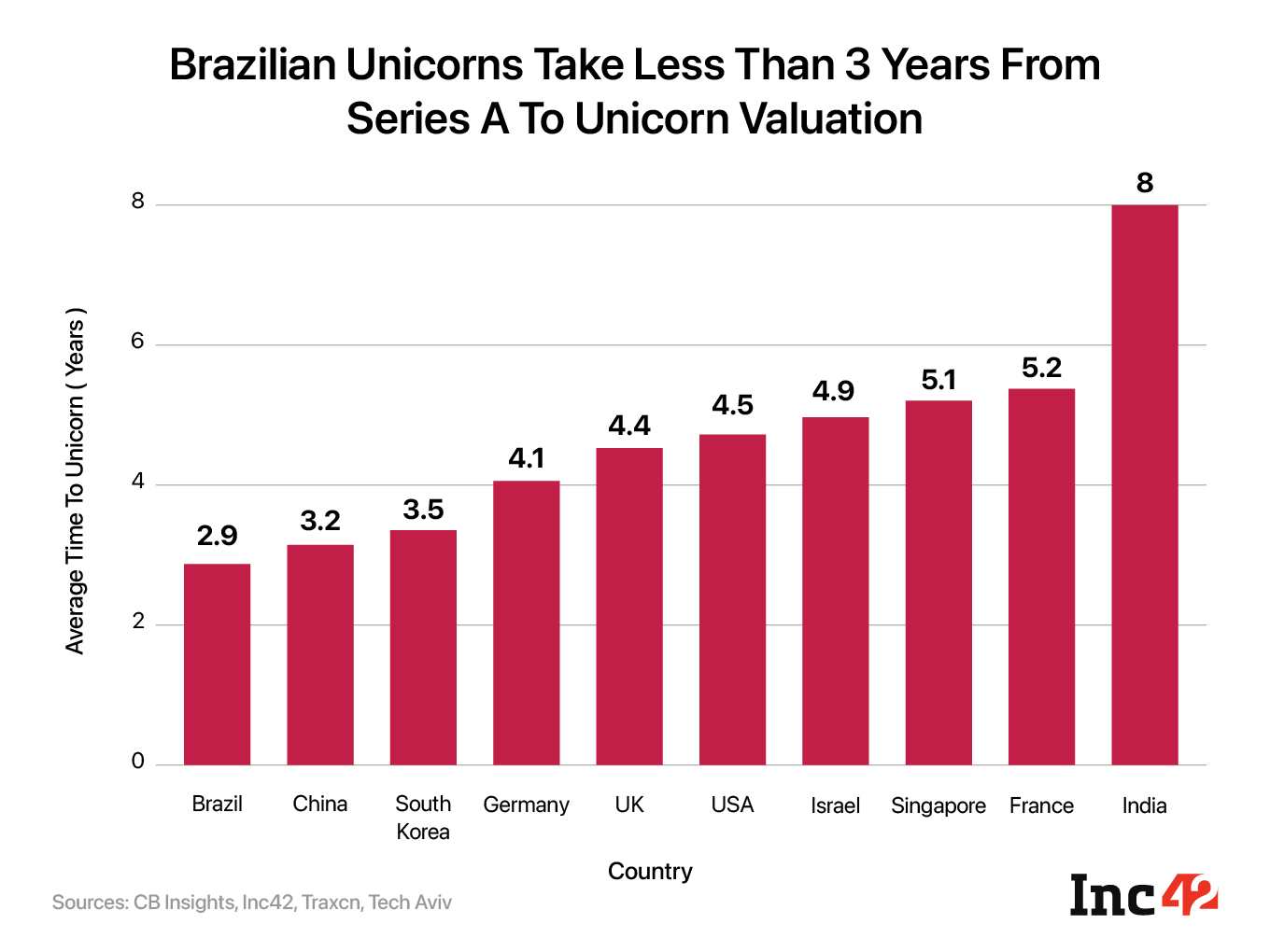 India is at the 10th position when it comes to the time taken by a startup to become a unicorn, at 8 years, while Brazil leads the chart with just 2.9 years.

China and the US are in the second and sixth positions, respectively.

The Hallowed Lands Of The Trillion Dollar Startup Valuations

It does not seem entirely out of the question that one day, India’s unicorns will collectively be valued at more than $1 Tn, a feat that has only been achieved by one country so far. 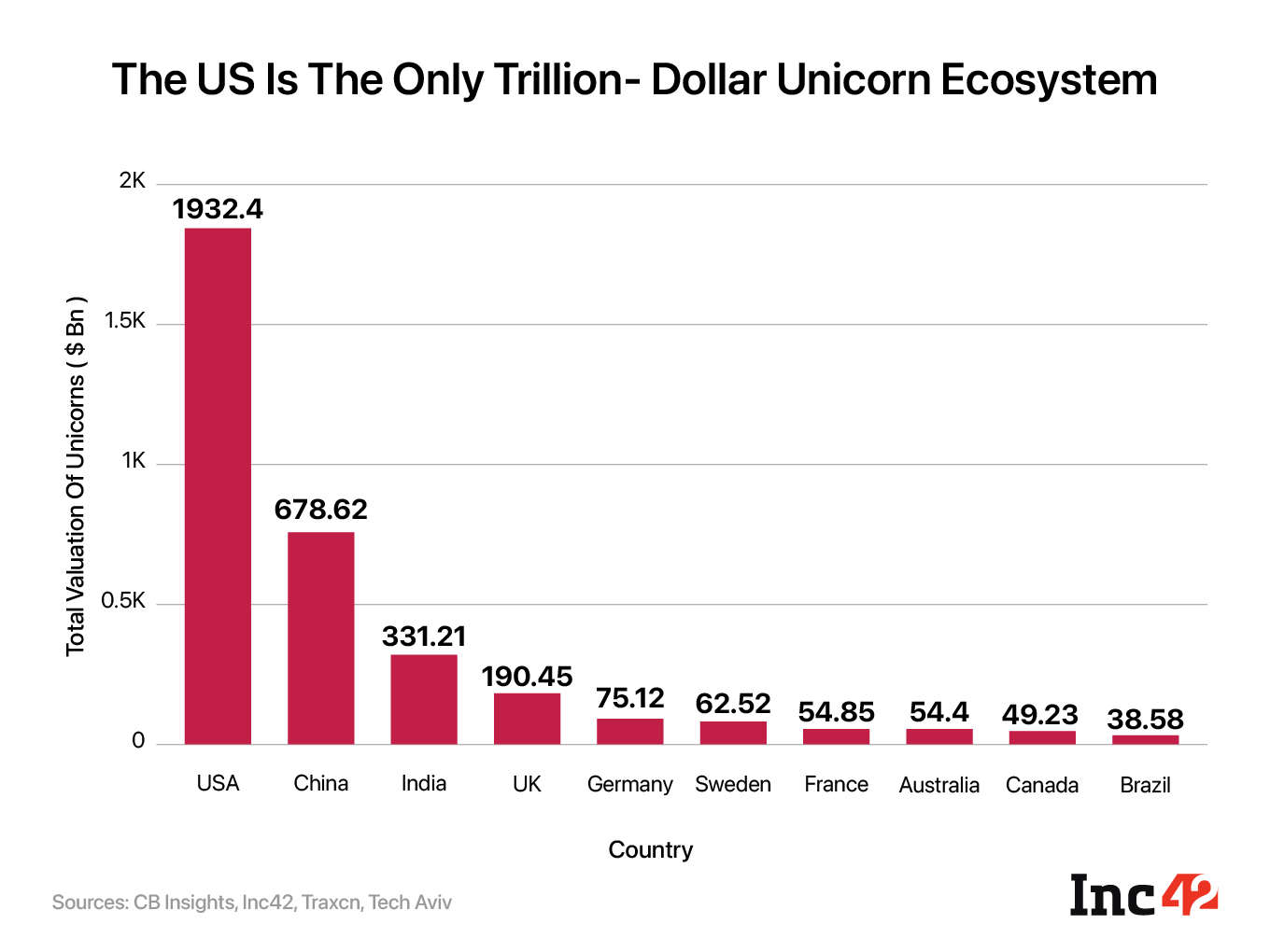 The US tops the chart by a country mile, with its unicorns valued at almost $2 Tn, thrice as much as China, and almost 6 times as much as India, which is at the third spot.

The ecommerce sector forms the largest chunk of unicorns in India, with 23 out of the 100 unicorns in India coming from the sector. Fintech startups are in the second spot with 21 unicorns.

On the world stage, however, the roles are slightly different, as ecommerce is ranked third. 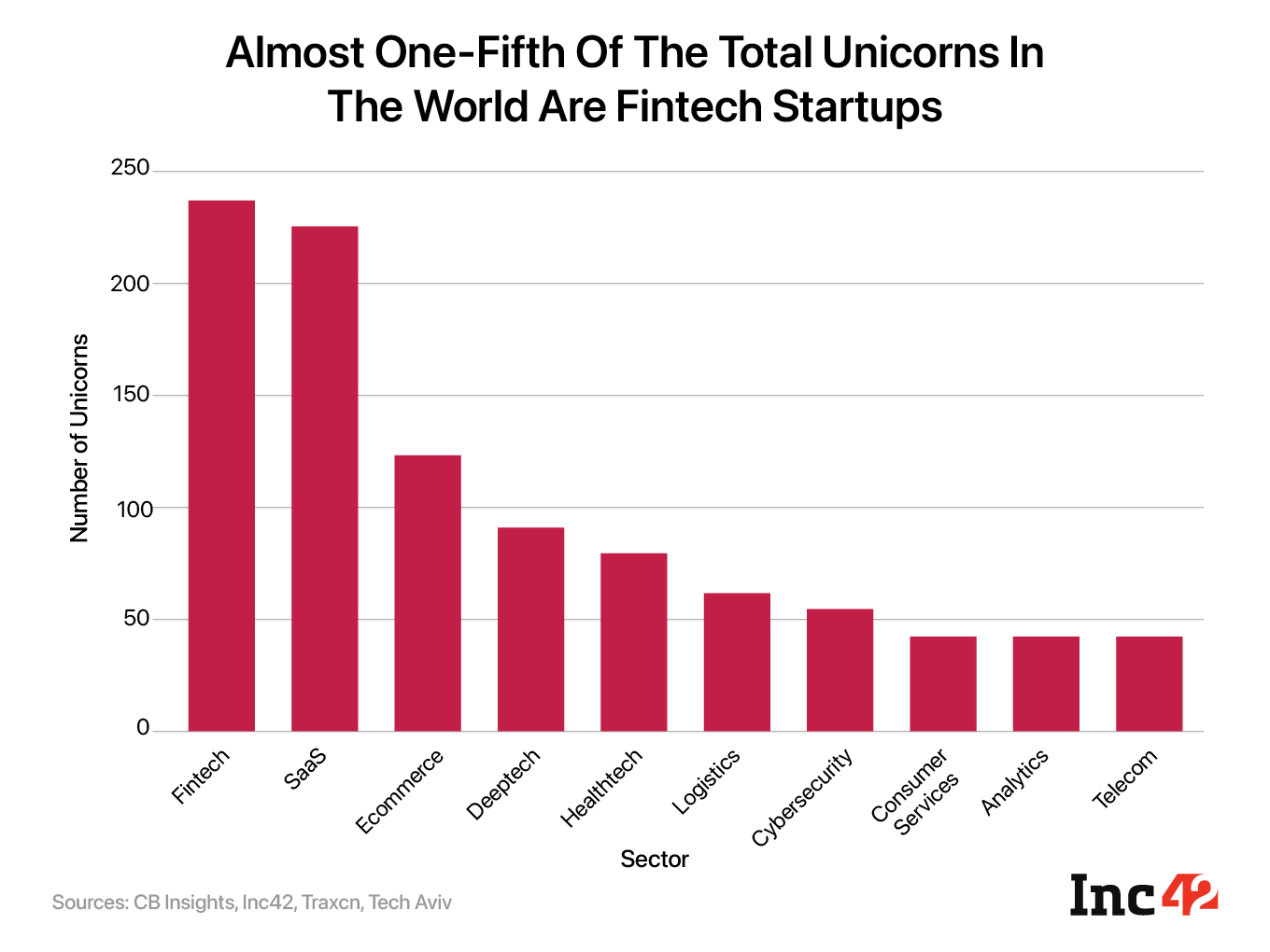 The fintech sector is at the top position, with 238 startups out of the 1,132 unicorns in the world, as per CB Insights. SaaS startups are in the second spot with 217 unicorns.

Interestingly, segments like telecom and deeptech, which are still at a relatively nascent stage in India’s startup ecosystem, have managed to mint a significant amount of unicorns elsewhere, clocking up 131 unicorns among the two segments across the world.

When Open became India’s 100th unicorn, celebrations erupted across the country, with the government and all the major stakeholders calling it a sign of bigger, better things to come.

While that might be true, the government and the startup ecosystem still have a lot of work to do to make it easier for the next set of startups to turn unicorns. After a stupendous 2021, the Indian startup ecosystem is seeing the capital inflow slowing down. While no new unicorns were produced in April, only about $2.6 Bn was raised by the startups in funding.

India’s ‘ease of doing business’ or EoDB ranking has improved, however, the on-ground indicators suggest a tough time for many tech companies looking for success in the country.

Regardless of how many unicorns India produces, the country needs to create a positive environment for startups to flourish. This starts with favourable policies and modernising the entire policy framework that supports the ecosystem.