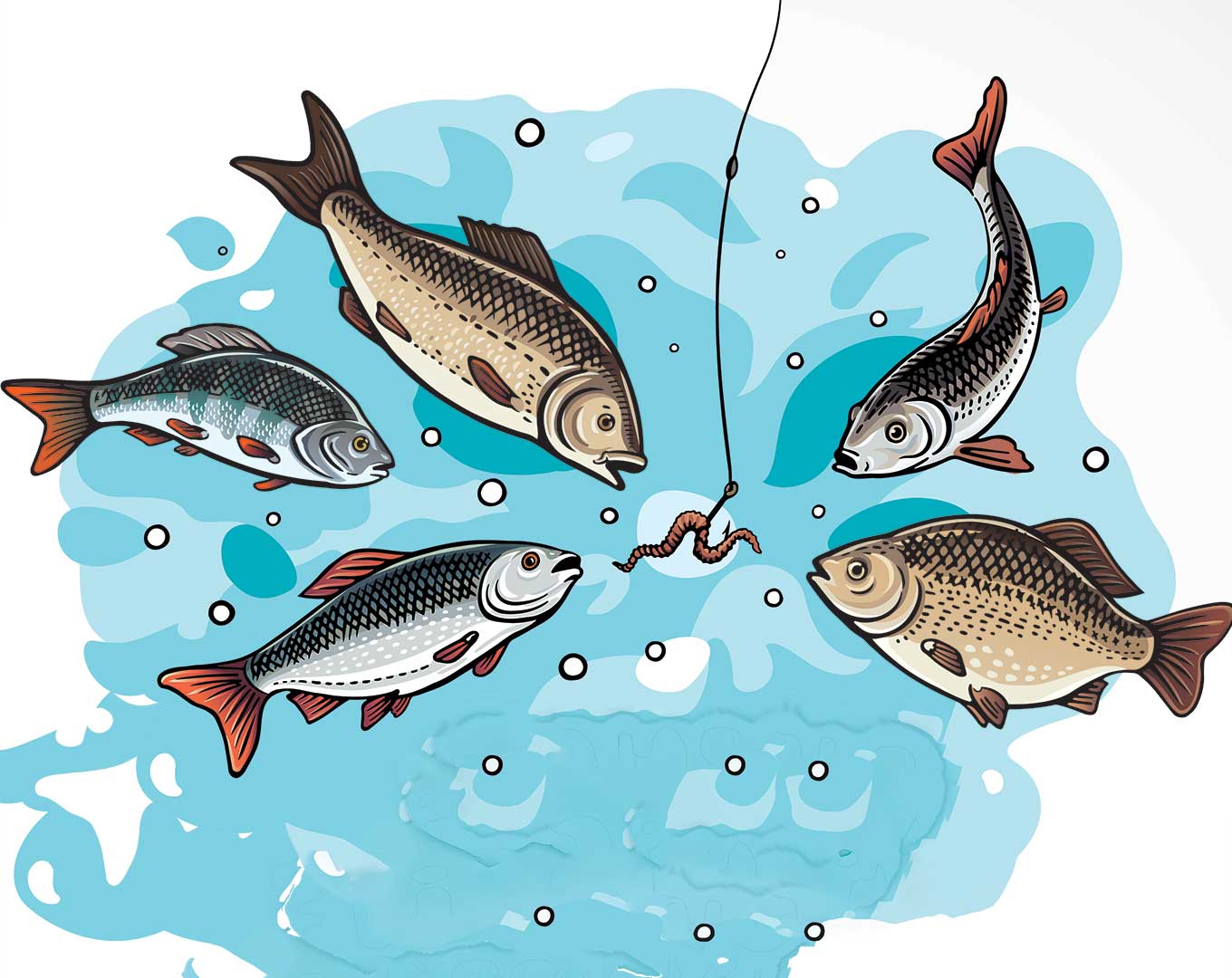 Cumulatively, the UPI-based payment apps incurred a loss of over INR 8 Cr for May 2020 as per DataLabs analysis

India’s digital payments growth is so closely linked to the growth of the unified payments interface or UPI that often the two are clubbed together in any discussion pertinent to the sector. But the fact is that UPI is just one part of the digital payments landscape.

But since UPI transactions constitute only a part of the total digital payments ecosystem, it would be erroneous to make any claims regarding market leaders in digital payments just on the basis of UPI market share.

Since the UPI payments flow is standard on competing platforms, payments apps have resorted to add-ons and offers to attract more users. All apps also offer cashbacks and discounts for UPI-based payments. For example, Google Pay and PhonePe both offer have cashbacks for purchases made through their platform or through partners. In Paytm’s case, these discounts are also offered for using the Paytm wallet or Paytm Payments Bank through third-party apps such as Swiggy and Zomato. And of course, besides individual transactions or P2P transfers, UPI apps are being increasingly used for merchant (P2M) transactions as well through QR code and apps. Besides UPI payments, PhonePe has also enabled ATM services through local retailers.

But despite the fairly large share of UPI among all digital payments, the revenue model for purely UPI-based payments services is not sustainable in the long run.

Inc42
accessed the NPCI circular number OC-77 dated December 6, 2019 through a confidential source. The circular, which has not been released officially by the NPCI on its website, outlines the payments and fees between issuers and acquirers as well as payment has not been posted in the official circular records, apps that only support UPI-based payments will only earn revenue through peer to peer transactions with zero merchant discount rate applicable on P2M transactions.

This fee structure, combined with the data related to the transactions from each platform for May 2020 as reported by Entrackr, gives us a clear insight into this. Payment apps such as Google Pay, Paytm, PhonePe, Amazon Pay and even the government’s BHIM app are losing over INR 8 Cr for May 2020, as per DataLabs analysis of the switching fee that these apps have to pay for each transactions. 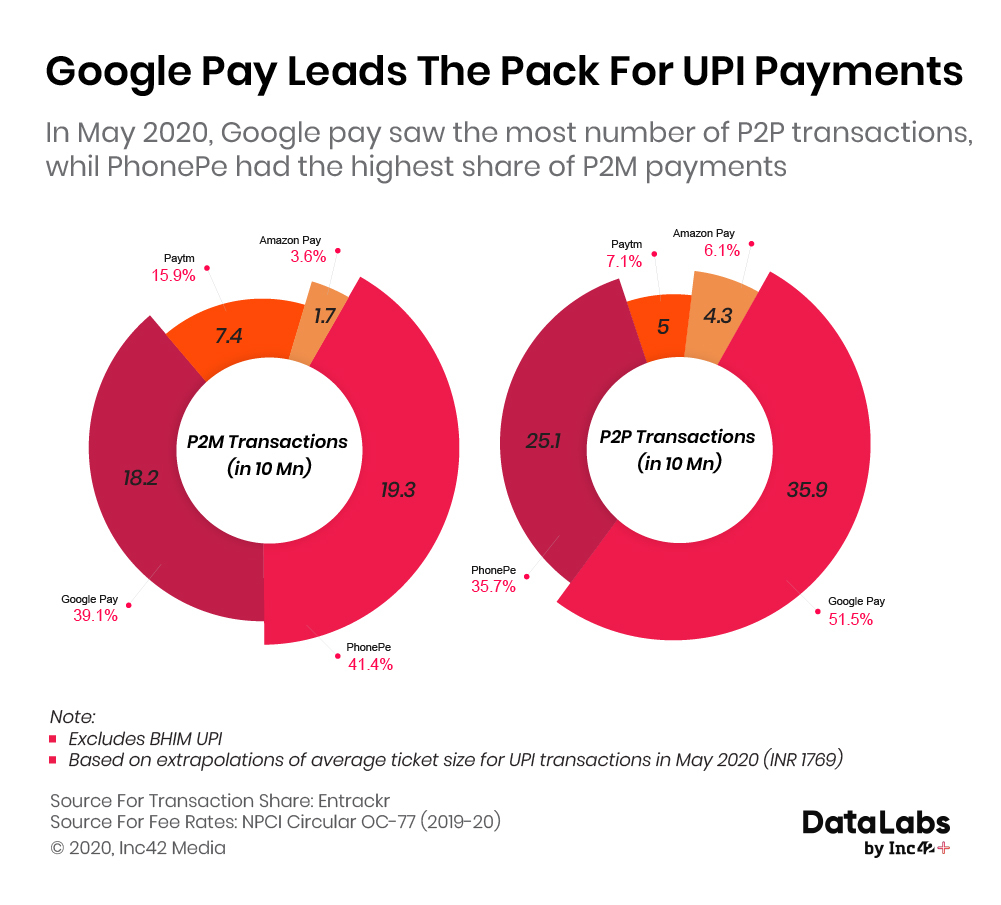 Google Pay and PhonePe have the biggest net losses for facilitating UPI transactions, after extrapolation of data based on an average UPI ticket size of INR 1,769 for May 2020. For June 2020, with an average UPI transaction size of INR 1,937 and only a slight increase in number of transactions from 1.23 Bn to 1.34 Bn suggests that while the market share numbers may differ slightly, the overall amount of losses would be slightly higher for each company. Since the switching fee is paid on each transaction and the size of the transaction only has a minor impact on the fee paid, the losses in June would be hover around the INR 8 Cr mark that was seen in May 2020.

In fact, given the zero MDR rule to push digital payments through UPI and RuPay, payment apps such as Google Pay, PhonePe, Paytm, Amazon Pay stand to earn very little from UPI payments, if anything at all.

NPCI did not respond to Inc42 queries on the veracity of the circular. We also did not receive responses from PhonePe or Google Pay in relation to the losses suffered by both companies in facilitating UPI payments.

The loss is borne by the acquirer app as well as the issuing and acquiring banks as per mutually agreed terms. But since payments apps have to pay for the additional expense of acquiring merchants and customers, the overall loss to these apps such as Google Pay, Paytm, PhonePe and Amazon Pay is much higher.

While in merchant transactions using credit card and debit card (MC/VISA), the acquiring bank, issuer bank and network earns a share of 1.5% and 0.9% of the value of the transaction respectively, there’s no such fees for UPIs since the government is looking to push adoption through zero MDR.

Like the P2M model, the P2P model for UPI fund transfer is also loss making for all players — again led by Google Pay and PhonePe for May 2020. But it’s less burdensome. Based on the average ticket size of INR 1769 for UPI transactions in May 2020 and the same metric for previous four months of the year (ranging between INR 1512 and INR 1678), it can be surmised that more UPI transactions are under the INR 1000 mark than over it. Assuming a 60:40 ratio, the 35.9 Cr P2P transactions on Google Pay resulted in a net loss of INR 36 Lakh, while PhonePe suffered a loss of INR 25 Lakh.

The Need To Think Beyond UPI

Diversification of revenue is critical for long-term sustainability in payments in India. For example, Paytm has offset its UPI dependency through its Payments Bank, payment gateway revenue as well as Paytm Wallet usage — all of which are not governed by the switching fee and the zero MDR of UPI payments.

A UPI-heavy payments model will not reap much rewards. In the case of Google Pay, outside India, the platform currently allows online and peer-to-peer payments by connecting a traditionally issued payment card. Google is looking to bring similar functionality to the Indian market as well, which will definitely help it earn more revenue.The company confirmed last year that it will also be expanding the use cases for Indian version of Google Pay app to add support for bank credit card and debit cards.

“We’re also making payments available to debit and credit cardholders through ‘tokenized’ cards — a secure way of paying for things using a digital token on your phone rather than your actual card number,” Google had said.

Google Pay, for instance, has an in-app virtual storefront for retailers and other apps called the Spot platform. Similarly, PhonePe has Switch for virtual storefronts and in-app services, while Paytm is also bringing virtual stores from nearby merchants. Further, PhonePe is looking beyond UPI with the point of sale payments vertical, having tied up with PoS solutions provider Payswiff last year. It also operates a digital wallet like Paytm, but it is still UPI that drives most of the usage on PhonePe because of the ease of use and the fact that one does not need to maintain a wallet balance to use it.

So even as UPI has been one of the biggest success stories to emerge out of India in this century, payment apps cannot just hope to sustain their business with UPI alone. The over-dependency of payment apps such as Google Pay and PhonePe on UPI will become a heavier cross to bear in the long run. These and other payment apps need to diversify their revenue source or models in the near future.

One possible way for payment apps to diversity could be the New Umbrella Entity (NUE) for Retail Payment Systems, which has been proposed by the Reserve Bank of India (RBI). The central bank has invited startups, tech companies and other businesses to compete directly with the National Payments Corporation of India (NPCI), which has created the national digital payments infrastructure. This means that “payments system operator, payments services provider, or technology services providers” will be able to create a payments ecosystem extending to modes such as ATMs, point-of-sale devices (PoS), Aadhaar-based payments and remittances.

The Draft Framework for authorisation of a pan-India New Umbrella Entity (NUE) for Retail Payment Systems has set a minimum capital requirement of INR 500 Cr and has stipulated certain conditions in shareholding patterns for any company seeking approval to become the NUE. It will also be responsible for setting up, managing and operating new payment systems, especially in the retail space. The NUE would also be allowed to operate clearing and settlement systems, identify and manage relevant risks such as settlement, credit, liquidity and operational and preserve the integrity of the systems, monitor retail payment system developments and related issues in the country and internationally. Further, it can carry on any other business “as suitable to further strengthen the retail payments ecosystem in the country.”

With inputs from Sandeep Singh