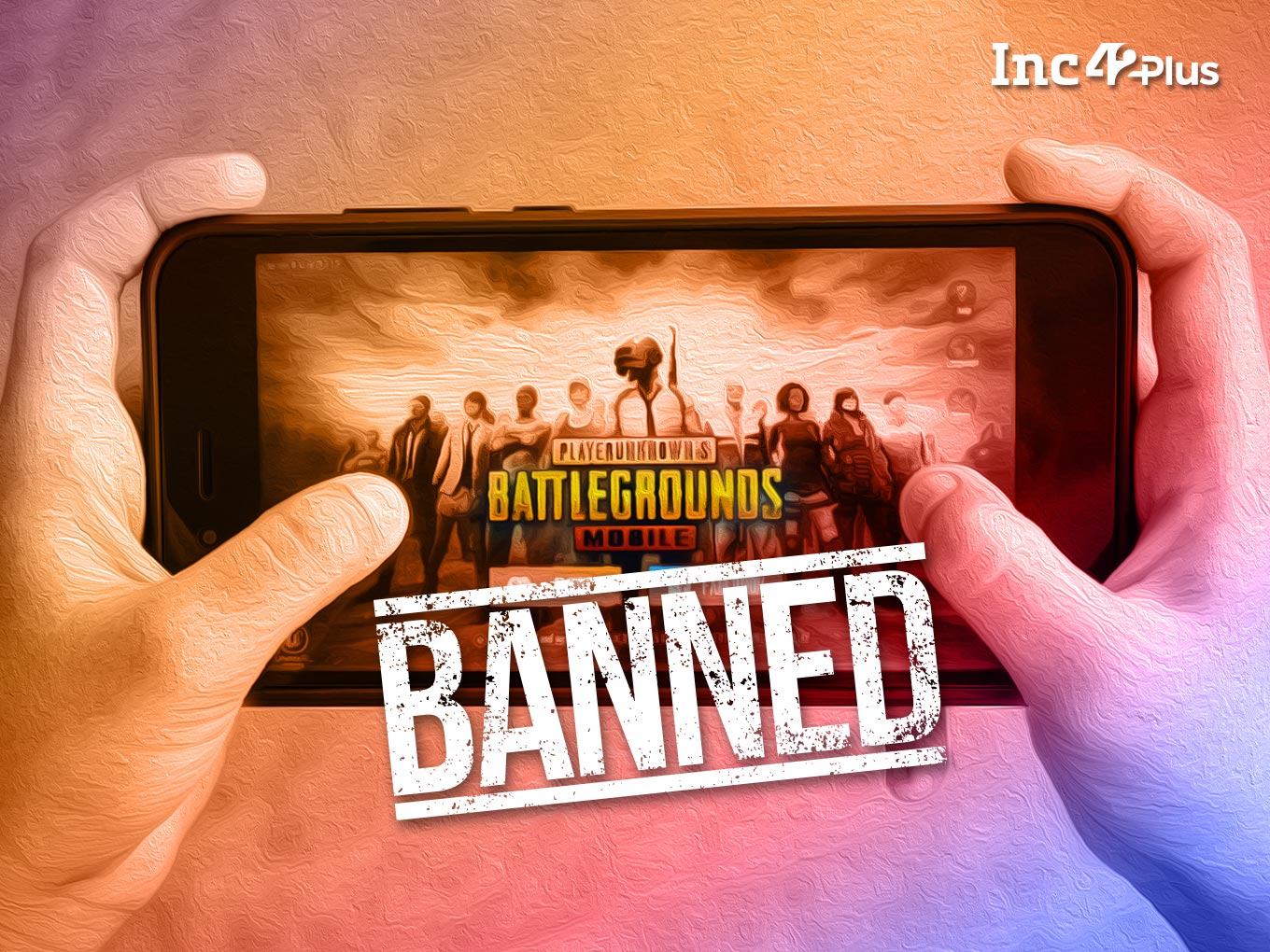 The government recently banned 118 Chinese origin apps, out of which 35 were gaming apps, including PUBG being the most popular among them

On September 2, 2020, India banned 118 games and apps of Chinese origin in the third wave of bans by the government. The latest ban has taken the total tally of banned apps to over 200.

Unlike the first two bans, the most recent one primarily targeted gaming apps build by Chinese and Hong Kong companies. Among the 118 banned products, 35 were games and among these, PUBG Mobile was the most high profile game to be banned.

Despite recently updating its privacy policy, PUBG Mobile could not escape India’s hammer and the ban on the wildly-popular multiplayer battle royale game dismayed a large number of gaming enthusiasts as well as amateur and professional esports players. In India’s fledgling esports market, PUBG Mobile has been making the biggest waves in recent years and the ban could have repercussions on the industry as a whole.

Besides PUBG Mobile, other action or battle royale titles such as Cyber Hunter, Cyber Hunter Lite, Knives Out-No rules, just fight and Super Mecha Champions were also banned in the most recent crackdown.

It must be noted that the beta version of PUBG Mobile has not been banned by India, but currently, it has a waitlist and only those who have previously downloaded it can download it again at the moment. However, that does not mean that one can play a game since the app ban has been implemented at a server level and would likely check for location of the player.

Before PUBG Mobile became the craze that swept India, the market was not even a blip on the global esports radar. While games such as Quake, Counter Strike, Need For Speed and FIFA always had a sizable following in India, it was not from the global esports perspective, but rather about local bragging rights. Plus, it required dedicated hardware, which is not easy to access in India.

With smartphone gaming, the hardware barrier was more or less eliminated and mobile games took India by storm by 2010 and 2011, when more high-end smartphones became available in India. The launch of Jio made it easier for Indians to download heavier titles and play multiplayer games more easily, but it wasn’t until PUBG Mobile came on to the scene that esports as a market opened up.

When it launched in March 2018, PUBG Mobile became a cult hit and soon enough became so mainstream that even Prime Minister Narendra Modi was heard referring to the game in a political rally. According to esports content platform, AFK Gaming — PUBG Mobile contributed to 18% to the total esports prize money pool in 2018, with the entrance into the field officially, contributing INR 50 Lakh tournament backed by Chinese tech giants OPPO and Tencent. 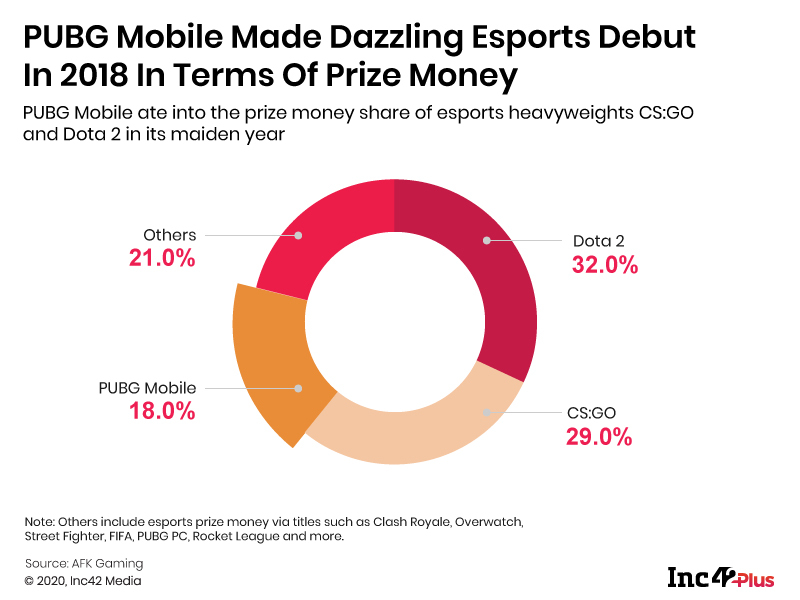 PUBG Mobile’s popularity grew so much that it almost became synonymous with the mobile gaming category in India. India is one of the biggest markets for PUBG Mobile with over 50 Mn players exclusively from India in 2019. 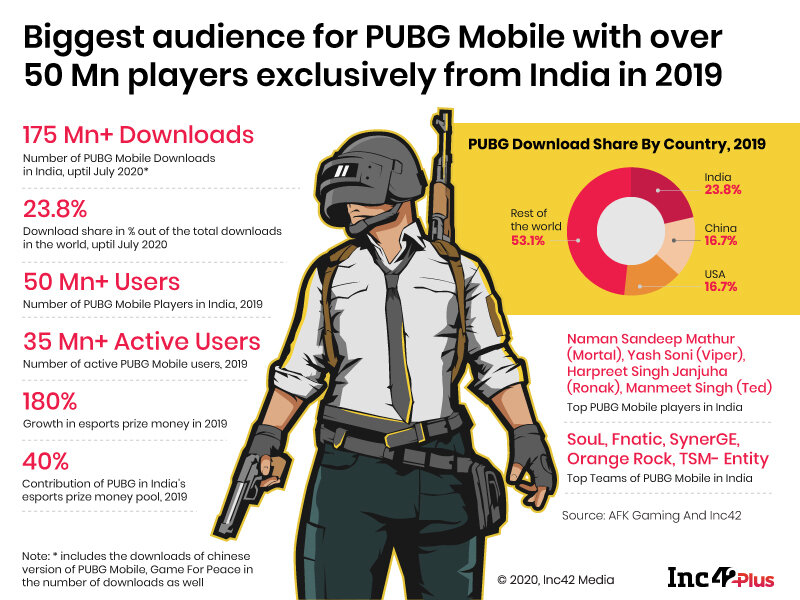 A year after the launch of PUBG Mobile in India, it started clocking average monthly revenue of $7 Mn-$8 Mn every month from May 2019 in India. The primary source of revenue included in-app purchases for cosmetic upgrades such as weapon skins and outfits, but it also included subscription-based revenue (with monthly rewards and exclusives) from some of the high-engaged users.

It’s safe to say that before PUBG Mobile, Indian esports was confined to the highly niche and affluent set of users. India was not among the key destinations for major esports tournaments and those Indians that did compete in global esports tournaments needed huge sponsorship and backing.

In terms of mainstream esports presence, the biggest development was in 2016 when Nodwin Gaming brought the Electronics Sports League or ESL to India. This was followed by DreamHack in 2018, the first time this major international esports tournament was held in Asia. Since then DreamHack has returned every year and has been held in many other Indian cities too.

But since 2018, PUBG Mobile has been the premiere draw for esports enthusiasts. Esports startups such as Nodwin Gaming Ewar Games, Gaming Monk and others have capitalised on this wave too. The first PUBG Mobile tournament in India, “PUBG Mobile Campus Championship 2018”, received an overwhelming response with over 2 Lakh registrations. Since then, there have been several similarly large tournaments with the most recent being the PUBG Mobile India Series 2020 which offered INR 50 Lakh as total prize money and was held in July 2020.

There has been a whopping 180% growth in the esports prize money pool in 2019 from 2018, which can be attributed to PUBG Mobile tournaments. According to Esports Observer, PUBG Mobile contributed 40% to the overall esports prize money pool in India including the ESL Mumbai tournament as well. According to a SEMRush study, around 22 Lakh monthly active gamers in India played PUBG Mobile in May 2020 and it became the highest grossing game worldwide in the same month.

Even as speculation about PUBG Mobile’s fate in India grew after the first wave of bans on June 29, 2020, the game continued to grow bigger in India. In late August, PUBG Mobile made an announcement on Twitter about a new map being released on September 8, 2020. But little did the company know at the time that it would be banned in under a week.

Right after the ban was announced, plenty of gaming enthusiasts took to Twitter and other social media platforms to express their dismay, share memes and laughs and also play their last matches on PUBG Mobile.

While few of the top PUBG Mobile streamers might readily find an audience in other games, those who had made a career or living out of playing and streaming PUBG Mobile will have to look for alternatives. Popular PUBG Mobile streamer Naman ‘Mortal’ Mathur, who has around 6.11 Mn subscribers on his YouTube channel, tweeted saying he was looking forward to playing other games after the PUBG ban. 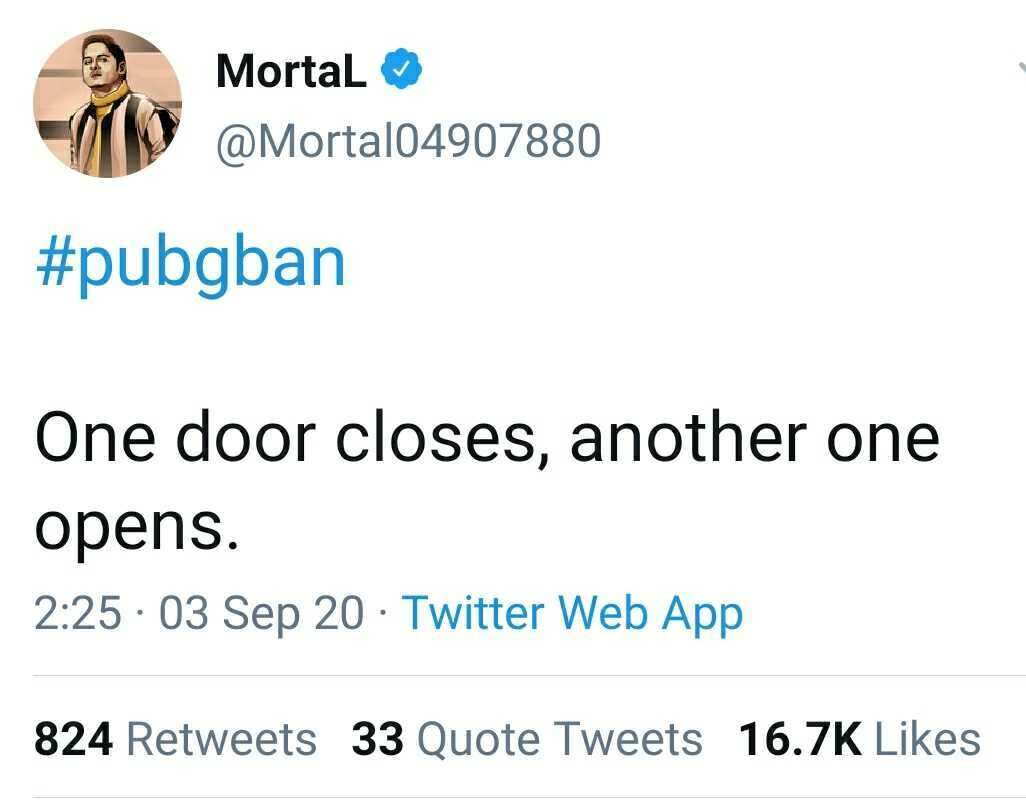 But the bigger question from the point of view of the market is whether the ban will impact revenue prospects and growth of esports in india. According to the latest Inc42 Plus report — Esports In India: Market Landscape Report, 2020 — esports accounted for around 4% of all online gaming users and 9.13% of aggregated revenue, out of the overall online gaming market in FY2020.

So clearly, the segment is at a nascent stage in India and while the overall growth in the past few months has been very favourable for its future, the ban on PUBG Mobile could set back the market as it will destabilise the casual audiences and force them to look at other options or altogether forego their interest in battle royale games.

However, experts in the industry are optimistic that a ban on the most popular esports title will not derail the growth of the entire sector. Parth Chadha, founder and CEO of EWar Games, said in a press statement, “It’s the community that shapes the future of the industry, not the game. But, we all must agree to the fact that PUBG mobile has done a phenomenal job at introducing millions of Indians to Esports. There are over 35M active PubG players in India among which approx 15M are the daily players.”

Other founders and gaming startups said that the ban makes room for other games and genres. “Games such as Call of Duty (COD) Mobile, Free Fire and Fortnite may see a surge in users in India. While we may see some players move to other platforms such as PUBG PC, the majority who prefer the mobile version will be sticking to similar games on the same platform which would be COD Mobile.” Yash Pariani, CEO of Indian Gaming League (IGL), said.

The ban on the PUBG Mobile leaves a large number of player base, esports community and the ecosystem developed around it, with many players making their living out of this game at stake.

“The most unfortunate outcome of this sudden move is that it now leaves thousands of players, and hundreds of organisers, journalists, broadcasters with an uncertain future as PUBG esports was indirectly responsible for their jobs. With PUBG Mobile’s uncertain future, it also paves the way for its competitors to step in and fill the void,” Ishaan Arya, cofounder of online gaming community The Esports Club, said.

The future seems to be uncertain for Indian esports community since there are a lot of questions which are unanswered, and who knows whether PUBG Mobile will make a return to the Indian market. But the ban has definitely created a huge void in the Indian gaming market and where there’s a void, a vibrant startup ecosystem such as India’s will usually find an opportunity. The real test will be to latch on to this opportunity and create a long-term connect that can rival PUBG Mobile.