The SoftBank Conspiracy: Who Is Conspiring Against Group’s Ex-President Nikesh Arora And Its Current CSO Alok Sama? 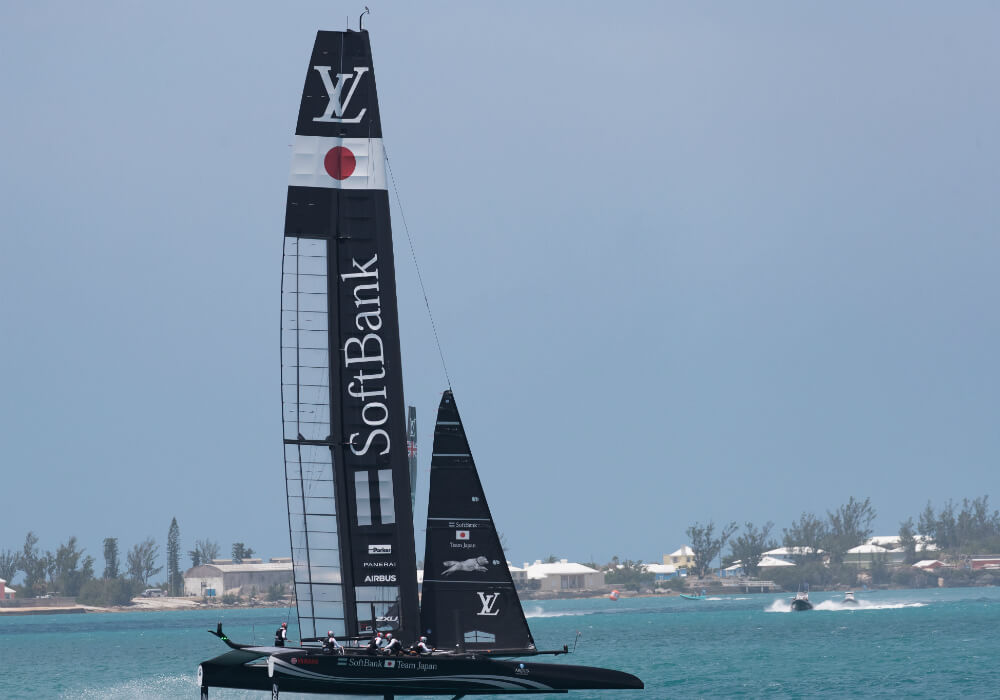 With Further Investigation, SoftBank Wants To Close The Boardroom Brawls Once And For All

One of the most dominant stakeholders of the startup ecosystem globally, SoftBank has been facing what appears to be an in-house war and campaign for the promotion and demotion of favourites and disliked ones in the SoftBank Group board.

Amid news over how Kremlin, Russia campaigned to support Trump’s presidency and how Cambridge Analytica misused Facebook data and ran campaigns, the binoculars now seems to be focussing on other countries and how the data can be manipulated to sway people’s mind in favour of certain candidates in India, Ghana, Kenya, Brazil and many other countries. SoftBank has now appointed a special committee to investigate the smear campaign against its former President Nikesh Arora and current Chief Strategy Officer Alok Sama.

Confirming the development, a SoftBank spokesperson stated that a special committee of the SoftBank Group board of Directors is investigating these matters. While the SoftBank board has already thoroughly investigated claims against Nikesh Arora and Alok Sama and found them to be baseless, it will now investigate the sources of unsubstantiated attacks on SoftBank and its executives and remain committed to protecting the interests and reputation of SoftBank.

According to an investigative story by WSJ, the campaign, which involved public shareholder letters, complaints with the US SEC and media leaks targeted Nikesh Arora, a one-time heir apparent to SoftBank Chief Executive Masayoshi Son, and Alok Sama, the company’s current chief strategy officer. The purported campaign that lasted from 2015 to 2017 had its India connections as well.

By late 2011, SoftBank had invested some $200 Mn directly in an ad network startup InMobi and it remained so, as a solo investment for the next 2-3 years. However, in 2015, once Nikesh Arora, a former Google Executive came on board, SoftBank’s investments in India grew by manifolds to $2 Bn. As a deal cracker, he led investments of worth $627 Mn in Snapdeal and $210 Mn in a cab-hailing service Ola. He extended the company’s portfolio to four more companies: Housing.com, budget-stay aggregator OYO and on-demand grocery delivery service Grofers. 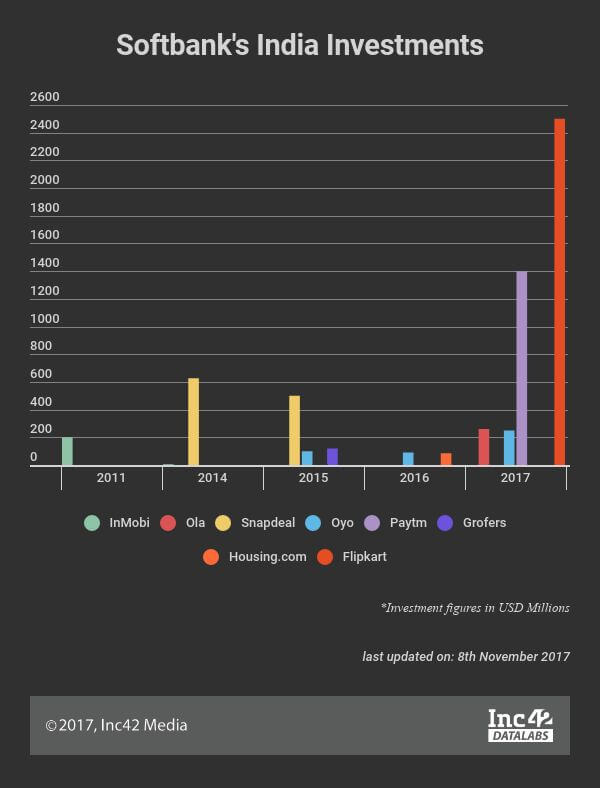 After Nikesh took charge of SoftBank, the Group that was so far concentrating mostly on big investments such as buying Vodafone Japan at $15 bn or Sprint at $20 Bn witnessed a sudden shift in investments in terms of markets and verticals.

As SoftBank’s President, Nikesh also became one of the world’s highest-paid executives.

In spite of all the criticism, Masayoshi Son appeared to be on the same page with Nikesh in exploring new markets and verticals such as those that are existing in India. However, someone else in the board apparently was either not on the same page or saw a mischievous opportunity in this design of thinking.

The same WSJ report claims that Alessandro Benedetti, an Italian investor and CEO of Italy-based SAE Capital – the mastermind behind the campaign – started convincing other board members that it was a great mistake and risk to invest in the Indian market. By then, there were also some media-leaks pertaining to Nikesh’s personal finances.

As per the report, insiders of the campaign informed that Alessandro was, in fact, working to make way for another SoftBank Insider.

Nikesh was perhaps ahead of his time, and his decisions pertaining to the India investments didn’t go well, at least in the short term.

As part of Nikesh’s India drive, except InMobi, other investments turned risky. Coupled with that, the letters from the shareholder and demand to oust him then triggered Nikesh to quit the post of SoftBank President. SoftBank, in fact, set an internal inquiry against both Arora and Sama, which later gave a clean chit to both the men.  An anonymous complaint was also filed with India’s Enforcement Directorate. However, the Indian ED didn’t take the matter further.

The India investments getting murkier wasn’t the only headache for Nikesh. In 2015, Benedetti had also hired the London office of K2 Intelligence LLC to investigate Nikesh Arora’s involvements in sourced investments in Geek telecom TIM Hellas, escalating the matter further.

Both Nikesh and Alok have claimed that they have been victims of someone’s vicious campaigns. Not much later, Rajeev Misra who was introduced in the SoftBank Head of Strategic Finance in 2014 rose to head the SoftBank-led $100 Bn Vision Fund.

Son after taking back the steering into his hands actually didn’t write off Nikesh’s investment plans but bolstered them. SoftBank’s India investment has gone over to $6 Bn now, this includes the mega-investments of $1.4 Bn in Paytm and $2.5 Bn in Flipkart. Son has also promised to invest $6.5 Bn more in the next few years.

SoftBank is fighting on several fronts. While SoftBank’s Sprint merger with T Mobile in the US and Snapdeal’s merger with Flipkart in India fell apart; Flipkart, Paytm, and Ola along with Nvidia are a few investments where SoftBank is aggressively counting on.

Interestingly, barring Nvidia, these are the same companies locked by the former President of SoftBank Nikesh Arora for investments. However, they invited a huge criticism from SoftBank board back then. The recent failed multi-billion deals, despite Son’s best efforts, have put a question mark on Masayoshi Son’s reputed deal maker image.

Amid rising bank debts, SoftBank’s net profit has also plunged down by 87% for April-September 2017. However, the company managed to register 21% growth in operating profit owing to the Sprint-T Mobile merger talks. “Interest payments for the year ended March 2017 topped $4.1 Bn, up sevenfold in four years. That figure was one-fifth of debt-servicing costs for all of Japan’s listed companies combined, putting the company head and shoulders above second and third-place,” wrote Japan’s leading daily Nikkei Asia.

At a time when it is also reportedly in the process of selling a major chunk of Flipkart shares to global retail giant Walmart, enriching its presence in China and relisting ARM Holdings, SoftBank understandably wants to ensure that the Boardroom environment is aligned in the same direction.

Further, Sama and Arora both have been repeatedly suspected of a foul play against them. In such a scenario when SoftBank’s internal investigation has already given a clean chit to these gentlemen, for Son, it is time to take upon himself the task of investigating what has been alleged against the duo.

This will also clear the speculated role of Rajeev Misra in this alleged smear campaign if there is any, which his lawyers have already termed null and void. The investigation is expected to highlight the ongoing fight between Misra and Sama.

It is worth noting that Sama has been prevented to further work for Vision Fund which is being headed by Rajeev Misra.

Unsurprisingly, thus, the investigation has been welcomed by Sama. His lawyer stated,  “We’re glad that the SoftBank Board has appointed a special investigative committee and hope that those involved in this nefarious scheme will be held fully accountable.”

Taking a queue from boardroom brawls at Tata, Birla and the Reliance in India to Procter & Gamble and General Electric, globally, Masayoshi Son wants to, therefore, avoid any possible future boardroom coup.