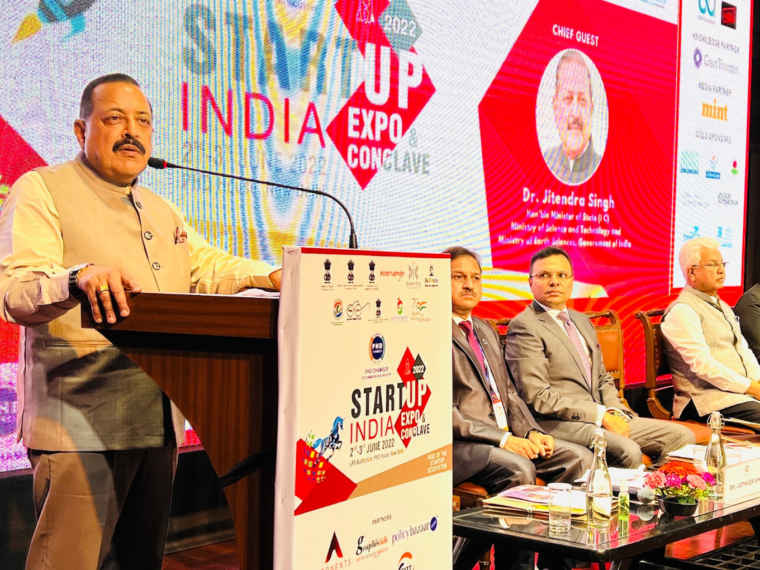 The startups of the country will determine not only the future economy of the country but will also act as a key pillar for the world economy: Jitendra Singh

Singh asked the corporates to become a part of the startup movement and become equal stakeholders in the startup ecosystem.

The startups of the country will determine not only the future economy of the country but will also act as a key pillar for the world economy, Union Minister of State for Science and Technology Jitendra Singh said on Thursday.

Singh said that the number of startups in the country have grown to about 70,000 from 300-400 in 2014, and credited the government’s ‘Startup India, Stand Up India’ initiative for it.

He was speaking at the Startup India – 2022 Expo and Conclave. The minister said that the Modi-led government has been nurturing the startup ecosystem since 2016.

“Today, we have risen to be the third-largest startup ecosystem in the world in just five-six years which is not a very big time,” he said. Speaking about India’s 100 unicorns, he said that the country’s unicorns have a higher average growth rate than the likes of the US, UK, Germany and others.

He asked the corporates to become a part of the startup movement and become equal stakeholders in the startup ecosystem.

Singh also urged entrepreneurs to focus on the unexplored farm and dairy sectors of the country.

At the same event, Union Minister of State for Commerce and Industry Anupriya Patel said that the Indian startups are creating history and have surprised the entire world in a short span of time.

“We have startups not just in the cosmopolitan cities, but more than 50% of them are today to be found in tier 2 and tier 3 cities and we have to expand this and the government is leaving no stone unturned,” Patel added.

The Centre and state governments are taking various measures and initiatives to shore up startups. The Centre has launched various initiatives like Venture Capital Scheme, Stand Up India, Single Point Registration Scheme, and Extra Mural Research Funding for startups.

On the other hand, many state governments have come out with dedicated startup policies. Recently, the Telangana government announced that it will be launching the second phase of incubator T-Hub to boost the growth of startups in the region.

In May, the Arunachal Pradesh government also came out with a startup policy to support at least 250 startups.

During the same month, the Delhi government announced the Delhi Startup Policy to facilitate entrepreneurship in the state. Meanwhile, PM Narendra Modi launched the Madhya Pradesh Startup Policy and a state-run VC fund for startups.

In April, the Tamil Nadu government boosted its startup policy with an aim to have a minimum of 10K startups by 2026.