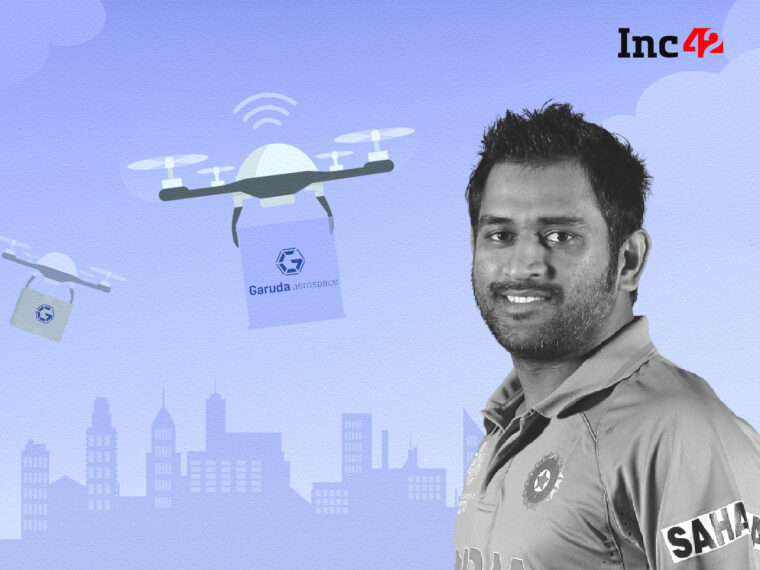 Founded in 2015 by Jayaprakash, Garuda Aerospace is a drone-as-a-service (DaaS) startup

Garuda Aerospace has recently received orders for around 8,000 drones from multiple countries

Cricketer Mahendra Singh Dhoni has invested an undisclosed amount in the Chennai-based drone startup Garuda Aerospace, thereby joining the startup’s cap table as a stakeholder. He has also joined the startup as a brand ambassador.

Founded in 2015 by Jayaprakash, Garuda Aerospace is a drone-as-a-service (DaaS) startup. The startup designs, manufactures and customises drones for various use cases such as deliveries, disaster management and agricultural applications, among others.

“I’m happy to be a part of Garuda Aerospace and look forward to witnessing their growth story with the unique drone solutions they have to offer,” MS Dhoni said.

Agnishwar Jayaprakash, founder and CEO of Garuda Aerospace, said, “I’ve always been an ardent admirer of Mahi Bhai & to have him as a part of the Garuda Aerospace family is honestly a dream come true.”

He added, “Mahi Bhai is the epitome of Dedication & I firmly believe that having Captain Cool on our Cap table adds tremendous value which will motivate our team to perform better.”

According to its website, Garuda Aerospace is engaged with several government agencies such as the Survey of India, the National Highways Authority of India (NHAI), and the Indian Oil Corporation, among others, in long-term projects.

Recently, Garuda Aerospace received orders for around 8,000 drones from multiple countries, including Malaysia, Panama, and UAE. Garuda has also set a target of making 100K drones over the next two years.

Indian drone startups are also witnessing interesting deals and acquisitions lately. A relevant example is Adani Enterprises buying a 50% stake in drone startup General Aeronautics a little more than a week back.

The government too has recently introduced several changes to the drone regulations to make it easier to establish a drone startup, with the aim of becoming a world leader in drones by 2030.

Garuda Aerospace has joined a growing list of startups that have cricketers at their cap tables and as brand ambassadors.

Recently, KL Rahul invested an undisclosed amount in loungewear brand XYXX, also joining the brand as an ambassador. KL Rahul is not the only active cricketer that has invested in startups, however.

Virat Kohli is one of the most prolific investors in Indian startups. The Indian cricket captain has a portfolio that counts Digit Insurance and MPL, two of India’s 100 unicorns, along with several startups such as Rage Coffee, Blue Tribe, Hyperice, Universal Sportsbiz, Chisel, and Sports Convo.

Garuda is not Mahi’s first startup investment either. The seasoned cricketer is an investor in the cars marketplace unicorn Cars24, Khatabook, HomeLane, and 7InkBrews, among others.

Sachin Tendulkar has also backed several Indian startups, including the likes of edtech unicorn Unacademy and used cars marketplace Spinny, among others.