While the news regarding Facebook data leak with Cambridge Analytica is still boiling all around, in another news revelation, WhatsApp – freeware messaging and VoIP service by Facebook –  is now being accused of sharing its payments-related data with Facebook and other third-party apps.

As per the WhatsApp payments privacy policy, “We share information with third-party providers and services to help us operate and improve Payments… To send payment instructions to PSPs (payment service providers), maintain your transaction history, provide customer support, and keep our Services safe and secure, including to detect, prevent, or otherwise address fraud, safety, security, abuse, or other misconduct, we share information we collect under this Payments Privacy Policy with third-party service providers including Facebook,” 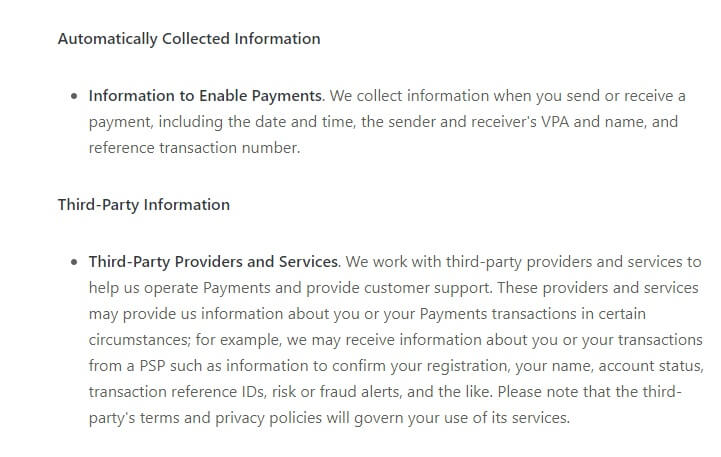 However, it also goes on to say,

“To provide Payments to you, we share information with third-party services including PSPs, such as your mobile phone number, registration information, device identifiers, VPAs (virtual payments addresses), the sender’s UPI PIN, and payment amount.”

Sharing info with the PSPs is understandable; but, with Facebook? Does Mark Zuckerberg have any explanation or just wants to get away by issuing another apology?

Out of 1.5 Bn global users, WhatsApp has 200 Mn users in India. While the company’s UPI-enabled payments solution is currently limited to a user base of 1 Mn, as part of a pilot project, the company has already planned to open it to every Indian user. This might alarm another trust breach by Facebook, as most of the users aren’t aware of such terms and conditions.

Not very long ago, the UIDAI – taking a stringent action – had suspended Airtel from conducting Aadhaar-enabled payments solution for its Airtel Payments Bank division.

Like Truecaller, WhatsApp provides a peer-to-peer payments solution creating a VPA in partnership with various banks such as the ICICI and Axis. However, the virtual address as appears does contain the users’ mobile number.

Evading the Login and password essentiality to make UPI-enabled payments, WhatsApp has also thus skipped the 2-step authentication in the name of making the payments easy.  In a tweet that invoked Facebook’s unsuccessful tryst of colonising the Internet with Free Basics, Vijay Shekhar Sharma which has already reached the NPCI alleging the organisation’s preferential service to WhatsApp, accused Facebook of trying the same trick again by killing the open UPI system with closed implementation through the payment feature on WhatsApp.

Jan and Brian, co-founders of WhatsApp who are now campaigning #deleteFacebook share the core idea behind WhatsApp, “The idea is simple: when you send a message, the only person who can read it is the person or group chat that you send that message to. No one can see inside that message. Not cybercriminals. Not hackers. Not oppressive regimes. Not even us. End-to-end encryption helps make communication via WhatsApp private – sort of like a face-to-face conversation.”

However, once it became a part of the Facebook family, it appears that data leak and trust breach issues are inevitable.

The Facebook-owned WhatsApp existing policy states that the data which includes fetching a user’s name, number, transaction, date and time are collected so as to review user’s account activity to determine whether the user continues to meet our Terms and Payments Terms.

Interestingly, WhatsApp apparently does that by breaching the NPCI guidelines on users’ data privacy.

And, as stated, the data is shared with Facebook too. Facebook, the social media platform, has already all the other details of its users which include family details, places a user goes to, etc. With transaction details, Facebook has just taken its surveillance capability to another level.

While WhatsApp has apparently stated that it might follow the NPCI guidelines once it will roll out the payments solution for all the 200 Mn Indian users. However, does that justify, playing with the existing 1 Mn users, who have already subscribed to the payments solutions?

While Mark has already apologised for allowing third parties to lift data from Facebook without users consent, Zuckerberg’s data ravenousness can also be understood by the fact that he had also planned to access all hospital records’ matching health data along with user’s profiles. After Cambridge and direct or indirect Russian involvement in the US presidential election, Mark Zuckerberg has put the health data mining of each profile user on hold.

A German court has already ruled that Facebook has violated the country’s data protection law by insisting users provide their real names and their location, etc.

WhatsApp which is aimed to be a freemium service in India has completely turned itself into a freeware platform. The question is how? By mudding with people’s data?