Paytm Vs WhatsApp: Is Paytm Justified In Accusing WhatsApp Of Unfair Play In Digital Payments?

Paytm Vs WhatsApp: Is Paytm Justified In Accusing WhatsApp Of Unfair Play In Digital Payments? 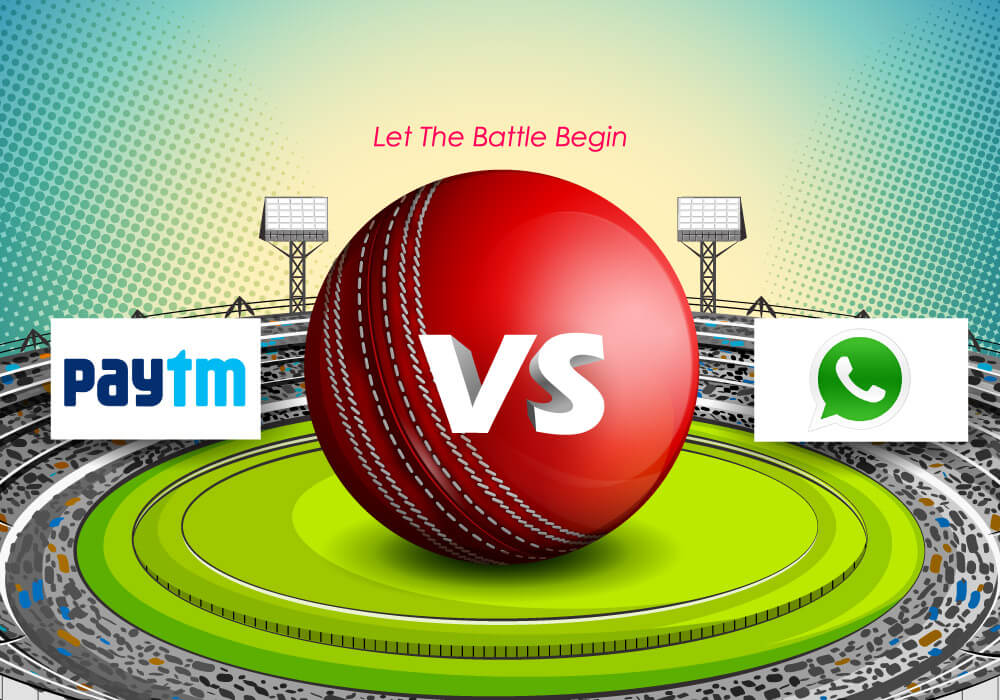 While this week was allegedly the week of love given 14th February was Valentine’s Day, but it turned out to be a week of war among India’s digital payment players. It all started with Vijay Shekhar Sharma, CEO of Paytm, accusing Facebook-owned WhatsApp of trying to enter the nation’s digital payments market through unfair means by flouting NPCI rules on UPI and deliberately restricting the service to its own 200 Mn users.

In a tweet that invoked Facebook’s unsuccessful tryst of colonising the Internet with Free Basics (which too Vijay Shekhar Sharma had opposed tooth and nail), he accused Facebook of trying the same trick again by killing the open UPI system with closed implementation through the payment feature of WhatsApp.

Consequently Vijay Shekhar Sharma will also be petitioning the National Payments Corporation of India (NPCI), which has developed the UPI system, and even higher authorities to highlight this issue and to seek redressal of what he termed as an unfair playing field accorded to WhatsApp, which has begun testing its UPI based payment service in the country in the first week of this month.

Also, in the aftermath of the brewing war between Paytm and WhatsApp, WhatsApp’s Vice-President Neeraj Arora stepped down from the board of Paytm, a position which he had held since 2015. The move is believed to be caused due to the ongoing conflict of interest and cold war, though none of the parties have commented on the same.

Why Is Paytm Crying Foul Over WhatsApp’s Payment Feature?

It is a different story that WhatsApp boasts a monthly user base of 200 Mn in India and its entry into the country’s digital payment space by proving what could be the most seamless payments feature is a major threat to dominating player Paytm.

But Paytm and Sharma’s concerns are not about the competition but the unfair advantage which has somehow been offered by NPCI to WhatsApp and the security concerns associated with it.

For instance, WhatsApp trial service does not require a login session and Aadhaar-based payments. Sharma believes that a lack of a login makes WhatsApp payments a security risk, akin to giving an “open ATM” to everyone.

“All UPI Apps need to have an app password, to give an option to reset password or logout to the user. But there’s no concept of password or logout in WhatsApp. It will eventually allow anyone to send money with a single factor of authentication.”

Additionally, the spirit of interoperability has not been adhered to. As per Deepak, WhatsApp has also refuted the UPI mandate by not allowing customers to pay using bank account plus IFSC or Aadhaar number and not issuing UPI QRs. Other mandated features like ‘scan and pay using QR’ or ‘request payments’ features are missing in WhatsApp, which means that a Paytm user cannot request money to a WhatsApp user. This effectively implies that WhatsApp is trying to create a walled garden by restricting the service to its own users and thus monopolising on the back of its dominant position.

Deepak further adds that the BHIM-UPI branding isn’t used anywhere in WhatsApp while all Bank Apps have to necessarily comply with the mandate and make it visible.

The Facebook-owned service is using the phone number as the VPA instead of cumbersome addresses such as [email protected] as Google’s Tez app and other payment services do.

More so, in a beta stage, customers have to enrol for the service whereas, in the case of WhatsApp, it is being rolled out to just everybody on the platform. This Paytm believes is a case of clear arm-twisting by deep-pocketed WhatsApp to get a favourable policy change in its kitty.

The March Of WhatsApp And The Digital Payments Boom In India

While Paytm is considering taking its concerns to the NPCI, not everyone shares its concerns. Digital payments players like MobiKwik, PayU, and FreeCharge have taken digs at Paytm crying foul over being threatened unlike at the time of Free Basics when Indian Internet entrepreneurs rallied behind the cause.

Kunal Shah, former CEO Freecharge, also tweeted that WhatsApp is being pulled down as it is hard to win on merit against network effects of WhatsApp.

Paytm meanwhile believes that those opposing it are smaller players and missing the point. Vijay Sharma stated, “This is not about Indian companies versus international companies. India is an open Internet economy that welcomes every company that plays fair.”

However, people close to NPCI have said that WhatsApp will implement all the required features when it goes live for its entire consumer base, which is expected by the end of March.

As per an unidentified industry executive, while NPCI has advised UPI apps to have login sessions, it is not compulsory. Even apps that use UPI, like Ola and Uber, don’t have login sessions. However, WhatsApp has a session management in its app which needs to be customised to UPI guidelines.

“Paytm’s concern is that once WhatsApp payments become very popular, people will start sending money from WhatsApp to WhatsApp. Which is what’s their biggest worry and that’s they are calling it as a closed garden. But as far as a user is concerned, it should have no concerns about interoperability. Because on WhatsApp, you can actually add your Paytm bank account as Paytm is also a bank on the UPI system.”

He added that WhatsApp allows a user to add multiple bank accounts and while sending money one can choose which bank account one wants to send the money from. Nikhil also has debunked myths about the security aspect of WhatsApp payments and states that it prescribes to the two-factor authentication guidelines set by NPCI.

While WhatsApp has still not publicly commented on the issue and is hard to say what the final features will be as it is still in beta, is Paytm’s concern something to do with the fact that WhatsApp’s payment service has the most simplified user interface compared to all other payment apps in India? Is this simplicity which could woo millions to the platform easily that is making Paytm jittery?

Amitabh Kant, CEO of Niti Aayog, had tweeted the same thing about WhatsApp’s seamless experience a few days back. 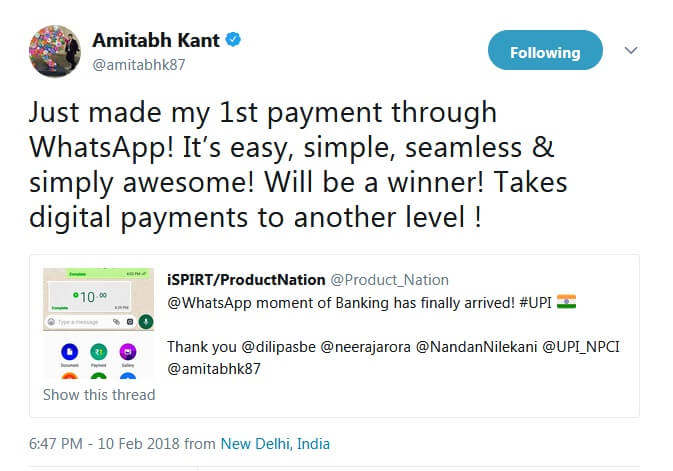 It is to be remembered here that while WhatsApp was readying itself to enter the digital payments space since last year, Paytm was busy transforming itself into a messaging platform by launching its instant messaging service, Paytm Inbox.

WeChat, the service that Paytm Inbox is modelled after, is a popular in-app chat service in China and is another Tencent-backed company. WeChat’s mobile payment service, WeChat Pay is the primary payment method for offline purchases in China, with 93% adoption rate across tier I and tier II cities.

Interestingly, both WhatsApp and Paytm are now in the race to emulate WeChat’s successful in-app chat service and payments model. And there is no doubt about the fact that WhatsApp wins hands down when it comes to its popularity as a chat platform. Hence it is anyone’s guess that winning the payments war with its simplistic interface will not be much of a struggle.

How far that interface will be tweaked when the final version is launched as per NPCI guidelines is what everyone is watching now with interest. How far will Vijay Shekhar Sharma and Paytm be able to make sure that WhatsApp is not allowed to get away with any undue advantage as far as adhering to all UPI guidelines is concerned, will unfold in the coming few weeks.

But as per many like Amrish Rau, India head of global payments firm PayU, WhatsApp will adhere to the guidelines of UPI. Amrish tweeted the following on the same:

But one thing is clear. With WhatsApp unleashing its payment service, the digital payment wars will get murkier and messier. India’s digital payments industry, which is currently worth around $200 Bn, is expected to grow five-fold to reach $1 Tn by 2023, a report by Swiss financial services holding company Credit Suisse predicts.

Paytm may or may not accept it, but the digital payments market would receive a major boost, especially since the instant messaging app has more than 200 Mn monthly active users in the country. And while competition for Paytm will undoubtedly rise and will also make a dent in its growth, in the end, it’s the consumer who stands to win through a great product/ user experience in digital payments – be it through Paytm or through WhatsApp.

NPCI came out with a statement pertaining to WhatsApp BHIM UPI beta launch. It said:

National Payments Corporation of India (NPCI) has been working to facilitate digital payments in the country with globally recognised products like Bharat Interface for Money BHIM – Unified Payments Interface (BHIM UPI). We follow well-defined guidelines for BHIM UPI services with the objective of making our platforms interoperable and based on open standards, convenient and secure, offering multiple choices to consumers for rapid adoption for digital payments through banks and payment ecosystem players.

Currently, NPCI has given its consent to roll out WhatsApp BHIM UPI beta launch with limited user base of 1 Mn and low per transaction limit. Four banks will join the multi-bank BHIM UPI model in phases (in the coming weeks) and full feature product shall be released after the beta test is successful. Multi-bank model offer advantages such as transaction load distribution between banks and helps to integrate popular apps easily with BHIM UPI.

Broad principles for interoperability like a) ability to send and receive money through any BHIM UPI ID b) intent and collect call and c) read and generate BHIM / Bharat QR code are required in final BHIM UPI app. BHIM UPI enabled app which fulfils such principles only will be permissible for full scale public launch.

We work towards providing seamless experience to users of BHIM UPI platform and recognise the contribution of member banks and non-bank entities to reach to this level.

In response to the NPCI statement, a Paytm spokesperson said, “We welcome this statement by NPCI. It addresses the concerns of interoperability violation that we had raised. It also clarifies  that the trial has been restricted to 1 million users, though we feel that a product with the stated violations could have been tried out amongst a much smaller base. We are still concerned that this statement is silent on the critical issue of safety/security of a financial transaction through UPI, where consumers need to mandatorily sign-in with username and password. This violation is fundamental and very serious. WhatsApp must implement login and password like all other BHIM UPI apps. This statement is also silent on other issues such as the requirement to send SMS notifications for every UPI transaction. We hope that future rollout will be fully compliant with all the guidelines. We wait to hear NPCI views on some of these missing aspects.”