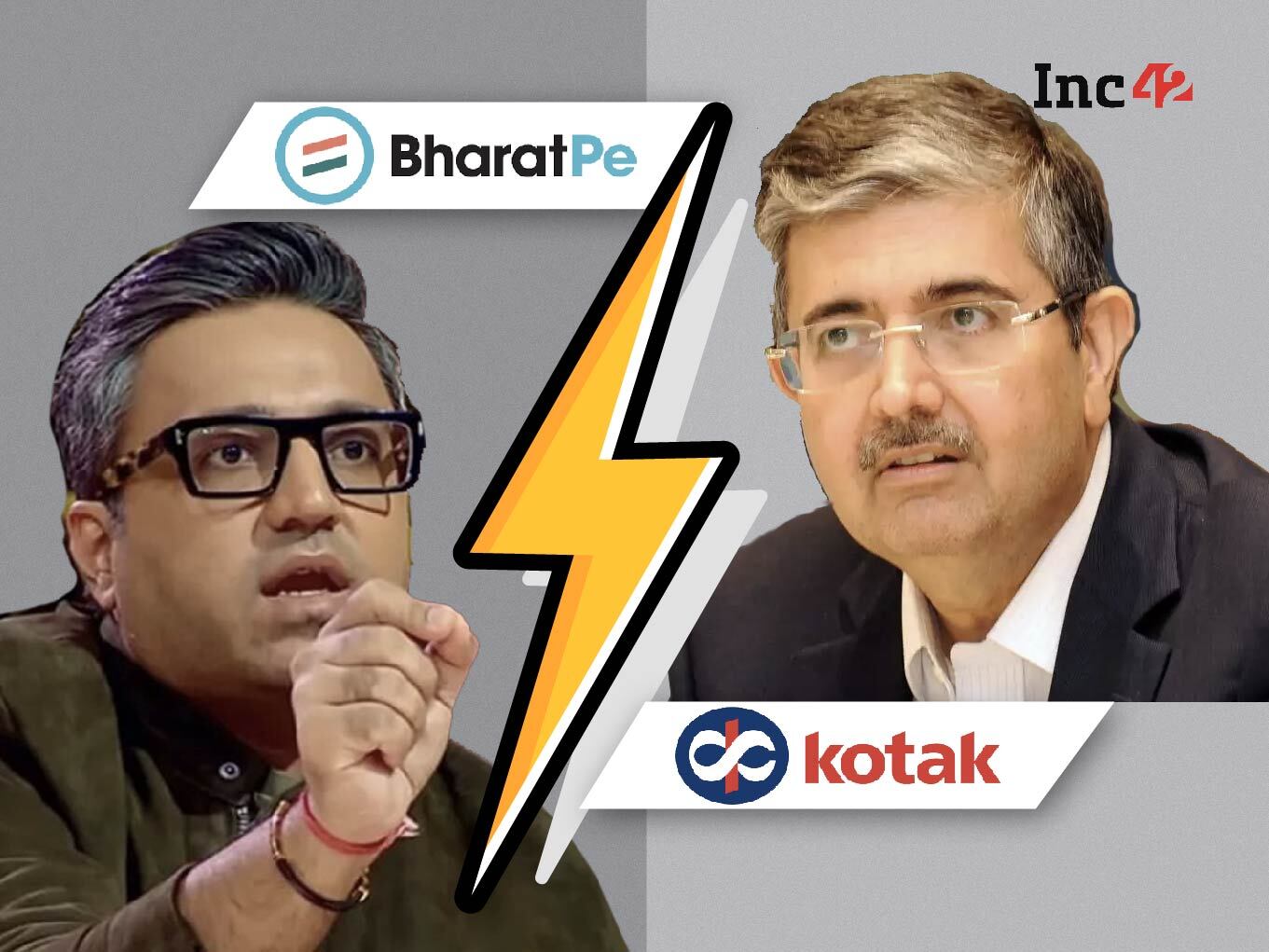 In its reply, Kotak has placed on record its objections to inappropriate language used by Ashneer Grover, which was heard in a leaked audio clip dismissed as fake by Grover

The refusal to provide financing constitutes a blatant violation of Kotak’s legal obligations to the Grovers as their wealth managers, the legal notice claims

It’s easy to be swept up by the frenzy around tech IPOs and the potential to gain big from high-profile listings. Despite the mixed performance of some tech IPOs last year, India’s biggest investors showed great appetite for tech stocks. But not all were able to make the most of the big listings for Nykaa, Zomato and others.

As per reports, Ashneer Grover, cofounder and managing director of fintech unicorn BharatPe and a noted angel investor, has sent a legal notice to Kotak Mahindra Bank accusing the bank of failing to secure financing and allocation of shares in the hugely successful Nykaa IPO.

Grover and his wife Madhuri Grover are seeking damages for Kotak Mahindra Bank’s inability to provide financing worth INR 500 Cr to subscribe to shares in the Nykaa IPO.

The legal notice has surfaced a week after a leaked audio clip in which Ashneer Grover is heard hurling abuses and threats. The clip was earlier dismissed as fake by Grover, but Kotak Mahindra Bank’s response seemingly authenticates it.

The couple is seeking damages for the potential gains they would have made from the Nykaa IPO had they been able to invest the INR 500 Cr. Besides this, the duo are seeking INR 1 Lakh towards the cost of the legal notice, according to the report. Inc42 has not independently verified the contents of the legal notice.

While not all tech IPOs saw gains on listings, some such as Nykaa and Zomato did see big listing pops. The Grovers had reportedly invested INR 100 Cr each in the Zomato and CarTrade listings.

Nykaa got listed on November 10, 2021, a few days after the legal notice was sent to Kotak Mahindra Bank. Nykaa witnessed a bumper listing with a premium of nearly 80% upon being listed for trading. It touched a high of INR 2,129 on the opening day, which is a premium of nearly 90% over the issue price.

An investment of INR 500 Cr would have seen a gain of INR 446 Cr as per our calculations based on this peak. The stock is currently trading at INR 2,005.70, which is still 78% higher than the IPO issue price.

Responding to the legal notice, Kotak Mahindra Bank said that it has sent a reply to the Grovers. “This notice was received by us and was replied to appropriately at the time, including placing on record our objections to inappropriate language used by Mr. Grover,” a statement by Kotak read.

The bank also said that legal action is being pursued. “We would like to confirm that there is no breach or violation by the Kotak Group in any manner whatsoever.” 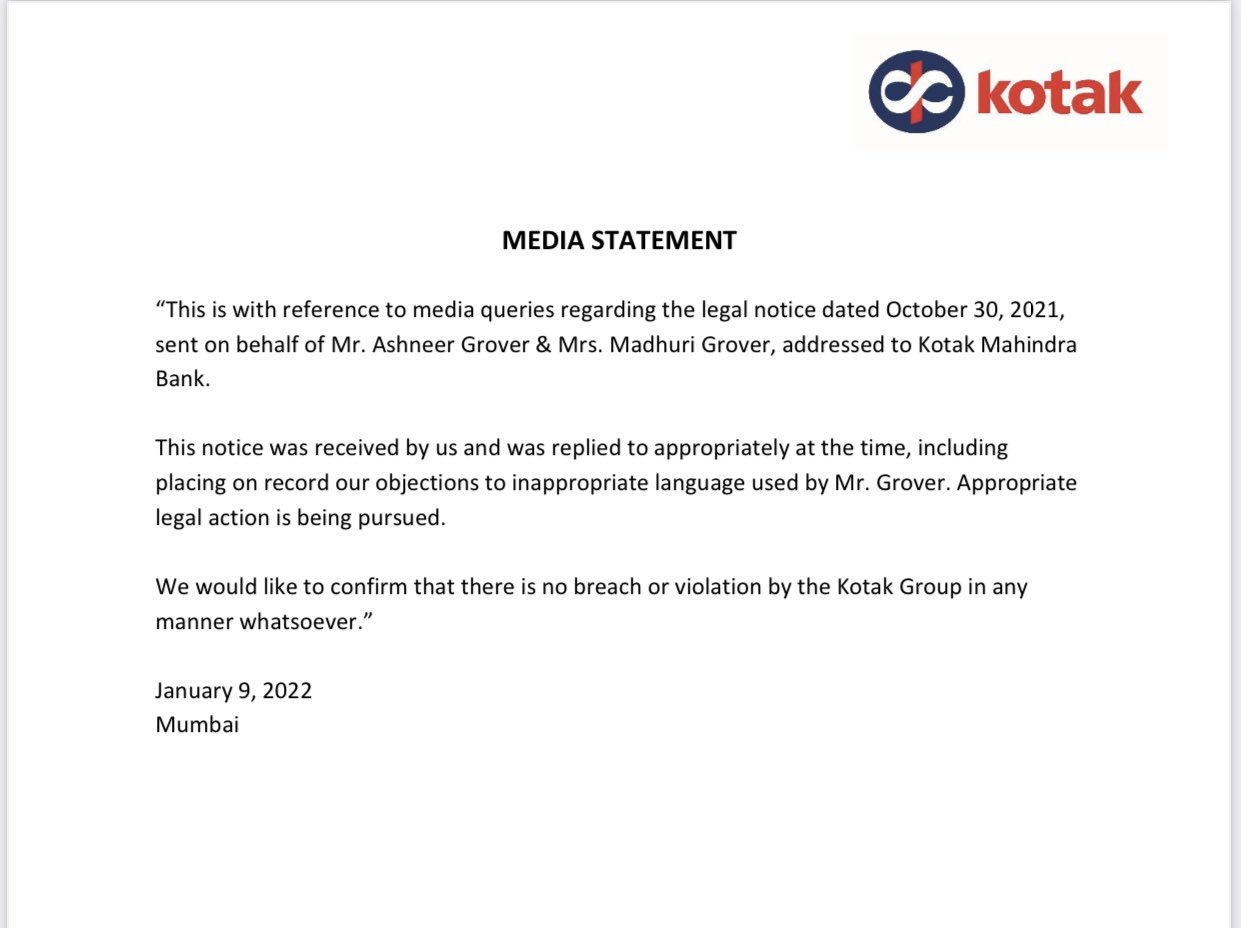 BharatPe and Ashneer Grover declined to comment on the status of the legal notice.

The inappropriate language referred to by the bank is interesting, since it seemingly authenticates a recent leaked audio clip allegedly featuring Ashneer Grover, where the entrepreneur and his wife are heard abusing a supposed Kotak Mahindra Bank employee, and also delivering death threats. The audio clip has now been deleted.

On January 6, the day after the clip was leaked, Grover had claimed that it was a fake and that he had been a target of a scam. He also alleged that prominent Twitter account Unicon Baba was trying to extort money to manage his social media reputation based on the audio clip.

“Folks. Chill. It’s a fake audio by some scamster trying to extort funds (US$ 240K in bitcoins). I refused to buckle. I’ve got more character. And Internet has got enough scamsters,” Grover tweeted, but the tweet itself was deleted soon after, along with the original leaked audio clip.

According to the Grovers, while Kotak had informed them that the Nykaa IPO subscription formalities were done, soon after the financing was declined due to ‘erratic FII movements’ and ‘very high lending rates’.

The refusal to provide financing constitutes a blatant violation of Kotak’s legal obligations to the Grovers as their wealth managers, the legal notice further claims. It also claims that Kotak Mahindra secured financing for other clients for the same IPO despite turning down the Grovers. The bank is said to have given financing to Suhail Sameer, who replaced Grover as CEO of BharatPe last year after it turned unicorn.

The Spotlight On Ashneer Grover

Before starting BharatPe, Grover had been the chief financial officer at Grofers (now Blinkit) besides other roles at banks and a brief stint at PC Jewellers. incidentally, Grover has been associated with Kotak Mahindra for over 15 years. He was the vice president of Kotak’s investment banking division from 2006 to 2013. He is also said to have invested in other IPOs through the bank, including Zomato and CarTrade. Besides this, he is a prominent angel investor with over a dozen startup investments.

It is unclear whether Grover invested in Paytm’s public offering. However, soon after the fintech giant listed in November last year, the BharatPe cofounder had criticised Paytm founder and CEO Vijay Shekhar Sharma’s for pricing the IPO too high. He claimed the IPO benefitted the company’s foreign investors through exits at high returns, rather than the Indian retail and institutional investors.

Besides this, in the past, many have been critical of Grover and BharatPe’s announcement of material perks for some of its employees in 2021 — including BMW superbikes, cutting-edge gadgets and lifestyle products, trips to Dubai and more.

The move ruffled quite a few feathers. Some said that the policy was sexist and others such as Pravin Jadhav, former Paytm Money CEO and currently the founder of Raise Financials, tweeted that such benefits set unrealistic expectations among tech workers.

Grover is one of the more outspoken personalities in the Indian startup ecosystem, and seems to be carrying that persona into his latest role as an investor on the India edition of Shark Tank, which launched in December 2021. In recent weeks, we have seen plenty of memes and comments on social media — Grover’s gruff comments and criticisms of founders who pitch on the show has left many questioning his methods, once again thrusting the entrepreneur into the limelight for the wrong reasons.