Its shares touched a high of INR 2,129 on both BSE and NSE

Its IPO from October 28 to November 1 was subscribed 81.78 times

Nykaa’s market share in the online beauty, personal care space is more than 18.5% 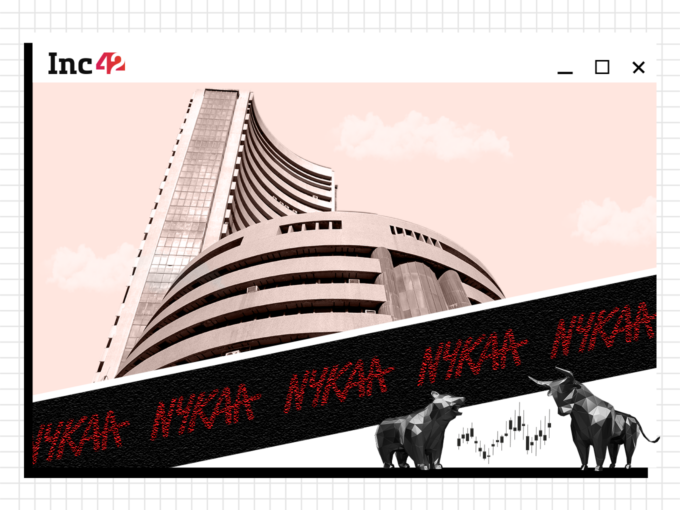 The shares of FSN E-Commerce, the parent company of Nykaa witnessed a bumper listing on Wednesday, as its shares went live on the stock exchanges with a premium of nearly 80%.

It touched a high of INR 2,129 on both the bourses leading its market cap to cross the INR 1 Lakh Cr market minutes after the stocks were listed.

Its market capitalisation has come down to INR 97,099 Cr.

The bumper listing was largely on expected lines after the initial public offering during October 28 – November 1, was subscribed 81.78 times.

QIBs subscribed to the earmarked portion of shares by a massive 91.18 times, and the retail portion was subscribed 12 times.

Before the IPO, the beauty and lifestyle unicorn raised over INR 2,395.84 Cr by allocating nearly 2.13 Cr shares to 174 anchor investors, including Blackrock, Fidelity International, the Government of Singapore and the Monetary Authority of Singapore.

Nykaa’s market share in the online beauty and personal care space is estimated to be more than 18.5% (calculated as revenue of FY20/TAM). Overall, India’s online beauty and personal care market is estimated to reach $5.4 Bn by 2025. Purplle, SUGAR Cosmetics, Pureplay, Mamaearth and MyGlamm are a few other players in this market. MyGlamm entered the unicorn club yesterday.