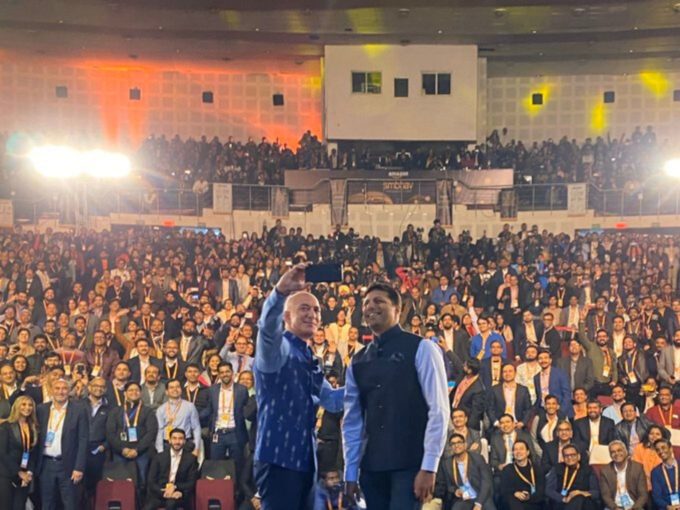 From announcing $1 Bn investment in India to calling the country as one of the emerging global leaders, Amazon founder Jeff Bezos’ India visit was indeed eventful. During his visit, Bezos also announced that the company is going to double its investment in its over-the-top (OTT) video streaming platform Amazon Prime Video.

However, not everything went as planned. Not only Bezos had to change his plans last minute, but the Amazon Smbhav event also had one or two hiccups.

Here Are The Top Six Highlights From Bezos’ Visit To India

Bezos kicked off the event by announcing that the company is going to invest $1 Bn in India to support small and medium-sized businesses (SMBs). In conversation with Amazon India Head Amit Agarwal, Bezos said that the investment will digitise Indian SMBs and will help them to export goods valuing over $10 Bn worldwide by 2025.

Impressed with India’s growth trajectory, Bezos also predicted that this century belongs to India. According to Bezos, factors like dynamism, energy, and the interest of people in self-improvement will show results. “21st century is going to be India’s century,” he added.

Highlighting that punctuality is an important subject for him, Infosys founder, Narayana Murthy, almost walked out from the Amazon Smbhav event, thanks to delays in the event’s schedule.

While Murthy was asked to speak for 15 minutes at the event, he deliberately cut short his speech due to delayed start. “I should have finished my talk at 11.45 a.m. But it’s 11.53 a.m. Therefore, I will try and paraphrase my talk,” Murthy told the gathering.

No Meet With Narendra Modi

Since the announcement of Bezos coming to India first surfaced, there were multiple speculations that Amazon founder was going to meet Prime Minister Narendra Modi. According to some reports, it was speculated that the Amazon founder is going to discuss regulatory issues with PM Modi. However, that didn’t happen.

Amazon had reportedly contacted the Prime Minister’s office seeking an appointment, but the company informed about the improbability of the meeting last month. Further, a source told ET that the government may have cancelled the meeting with Bezos to pacify Indian traders, who have been aggressively protesting against ecommerce companies for flouting FDI norms, discounting, seller bias and other issues.

By announcing the $1 Bn investment in India, Amazon’s founder must have hoped for a positive response from the government. However, commerce minister Piyush Goyal doesn’t seem much impressed with it. Speaking on the sidelines of a security conference in New Delhi, Goyal said that Amazon is doing no big favour to India by investing a billion dollars.

Additionally, the union minister also took to Twitter to indirectly comment on Amazon’s fiasco with traders. He tweeted that the Indian government has allowed ecommerce entities to come to the country under a marketplace model and as long as they follow the rules and regulations, the Indian government would welcome them.

In addition to dedicating $1 Bn funds to India, Bezos also announced that the company is going to double the investment in the Amazon Prime Video streaming platform in the year to come.

Bezos noted that Amazon Prime Video is one of the biggest products for the Indian market, given its success in recent years. Highlighting the growth of Amazon Prime in India, Bezos also said that average watch time on the video streaming platform has gone up by six hours in the last two years.

Two Sides Of The Same Story

While the Amazon founder tried his best to lure SMBs with the $1 Bn investment, small traders and merchants held a continuous protest against the company for allegedly killing their businesses. The tussle between the Confederation of All India Traders (CAIT) and the online marketplaces have been going on for over a year now and to show their dissent against Amazon, CAIT organised a protest in New Delhi while the company’s founder was here.

The body has been alleging that both Amazon and Flipkart are flouting FDI norms. Additionally, the traders’ body has retreated that these companies are involved in unethical practices such as deep discounting, predatory pricing, preferring sellers, exclusive tie-ups with brands and banks, among others.