In post-truth era, it seems speculations and so-called fake news and conspiracy theories not only make things happen, but turn things the other way too. While JP Morgan Chief Jamie Dimon labelled bitcoins as, “Fraud, stupid and dangerous thing” on September 12, 2017, BTC China (BTCC), world’s second largest cryptocurrency exchange announced the closure of its China operations, yesterday. The company notified the same in its official tweet.

1/ After carefully considering the announcement published by Chinese regulators on 09/04, BTC China Exchange will stop all trading on 09/30.

As the news broke, bitcoin price has plunged by 16% and is expected to come down below $3,000. In a followup tweet, BTCC has clarified, “BTCC products, including BTCC Pool, are not affected by this change.”

According to the popular cryptocurrency webdaily Coindesk, the tweet has come after a Shanghai-based business media Yicai, reported that the city’s Municipal Financial Service Office has issued an order to all the cryptocurrency startups to cease their operations. Another leading Chinese cryptocurrency exchange ViaBTC has announced to shut down its operations. The statement reads that the decision was made in tune with the official policies. Though the Chinese government is yet to make any official statements regarding these closure orders, other Chinese bitcoin exchanges too will supposedly cease their operations by the end of September. 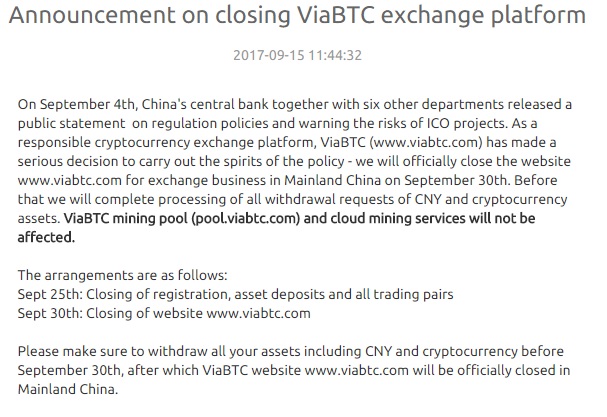 The Bloodbath: Bitcoin, a Fraud?

Jamie has sparked another bitcoin bloodbath by calling cryptocurrency, a fraud. The Bitcoin enthusiasts and experts too, have gone after him vehemently, calling Dimon, a naive tech-entrepreneur.

Jamie, you’re a great boss and the GOAT bank CEO. You’re not a trader or tech entrepreneur. Please, STFU about trading $BTC.

John McAffe, Founder, McAffe AntiVirus and Chief Cybersecurity Visionary of MGT Capital Investments, Inc said, “Credit where credit is due, Dimon is a great leader at Morgan. He’s been involved with some rather unsavory aspects of the behemoth’s operations over the last half decade or so but the stock is up more than 120% over the last five years and it’s tough to argue with that.”

This month hasn’t been good at all, for bitcoin and cryptocurrency enthusiasts, startups, developers and miners. Post bitcoin’s hard-fork, a series of unfortunate events followed. Some of the major developments that happened during the first fortnight, this month, are:

China and Russia which at one point of time seemed to be the angel markets for bitcoin startups have seemed to turn hostile now. While China is starting a big crack-down against ICOs, Russia too, recently arrested people trading bitcoins illegally. Ransomware attacks that happened worldwide asking money in bitcoins have  made financial regulators alert towards the unregulated bitcoin transactions. Earlier this year, India’s RBI had already issued a warning to all cryptocurrency users about the risk pertaining to bitcoin transactions.