IndiaMART total revenue for the first nine months, from April to December, of FY21, stood at INR 565 Cr, an 11% year-on-year growth

For the same period, IndiaMART’s expenses fell by 28% to INR 265 Cr, meaning a net profit of INR 233 Cr for the nine-month period

In May, the company’s CEO and cofounder Dinesh Agarwal said each month of the Covid-19 lockdown could see IndiaMART’s 147K-strong customer base shrink by 10-20% 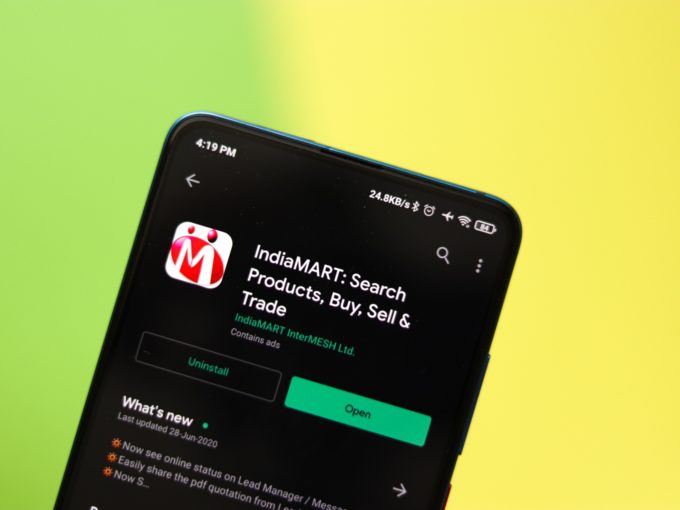 Publicly-listed online B2B marketplace IndiaMART recorded total revenue of INR 565 Cr for the first nine months, from April to December-end, of the current fiscal year FY2021, according to the company’s filings with the Bombay Stock Exchange.

For the same period, IndiaMART’s expenses fell by 28% to INR 265 Cr, meaning a net profit of INR 233 Cr for the nine-month period, a 120% year-on-year increase compared to the same period last year.

When compared to the same period last year, the company has seen its revenue grow by 11%. This despite the company’s CEO and cofounder Dinesh Agarwal telling Inc42 in May that each month of the Covid-19 induced lockdown could see IndiaMART’s 147K-strong customer base shrink by 10-20%. The company’s paying subscription suppliers did reduce to 133K in the first quarter.

Going by quarter-on-quarter profit margin growth, we expect IndiaMART to comfortably double its profit numbers from FY20. In FY20, the company reported INR 146 Cr in profit, whereas it has already nearly doubled it in nine months of FY2021 with INR 233 Cr in profit so far. With an average quarterly profit of INR 70 Cr, IndiaMART could comfortably cross the INR 300 Cr mark in FY21.

In the fiscal year ending March 31, 2020, i.e FY20, IndiaMART recorded total revenue of INR 692 Cr. Considering that it has already recorded revenue worth INR 565 Cr till December 31, 2020, it is expected that the company will see revenue for FY21 surpass the previous year’s figures.

Incorporated in 1999 by Brijesh Agrawal and Dinesh Chandra Agarwal, Noida-based B2B marketplace IndiaMART went public in June 2019. The company reached 100 Mn users in the last quarter of FY20. According to Agarwal, IndiaMART has a strong presence in Tier 2 and Tier 3 markets, and only 33 to 34% of its traffic comes from the top eight metro cities.

Inc42 previously reported how the company’s financial statements for the first quarter of FY21 (April-May-June) had come as a relief for its stakeholders, considering that the countrywide lockdown due to Covid-19 had restricted business to only essential products and cash flow had dried up to a large extent during the lockdown.

Despite these challenges, the company recorded a 64% increase in its net profit at INR 74.6 Cr in the first quarter of FY21, versus INR 44 Cr in the previous quarter. In terms of year-on-year growth.

Commenting on IndiaMART’s financial performance then, Dinesh Agarwal had said, “I am pleased to report a modest financial performance this quarter as the ongoing adverse market conditions had an anticipated impact on our customers, revenue, deferred revenue and cash flow from operations. While we managed to improve profitability due to cost optimisation measures, our focus remained to stand by our employees and customers during these testing times.”