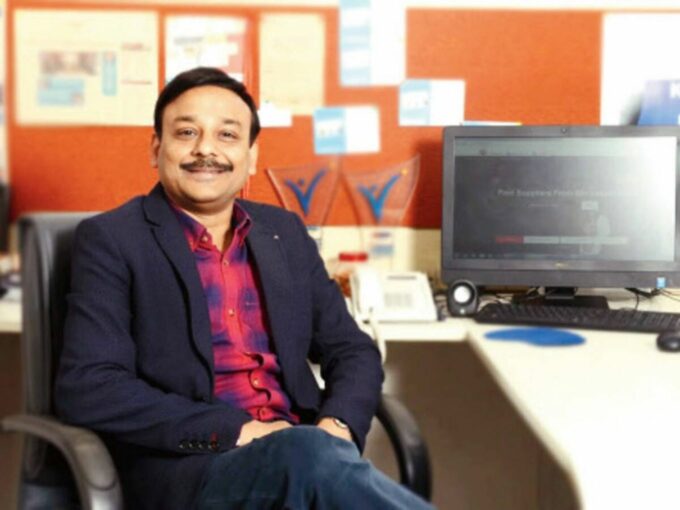 B2B ecommerce platform IndiaMART has posted over 64% increase in its net profit at INR 74.6 Cr in the first quarter of the financial year 2021, versus INR 44 Cr in the previous quarters. In terms of year-on-year growth, the listed company has registered a two-fold increase from INR 32 Cr.

This comes even as the company was noting a sluggish growth in the first few months of April to June quarter. In an exclusive interaction with Inc42 in May, CEO and cofounder Dinesh Agarwal had noted that IndiaMART could lose between 10% and 20% of its 147K paying customer base every month under the lockdown. The company’s paying subscription suppliers did reduce to 133K in the first quarter.

But overall the company’s financial statement has come off as a relief to stakeholders, especially in such volatile times. Though business was restricted to essential products and cash flow had dried up to a large extent during the lockdown, the company managed to keep its total income intact at INR 187 Cr in both Q1 FY21 and Q4 of FY20 ending in March. The B2B company has noted a 16% increase in its total income compared to INR 162 Cr in the Q1 of the previous year. 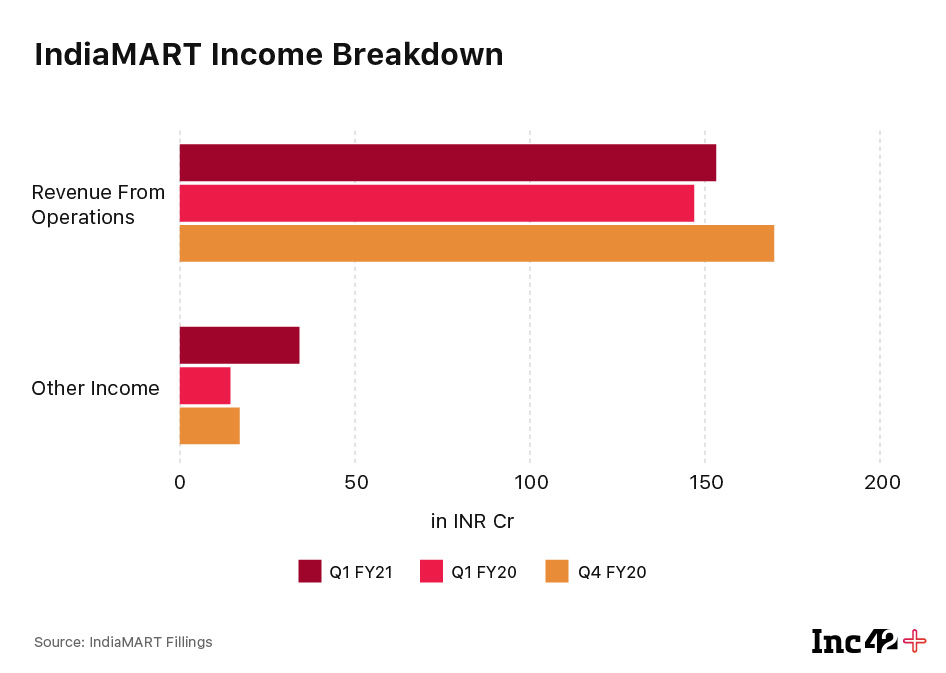 IndiaMART’s revenue from operations declined by 10% from INR 170 Cr in Q4 FY20 to INR 153 Cr in this quarter. Its cash generation from operations also dropped by 94% to a meagre INR 3 Cr from INR 94 Cr in Q4 FY20. The company’s profit was saved by its other income totaling to INR 34 Cr versus INR 17 Cr the previous quarter. It’s deferred revenue also dropped by 8% to INR 628 Cr this quarter from INR 685 Cr from the previous quarter. 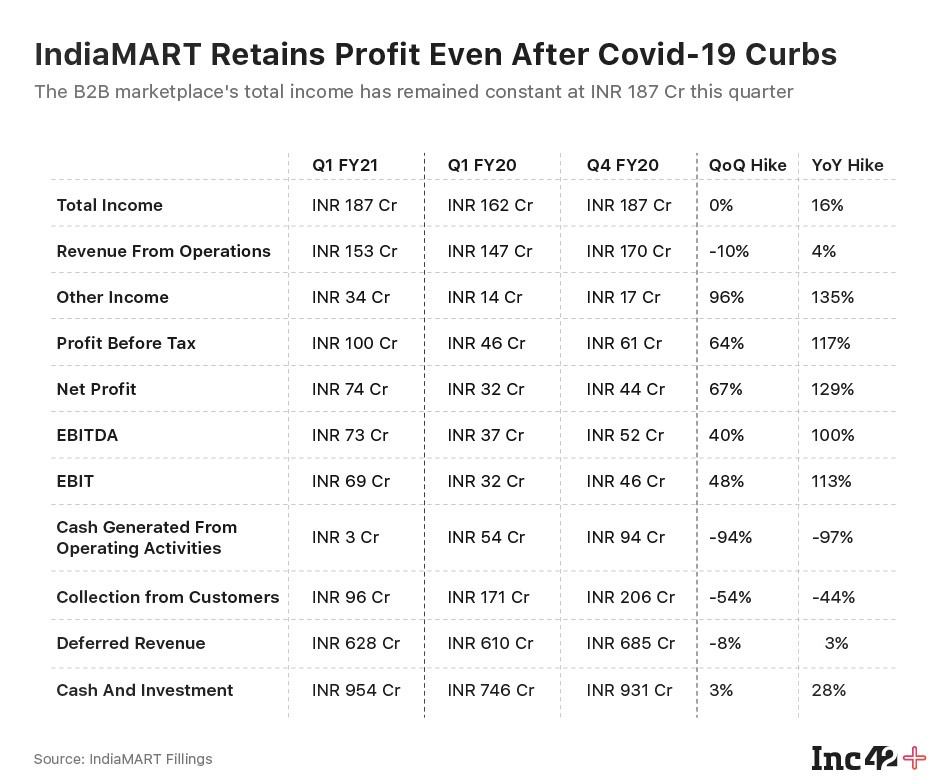 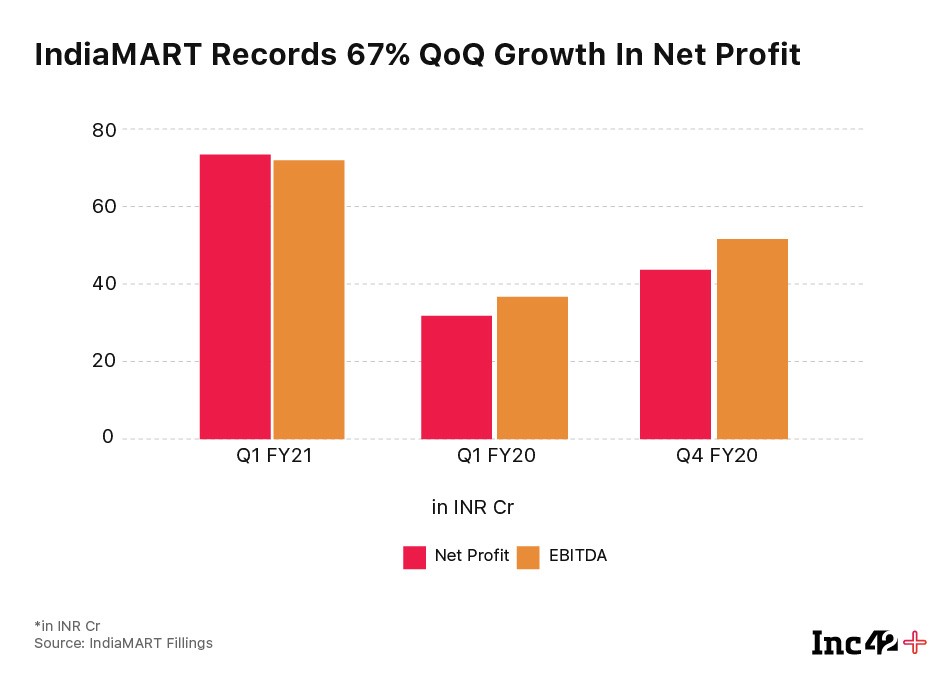 Commenting on IndiaMART’s financial performance, Dinesh Agarwal said, “I am pleased to report a modest financial performance this quarter as the ongoing adverse market conditions had an anticipated impact on our customers, revenue, deferred revenue and cash flow from operations. While we managed to improve profitability due to cost optimisation measures, our focus remained to stand by our employees and customers during these testing times.”

The company’s traffic grew to 191 Mn in Q1 FY21 from 180 Mn in Q4 FY20, though Agarwal had previously noted that IndiaMART’s traffic had reduced to almost 50% across all the geographies and categories combined in the month of April. Notably, IndiaMART InterMESH shares also surged 12% in morning trade on July 22 after the company reported its financial performance.

Incorporated in 1999 by Brijesh Agrawal and Dinesh Chandra Agarwal, Noida-based B2B marketplace IndiaMART went public in June 2019. The company had reached 100 Mn usermark in the last quarter of FY20. Dinesh Agarwal had also noted that it has a strong presence in Tier 2 and Tier 3 markets, and only 33 to 34% of its traffic comes from top eight metro cities.