Updated: After Withdrawing Placement Offers To Prospective Hires, Grofers To Fire 10% Of Its Workforce

Updated: After Withdrawing Placement Offers To Prospective Hires, Grofers To Fire 10% Of Its Workforce

After shutting down its operations in 9 cities in January, Grofers is now laying off 10% of its employees, a source close to the development said.

Post the one on one conversations, email ids of the fired employees were immediately disabled.

The fired employees were majorly from the delivery and customer relation managing teams. The company has a team strength of 2000.

The company was also buzzing over social media today, for withdrawing the placement offers it had extended to prospective hires of 2016. An email shared with us, points out to the fact that trouble is still not over for the hyperlocal player despite it downsizing its operations in the beginning of the this year.

On similar lines is a FB post which spoke about how a prospective hire’s placement offer was retracted two days prior to his joining. 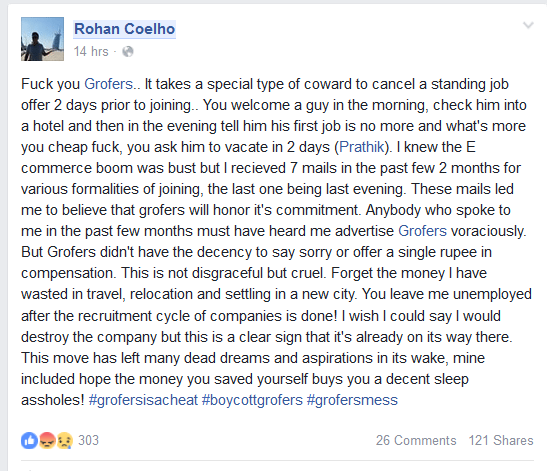 Interestingly, the same user’s FB post in August last year was a jubilant one, of being selected as an operations manager at Grofers.

With the money in hyperlocal drying up, shutdowns, downsizing, and cancelled offers are becoming an oft repeated event. Grofers’ last round of funding was in November 2015, when the company raised about $120 Mn (INR 780 Cr) in a funding round led by Japan’s SoftBank Corp. The round also saw participation from its existing investors Tiger Global and Sequoia Capital. Apoletto Managers, a personal fund managed by DST Global’s partners, also participated in this round.

Incidentally, this was the startup’s third round of funding, which sent its valuation rocketing to more than $300 Mn from $33 Mn in February 2015. The startup has raised more than $160 Mn in funding till date.

But trouble still continued. Before this round, in October 2015, the company halted operations in certain parts of Delhi NCR due to operational issues after employees in Noida stopped working due to layoff speculations. The operations were resumed after a few days. Then, in December, Varun Khurana resigned from his post as the company’s CTO. He had spent less than a year with the company. And in January 2016, followed the announcement of shutting down operations in 9 cities – Bhopal, Bhubaneswar, Coimbatore, Kochi, Ludhiana, Mysuru, Nashik, Rajkot and Visakhapatnam. Ironically, just four months prior to this announcement, Grofers had expanded to 27 cities.

On similar lines, Gurgaon-based on-demand grocery delivery startup PepperTap also shut operations in six cities. And in April came the announcement that it was shutting down its customer centric grocery delivery app and was pivoting to a full stack ecommerce logistics company. Prior to that, there were others in the grocery space such as Localbanya and Townrush which had to shut down operations. Biggies like Paytm and Flipkart too had tasted waters in this segment, but pulled back soon. This month, another hyperlocal mobile commerce marketplace LazyLad has also pivoted into a B2B focused marketplace. Other startups who recently laid off employees include Helpchat, InMobi, Hiree, Girnar Soft, and Askemebazaar.

Recently, Flipkart and Roadrunnr also delayed the joining of campus hires. While Flipkart has given assurance to provide internship with a stipend of INR 50,000 per month, Roadrunnr has agreed to provide joining by September. This month, placement heads of 16 IITs decided to blacklist 6 startups from participating in campus placement for the academic year 2016-17. The list includes companies like etailer Zimply, healthcare startup Portea and grocery portal PepperTap. Students were left in the lurch after these startups withdrew their offer completely.

Now, with the news of Grofers retrenching placement offers and firing employees, it looks like that despite hefty investments that flowed in the hyperlocal sector in India, it still seems to be operating on thin ice.

In a response to Inc42, Grofers stated that they would be coming out with a statement on the same.

The story is developing, stay tuned for more updates.

We have been making some necessary strategic changes within the company. These changes have made the new roles redundant and therefore, we are no longer able to continue with the offers we made a few months back. A total of 67 offers have been revoked. We are downsizing some of the teams given the market environment and our revised growth projections. 10% of our employees would be affected by it. We are offering severance benefits and outplacement services to all our affected employees.

Also, the startup has also come up with an official blog post titled ‘heartfelt apology’ wherein founders Albinder and Saurabh have spoken about the “difficult decisions over the past few days.”

We had to take some difficult decisions over the past few days. We realize the impact this has on our campus hires and we do not view it lightly. But even before that, we want to apologize for the way we handled the situation.

Our communication yesterday has left a lot to be desired and we accept full responsibility for it. The ones affected by this decision deserved much more empathy and understanding – and the fact that we failed in that is unacceptable. We are really and truly sorry.

On why we had to take this step. In the past couple of months, we have been making some necessary strategic changes within the company. The changes we have made will, in our opinion, benefit our customers in the long term. However, these changes have made the new roles redundant and therefore, we are no longer able to continue with the offers we made a few months back.

As part of this, we have also had to let some of our existing employees go. We appreciate the contribution made by these employees as they helped us reach this level of growth. They have been valued members of Grofers and their separation is in no way a reflection of their performance. We deeply regret the steps that we had to take. We thank them for their efforts and wish them the best in the next part of their professional journey. For all our affected employees, we are offering severance benefits and outplacement services.

This was definitely not an easy call to make. But it was something that was necessary for our business.