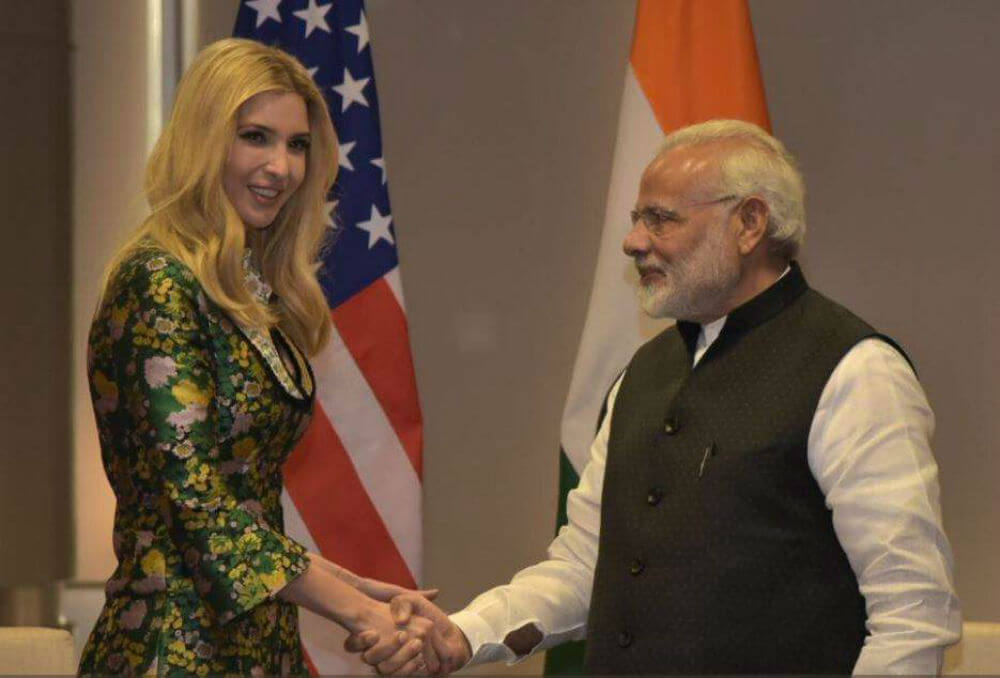 Addressing the inaugural session of the eighth edition of the Global Entrepreneurship Summit 2017 (GES 2017) in Hyderabad, PM Narendra Modi hard sold Make in India, pitching India as an attractive investment destination to global investors. US President Donald Trump’s daughter and adviser Ivanka Trump, was the star guest at the summit and launched the summit with the PM.

He also highlighted the steps India has taken to improve the ease of doing business and expressed the government’s resolve to improve its ranking from 100, as currently designated by the World Bank, to 50.

PM Narendra Modi said, “To my entrepreneur friends from across the globe, I would like to say: Come, make in India, invest in India – for India, and for the world. I invite each one of you to become a partner in India’s growth story. And once again assure you of our whole-hearted support.”

The three-day GES 2017 summit, co-hosted by the US and Indian governments, is the first in the annual series to be held in South Asia, has ‘Women First, Prosperity for All’ as the theme. More than 50% of the delegates are women.

He further stated, “Our government has taken several steps to improve the business environment. The jump in India’s ranking in the World Bank’s Ease of Doing Business Report, from 142 to 100, in three years, is a result of this. We have improved on indicators like dealing with construction permits, getting credit, protecting minority investors, paying taxes, enforcing contracts and resolving insolvency.”

While PM Modi stressed on selling Make In India, Ivanka Trump spoke about the importance of education and entrepreneurship. With more than 50% of the delegates, around 1,500 entrepreneurs and investors from 150 countries, attending GES 2017 being women, Ivanka said she was excited to see so many women entrepreneurs under one roof. “I am proud to see that for the first time a majority of 1500 women entrepreneurs are participating in such an event. Only when women are empowered to thrive; will our families, our economies, and our societies reach their fullest potential,” Ms Trump stated.

She further added that globally, between 2014 and 2016, entrepreneurship activity among women increased by 10%. In the US, within the last decade, the number of women-owned firms has grown by 45%. Minority women have started nearly 8 in 10 new women-owned businesses.

“Today, more than 11 Mn women in the US own businesses. Many women become entrepreneurs out of necessity. Fuelling the growth of women-led-business is not only good for the society but also the economy,” Ivanka further reiterated.

Meanwhile, speaking on his government’s efforts to boost entrepreneurship, PM Narendra Modi stated that more than 90 Mn loans worth $66.49 Bn (INR 4.28 Tn) have been sanctioned by the centre under the Pradhan Mantri Mudra Yojana, of which 70 Mn have gone to women.  The government has also started the Mentor India initiative to promote a culture of innovation and entrepreneurship among school children. So far, 900 schools are under this programme. Further 19 incubation centres have been created in various institutions and universities to nurture innovative startups and businesses to become sustainable. The centre has also launched a programme to provide high-speed broadband internet to all rural areas by March 2019.

While the fact that the GES 2017 is being held in India illustrates the warmth in ties between India and the US and India’s rising clout as an economic destination, India still has a far way to go as far as women entrepreneurship is concerned. As per NITI Aayog CEO Amitabh Kant, women entrepreneurs in India contribute only 17% to the GDP while globally it is 30%. For India to grow at 8-9%, gender parity is essential which is still languishing in the country. While PM Narendra Modi is riding high on the improvement in India’s business rankings and pitching Make in India aggressively to investors, it remains to be seen how far the government’s fervour to boost entrepreneurship will lead to flourishing women entrepreneurship in the country.

[The development was first reported by LiveMint]