Was the pandemic more harsh on female employment than male jobs? How gender-inclusive are India’s largest public tech companies and startups? Has the government done more than talk when it comes to women-run MSMEs?

Each year, Women's Day brings into focus the range of concerns and challenges facing women entrepreneurs, small business owners, workers and the next generation of Indians entering the job market

Gender diversity and inclusion are fast becoming metrics by which startups are evaluated, but the technology world still has to shed a lot of its ‘bro culture’ baggage, and when it comes to the economy at large, the gender gap is certainly wide and present. On International Women’s Day 2022, we thought it pertinent to study the several gender gap and inclusion indicators within the startup ecosystem as well as the wider economy in the post-pandemic world.

Was the pandemic more harsh on female employment than male jobs? How gender-inclusive are India’s largest public tech companies and startups? Has the government done more than just talk when it comes to women-run MSMEs? It is not just about token appreciation or lip service, because an economy that’s not inclusive — where half the population is not able to contribute equally — cannot grow to its fullest potential. It’s simple maths.

Of course, right around March 8 every year, we see companies tout their gender inclusion metrics, the measures they have taken to create a safe workplace or the policies that are said to be women-first, including the contentious menstrual leave policy as well as recognising same sex partners as beneficiaries for employee insurance. But often these are all token efforts that are meant to bring in the eyeballs given that International Women’s Day is a major social media and organic trend on and around March 8.

Don’t get us wrong; we are certainly not saying that companies should not talk about these on IWD, but it should not simply be a means to make the most of the hype, with no follow-through. And beyond statements, the goal should be to put women at the centre of culture, leadership and processes, which automatically creates an enabling and inclusive atmosphere for people of all walks of life.

So just how far away are we from such a place? We picked out the key numbers around gender inclusion, women entrepreneurship, ability to drive large businesses and more. Here are eight graphics that we believe paint an accurate picture of the role of women in tech and the Indian economy.

At Inc42, we are an open, inclusive and equal-opportunity organisation, and we love the vibrancy that this diversity brings to our startup and newsroom.

We are proud to say that 43% of those who work at Inc42 are women, but that’s still short of where we want to be. From the editorial to marketing and from sales to the operations team — we have exceptional women leaders across functions, and we are always looking for more inspirational women to join our team. See the roles we are looking to fill, and join our amazing team.

Let’s start with the state of the unicorns and soonicorns in India, which are essentially some of the largest private companies in the country today, with some even being global challengers. 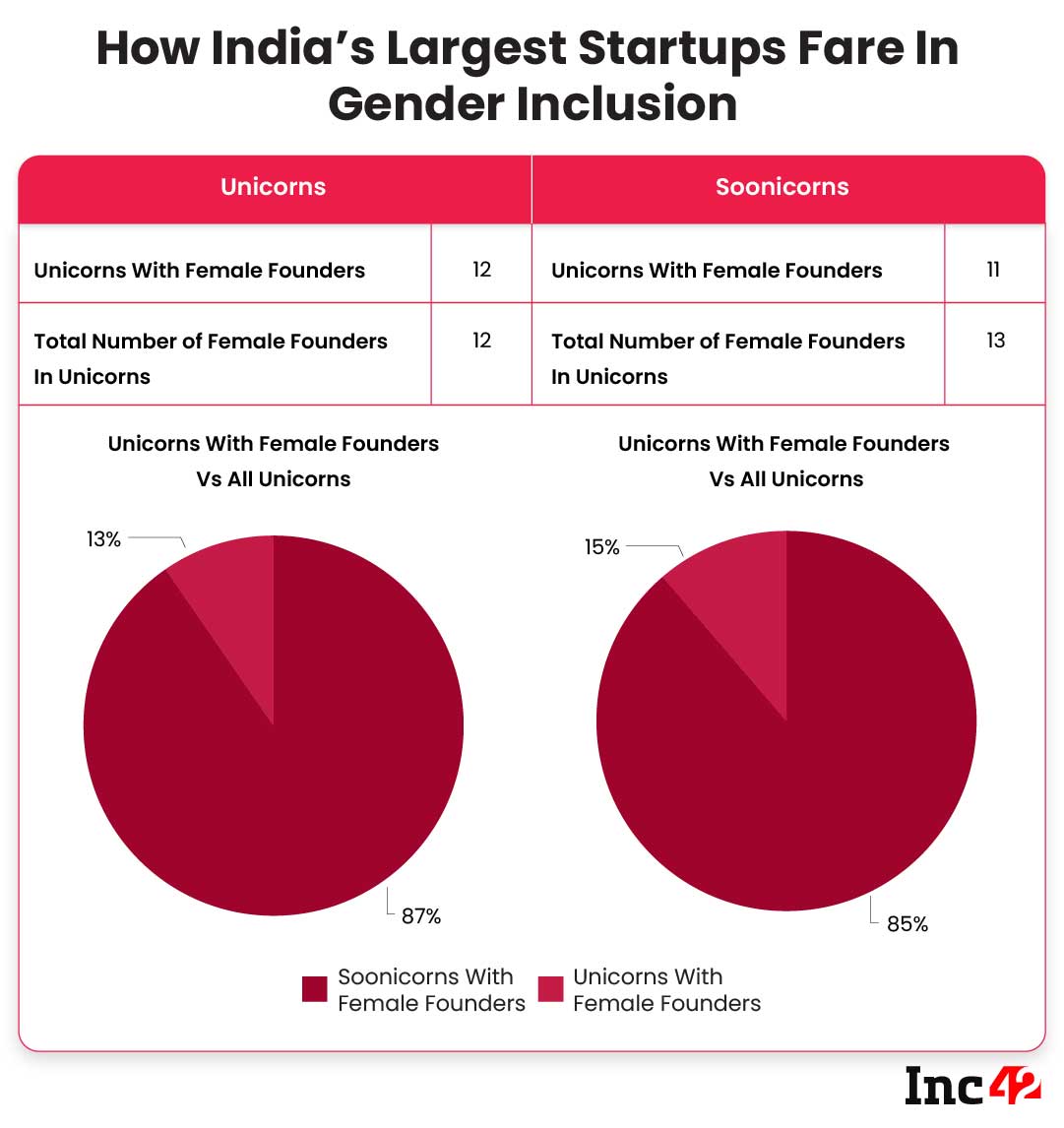 The larger concentration of women entrepreneurs among soonicorns (startups that are on the verge of entering the unicorn club) is arguably an indicator that female participation in startup creation is increasing, though the numbers for the two segments are not too different for us to claim this with any great confidence.

That could change if more and more D2C startups graduate to the soonicorn and unicorn club, because as we will see, the D2C segment in ecommerce has a higher incidence of women-run companies.

First let’s look at the sectors that have the most number of unique funded startups with women founders. Ecommerce leads the pack but sectors like edtech, fintech and enterprise tech are seeing increasingly growing numbers of women-run startups. 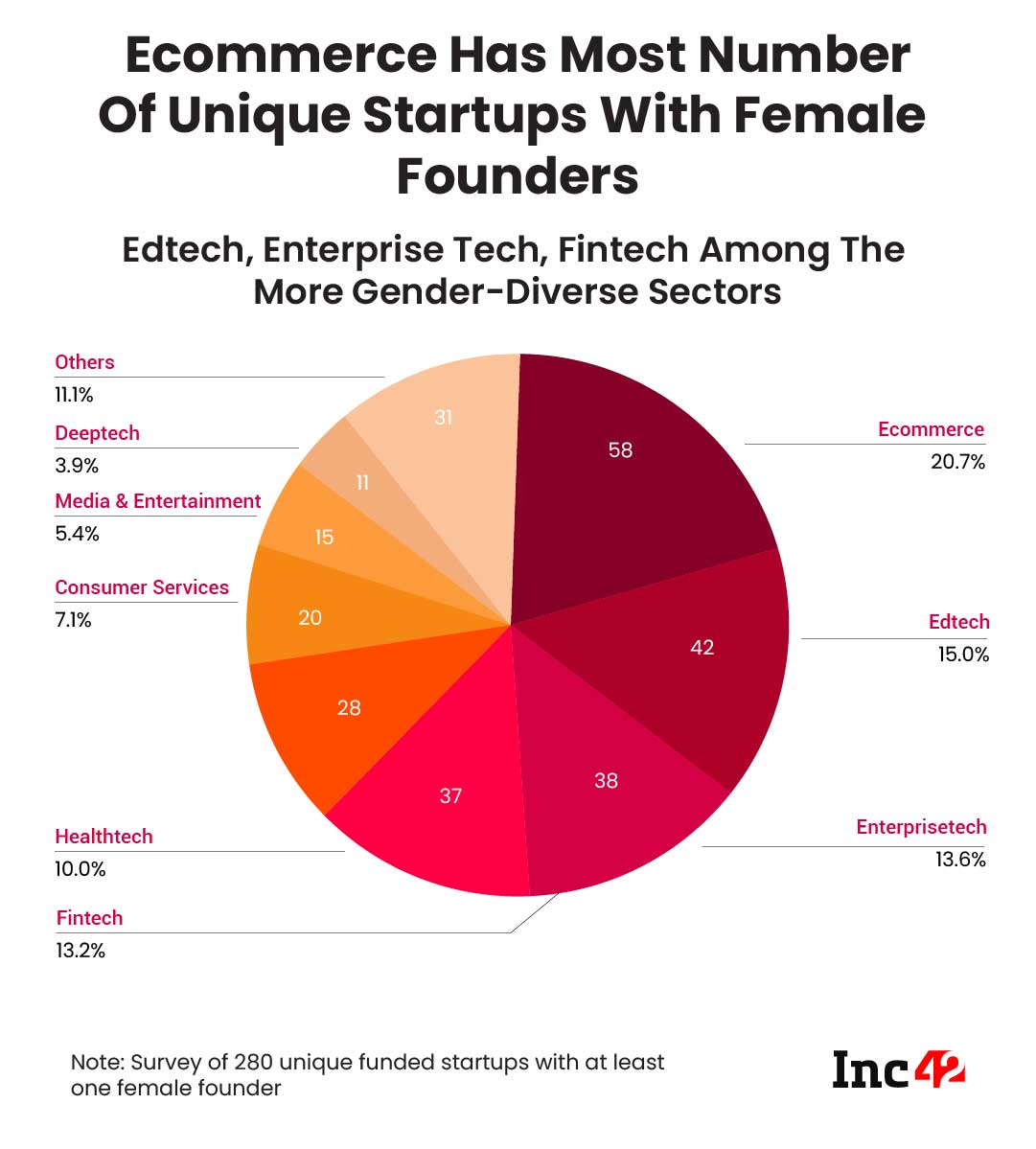 As hinted above, the D2C segment is an outlier of sorts in this scheme of things. It has a significantly higher number of women founders when looking at the average participation across sectors. 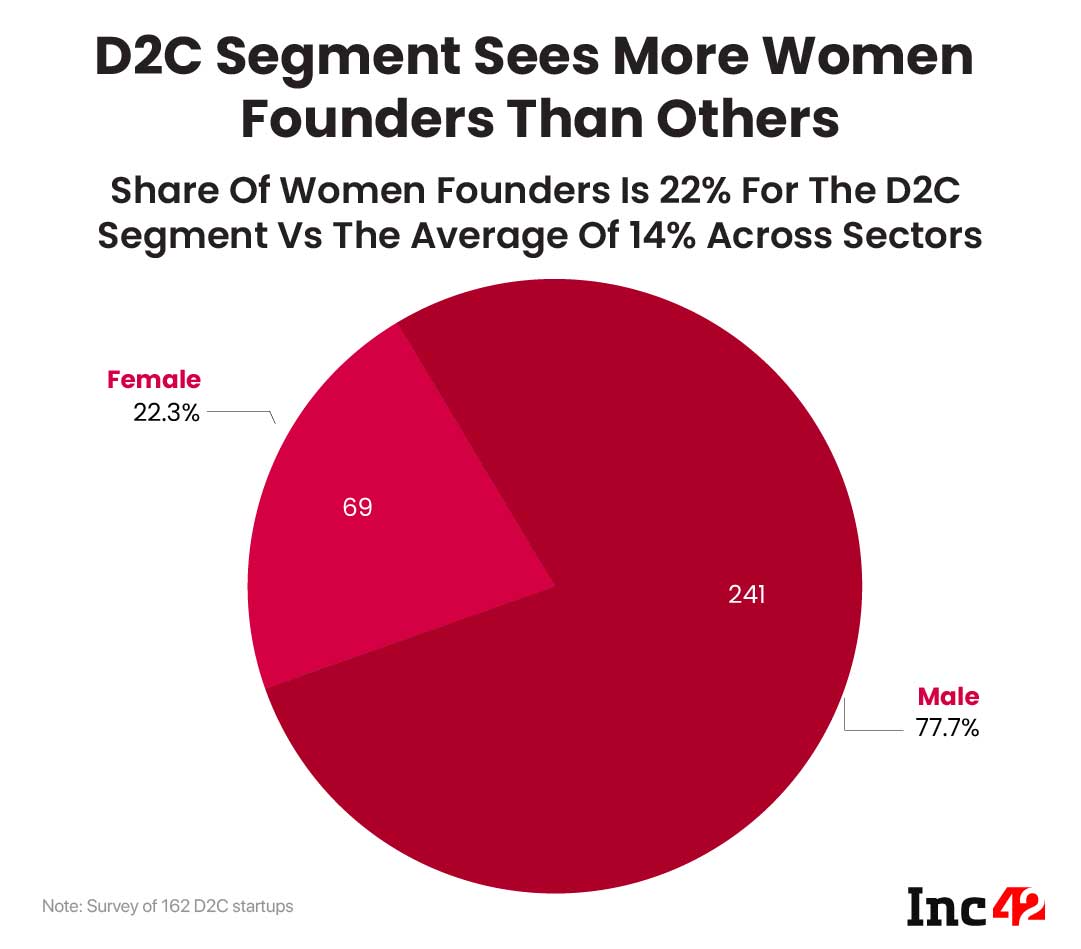 Last week, we released our inaugural Fast42 list featuring India’s fastest-growing D2C brands and startups. Interestingly, 16 out of the 42 brands selected or 38% have a woman founder, once again highlighting that the D2C segment is certainly more diverse and inclusive than other sectors.

While the government has taken steps to back startups, women entrepreneurs have found themselves largely neglected in official Union Budget allocation save for the occasional allocation for self-help groups.

One reason that could explain the higher number of women-run startups within the D2C segment is the nature of the investor. Investors are proactively scouting for opportunities to invest in women-led startups, particularly for new-age brands. 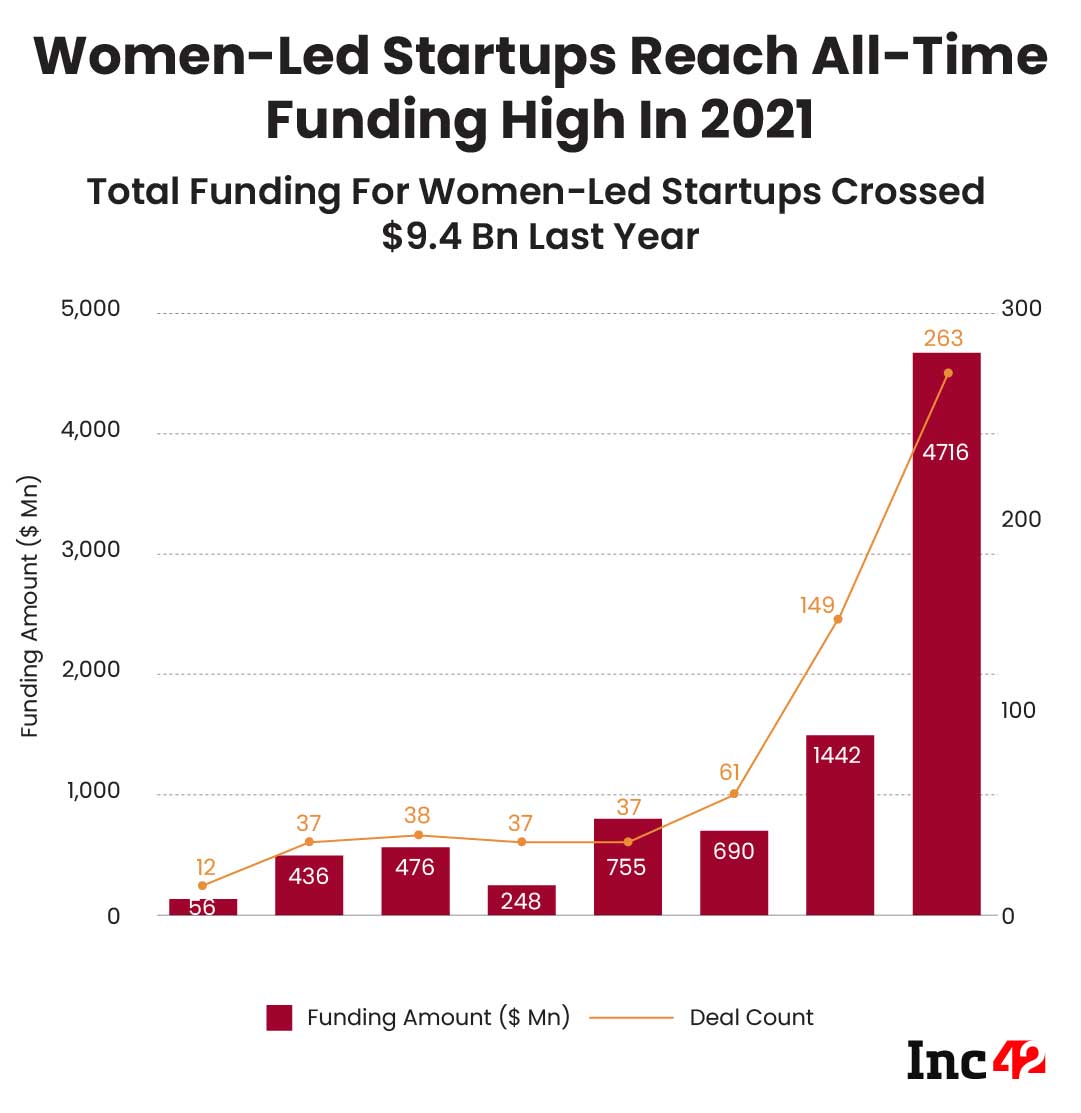 Venture capital firms are getting firmly behind the inclusion effort through environmental, social and governance (ESG)-led investments — this is not just true for the D2C segment, of course. It has lifted women-led startups in all sectors.

Of course, when we look beyond startups and at publicly listed tech companies — including the 11 that IPO’d last year — the situation is rather bleak.

No Board For Women

Five out of the 14 startups just have one woman on the board, while only Zomato has 50% representation for women on its board. Nykaa has four women on the board, but two of them are from the Nayar family which owns a majority of the company.

One cannot expect that startups will change overnight or that the gap will reduce at the top just because it has been pointed out. The problem is of course deeper than the inertia of investors or business leaders.

When we look at the grass roots, we find that the inclusion funnel is narrow at the top — gender gap in job participation, education and financial indicators are woefully behind global standards.

As per the Election Commission of India, women represent 10.5% of the total members of the Parliament and just 9% of the state legislative assemblies. Further, according to Global Gender Gap Report 2020, India ranks 112th in educational attainment out of 153 countries. The financial inclusion gap between men and women in India is also abyssal. 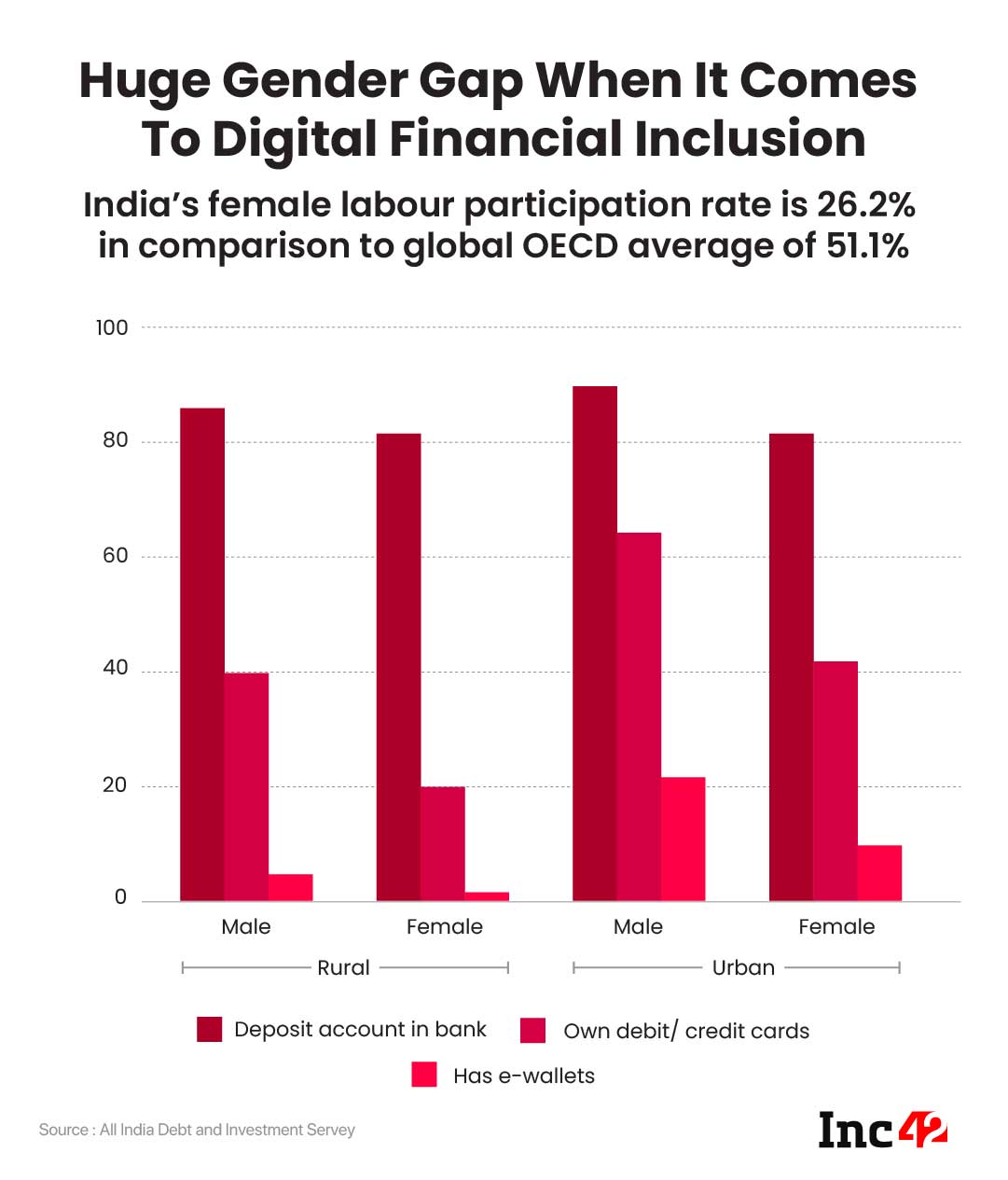 The government push has come in policy and speech, but actions paint a far weaker picture. In fact, the central government has not updated data for women-led MSMEs in two fiscal years, so the same data has been carried by the MSME ministry for the past two years.

It shows that women-led MSMEs make up 20% of the overall market — which is admittedly higher than startups — but this does not mean anything unless we contextualise it with another number. When you look at the procurement from MSMEs by the central government, non-women-run MSMEs have a 98%+ share. With INR 357 Cr in sales to the government, the 12 Mn women-run MSMEs have a miniscule 1.8% share. 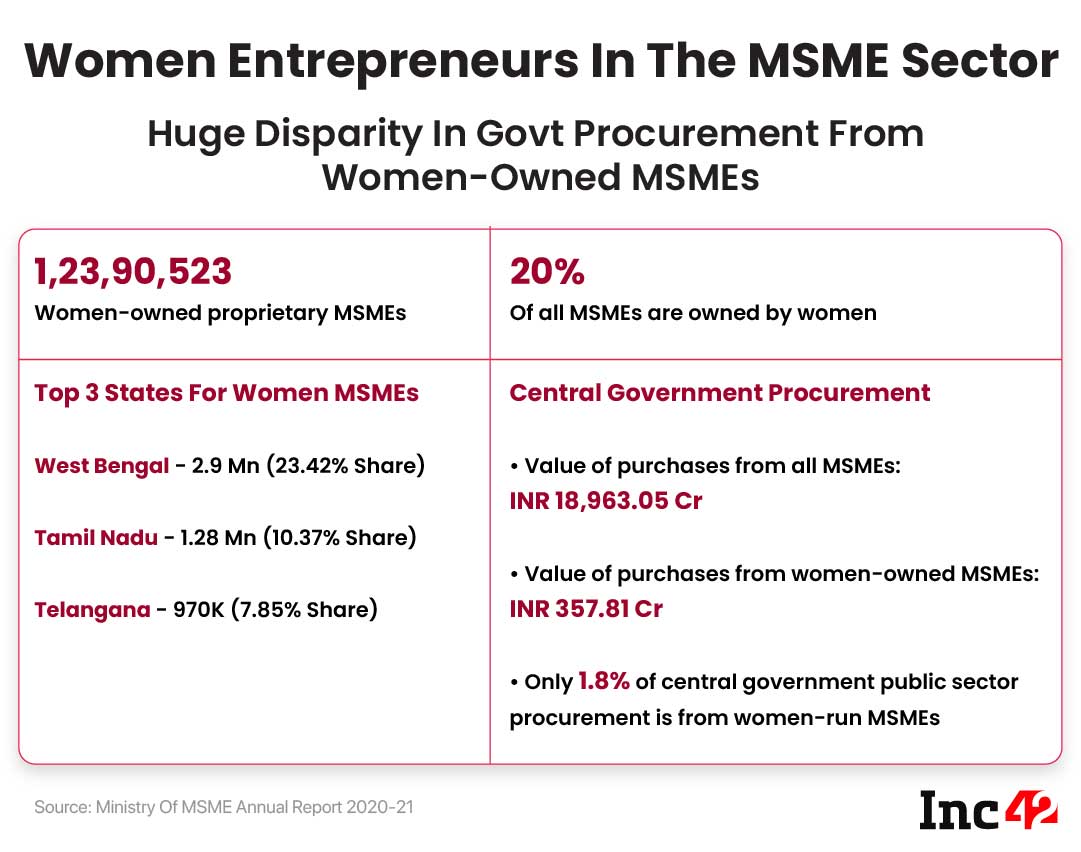 We hope this number changes by the time the next report from MSME ministry is out, or the government’s claims to boost the MSME sector holistically will prove to be nothing but bluster.

And Then There’s Covid

Finally, let’s look at the other big threat in recent times — the pandemic. Covid-19 came three years ago as its name suggests, and despite what the public at large might feel about the pandemic ending, we are still firmly in its cycle.

The pandemic continues to impact livelihoods in India due to various ancillary factors such as health, inability to move to cities, the changing dynamics of domestic life and its pressures among other issues. But it’s negative impact is skewed towards women workers, as per multiple reports. 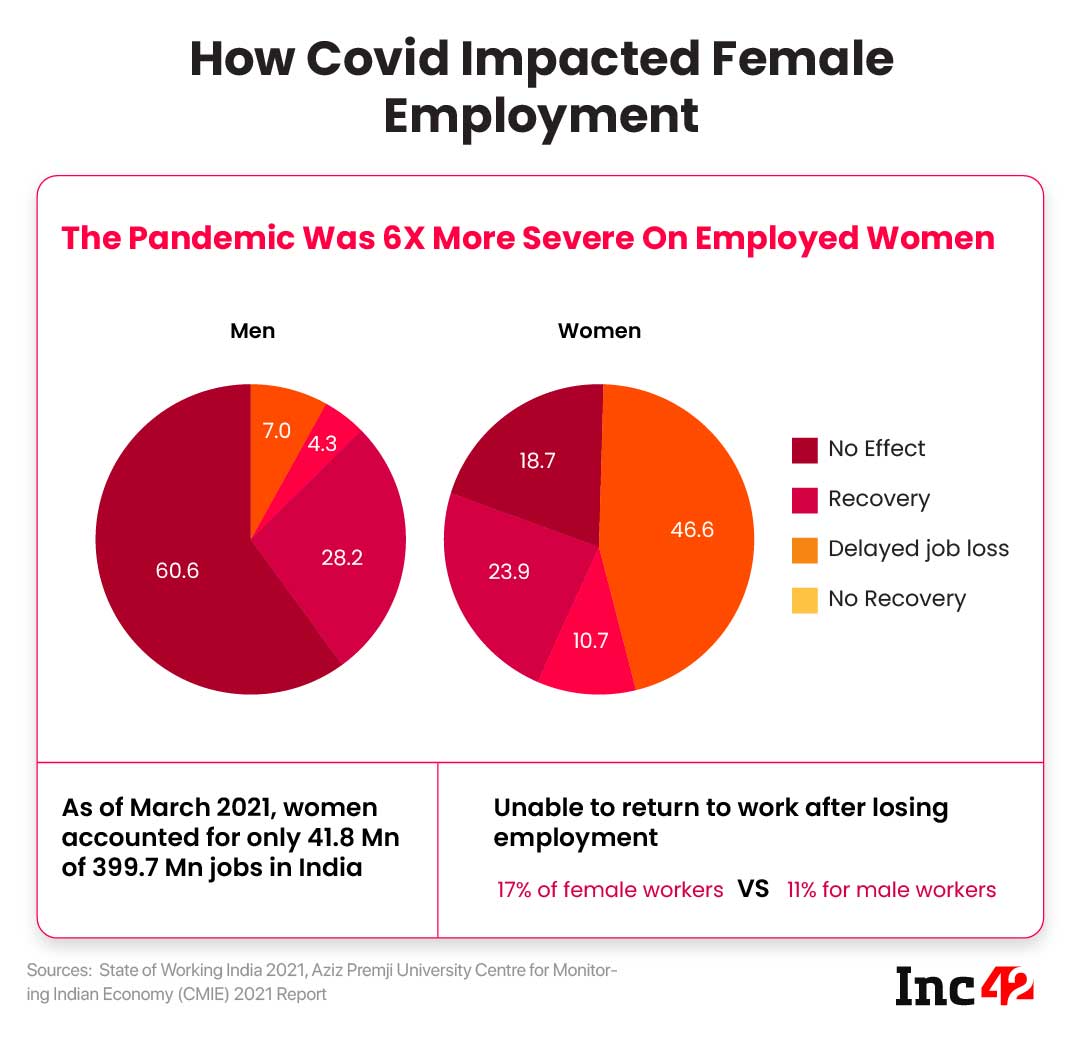 As we can see, female job participation in the organised economy is falling severely due to the pandemic. It’s just over 10% currently, as per CMIE estimates. And women workers find it harder to get back to their jobs because they are almost always juggling their domestic duties with their professional or occupational responsibilities.

One hopes that as the economy bounces back to pre-Covid levels, these numbers will look like a temporary blip.

Even as there’s plenty to celebrate when it comes to women in tech — the Nykaa listing, higher prominence for women founders in the mainstream media and women product leaders — the problems are not just at the higher echelons of business; they run deep into Indian society.

And perhaps that’s what India’s big focus should be in this decade.