‘BBNow’ is expected to launch in February 2022 and will be available on Tata’s upcoming super app named TataNeu alongside other products such as 1MG, CureFit

BigBasket’s planned entry into qCommerce comes at a time when hyperlocal delivery startups have been fighting it out to gain fresh market share with quicker deliveries as a USP. 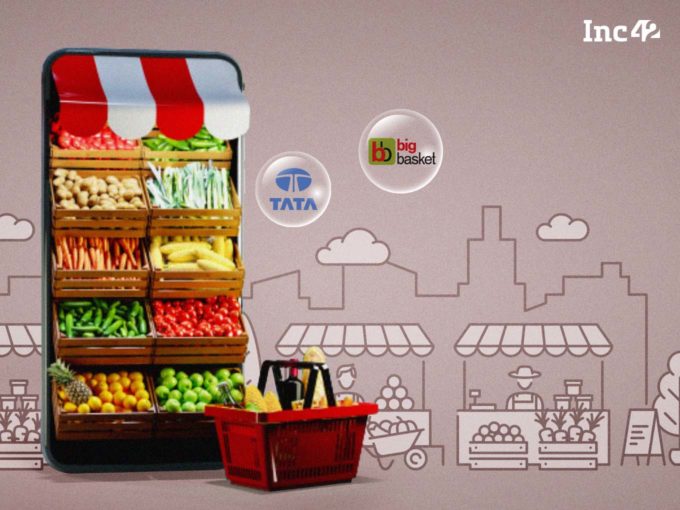 BBNow will feature on Tata’s upcoming super app named TataNeu alongside other products such as 1MG, CureFit, and others, the source said.

In May 2021, Tata Digital Limited had acquired a majority stake in BigBasket where the latter’s valuation had breached the $2 Bn mark.

‘BBNow’ which is currently under development will stock up top-selling essentials which add up to 2,000 stock keeping units (SKUs). The service will utilise BigBasket’s existing dark stores network spread across metropolitan cities, the source added.

“The BBNow app will look to compete with the likes of Dunzo, Swiggy, and Grofers who are currently into quick deliveries. However, BigBasket will not spin off BBNow as a new app, but will integrate within the existing app itself,” said the person quoted above who is aware of BigBaket’s operations.

“Currently, the Tata and Bigbasket team are targeting to get the grocery vertical ready before the end of the year, and they are looking to launch it by February 2022,” said the person.

Interestingly, BigBasket already has a same-day delivery service named ‘BBExpress’ which does deliveries in under 60 minutes. It’s unclear if this service would be rebranded or whether it would continue to exist post the launch of ‘BBNow’.

Bigbasket declined to comment on the story, while Tata did not respond to an email seeking comments until the publication of this article.

BigBasket’s planned entry into qCommerce comes at a time when hyperlocal delivery startups have been fighting it out to gain fresh market share with quicker deliveries as a USP.

Foodtech unicorn Swiggy was the first company to publicise its faster-than-most delivery in the country. The Bengaluru-based company launched the service a month ago and promises deliveries in 15-30 minutes via its Instamart service.

It is currently operational in seven cities, and Swiggy is planning to expand the Instamart hyperlocal grocery delivery to five more cities.  And then Dunzo followed it up by promising deliveries in 19 minutes in Bengaluru through its Xpress Mart dark store network.

A few days after Swiggy’s initial announcement, Gurugram-based hyperlocal delivery firm Grofers also stated that it is planning to launch 10-minute grocery delivery in 10 cities. Grofers said it would use dark stores in residential neighbourhoods to fulfil its delivery promise.

The movement towards quicker deliveries is backed by a changing consumer behaviour after the pandemic forced citizens to stay indoors for a good half of 2020. A report by management consulting firm Redseer estimated the current market opportunity of qcommerce in India at $0.3 Bn in terms of overall GMV in 2021. This is expected to grow 10-15x in the next five years to reach $5 Bn by 2025.

Around 20 Mn Indian households already use online grocery platforms, leading to an addressable market size of $50 Bn. RedSeer says that in metro cities, around 70% of consumer spending on groceries and home consumables is an impulse purchase, further validating the scope for qcommerce in the country.

However, in the crowded grocery delivery market, Bigbasket will have an upper hand with its qCommerce product when it launches as it has already built a large network of fulfilment centres and dark stores which stock more than 50,000 SKUs.

BigBasket currently has operations in 30 cities in India and claims to be recording about 15 Mn customer orders per month. Besides offering groceries including fresh fruits, vegetables and meats, over the years, it has also introduced several private label products.

BigBasket in multiple instances had experimented with its network of dark stores to try and cut down on delivery timings much before the current qCommerce rush. In September 2019, BigBasket had rejigged its operational model to make all deliveries under four hours, after initially experimenting with 90-mins delivery in early 2019.

At that time, Bigbasket CEO Hari Memon told the press that it had already moved from smaller, dark stores to opening warehouses that are “three times larger” and also re-hauled its supply chain across cities to fulfil the majority of customer orders.