EESL plans to procure EVs For commercial use

Blu Smart is the startup of the week 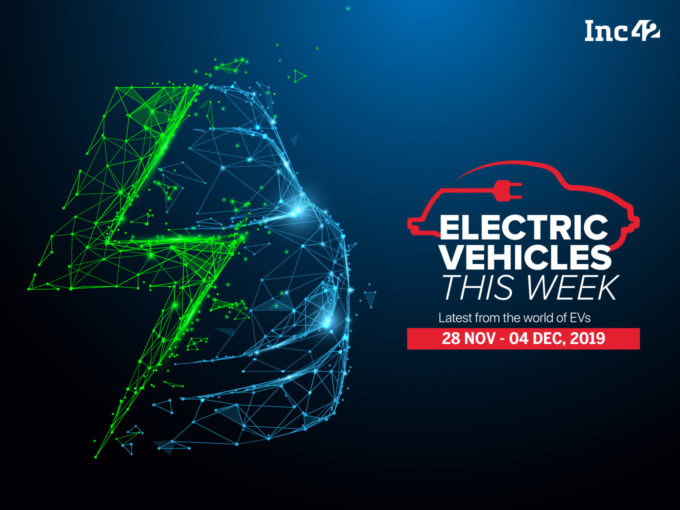 State-run Energy Efficiency Services Ltd (EESL) is planning to procure 200 luxury electric vehicles (EV) priced around INR 25 Lakh. The government body plans to lease out these EVs to private cab aggregators Ola, Uber and Blu Smart for commercial purposes. With this move, EESL is looking to promote emobility, while generating a demand for it through central ministries and public sector undertakings.

The reports suggest that the government will lease out 50 of these luxury EVs each to Uber and Ola. Whereas, Actress Deepika Padukone-backed Blu Smart, which is an exclusive electric cab service, will be infused with 100 luxury EVs procured by EESL. The government is reportedly planning to float the tenders in January 2020 to procure the EV.

South Korean automobile company Hyundai has committed to invest $17 Bn over the next six years to speed up the emobility transformation in India and create lower-emissions, battery-powered vehicle. In addition, Hyundai will also invest around $1.3 Bn in autonomous vehicle platforms.

Ola Electric has raised $14.8 Mn from South Korean automobile maker Hyundai and its affiliate Kia Motor to build India specific electric vehicles (EV) and boost the Indian emobility ecosystem. The funding was part of a larger funding round, where Hyundai and Kia invested $311 Mn in Ola Electric and its’ parent company ANI Technologies. ANI Technologies got $297 Mn in this deal.

Maruti Suzuki has once again spoken about its reservations about the adoption of electric vehicles (EV) in India. Maruti Suzuki’s chairman RC Bhargava, in an interview, said that the emobility in India still needs two to four years to gain prominence and become popular among customers. He added that special attention should be given to the affordability of vehicles.

No Need For License To Run Charging Stations In Andhra

The Andhra Pradesh government has decided to delicense EV charging stations across the state. The government believes that by simplifying the procedure, it can easily boost the electric mobility infrastructure in the state. Now any individual or entity can install charging stations for EVs in the state without applying for a license, unlike the licensing requirement for petrol pumps and CNG stations.

South Korean carmaker has been making headlines this week for its emobility initiatives. On December 4, Hyundai launched Vehicle to Vehicle (V2V) charging facility that will allow Hyundai EV owners to charge their vehicles by connecting it to other vehicles anytime, anywhere.

German luxury carmakers, Mercedes and Audi are planning to launch their electric vehicles in Indian by 2020. However, giving up on their luxury segment, the company will push for greener mobility.

Startup Of The Week: Blu Smart

Founded  in 2019 by Puneet Singh Jaggi, Anmol Singh Jaggi and Punit K Goyal, Blu Smart was launched in January this year as an electric cab-hailing platform. Then in June, the company decided to change its stance to offer subscription-based car rentals and ride-sharing on both electric cars and bikes. The platform is also working on shared electric vehicle (EV) charging infrastructure across Delhi NCR.

Till now, the company has served over 20K customers in Delhi and aims to target 1Mn in the coming months. In June, it also partnered with Mahindra Electric to infuse 70 Mahindra eVerito premium sedans into its fleet. Later, the company planned to add over 500 Mahindra eVerito units by April 2020 and also enter Mumbai and Pune.

So far, the company has raised over $5.2 Mn from Bollywood Actress Deepika Padukone’s Ka Entreprises, JITO Angel Network and Rajesh Agarwal. With the investment, the company is planning to add 15K electric cars and 2500 chargers on its platform by 2021.

Auto Makers Lay Off Workers To Make Room For EVs

According to a Bloomberg report, automakers are planning to let go of 80K auto jobs in the coming years to pay more attention to emobility. United States, Germany, and the United Kingdom are reportedly going to be the major source of the layoffs. Automobile makers like Audi and Daimler have already announced their plans to lay off over 9,500 and 10K employees, respectively.

As the Chinese automobile market is in losses and the government has reduced subsidies on EVs, Investors in the Chinese EV market are facing a major slowdown when it comes with its investment’s returns. Investors like Jack Ma, Pony Ma, Hui Ka Yan and Robin Li, who have played a major role in the $18 Bn investment in the EV market, are in danger of their investments turning to losses.