Important Happenings From The World Of Cryptocurrency, Bitcoin, ICOs And More [17 - 23 June] 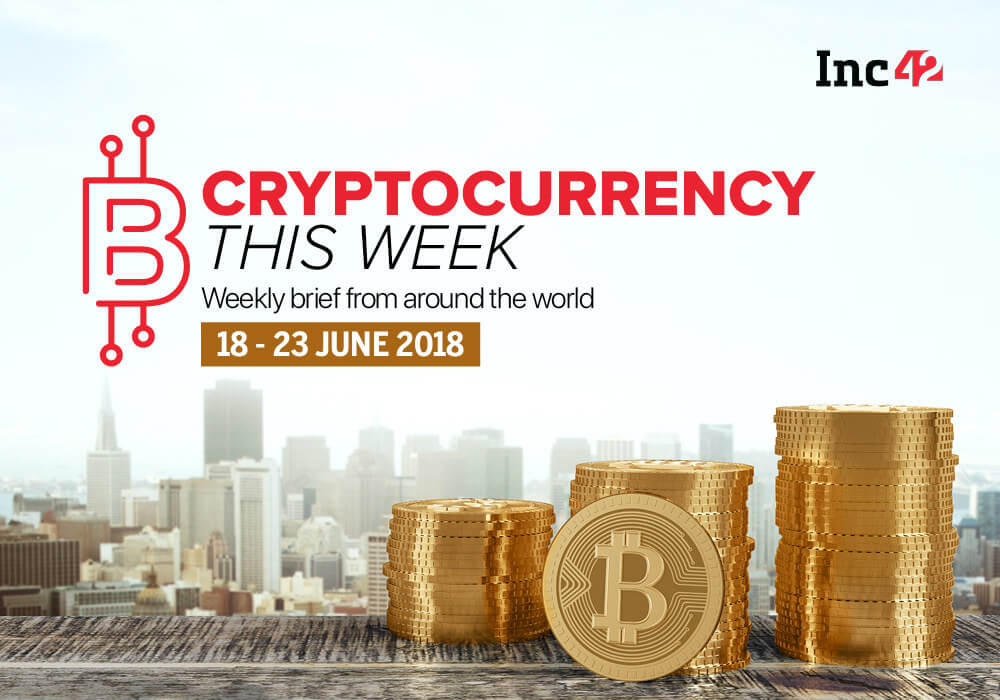 Notwithstanding the Bitcoin hype, the cryptocurrency, having called the GOAT currency by many, has been performing as Messi in the FIFA world cup.

And, as the entire world is under the world cup fever, similar to the soccer teams, where the individual performances: be it Messi or someone else are complementary in nature, there has been a series of developments across the world which forced Bitcoin to lay low for the time being.

As RBI’s ‘crypto’ circular will be fully effective from July 5. Due to this, the Indian cryptocurrency traders will find it hard to continue the trade despite having few choices likely remain available even after that.

It’s not only a matter of India but in many countries across the world. As per reports, a Bitcoin broker Eircoin has now accused Banking and Payments Federation of Ireland of discriminating against the accounts of crypto-related companies. Eircoin’s co-founder Dave Fleming claimed that the company was closed “due to a negligent and defensive banking system” on false and ungrounded accusations of illegal activities.

In other news, the Syscoin project team announced on the official Github page that the project’s official client had faced a malicious trojan attack (windows).

India aside, as popular singer Akon launches his own cryptocurrency called Akoin, there are a lot more interesting developments for the cryptocurrency enthusiasts to track this week. Take a look!

India: The Major Roadblock Ahead

Indian Central Bank, the Reserve Bank of India’s (RBI) crypto circular, dated April 6 which had given the payment companies and banks, a 3-month window to end their dealings with all the cryptocurrency entities will come to an end on July 5.

As a result, it will be almost impossible for a cryptocurrency exchange, wallet to provide Rupee-to-cryptocurrency transfers and vice versa. And, the Indian crypto community is still not very excited with the crypto-to-crypto tradings.

A number of cryptocurrency exchanges, enthusiasts have already knocked the door of various courts asking for a stay on the circular. However, the Supreme Court of India has now directed the SC Registry to register the mentioned transfer petitions and to issue a notice fixing a returnable date within six weeks.

As the Supreme Court of India has already refused to issue a stay order against the RBI circular, and the next hearing will be on July 20, this simply implies, the Indian cryptocurrency exchanges have hardly any choice left but to shut down their rupee-to-crypto transactions and wait for the Supreme Court’s rulings as well as the Subhash Chandra Garg-led committee report on the regulations on cryptocurrencies in India.

Zebpay, leading cryptocurrency exchange/wallet operator has already issued a warning/notice on its website, stating, “As per a recent RBI action, banks have been told to discontinue banking services to those dealing with virtual currencies. While our industry is challenging this legally, the outcome is beyond our control. Hence, if you are holding any rupees, or depositing any rupees in Zebpay, there could soon come a time when we may not be able to honour withdrawal requests. Please continue only if you understand this risk.”

While blockchain is fast booming here, India lags far behind in the crypto race across the world. And, huge investments continue to pour in the cryptocurrency startups in many other countries.

Commenting on the investment, Mike Novogratz, CEO and Founder of Galaxy Digital Ventures stated, “We are in the early stages of a fundamental transformation in financial markets due to the digitization of assets. This transformation started with currencies but is now changing the way we look at commodities, real estate, art, and other traditional and emerging asset classes. We are excited to partner with AlphaPoint as we continue to help drive this revolutionary change in digital markets.”

Being a creative innovation, Bitcoin, Ethereum, and other cryptocurrencies have caught the attention of the artists and art lovers around the world. Now, a painting by Benjamin Katz, a mixed media artist based in New York, just sold for the staggering sum of 150 Bitcoins, worth roughly $1.25 Mn. As per the reports, the painting was sold by Ato Gallery, an online gallery, and the entire deal was carried out through modern messaging apps, such as Instagram, Signal, and Postmates.

At a time when Bitcoin is biting the dust at $6K, this is certainly a good and a welcome news among the cryptocurrency lovers.

Now, passengers at Amsterdam Airport (Schiphol) can exchange their leftover Euros for Bitcoin or Ethereum at a ‘Bitcoin ATM’.

A Bitcoin ATM has been installed on a trial basis at the Amsterdam airport, which is the first European airport to provide such service to the passengers.

Anja Dik, director of Consumer Products & Services at Amsterdam Airport Schiphol stated, “Schiphol is constantly looking for ways to innovate and provide optimum service to passengers. With the Bitcoin ATM, we hope to provide a useful service to passengers by allowing them to easily exchange ‘local’ euros for the ‘global’ cryptocurrencies Bitcoin and Ethereum. That can be beneficial if, for instance, it’s not possible to spend euros in their home country.”

$1 Bn Bitcoins Lost in Mt. Gox Hack To Be Returned To Victims

A Japanese court passed a ruling on Friday to pull infamous Bitcoin exchange Mt. Gox out of bankruptcy, opening the door for at least $1 Bn worth of cryptocurrency to be paid back to the company’s former customers, reported Fortune.

It has been more than four years since the great fall of Mt. Gox and the creditors were completely unsure if and when they could ever expect refunds. Meanwhile, the value of their recovered assets soared to more than $4 Bn, last year in November.

Upon investigation, the Syscoin developers found that a malicious, unsigned copy of the Windows Syscoin 3.0.4.1 installer was made available via the Syscoin Github release page on June 9th, 2018 due to a compromised GitHub account. This installer contained malicious code (Trojan:Win32/Feury.B!cl)

In other news, as the cryptocurrency market cap is now down to $250 Bn, Peter Thiel, the Paypal founder, one of the biggest names in the startup ecosystem, who also happened to be the Facebook’s first investor (from outside) and Y Combinator partner, has now stated that there is 50-80% chance that the prices of Bitcoin will go down.

The price will go down to the extent that it will make the virtual gold useless in real world, he said.