• The three-judge bench heard limited arguments today
• SEBI and some other parties are yet to file their arguments
• The court has listed the matter on September 11, for the final disposal A three-judge bench of the Supreme Court of India has set the next and probably the final hearing date for the cryptocurrency case (related to the RBI circular dated April 6) on September 11.

Speaking to Inc42, Rashmi Deshpande, associate partner, Khaitan and Co, the advocate in this case for one of the petitioners — Kali Digital — said, “The Supreme Court is likely to dispose of the case on September 11, after hearing the arguments from both the parties.”

Limited arguments were advanced on behalf of IAMAI and RBI today. Since Sebi and a few others have not filed their response to the petition seeking regulation, so the Court directed for completion of pleadings. Final arguments are expected to come on September 11. 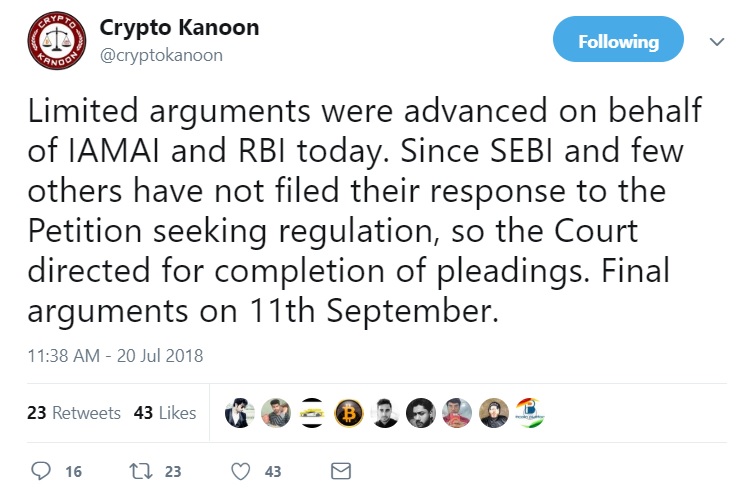 Gopal Subramaniam, senior advocate representing the IAMAI, submitted that in the world of digitalisation, such a circular from the RBI would be a loss for Indian users as well as Indian market.

Abhishek G, co-founder and CEO of Indian cryptocurrency Exchange ThroughBit, who was also present during the hearing commented, “The bench seemed receptive. We hope to get a longer hearing from the bench on the next hearing.”

Earlier, on July 3, the Supreme Court (SC) of India had refused to grant a temporary stay on the RBI’s banking restriction on cryptocurrencies.

As cryptocurrency firms, enthusiasts, and organisations moved various courts against the RBI circular dated April 6, the Supreme Court (SC) of India, upon hearing a related case, had directed to club all the petitions pending across various courts in this regard.

The Supreme Court had also refused to put any stay on the RBI circular, till the matter is under sub judice.

Right after the RBI circular, petitions were filed across the country, and while clubbing all the cases together, the Supreme Court had then stated that each and every party in the case will get their fair share of chance to put forward their arguments.

However, according to today’s (July 20) limited hearing, this may not be the case as the apex court is set to dispose of the case on September 11.

After the RBI Circular, many other countries’ central banks such as of Zimbabwe central bank and Pakistan also issued similar circulars.