Important Happenings From The World Of Cryptocurrency, Bitcoins, ICOs And More [1 - 7 October] 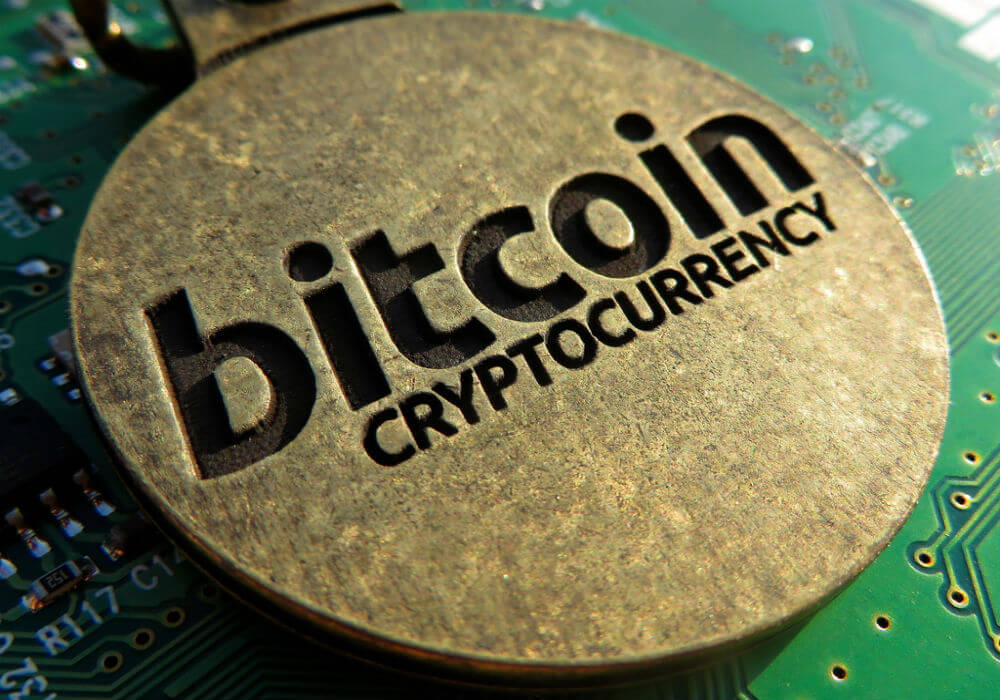 Bitcoin.org, the founding and parent organisation of Bitcoin cryptocurrency has decided to denounce Segwit2x development. Founded by Satoshi Nakamoto, the organisation has published a post warning users about the risks of using services that will default to the Segwit2x1 (S2X) contentious hard-fork. Post Segwit8x hard-fork, Bitcoin developers and miners were largely in favour of Segwit2x.

For Bitcoin enthusiasts, there is good news too. While China is considering to resume Bitcoin trading, Brazil’s largest brokerage XP Investimentos has filed a patent on the brand XP Bitcoin. In Brazil, the step is being seen as legitimising Bitcoins and recognising cryptocurrency as the ultimate futuristic currency. Meanwhile, more banking veterans have joined the Bitcoin controversy which at the end of the day nothing but adds to Bitcoin’s increasing relevance.

Dubai Unveiled Its Own Cryptocurrency emCash

In a major development in the world of cryptocurrency, the government of Dubai has revealed that it will develop and roll out its cryptocurrency called emCash. Like Bitcoins, emCash will be an encrypted blockchain technology-based digital currency; however, unlike Bitcoins, people of Dubai will be able to use emCash to pay for every service out there.

On launching emCash, Ali Ibrahim, Deputy Director General of Dubai Economy said, “emCash will mark a giant leap for the city in harnessing game-changing innovations to improve ease of business and quality of life. We are delighted to have Object Tech as our partner in this initiative along with the Dubai Economy Accelerators programme.”

The Department of Dubai Economy and Development has released a press statement announcing the partnership between government’s Emcredit, a subsidiary of Dubai Economy, and the UK-based Object Tech Grp Ltd together under the Dubai Economy Accelerators umbrella to develop and implement emCash. The cryptocurrency will be based on the latest blockchain technology. Emcredit will also launch its own digital wallet emPay to enable the emCash transactions and currency conversion facilities.

Muna Al Qassab, CEO, Emcredit Limited said, “Customers can choose between two payment options on the emPay platform – the existing dirham payment or emCash. While the dirham payment goes through normal settlement procedures, intermediaries and costs, emCash payments are settled directly between the user and merchant. emCash thus gives real-time value movement and merchants can pass the cost benefit to the emCash holder. It also reduces fraud as well as inflation since currency is issued in real time based on actual demand,” explained Al Qassab.

Russia’s Central Bank In Favour Of Its Own National Cryptocurrency

Like the Reserve Bank of India, the Russian Central Bank is also considering to develop its own national cryptocurrency ‘CryptoRuble’; however, the bank is completely against legalising Bitcoin payment transfer.

Speaking to the press during Finopolis Forum of Innovative Financial Technologies Deputy Governor of the Central Bank of the Russian Federation, Olga Skorobogatova said, “The creation of a national cryptocurrency stimulates the growth of non-cash payments and electronic payments, including, possibly, cross-border payments.” First Deputy Prime Minister Igor Shuvalov has also spoken, supporting the idea of CryptoRuble.

In a separate news, Russian social networks are abuzz with “Smart-looking Gypsies selling fake Bitcoins.” People have bought these Bitcoins look-alikes for thousands of Rubles which later appeared fake. An Obninsk resident has posted, “Respectable-looking gypsies are selling Bitcoin outside the department store on Aksenov Street. My husband bought two for 1000 rubles, came home and they turned out to be fake and it’s not possible to sell them.” 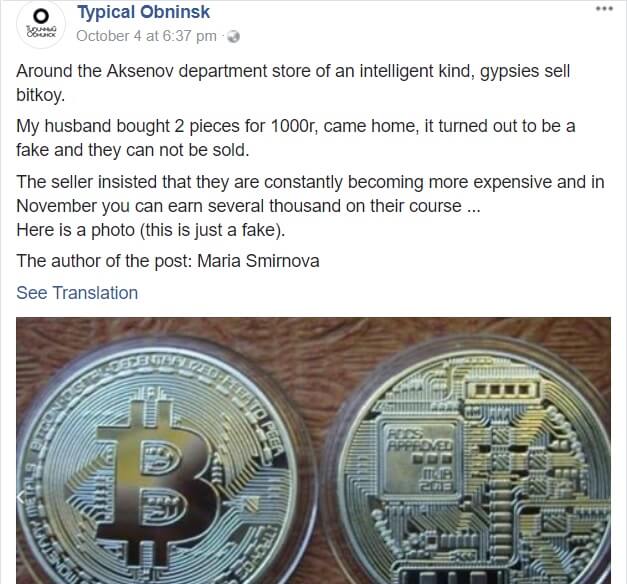 The ICOs ban imposed in China has now created a Cobra effect, a bigger headache for the Chinese regulators. The ban has led Chinese miners and developers to trade their cryptocurrencies in the grey market. The Chinese government is concerned about the cryptocurrency’s power to create a parallel and underground economy, according to the Chinese state-owned news publication Xinhua. 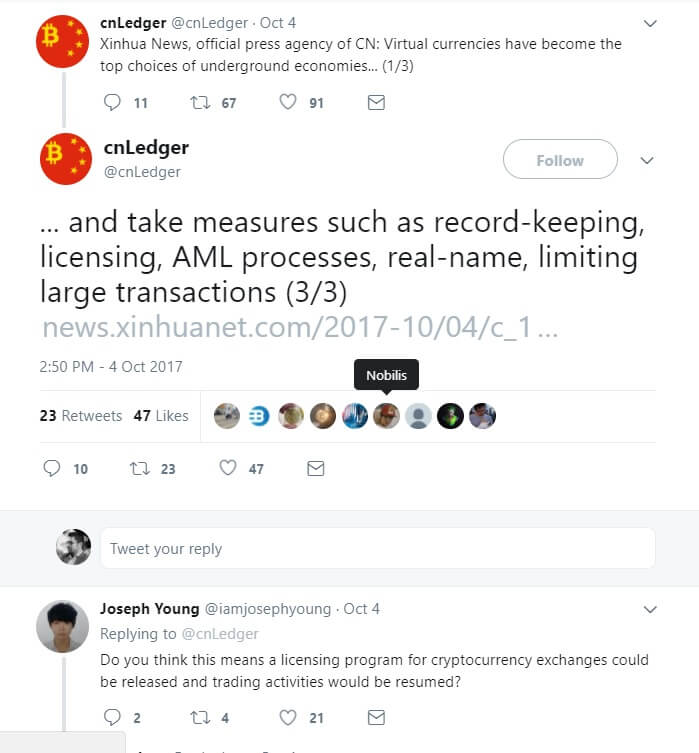 The government is likely to resume the trading once the cryptocurrency regulation law will be in place. This includes incorporating Know Your Customer (KYC) and Anti-Money Laundering (AML) systems.

Since the Chinese Mainland regulators have banned ICOs resulting in the closure of leading Bitcoin exchanges, the majority of Bitcoin trading has shifted to Japan and South Korea. With Japanese government extending full support to Bitcoins, the currency soon recovered from the dip; however, the Chinese economy might get adversely affected by the move.

Speaking to an Austrian Weekly Trend Report, the ECB council member, weeks before the ECB meet to decide on the future of the quantitative easing program, said, “Bitcoin is not a currency, it is highly speculative and volatile, it is not subject to any supervision either, and the stock market movements of the recent period make it clear.” However, Nowotny also disclosed that ECB is eyeing to regulate ICOs by putting “concrete legal restrictions in place,” according to Bloomberg.

Amid all bankers jumping on the Bitcoin future, Goldman Sachs CEO Lloyd Blankfein has tweeted, “Still thinking about #Bitcoin. No conclusion – not endorsing/rejecting. Know that folks also were skeptical when paper money displaced gold.”

Still thinking about #Bitcoin. No conclusion – not endorsing/rejecting. Know that folks also were skeptical when paper money displaced gold.

Lloyd’s reaction followed a recent development this week. According to a report by Wall Street Journal, Goldman Sachs is considering to launch a dedicated Bitcoin trading operation, which created a lot of buzz across media and social networks.

Meanwhile, Ian Telfer, the Goldcorp Chairman made the biggest claim. Speaking about the Bitcoin value in future, Ian said, “It will go to zero. I don’t think it’s stealing gold’s thunder,” he said. “Longer term, I am personally not sure how these cryptocurrencies are going to work and I’m not sure governments are going to let them exist.”

Another new joinee to the Bitcoin bashing community is UBS Chairman and former president of Germany’s central bank Bundesbank Axel Weber. Speaking at a financial conference in Zurich, Weber claimed, “Bitcoin does not fulfill the functions of a currency.”

Regardless of all the controversy and bloodbath, there is enough indication that people’s ‘private currencies’ like Bitcoin, Litecoin, and Ethereum are going to stay even if countries like India, UAE (Dubai: emCash), China and Russia introduce their own official cryptocurrencies. This is because, at the same time, Bitcoin is also being backed by other countries like Japan. China might legitimise Bitcoin trading soon. After all, Bitcoin is the only asset/cryptocurrency in which an investment of $100 made in 2014 has now led to a $75 Mn profit. The fascination will, thus continue.