But given the slew of controversies involving Grover in recent months, it would appear that the cofounder has been ousted after a board decision

Between allegations of abusing and threatening Kotak Mahindra Bank employees, social media outrage over some of his comments to founders on Shark Tank India and an alleged spat with key investors and board members, BharatPe cofounder Ashneer Grover has taken a leave of absence from the company till March 2022.

In an official statement, BharatPe said, “For now, the Board has accepted Ashneer’s decision which we agree is in the best interests of the company, our employees and investors, and the millions of merchants we support each day.”

In another report, BharatPe CEO Suhail Sameer said Grover wanted to resolve his tussle with Kotak Mahindra Bank amicably without any impact on BharatPe. He added that Grover continues to be the board member but is not going to get involved in day-to-day operations. Grover also posted on LinkedIn that he will be back from leave on April 1, 2022. 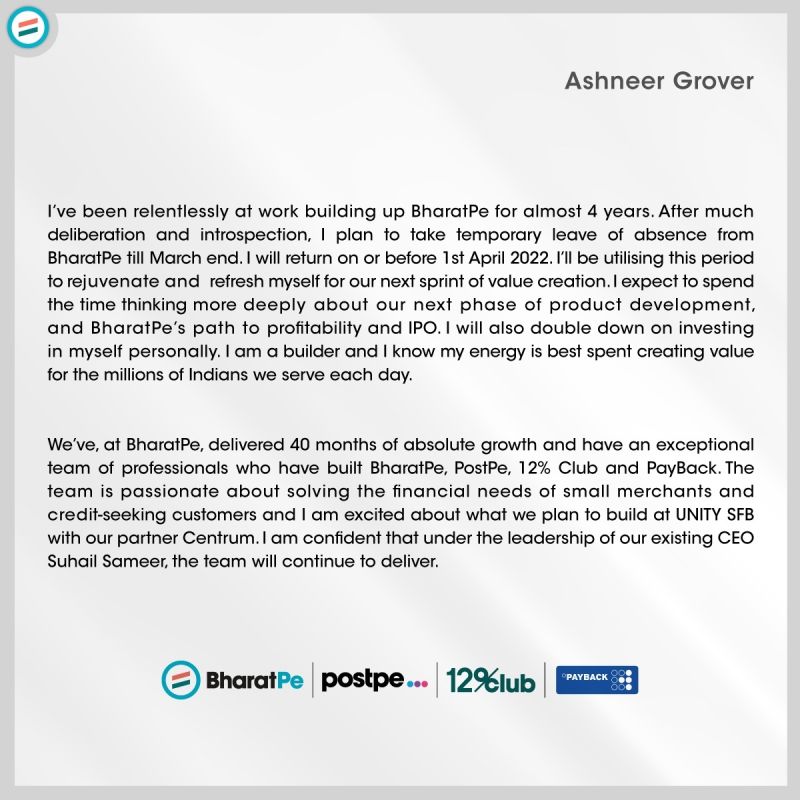 Given the slew of controversies involving Grover, it appears that the cofounder has been ousted from the company after a board decision.

While the company says it was Grover’s ‘decision’ that the board agreed with, as is typical with high-level oustings — particularly, founders — dismissal announcements are carefully manicured to protect reputations on all sides.

For instance, in 2018, ICICI Bank CEO Chanda Kochhar was asked to go on indefinite leave during an independent enquiry into alleged cases of impropriety involving her. The decision to ask Kochhar to go on leave was taken by the bank’s board after much public pressure.

On a related note, an ET report this week claims that in August 2020, Grover was also involved in heated email exchanges with the company’s lead investor Sequoia Capital. Sequoia invested in two rounds for BharatPe since those email exchanges, and the VC giant claimed that any issues with Grover were eventually resolved soon after those emails.

The bigger questions in the wake of the controversy are around corporate governance and how a culture of a company impacts its public perception. We’ll unpack these questions and more, but first let’s understand what actually went wrong over the past few months at BharatPe.

Arguably, the biggest factor behind this apparent ousting is the potential of a big lawsuit impacting Grover personally. Grover had sent a legal notice to Kotak Mahindra Bank last year accusing the bank of failing to secure financing and allocation of shares in the hugely successful Nykaa IPO, despite allegedly indicating that it could provide the financing.

Grover and his wife Madhuri Grover are seeking damages worth INR 500 Cr. The duo sent a legal notice in October 2021 to Kotak Mahindra Bank’s MD and CEO Uday Kotak, as well as other upper management employees of the bank and its wealth management, consumer banking and corporate, institutional & investment banking divisions.

The legal notice, which Kotak Mahindra has responded to, surfaced a week after a leaked audio clip in which Ashneer Grover is heard hurling abuses and threats. His wife Madhuri Grover is also heard on the alleged recording of the call (which is now deleted).

While Grover had claimed that the clip is fake and part of an extortion scheme, Kotak Mahindra Bank’s response, which says that the bank had placed on record Grover’s abusive language, seemingly authenticated the clip.

Soon after Kotak’s response was publicly disclosed, there were murmurs of emergency board meetings at the company, and then reports about Grover’s past run-ins with investors.

Then, reports this week claimed that Grover had already gotten into a heated argument with Sequoia Capital’s Harshjit Sethi in August 2020. The argument began over delays from Sequoia in committing to BharatPe’s Series B, which already had commitments from other investors.

Grover had reportedly asked that Sequoia exit the company’s cap table since it had not clearly committed to investing in the company.

Sequoia did not invest in Series B or Series C rounds for BharatPe, but then was back as an investor when BharatPe raised its mega $108 Mn Series D, and $370 Mn Series E funding rounds, which took the company’s valuation to nearly $3 Bn.

The two massive rounds in 2021 indicate that any issues between Grover and Sequoia were ironed out, but in fact, Grover was replaced as CEO of the company by Suhail Sameer in August 2021 when the Series E was announced.

Sources told Inc42 that, at the time, Sequoia’s investment in BharatPe came with the condition that Grover stepped aside from the CEO role.

If indeed Grover had the leverage over Sequoia in past negotiations, he seems to have exhausted it after the two mega rounds and the email showdown.

Further, CEO Sameer said that Grover will be back at BharatPe after March. But there are other challenges for the Delhi-based fintech company too. Losing a founder and a key leader in such a public way amid a series of controversies is likely to impact its standing in the market.

Besides, Grover is the public face of BharatPe. Even though the company has a cofounder in Shashvat Nakrani, Grover is the one who is seen as the brand’s ambassador in the startup ecosystem. Incidentally, Grover still owns 9.5% stake in BharatPe, while Nakrani is said to have a stake of 7.8%.

Grover’s wife Madhuri Grover is the head of controls at the company, responsible for ensuring operational and financial standards and other internal compliance.

Before starting BharatPe, Grover had been the chief financial officer at Grofers (now Blinkit) besides other roles at banks and a brief stint at PC Jewellers. Incidentally, Grover has been associated with Kotak Mahindra for over 15 years. Besides this, he is a prominent angel investor with over a dozen startup investments.

Grover is one of the more outspoken personalities in the Indian startup ecosystem, and has pretty much been among the headlines for some provocative statements. Last year, he criticised Paytm and its founder Vijay Shekhar Sharma over the fintech giant’s IPO. Before that he has been criticised by some entrepreneurs about the material perks promised to BharatPe employees.

Even in his latest role as an investor on the India edition of Shark Tank, which launched in December 2021, Grover has been the subject of memes and comments on social media after his interactions with some founders who pitched on the show.

Of course, there’s a whole lot of difference in the public persona of a high-profile founder and their interactions in private. But reports in the past have indicated that Grover has a heavy-handed approach to management, and even though the company had hired many key people in leadership roles, Grover had the final say on pretty much everything.

Ex-employees of the company have complained about toxic work culture including employees being forced to work from office during the Covid lockdown. The company is involved in a lawsuit against PhonePe over the usage of the suffix Pe in the brand names.

But that’s not the biggest problem when it comes to BharatPe.

There are of course plenty of questions for BharatPe too. Besides the controversy surrounding Grover, other reports this week claimed that Bhavik Koladiya, a former cofounder of the company and currently the group head of product and technology, was convicted in a credit card fraud case in the US.

Koladiya and Nakrani had originally founded BharatPe, while Grover joined in as cofounder after investing in the company during an early round in 2018.

While Koladiya’s conviction in the US in 2013 does not mean that he cannot invest in companies or be a director or a senior employee, whether the fraud conviction was disclosed to other investors or indeed Grover at the time of his investment is unclear.

Secondly, the fact that Koladiya is responsible for the technology of a financial services platform is another major red flag in BharatPe’s operations. It is also unclear whether Koladiya had access to sensitive information belonging to merchants and shoppers.

BharatPe claims to be serving over 60 Lakh merchants across 100 cities, with annualised transactions processed value reaching $10 Bn+. The company says it has already facilitated disbursement of loans totaling to over INR 1,600 Cr to its merchants since launch.

Now that BharatPe has acquired a small finance bank licence in a joint venture with Centrum Finance, it cannot afford corporate governance slip-ups such as this.

In preparation for the Unity SFB launch, BharatPe had added former SBI chief Rajnish Kumar, as its chairman, adding an industry veteran to its board. Yet this has not solved some of the larger corporate governance issues.

Will there be more repercussions for BharatPe in light of the allegations against Grover? For one, there could be a major overhaul and restructuring in the top management of the company. In fact, there’s likelihood of a big clean-up as that’s something that usually happens soon after major exits, most notably at Flipkart in 2017.

And where does Ashneer Grover go from here after having to sit out of his pet project? Will he turn into an investor primarily or will we see another venture from this mercurial entrepreneur?