Edtech is touted as the future, but teachers sing a different tune this Teachers’ Day

I don’t know about you, but when I recall my school days, I tend to picture my teachers as being zen and calm. There’s chaos all around them (obviously heightened in my imagination), but time stands still for the teacher — at least the best ones — and they could wrangle any situation before it got out of hand. The last year has been anything but calm.

It’s been over a year since the pandemic began and life changed for teachers in India and around the world. With no end in sight yet, we might not go back to the normal when it comes to school for a while.

Even as schools reopen this week in parts of the country, there are limits and restrictions in place, which makes reopening precarious. Schools will be required to shut down if there are any cases, which will be followed by contact tracing and other measures, according to the official rules in various states where schools have reopened.

As India gets ready to celebrate educators on Teachers’ Day 2021, we look into questions and concerns about the tech readiness of the teachers that are the heart and soul of all learning. While edtech products and services grew tremendously, they did not reach every corner of India, forcing teachers to step in and solve the gaps, but also resulting in burnout.

Now with hybrid learning being billed as the future of education, will physical schools play second fiddle to online learning — and are teachers even ready for this brave new future?

The Toughest Year For Teachers

Till September this year, most teachers have not been in the classroom in nearly 18 months. Those 18 months were full of trials and challenges. For one, overnight teachers had to equip themselves with technology and acquaint themselves with teaching virtually. For some, it came naturally, others struggled with online teaching.

But teachers are not just that — they also manage households and families, particularly the female teachers. According to official data, India has 96.87 Lakh teachers in more than 15 Lakh schools catering to the educational needs of over 26.5 Cr students. More than half of this base is female teachers.

S Dhilip, a national award-winning teacher from Villupuram, says he has never seen so many teachers struggle as he has in the past year, because of the amount of effort that went into upskilling themselves. Across the country, the story is the same. Teaching is a thankless job in many places in India and it didn’t get any easier in the pandemic.

Dhilip’s specialisation is integrating technology into the classroom and the school system, so he was able to drive the adoption of tech among teachers, but many teachers could not keep up with the upskilling efforts and do their teaching duties, while also managing their homes.

“We forget that ultimately most of our teachers also run the home. With their families also home, it was really difficult. I have never seen teachers burnout before, but this is something I witnessed this year,” he told us.

The challenging transition to online learning has definitely taken a toll on the mental health of teachers. In the bigger schools, there is a support system in place for teachers even in the times of virtual learning, but in smaller schools and districts, many teachers at the primary level are struggling.

Lack of technology infrastructure and resources such as textbooks, smartphones, PCs and tablets or even electricity in many places meant that online learning was not as penetrative as many might have hoped. It also brought up challenges in teaching methodology and adversely affected outcomes.

Making children learn is not much of a challenge, as connecting with them. And that still continues to be a challenge. “Normally when we were in the class, we would look at the child and read their body language. We are trained to take up the cue as part of training processes, but all of that has gone off the window,” said Sameer Arora, vice-principal of Legacy School in Bengaluru.

Teachers Grapple With The Digital Divide

Arora’s school, like many others in metros, had already been using technology to deliver lessons and track progress, among other uses. But that’s not the case in smaller districts where access to devices is a big problem, even if mobile internet has solved connectivity to a large extent.

An Annual Status of Education Report (ASER) survey conducted in October 2020 on 118,838 households found that 11% of these families bought a new phone since the lockdown began. More than 80% of these new phone purchases were smartphones. Of those who had no smartphone at home, about 13% said their children had access to someone else’s smartphone.

Teachers stepped in and drove the adoption of technology among students who could not cross the digital divide, by going the extra mile. 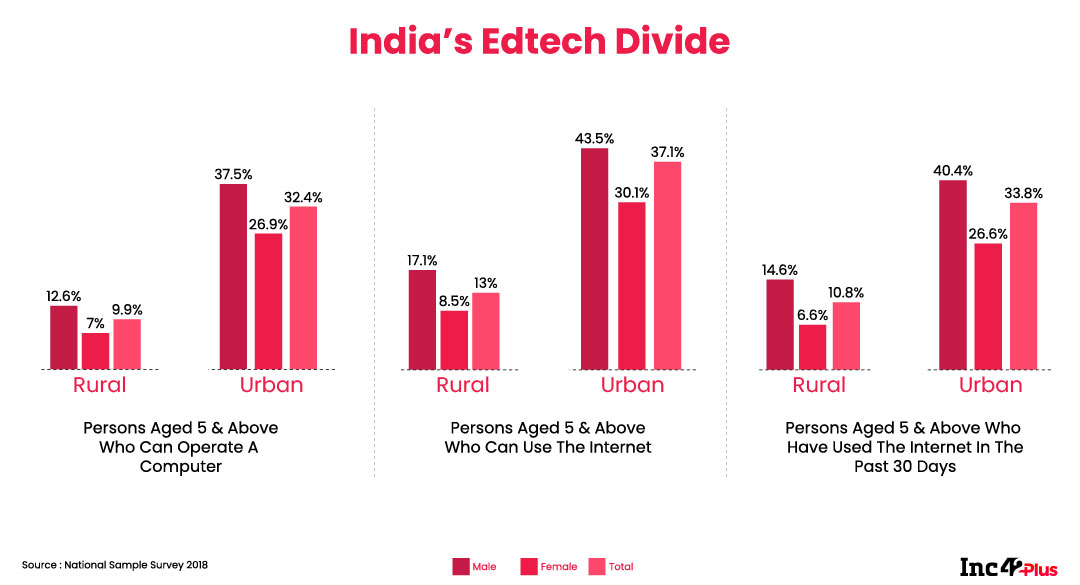 While edtech startups focussed on growing their bases during the pandemic, teachers did the leg work. They prepared the presentations and the interactive learning material for students on a daily basis, converting textbooks into online guides, while also managing their other official responsibilities. Many sent SMS text messages in addition to using WhatsApp and phone calls to deliver lessons wherever possible.

In Tamil Nadu, teachers went from home to home to solve challenges of access or connectivity, while in Rajasthan, Maharashtra and other parts of India, teachers held late night classes to accommodate those students who could not access a smartphone or PC during the day. And now with schools reopening, teachers will have to be ready to jump back to online learning at a moment’s notice in case of a third wave or a spurt of infections in their cities.

“We were available for children all the time. After school hours, we created safe spaces where children can share with us what they’re feeling and experiencing. But all this comes at the cost of the teacher’s mental health. All of us were so focused on the students, that we didn’t think that in the process we also needed to look after ourselves, so there was burnout,” Arora said, recalling that even the most seasoned teachers faced challenges in such a situation.

Most teachers we spoke to were critical of edtech startups and giants such as Unacademy, BYJU’S and others, saying they never addressed the root issues before looking to expand their customer base. The edtech sector has four unicorns now with upGrad and Eruditus joining BYJU’S and Unacademy this year.

This week, BYJU’S belatedly released its financials for FY20, ending in March 2020, just before the pandemic. It reported a net profit of INR 51 Cr in FY20, but its expenses (INR 2,383 Cr) were up 80% in the year. The largest chunk of expenses came from advertising and promotional costs which almost doubled during the fiscal year. It will be interesting to see how this has grown in the 18 months since then.

Edtech companies have looked to fill the gaps as much as possible. As schools reopen, BYJU’S has launched a new two teacher tutoring model which has one subject matter expert driving the class and second one for solving doubts in real-time. Cofounder Divya Gokulnath, who has been a teacher before launching BYJU’S, told us that this mimics the natural environment of a classroom more closely, where teachers are juggling both roles. The idea is to use such models for higher engagement. 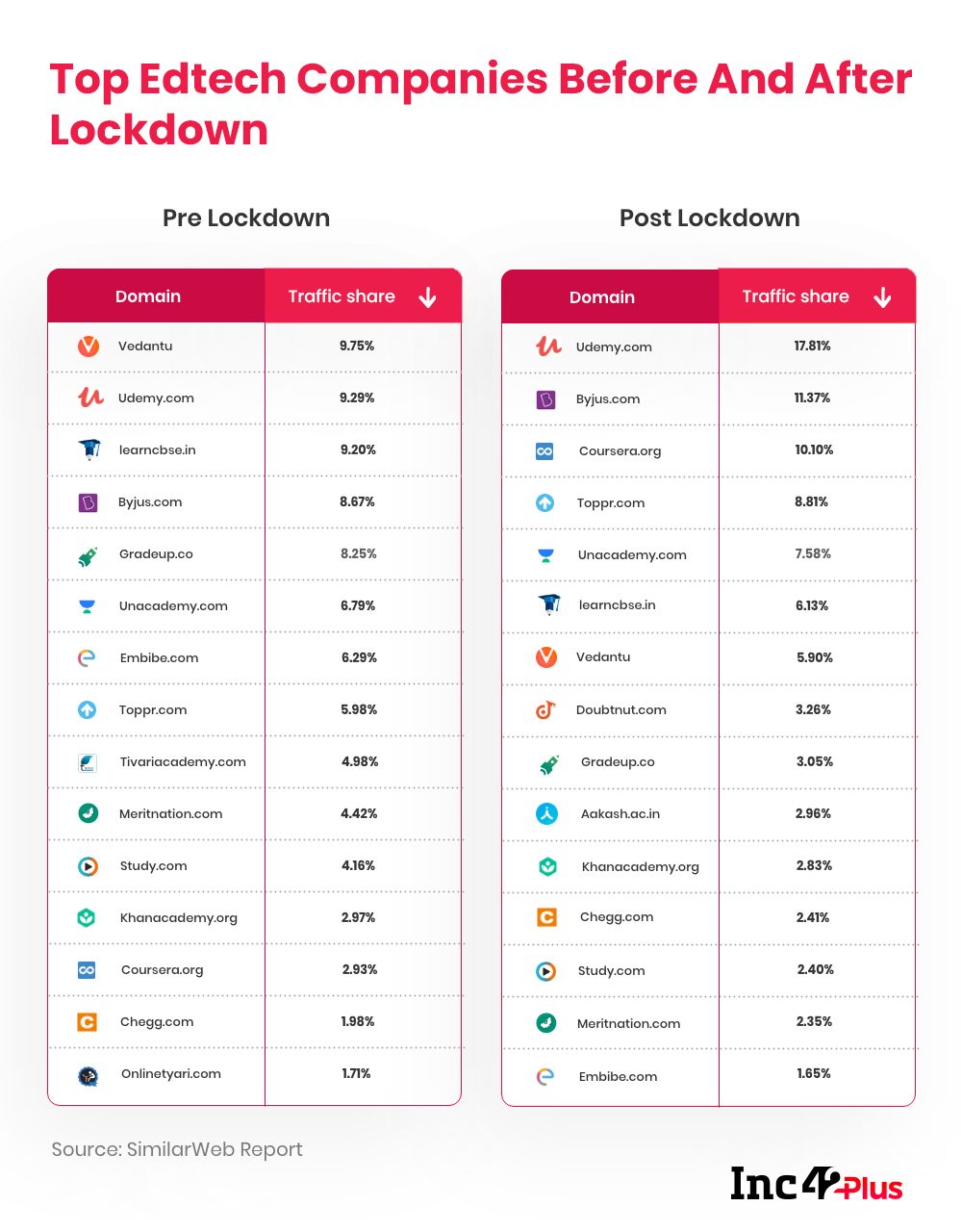 But learning cannot happen online only. Technology cannot replace teachers — this was perhaps the only statement that was common between the half a dozen teachers and startup founders we spoke to. Even Gokulnath acknowledged that blended learning is the future, where certain subjects can be online only, while others need physical classrooms or centres. She called teachers frontline workers, saying that as schools reopen, there’s a need to protect teachers as much as the students.

While there’s consensus on hybrid learning being the future, the big challenge with blended learning is that it will require a lot more teachers. Even so it is a relatively smaller challenge in the face of upskilling them. Bringing the entire Indian education system up to speed with the latest technology standards will take a revolution unlike any other, while also ensuring that no child gets left behind. 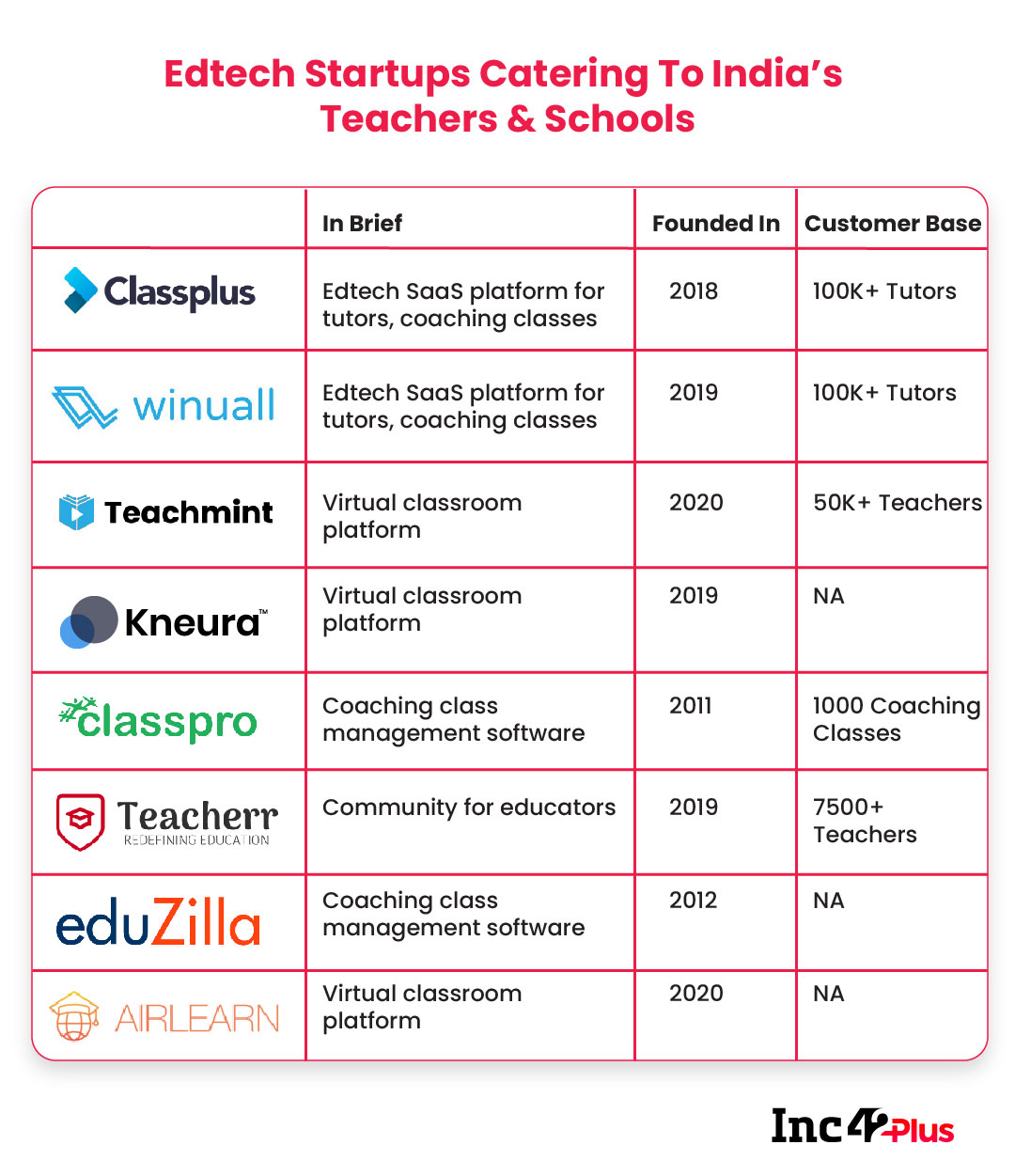 While these platforms cater to individual teachers and tutors who are going online, teachers need intensive training in how to conduct online classes in a more efficient way. Many of those we spoke to said that handholding teachers through the usage of tech platforms have solved adoption issues, but this is not possible at scale.

Technological progress is glacial in India, but in recent times, the government has accelerated efforts in many sectors. While the National Education Policy (NEP) 2020 was supposed to be a big shot in the arm for the education sector, the extent of its implementation is less than certain at this time and so far, there is no timeline on when the new system will come into place. But in other sectors, the government has been shown greater alacrity — fintech being a big example.

After UPI and the larger India Stack, now the launch of account aggregator promises to change the game when it comes to financial inclusion and lending. Account aggregator (AA) will ease the sharing of data across financial institutions and service providers. The consent-based system was only possible because of collaboration with the fintech industry, but it is an open platform for all participants.

The NEP envisions a world where India will have one teacher for every 30 students and at least one teacher per class, which would require giving special attention to employing local teachers or those with familiarity with local languages. It has also proposed a body — the  National  Educational  Technology Forum (NETF) — to enhance learning, assessment, planning, and administration of institutions through tech.

It will also facilitate decision making on the deployment and use of technology for educational institutions, state and central governments, and other stakeholders. This could very well ease technology adoption for teachers by providing a structure and framework, which is lacking at present.

India’s education system has been marooned from technology for far too long and the reliance on edtech startups to fill the gaps is far too high. The focus needs to be on empowering teachers rather than private companies. Those in power need to realise that the biggest asset of our education system — the teachers — are feeling weak and powerless.

Till our next class,
Nikhil Subramaniam