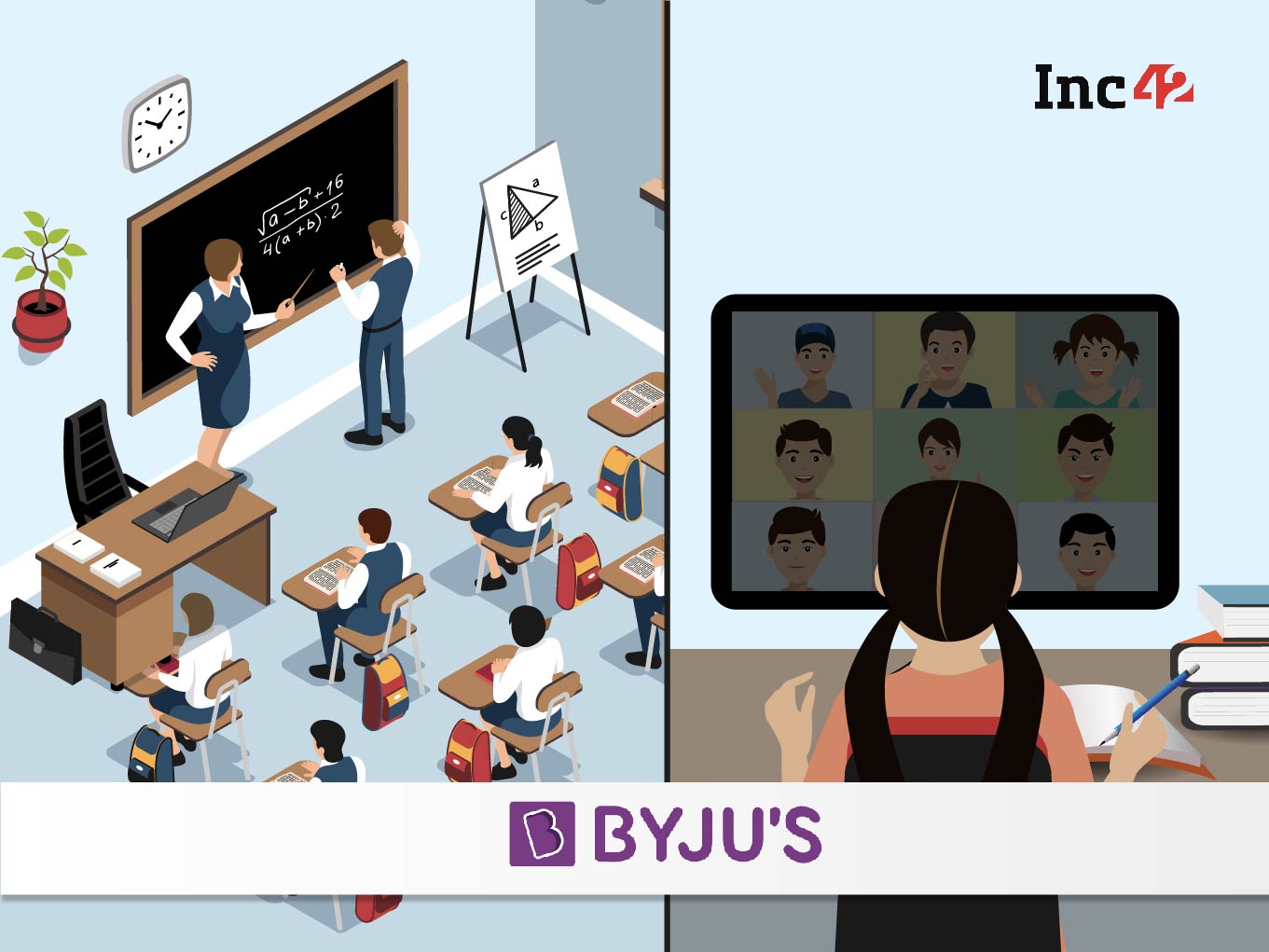 As per sources, BYJU’s has started pilots and intends to scale it pan India in the coming months

In the hybrid model, students can visit ‘BYJU’s Learning Centre’ and get lessons both through video conferencing and in-person

The development comes few days after BYJU’s mopped up $296 Mn in a Series F round from Oxshott Venture Fund, Edelweiss, Verition Fund, MarketX Ventures, among others

Edtech decacorn BYJU’s is piloting a new hybrid model for its 100 Mn users. The Bengaluru-based unicorn is testing a new model where students can visit physical/offline education centres for classes.

People aware of the matter requesting anonymity said, “These centres (BYJU’s offline centres) will offer a hybrid learning experience to students. Pilots have started and BYJU’s intends to scale it up nationally.”

These centres will be called BYJU’S Learning Centre. According to an Inc42 source privy to the development said that in the new model, students (6-10th standard) will be given lessons through video conferencing and in some cases, teachers will be present in-person to impart knowledge to the students. The model is similar to what BYJU’s owned Aakash plans to implement.

The company will be initially focussing on — Biology, Chemistry, Physics and Mathematics.

According to several job postings, the company is looking to hire both business development executives as well as the teachers pan India.

The development comes five months after – BYJU’s acquired Aakash – a 33-year-old chain of physical coaching centres for competitive exams such as NEET and IIT-JEE.

Last month, Abhishek Maheshwari, CEO of Aakash Educational Services in an interview said that Aakash is transforming into a hybrid edtech firm and will be launching 106 new centres in the next five months.

When BYJU’s acquired Aakash, Byju Raveendran had said, “The future of learning is hybrid and this (BYJU’s and Aakash) union will bring together the best of offline and online learning, as we combine our expertise to create impactful experiences for students.”

The development comes a couple of weeks after Inc42 exclusively reported that BYJU’s bagged $296 Mn in Series F round from Oxshott Venture Fund, Edelweiss, Verition Fund, MarketX Ventures, among others.

The investment round seemed to be part of a $1 Bn round that BYJU’s is in talks to raise before it gets itself on the stock exchange.

Earlier in September, the edtech startup has also mopped up $150 Mn in an investment round led by Asmaan Ventures and ARK Ncore at $16.8 Bn valuation. Back then BYJU’s had allotted 38,705 Series F preference shares to Asmaan Ventures and 6,045 Series F preference shares (each share costing INR 2,85,072) to Mirae Asset and ARK Ncore.

The edtech giant has also been making headlines as it has been on an acquisition spree. BYJU’s has already spent $2.6 Bn for acquiring nine edtech startups in 2021. The latest of the edtech acquisitions was of a US-based coding startup Tynker for $200 Mn.

Sources have also informed BYJU’s that it is eyeing an IPO which would value the company at around $40 Bn-$45 Bn. The edtech giant is likely to file its DRHP in the next year.

In the last 18 months, the Indian edtech sector has witnessed massive growth. With a series of nationwide lockdowns and schools and colleges being shut to prevent the spread of the contentious virus, edtech startups witnessed a significant increase in their user base.