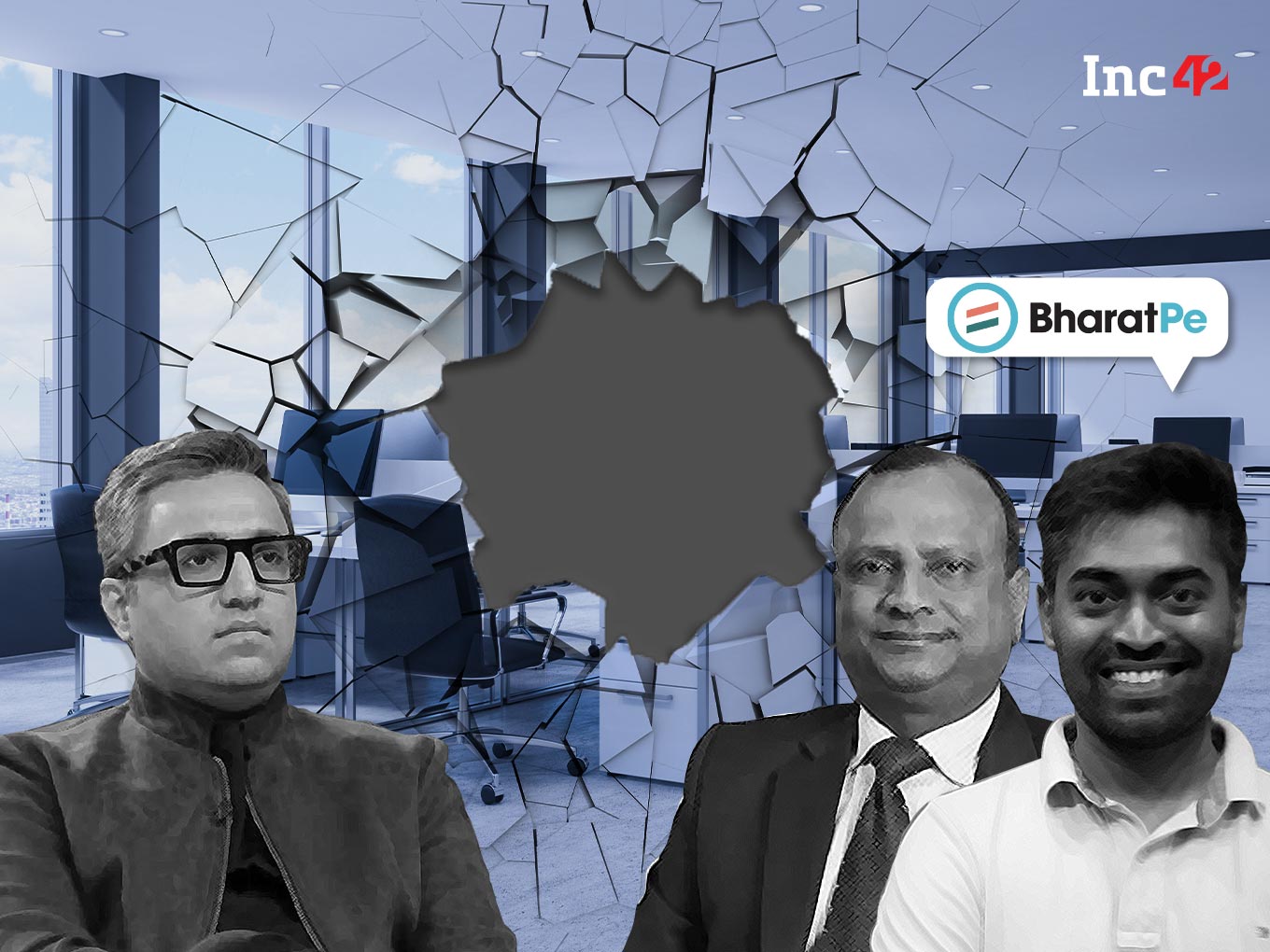 Grover alleges cofounder Koladiya phoned him and used foul language against him, adding that the call originated from the Board Chairman’s home.

MD Grover has been in the centre of a storm ever since a preliminary report flagged payments to non-existent vendors and consultants.

The boardroom drama over the reigns of fintech major BharatPe shows no signs of abating. In a dramatic escalation of hostilities, beleaguered cofounder and Managing Director, Ashneer Grover, has now accused board Chairman, Rajnish Kumar and cofounder, Bhavik Koladiya, of attempting parallel negotiations amidst the ongoing feud.

Hitting out at Koladiya, Grover accused him of using foul language. Add to that, the embattled cofounder also accused Kumar of being partisan in the ongoing feud.

Quoting a letter written by Ashneer Grover to the company board, a report by Moneycontrol said that Koladiya allegedly called Grover to set up a meeting. The letter further added that this was done without specifying the agenda of the said meeting.

The BharatPe MD also alleged that the call originated from Kumar’s Gurugram residence. He said, “The call was made from Rajnish Kumar’s residence in Ambience Island, Gurugram. I was informed on the said call that the two of them wanted to meet me to discuss some issues and that I should travel to Gurugram for the said meeting.”

Grover also claimed that, when he refused to attend the meeting, Koladiya turned abusive. He said, “Upon such instigation, I told Mr Koladiya that if he wanted to discuss things in such a fashion then I was not interested in talking to him.”

Training his guns at Kumar, Grover called the ongoing Governance Review as being ‘riddled with premeditation, bias and prejudice.’

He also added that,“Mr Kumar’s involvement also completely erodes any semblance of non-partisan supervision by him as has been envisaged qua his role in the Review Committee.”

The letter also stated that “The manner in which Mr Koladiya, who is neither a Member of the Board nor an employee of the Company, is being involved by Mr Rajnish Kumar in the communications with me also fortifies my concerns that the Company has been willfully leaking confidential information as regards the present dispute to third parties.”

Interestingly, Grover, in his letter, referred to Koladiya as an ‘independent contractor’ working with the IT team of the fintech startup. It’s important to note that Koladiya’s association with the company was also a topic of debate when the entire BharatPe case blew up.

Koladiya was convicted in the US in 2013 in a credit card fraud case. Initially he along with Shashvat Nakrani had cofounded BharatPe and they were later joined in by Ashneer Grover as a cofounder. Another important point to be noted here is that Koladiya doesn’t hold any share in the company directly, however, according to an Inc42 source, Grover and Nakrani are holding his equity for him.

Retorting back, Rajnish Kumar, rubbished the charges saying that he was not party to the conversation between Grover and Koladiya. He was quoted by Moneycontrol as saying, “Should the board members have any doubts about my impartiality in the matter, I have no intention to continue and can’t tolerate this type of mudslinging by anyone.”

He also told the Board that, “…the communication from the Company should be directed to me through the Company, the Board, or through its attorneys. I do not appreciate the tone and tenor of the parallel negotiations being directed to me on behalf of the Company and/or its Board Members through such unrelated third parties.”

The former State Bank Of India (SBI) Chairman, Kumar, had joined BharatPe in October 2021 as its Chairman.

Ashneer Grover Vs BharatPe: The Battle Goes On

The power struggle ensued after BharatPe roped in Alvarez & Marsal (A&M) to conduct a governance review of the company. The content of the reports were later leaked, prompting a war of words between BharatPe’s Head of Controls, Madhuri Jain and the Board.

It is pertinent to mention that Jain is the wife of Ashneer Grover. Last week, Jain had written to the company board alleging that the Board had accepted her resignation – something which she claims to have never tendered.

Training his guns at Kumar, Grover called the ongoing Governance Review as being ‘riddled with premeditation, bias and prejudice.’

As the controversy unravelled, Grover took a leave of absence till March-end amid backlash regarding his abusive language to a Kotak employee, toxic culture at BharatPe, and brash behaviour. Jain too was sent on leave, but then on January 22, it came to fore that BharatPe had terminated Jain.

Not the one to hold back, Grover reportedly filed an arbitration plea in the Singapore International Arbitration Centre (SIAC). He apparently has sought exemption from any future legal liabilities in the ongoing settlement discussions with BharatPe.

Employees Caught In The Middle

Barely a year ago, the situation was altogether different at the fintech company. Amid the startup wars, BharatPe had splurged a lot, spending money from its coffers to retain talent.

But, as MD Ashneer Grover and CEO Suhail Sameer battle it out in the open, the tables seem to have turned. A recent report had stated that over 400 employees from the fintech company were said to be looking for a way out of the startup.

With the upper management in dire straits trying to control the fallout of the boardroom drama, employees seem to be in a panic. A sense of uncertainty seems to have compounded the situation as many signs pointing to a deeper unsettling storm brewing in at BharatPe.

Founded in 2018, BharatPe offers a range of fintech products that cater to small merchants and also helps them accept digital payments. The Delhi-based fintech startup is valued at over $2.8 Bn and is backed by marquee investors like Sequoia Capital India, Coatue Management and Ribbit Capital.

While external consultants continue their forensic investigation into the company’s practices, it is only a matter of days before the report comes out. While the public fallout has been bad for the company’s image, the drama shows no signs of slowing down.