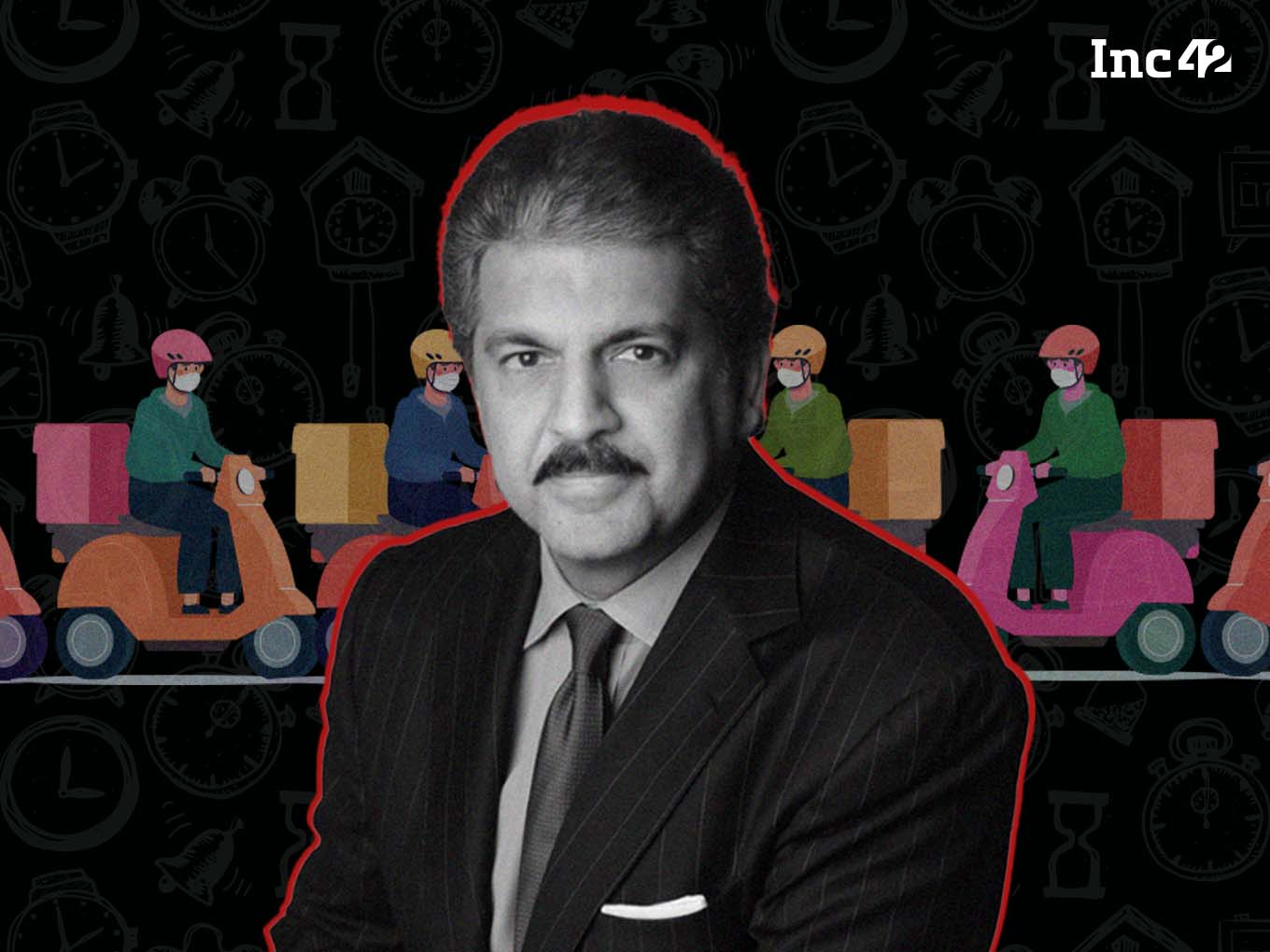 Aadit Palicha responded to Mahindra’s retweet noting down the math of how Zepto works, to which the latter said that it was fair to know the other side of the story

The altercation sparked a long-pending conversation between two sides of the internet - the one for-qcommerce and those, who think it is an unnecessary good

When Indian consumers have almost embraced ecommerce in their day-to-day lives, quick commerce or qcommerce has caught the fancy of urban consumers. We have the likes of Blinkit, Zepto, Swiggy Instamart, and Dunzo in our disposable-but how does the delivery model work? How necessary is it to receive orders within 10 minutes or what stress is it giving to these businesses and their delivery agents?

Surely, we’ve plenty of questions! Yet, one common thread is that the questions around the validity of such quick commerce models have been debated over and over again and this time none other than the maestro Anand Mahindra joined the hot discussion.

The safety of delivery partners on the road has been the most talked-about topic among all. Many internet users have noted down their experiences with the quick commerce apps, saying that the drivers who delivered to them were under stress, have been under minor accidents over speedy and rash driving, faced possible penalisation over delivery lags and over-the-top targets.

So, when Pramesh CS, Director of Tata Memorial Hospital called 10-minute grocery deliveries ‘inhuman’ for the delivery agents on Twitter, Mahindra Group Chairman Anand Mahindra retweeted his tweet and agreed with the sentiment.

His comment sparked a debate among netizens over the merits and demerits of the quick commerce segment. Zepto founder Aadit Palicha also responded to Mahindra’s tweet sharing the math of how Zepto works. 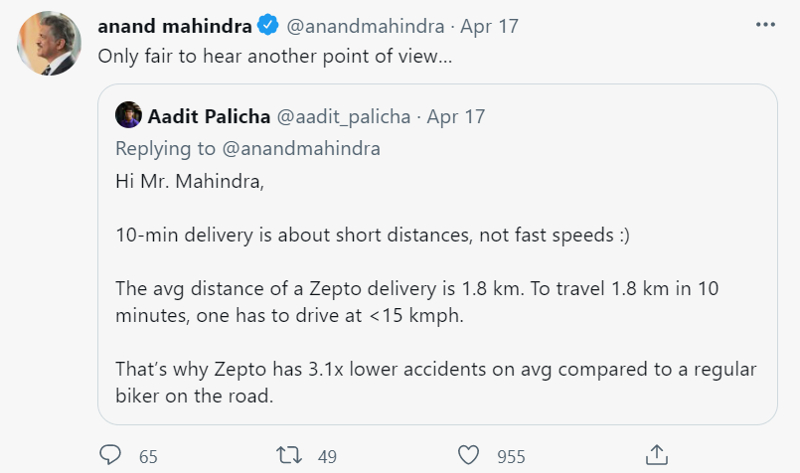 He claimed that at Zepto, 10-minute delivery is possible when the distance is less than 2 km and that the science of quick delivery was not based on speed but the distance from the delivery point. Mahindra also responded to his response, saying that it was fair to hear the other side of the story.

Startups That Have Been Under The Heat

Valued at $700 Mn currently, the quick commerce industry has newer models from Zomato and Ola besides the ones mentioned above. Further, Zomato founder Deepinder Goyal recently introduced the company’s 10-minute food delivery programme, Zomato Instant. The fulfilment of the quick delivery promise would rely on a dense finishing stations’ network, which will be located close to high-demand customer neighbourhoods.

The announcement of Zomato Instant revoked the safety question as well the pay disparity, despite drivers being subjected to taking more risks, bending the traffic rules and riding against the clock.

Following this, a petition has also been started on Change.org against the quick commerce model with the tagline ‘I Can Wait For My Groceries’ and the idea that hyperlocal delivery startups have ‘gamified’ the lives of delivery workers.

Last year, when Grofers introduced the ‘magic-like’ model, the rebranded company BlinkIt invited flak over the model and clarified that the company only delivers to areas within a 2 km radius of a grocery store.

Goyal, too, had to clarify that Zomato Instant would not aim to endanger driver safety lives. It mentioned that neither the drivers were punished if they were unable to deliver within the promised time, nor did it ask the drivers to bend rules.

Apart from its controversial model on the outside, Zepto is also facing heat on the inside, as one of its cofounders Ansh Nanda has filed an FIR alleging that the company cofounders Aadit Palicha and Kaivalya Vohra ousted him from the company.

One of Zepto’s investors Nexus Venture Partners is also under the radar of the startup ecosystem over its due diligence, as the VC has invested in multiple companies after the cofounders took each other to the court.

Asking The Important Question – Is It A Necessity?

Interestingly, while the term ‘fast’ may, for the qcommerce companies, be ‘a zero-sum game’, as BlinkIt founder Albinder Dhindsa had put it previously, the real-life picture is not so mathematically rosy. Palicha’s comment, too, lacks empathy and any technology background, since the model is entirely dependent on one constant i.e. distance, and no variables (very much unlike real-life scenarios).

Many companies have debated that hyperlocal commerce gives a boost to the local grocery stores and these startups only provide delivery in ‘deliverable’ areas. That is, one more thing among Zepto, BlinkIt, Swiggy Instamart, Dunzo and now Ola with Ola Dash others that is common is that these startups offer limited ready-to-throw-in-a-bag-and-deliver items.

But, unlike stated, many factors contribute to the ‘10-minute-delivery’ feature including the peak times in certain areas and signals, climate conditions, road conditions, and vehicle breakdowns, among others.

Apart from these, drivers also miss out on completing their targets if they do not deliver on time, meaning an indirect penalisation that a low-wage gig economy worker, who lives paycheck to paycheck, may not take nicely. Thus, he takes shortcuts i.e. goes in the wrong lanes, breaks traffic rules, parking illegally, etc.

Another point that many reports have outlined is that India lacks the tipping culture prominent in countries like the US and, on the other hand, qcommerce startups have not necessarily increased the delivery payout for the workers; leaving these workers to earn more by completing more deliveries, i.e. driving faster and taking more orders.

While some have accepted that the delivery economics calls for a change, many netizens are unimpressed by the responses that these companies have shared – retorting that quick commerce is not only unnecessary but also unkind. But only time will tell how the qcommerce scenario pans out.