Other Bollywood celebrities that have ventured into the NFT Bandwagon include Amitabh Bachchan, Sunny Leone and most recently, Kunal Kapoor

BollyCoin is slated to launch in December 2021, with a presale & auction for Private investors that will go live sometime in late October 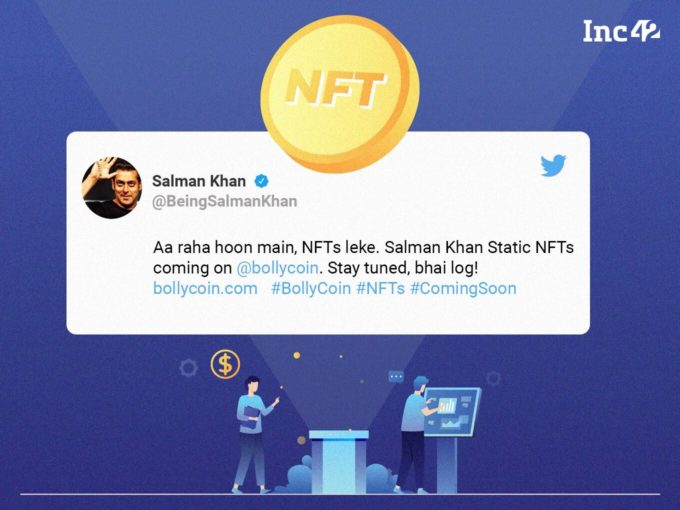 Actor Salman Khan will roll out his digital collectibles in the form of non-fungible tokens (NFT) through BollyCoin, an ethereum-based marketplace.

BollyCoin is slated to launch in December 2021, and plans to form similar partnerships with more production houses, the company said in a statement.

The NFT Marketplace will also consist of loyalty programs, a native token called BollyCoin token, and a presale & auction for Private investors that will go live sometime in late October.

With Bollywood celebrities like Amitabh Bachchan and Sunny Leone entering the fray, the global NFT momentum has suddenly caught the attention of the commoners on the street in the country. Recently, actor Kunal Kapoor also invested in white-label SaaS-based NFT Marketplace, NFTically.

Talking about the NFT Marketplaces (a place where users can buy and sell NFTs) during The Crypto Summit hosted by Inc42, Melvin Thambi, an NFT artist and cofounder of NFTMalayali, stated that the NFT phenomenon has helped him connect with other artists around the world much faster than Facebook-owned Instagram that only resulted in likes.

An NFT (Non-Fungible Token) is a digital asset that represents real-world objects like art, music, in-game items and videos. It can be bought and sold online, frequently with cryptocurrency.

It is generally encoded with the same underlying software as many cryptos – Blockchain. Once an NFT is sold, the creator receives an amount in cryptocurrency, and s/he also gets a commission on each subsequent sale of the NFT.

The Blockchain phenomenon has already recorded around $2.5 Bn in sales globally by H1 CY21. On October 13 alone, 10K+ NFTs transactions worth $39 Mn been recorded.

Some NFT platforms that have launched in India include WazirX NFT Marketplace, BeyondLife.club, Wall.app, Terrain.art, and OKEx’s DeFi Hub.

Currently, NFT use cases include digital art, digital collectibles, gaming, e-ticketing, digitisation of real estate on the blockchain, equity financing in the form of private rounds, records’ maintenance and certifications.

Amid the rising adoption of NFTs, to enhance the liquidity of the marketplaces, Strip Finance, recently raised a seed and private round of INR 11 Cr.